They won’t need the hair of the dog! Hirsute Germans show off their amazing beards as Oktoberfest swings into full gear

The opening weekend of the 186th Oktoberfest celebration has now entered into ts second day in Munich, Germany.

Attendees donned traditional Bavarian clothing including dirndls for women and lederhosen for men along – many of whom were sporting an array of incredibly bushy beards as part of the costume parade.

The annual event was kicked off yesterday by Mayor Dieter Reiter who inserted the tap in the first keg with two blows of a hammer before handing the first litre to Bavarian governor Markus Soeder.

Around six million beer lovers from around the world are expected to have attended the festival before it ends on October 6.

The weekend is being policed by around 600 officers and security guards as well as 50 doctors.

The annual Oktoberfest celebration has now entered its second day in Munich. People donned traditional clothing and a whole host of men took the opportunity to show off their beards including one who sported a brooch depicting King Ludwig II of Bavaria 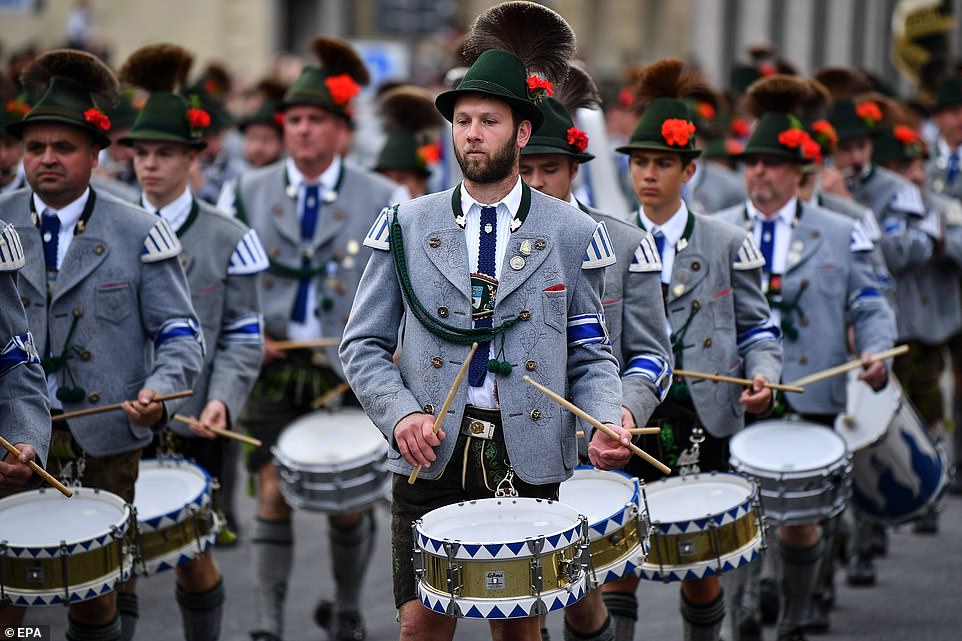 A costume parade took place at the beer festival, which is now in its 186th year, as a band joined those marching through the streets 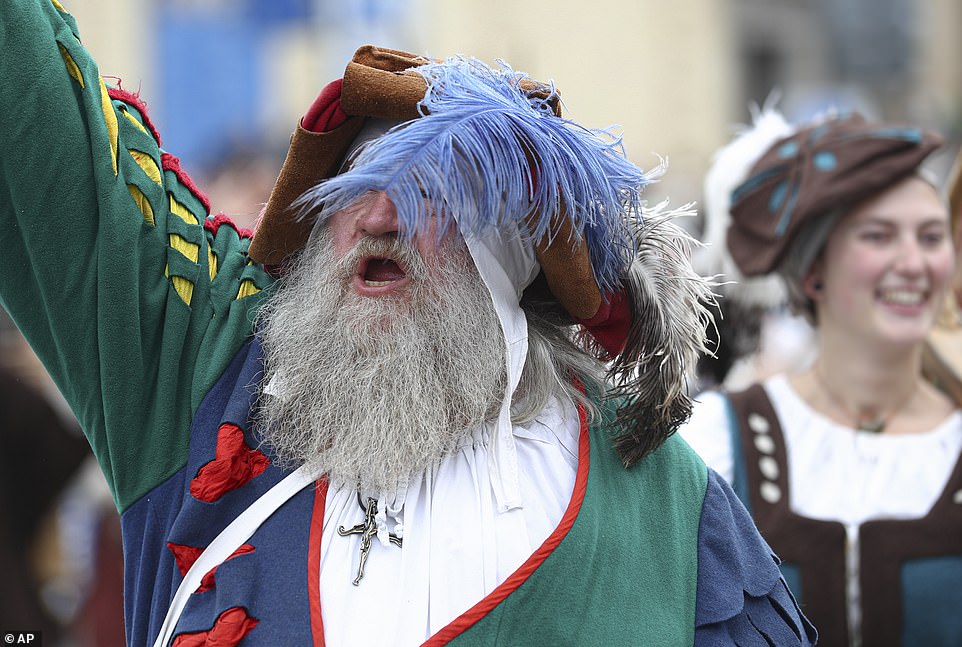 The parade that is a tradition in the world’s biggest beer festival crossed over to the Theresienwiese fair grounds. Here one gentleman sports a bushy beard with billowing feathers in his cap 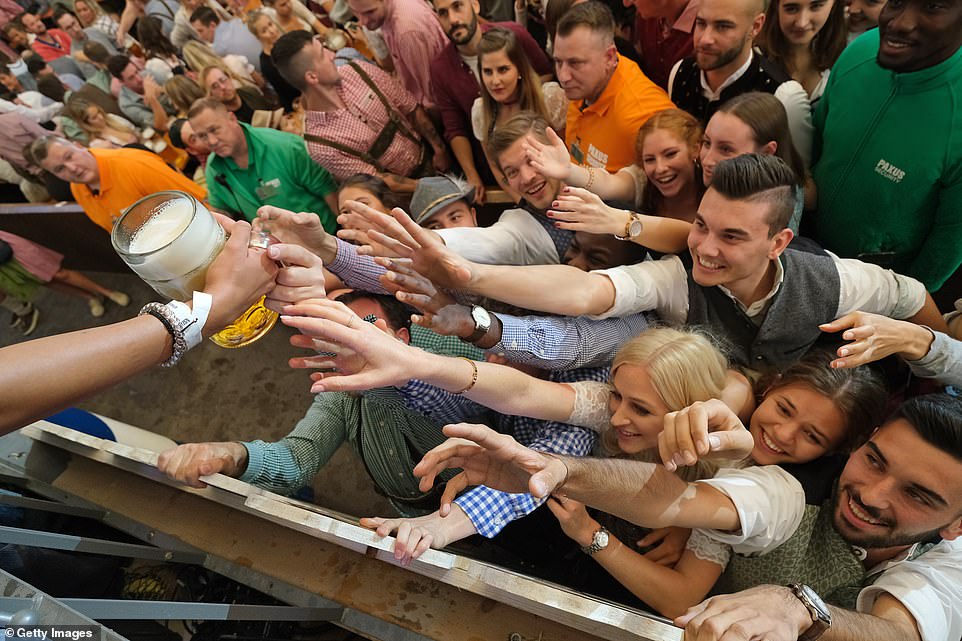 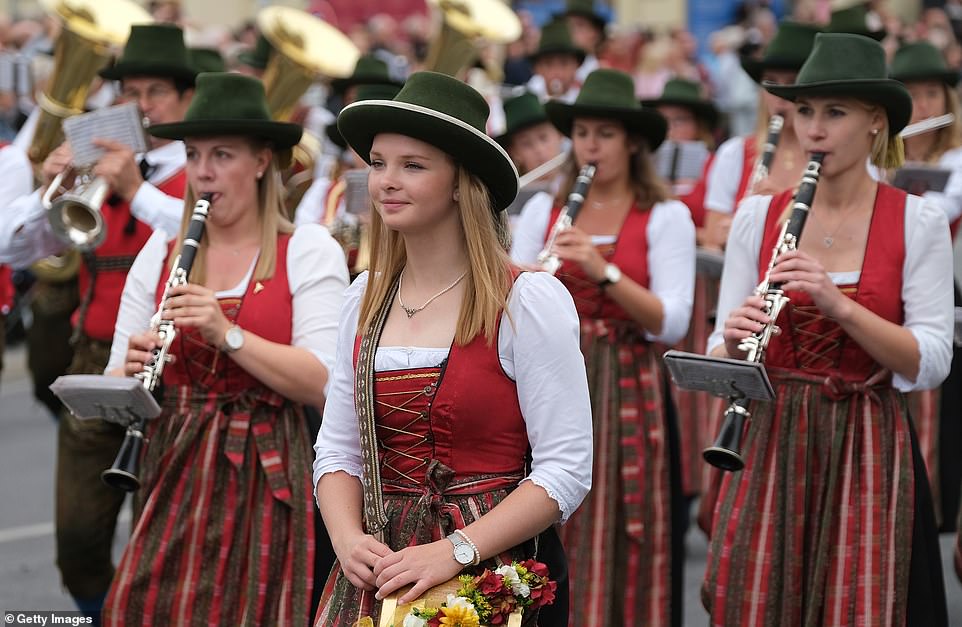 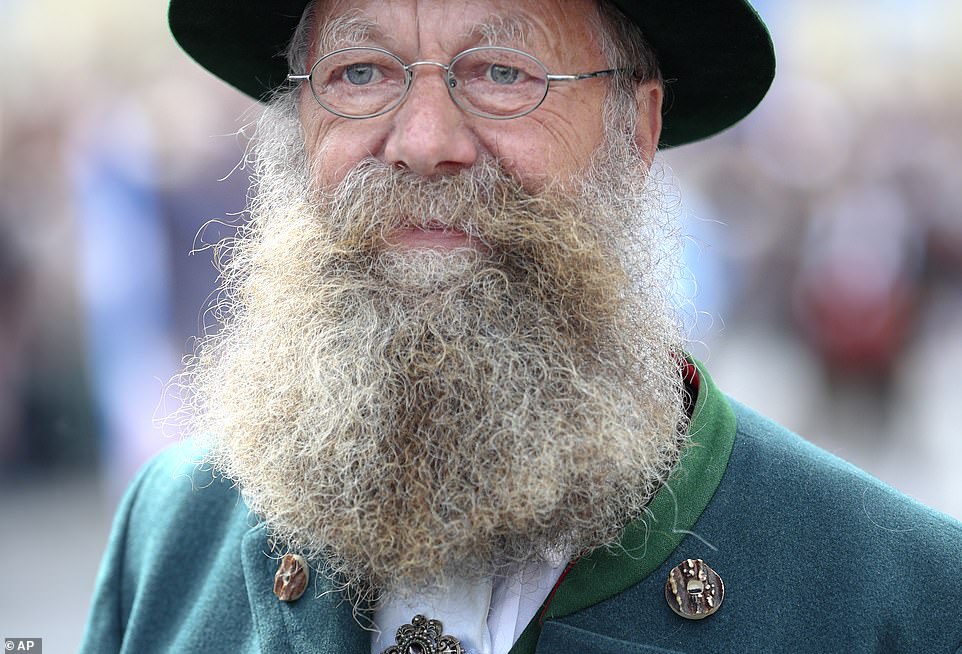 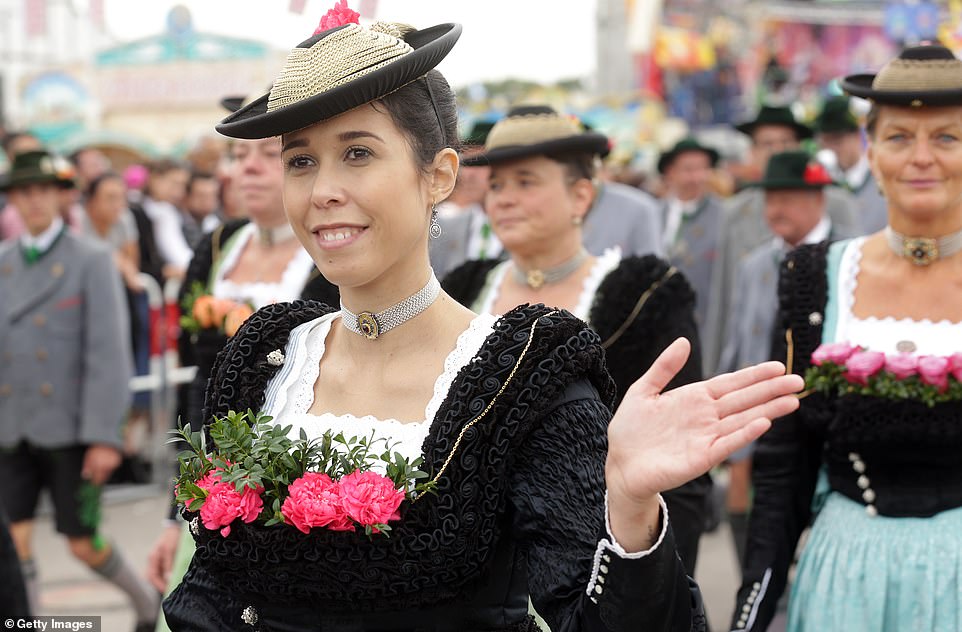 The event is being policed by around 600 officers and security guards as well as 50 doctors. Here, women adorned their traditional dress with bright coloured flowers 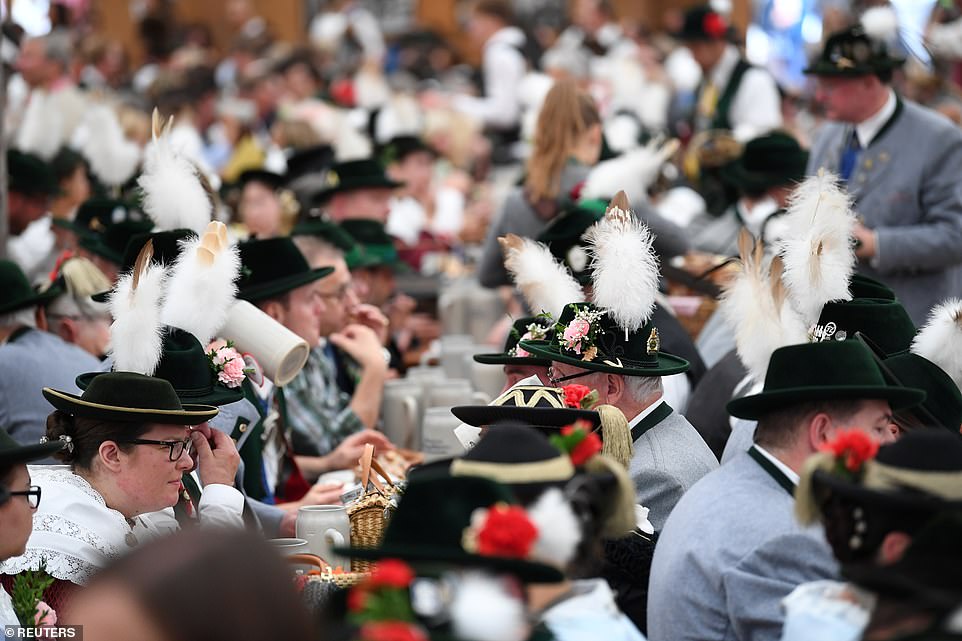 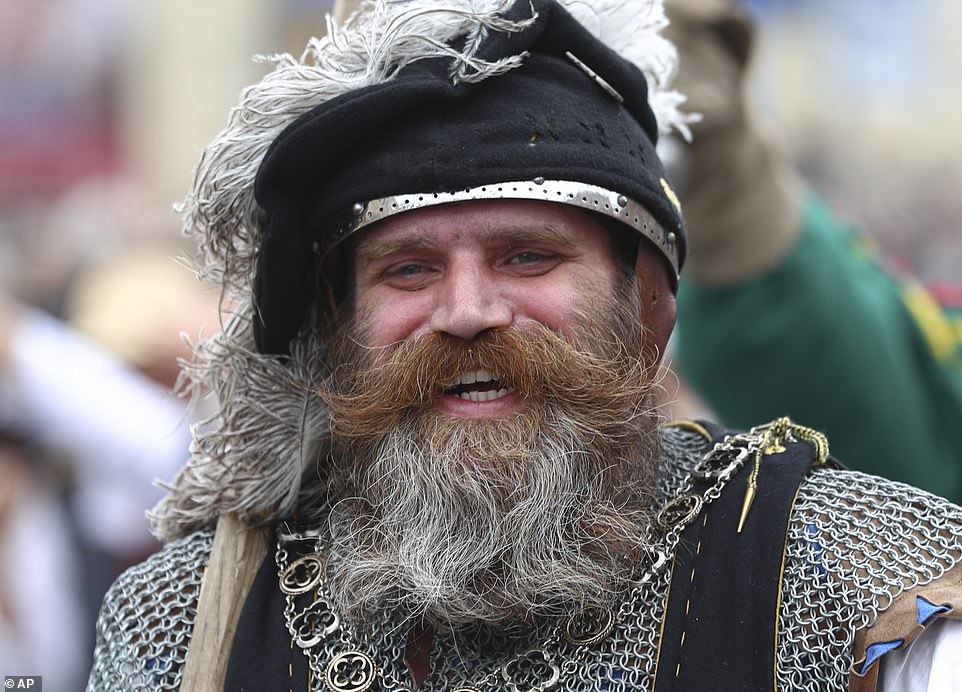 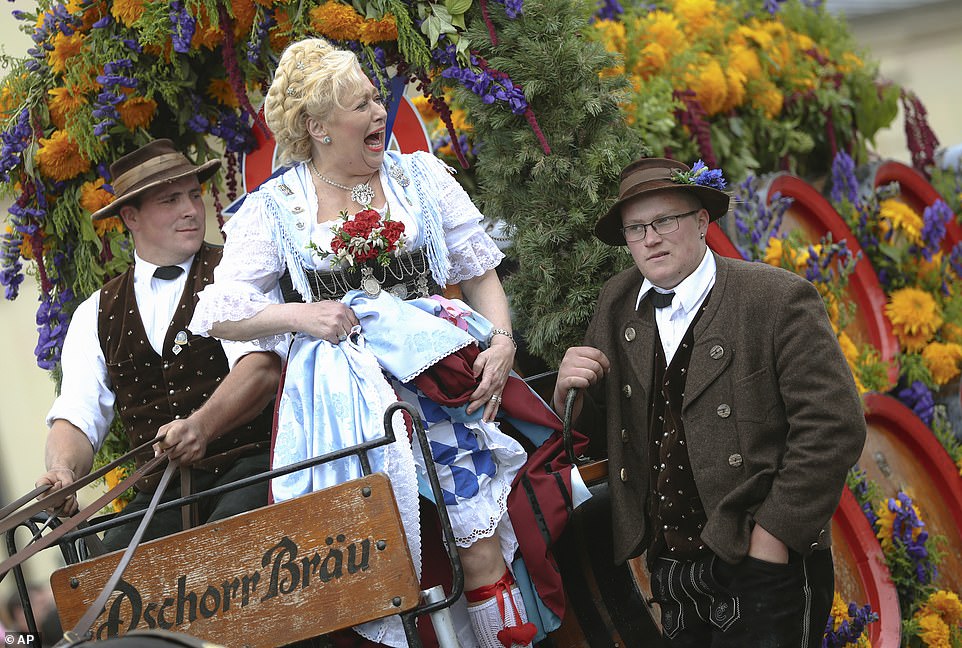 Many rode along in extravagant carriages and looked across to the crowds of people that had gathered. This woman shouted across to spectators as she was accompanied by two men 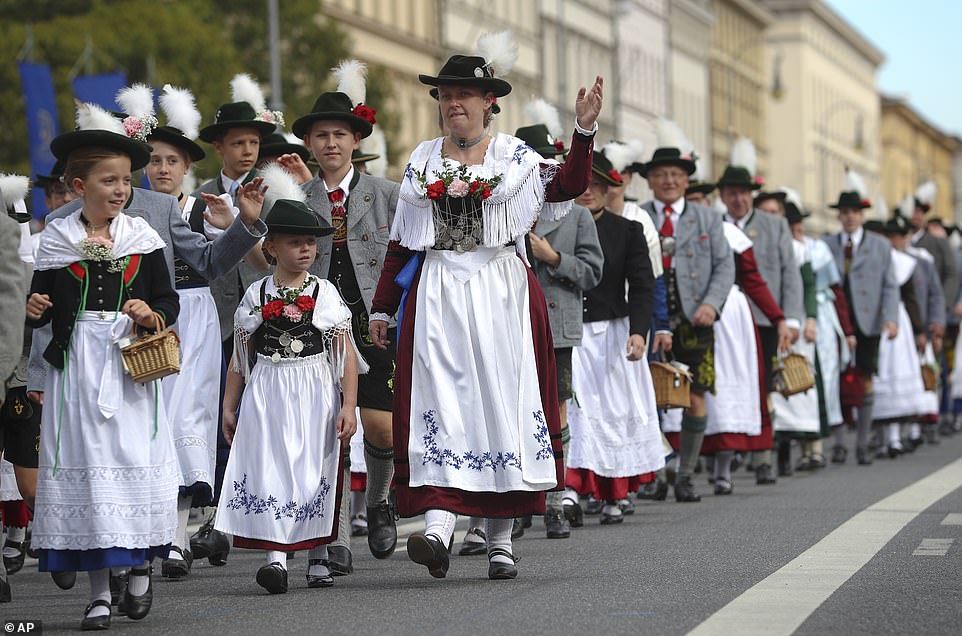 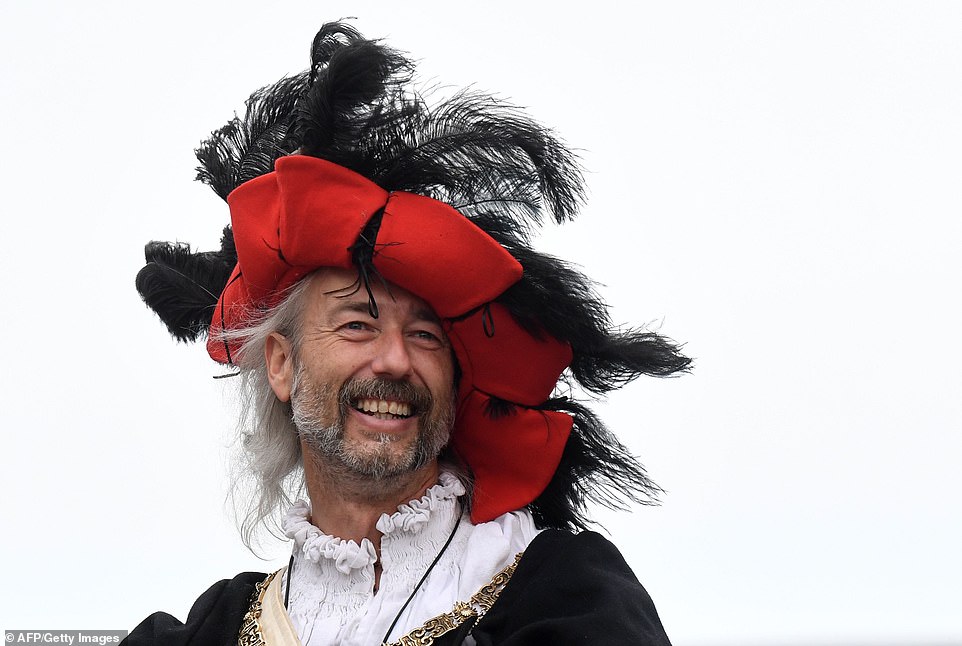 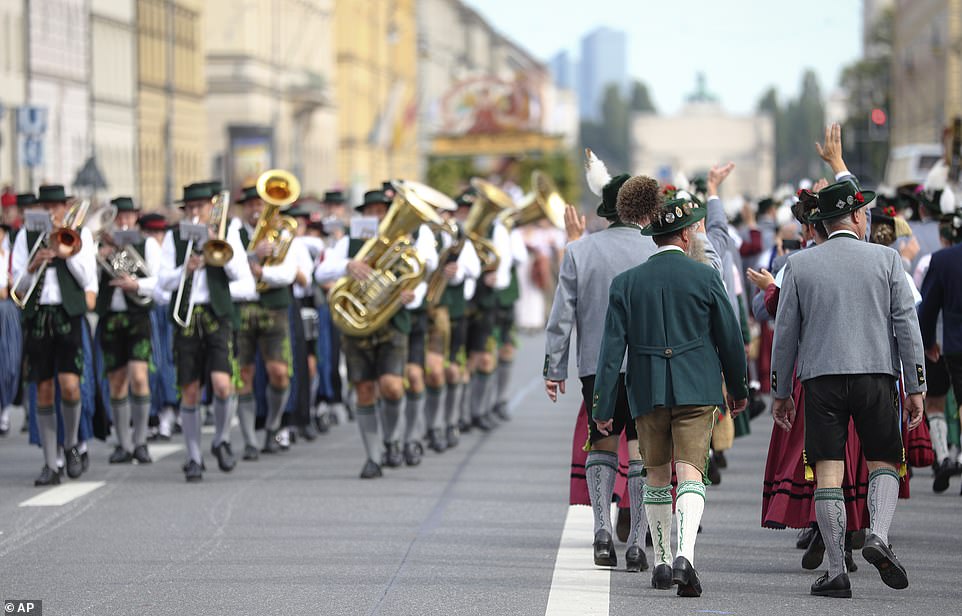 A brass band provided a musical accompaniment to the parade and played a range of traditional, upbeat, folk songs 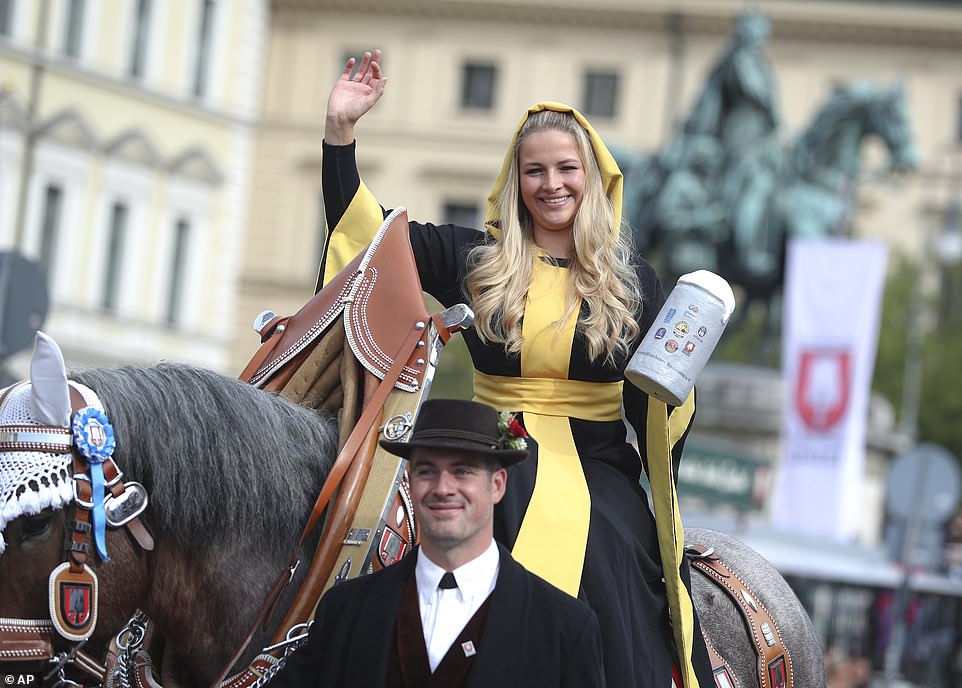 Another participant, who had fashioned her own version of a one-litre beer jug, rode through the crowds on a horse as she waved to those watching on 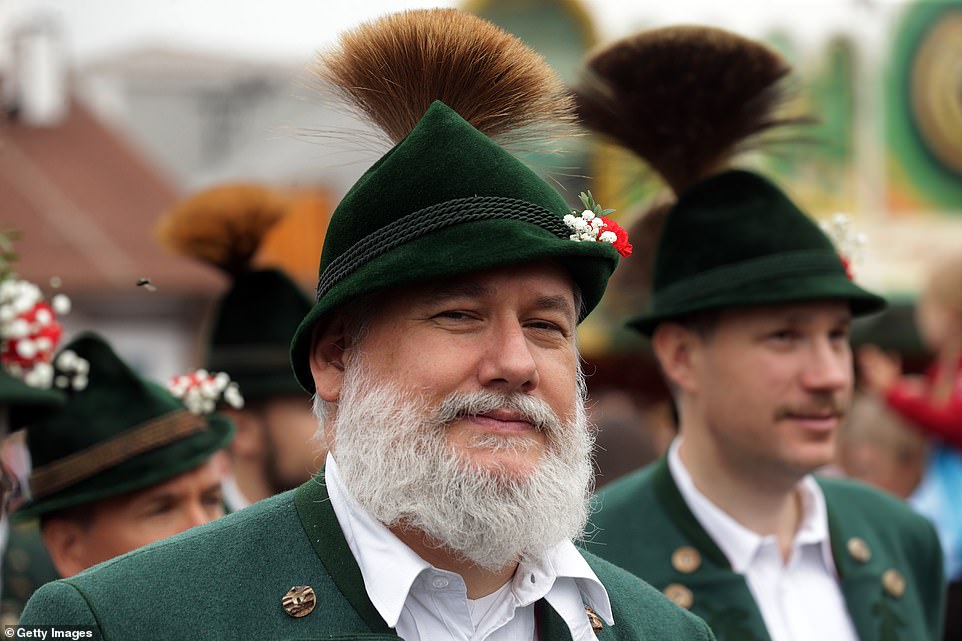 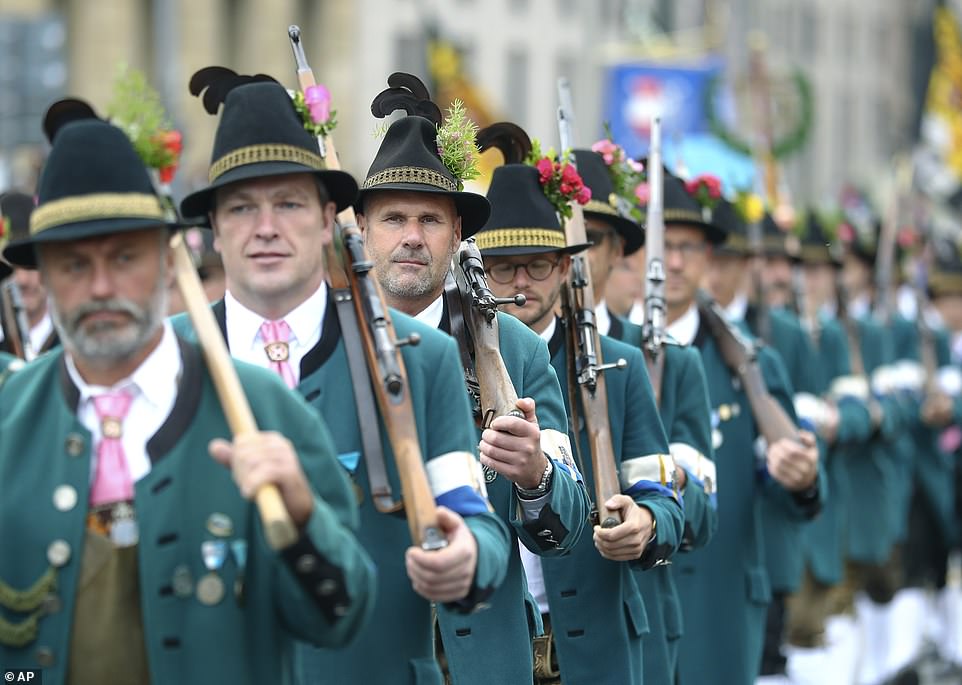 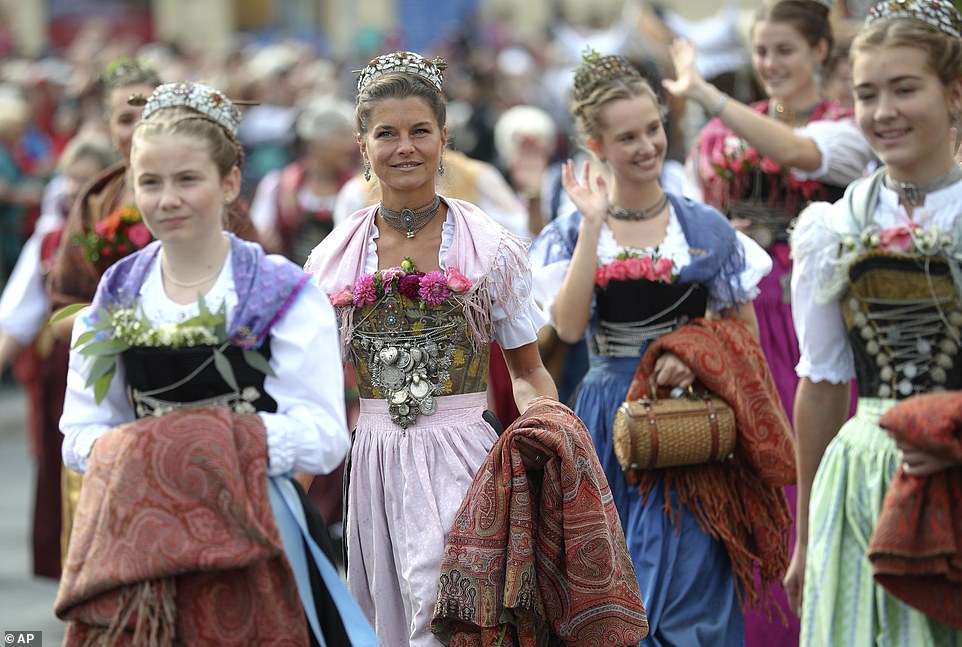 Women accessorised the traditional dirndl with flowers, jewellery and a selection of pendents and brooches. They carried blankets and small wicker bags in their hands 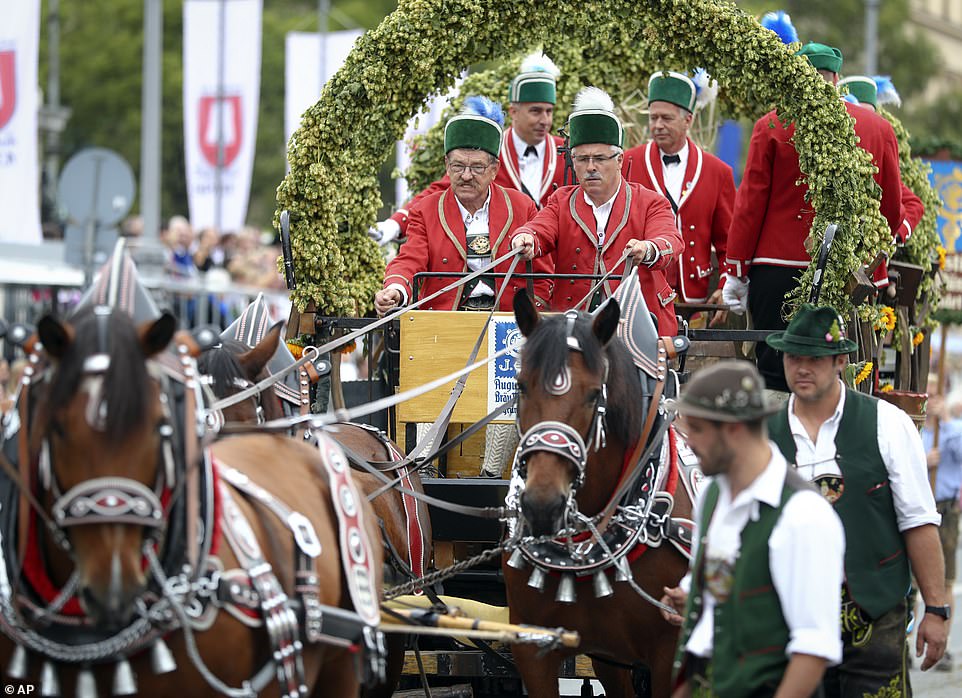 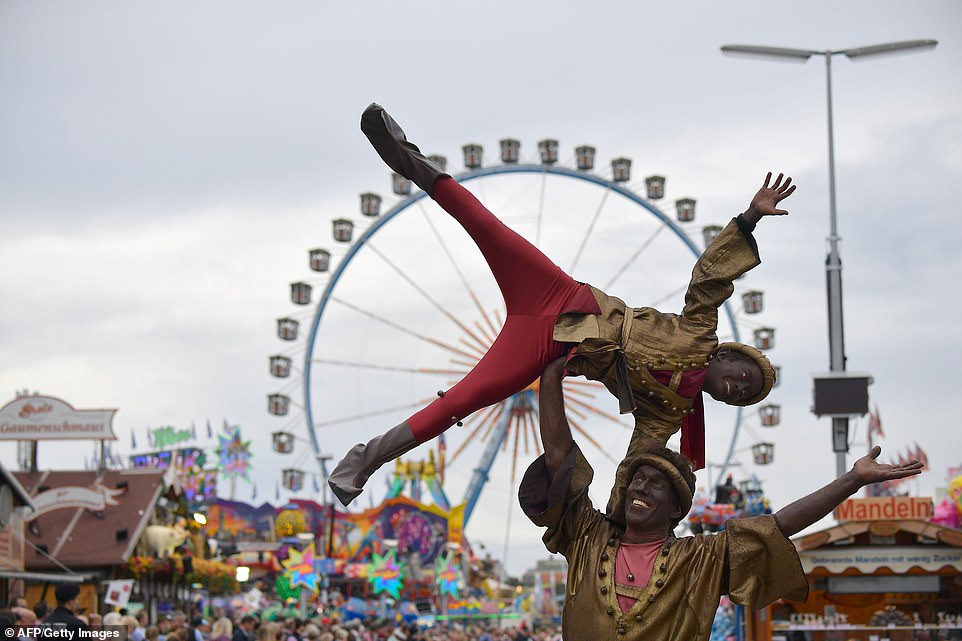 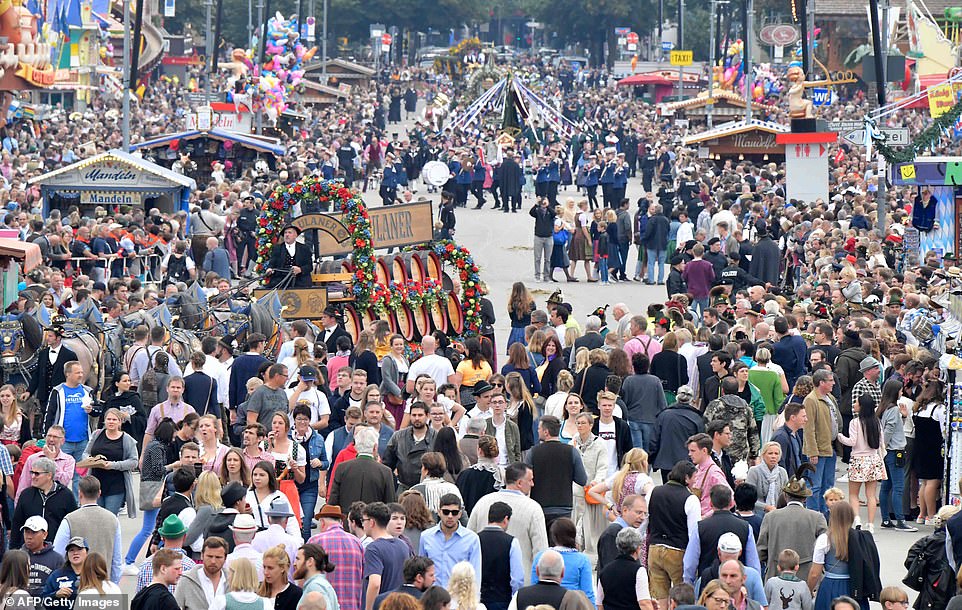 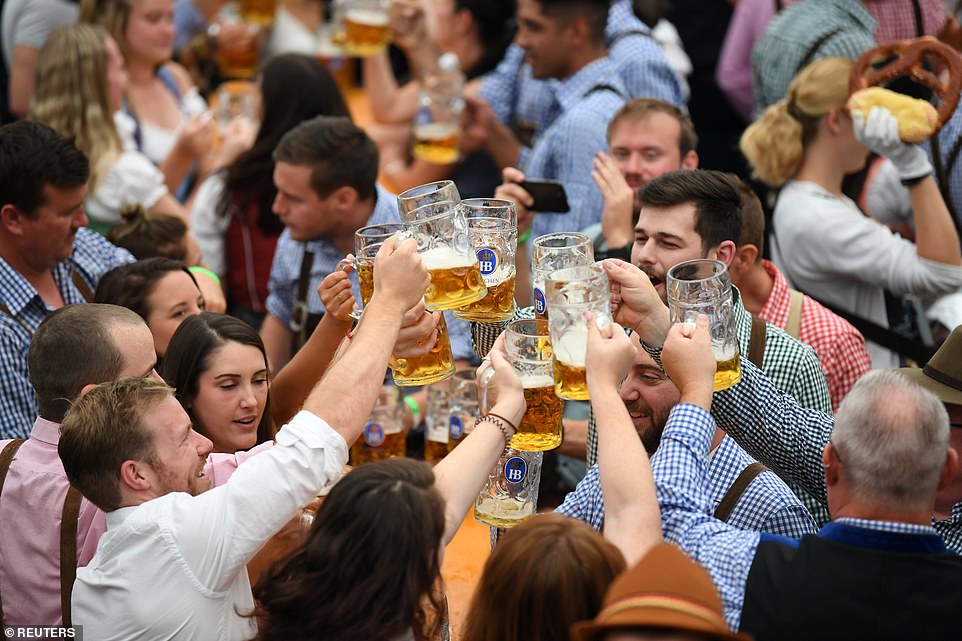 Beer prices have increased again this year with a litre jug now costing up to 11.80 euros (£10.42) which is an increase of 30 cent as group celebrate together 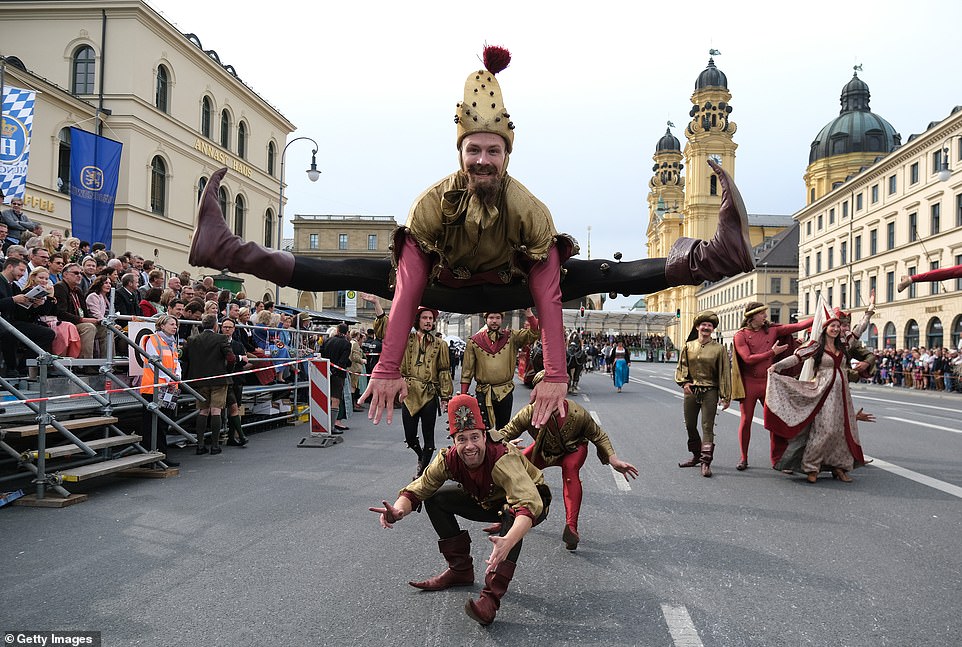 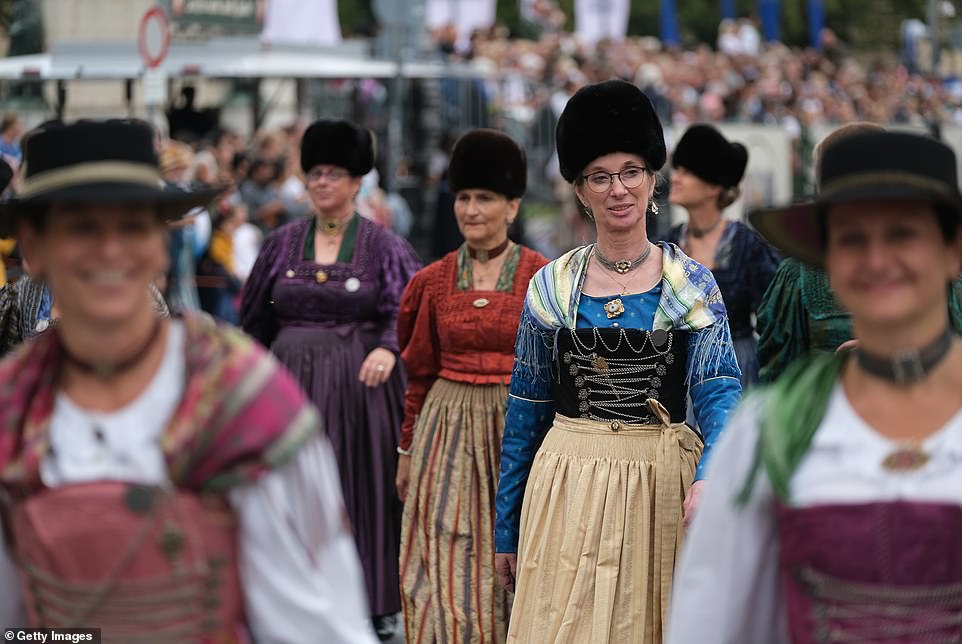 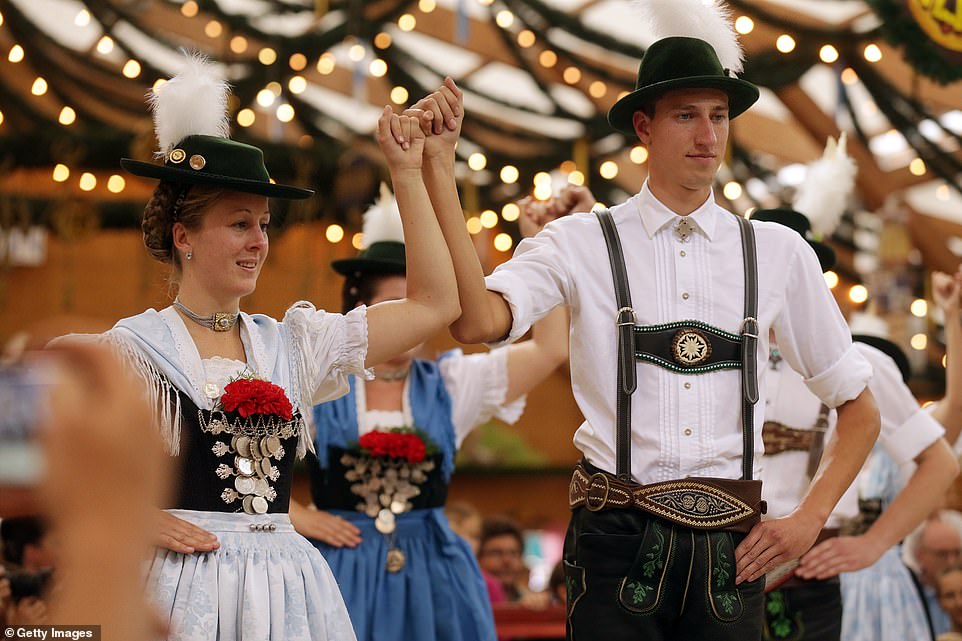 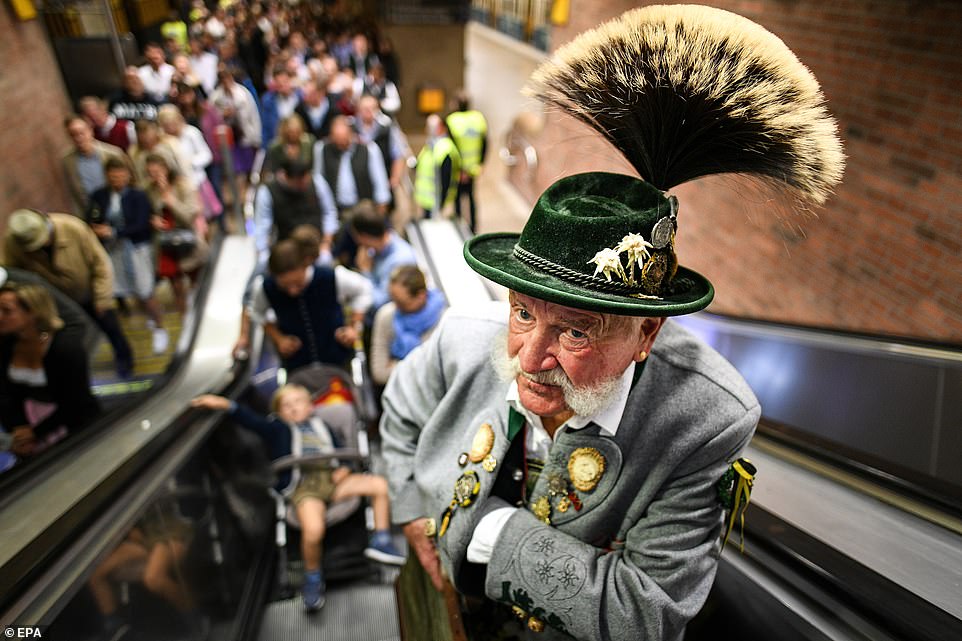 A Bavarian elder in traditional clothing joined the crowds using the escalators to reach the event. The popularity of the event apparently caused overcrowding in beer tents when the gates first opened yesterday 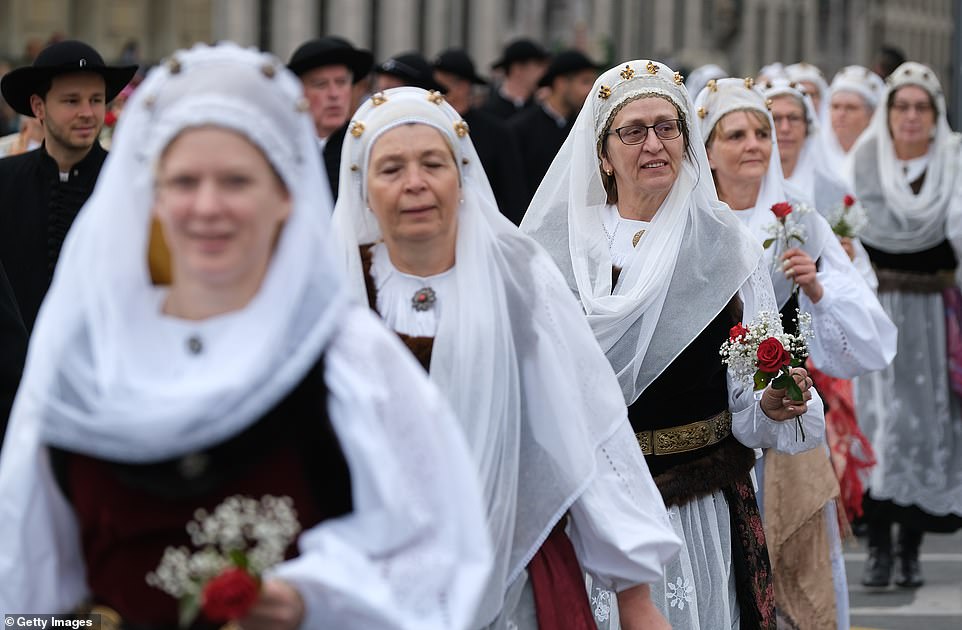 Women who had draped their heads in traditional white veils joined the celebrations. The popular festival has been cancelled 24 times but usually only in the face of war or cholera outbreaks 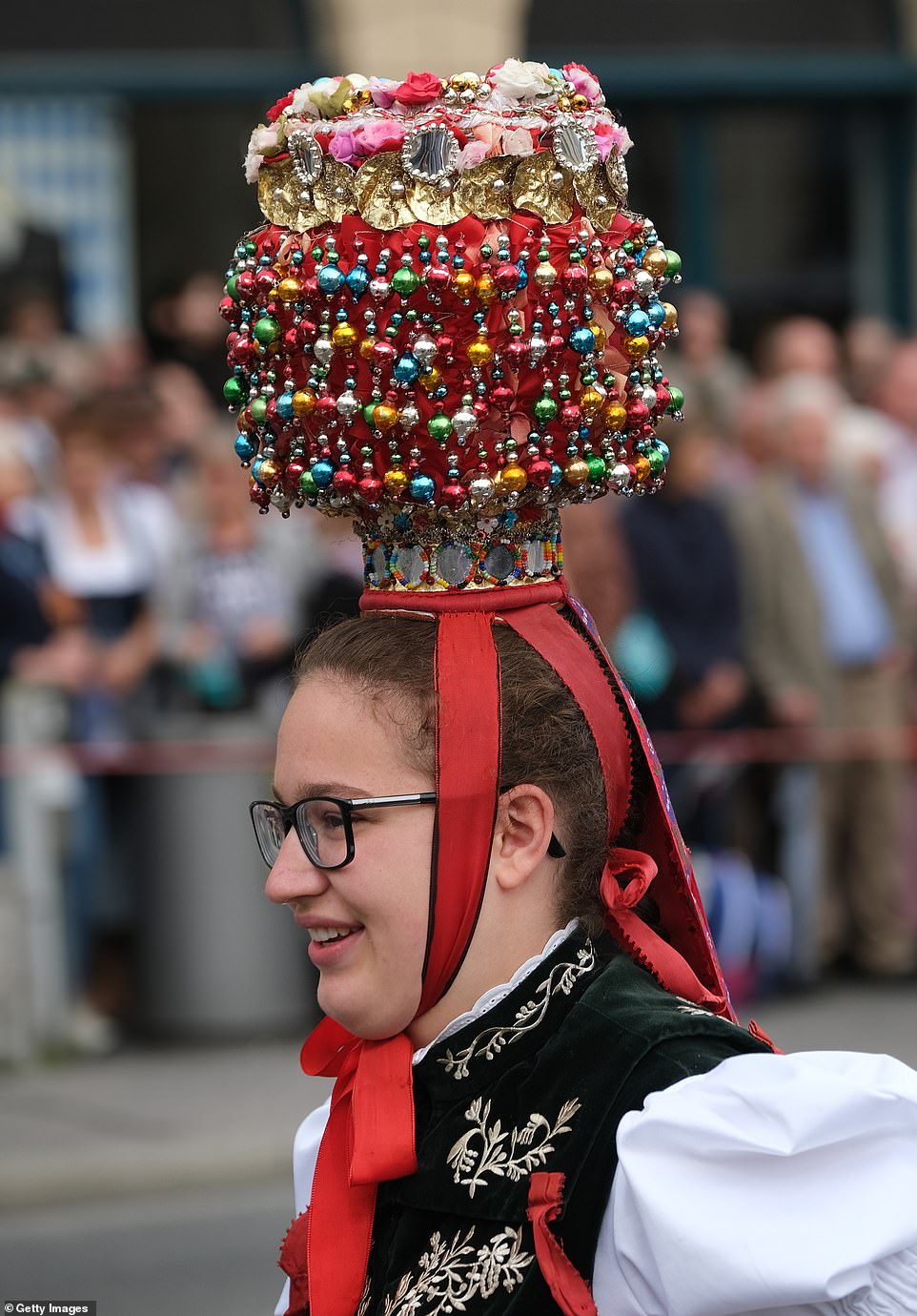