Angela Merkel’s government is set to agree new Covid laws designed to give Berlin the power to impose lockdown measures across the whole of Germany.

At the moment, the Chancellor has the power to activate a national ’emergency brake’ to curb Covid cases but all measures must be agreed with state leaders and it is left up to them how to implement them.

That has created a political tug-of-war between Merkel who has been pushing for tougher lockdown rules while regional governors try to reopen their economies.

The new rules would give Merkel the power to impose nationwide rules such as curfews and school closures in areas with high infection rates.

But the controversial laws are bitterly opposed by some states, and fraught with political difficulty for Merkel and her CDU party as the the far-right AfD courts voters opposed to lockdowns ahead of the September elections. 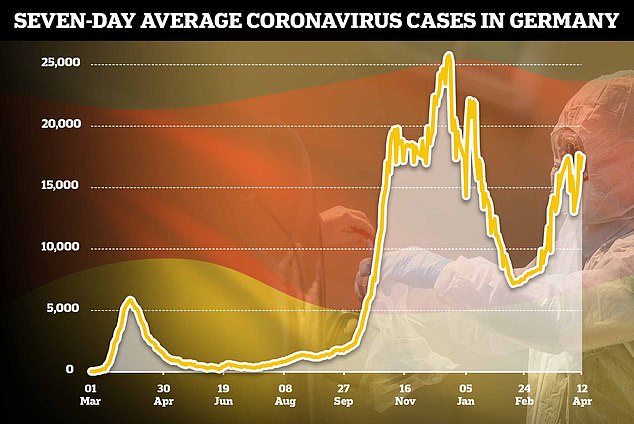 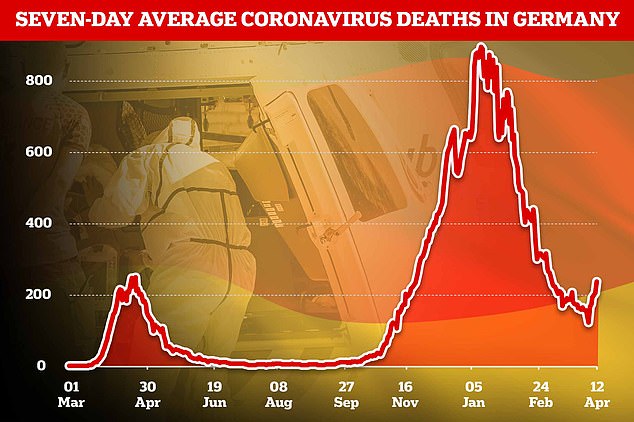 While deaths from the virus have not hit their second wave peak, they have begun rising again amid fears the situation could deteriorate further

Meeting in Dresden to agree a new party manifesto at the weekend, the AfD came out in favour of ending Covid measures and of withdrawing Germany from the EU.

Germany is currently battling a third wave of Covid infections that saw the number of patients in intensive care rise by 20 per cent last week – a trend that Health Minister Jens Spahn said is unsustainable and will see beds run out.

The far-right Alternative for Germany party is calling for an end to ‘lockdown madness’ and Germany’s exit from the EU as part of its new manifesto.

Meeting in Dresden at the weekend, the AfD backed a slogan of ‘Germany, but normal’ for the September ballot.

Policies it plans to adopt include rejecting masks in day-care centres and schools and ending ‘disproportionate’ lockdown measures.

AfD delegates also backed a call for Germany to leave the EU and set up a new European community of economies and interests.

Merkel attempted to impose a short but strict nationwide lockdown over Easter to curb cases but was forced into an humiliating climb-down over the unpopular decision.

‘The aim is to bring the country as quickly as possible to a situation with much lower infection rates at which we can responsibly ease restrictions with testing,’ he said.

Regular meetings between Berlin and the regions to set Germany’s coronavirus policies have been marked by bitter disputes and spotty compliance in recent weeks.

Most notably, some states have not followed through on an agreement to row back on the easing of measures in areas where the seven-day incidence rate exceeds 100 new infections per 100,000 people.

The adjusted law set to pass cabinet on Tuesday would give Berlin the power to enforce this ’emergency brake’.

In a draft seen by AFP over the weekend, measures included a night-time curfew between 9pm and 5am, the closing of non-essential shops and restricting private gatherings to five people from two households.

The draft would also see Berlin force schools – usually strictly within the remit of the federal states – to revert to virtual teaching in most cases.

Yet amid fierce criticism from some regional leaders, Seibert said Monday that discussions over details were still ongoing.

Lower Saxony’s interior minister Boris Pistorius told Die Welt newspaper on Monday that it was a ‘big mistake to take power from the regions in the middle of a crisis’. 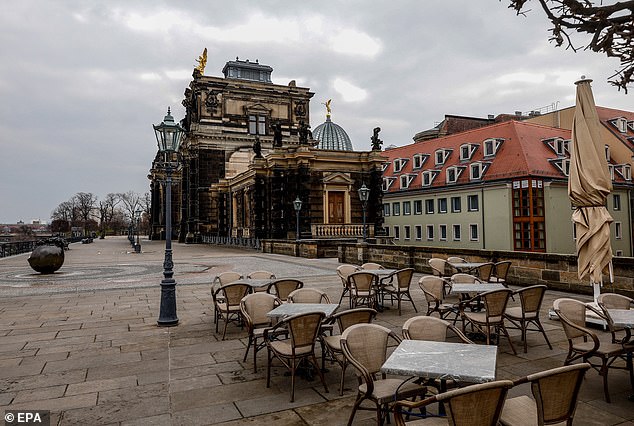 The streets of Dresden are empty amid a partial nationwide lockdown that Germany has been under since last year, which saw restaurants and leisure facilities shuttered 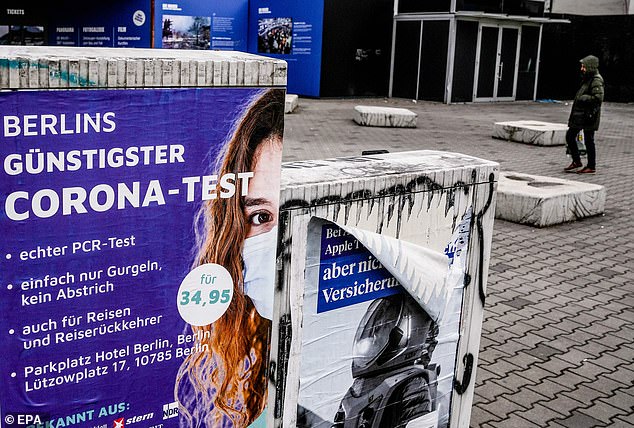 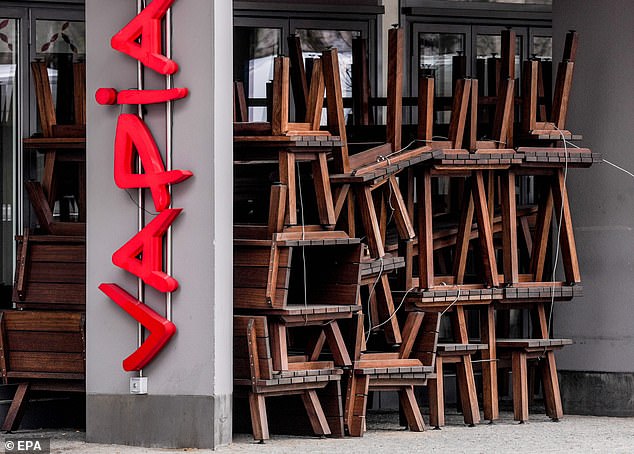 Empty outdoor tables and chairs stand outside of a restaurant in Berlin, Germany

The German Association of Towns and Municipalities also criticised the plans, telling the Rheinische Post that the proposed curfews were ‘constitutionally problematic’.

The changes would also still have to pass through parliament, where Merkel’s right-left coalition has a majority.

The law could also potentially be passed without approval from the upper house Bundesrat, where passage of the bill is less certain.

‘We don’t need to have everyone on board,’ Ralph Brinkhaus, parliamentary leader for Merkel’s conservatives, told public broadcaster ARD.

‘The numbers are too high at the moment. The pressure on our intensive care stations is growing and we have to say that this third wave is perhaps the hardest one to break,’ said Merkel.

Case numbers continue to rise despite cultural venues, restaurants and leisure facilities having been closed for months, with the total number of infections passing the three million mark on Monday.

‘If we don’t go into lockdown, a lot of people will lose their lives,’ said Lothar Wieler, head of the Robert Koch Institute infectious disease agency.