People in Germany, France and Sweden blame their own governments and the EU for their stuttering vaccine programmes while Britons are happy with the UK’s rapid progress, a new poll shows.

The survey by Kekst CNC found 77 per cent of Britons saying their country has handled the vaccine roll-out well – compared to 23 per cent in Germany, 19 per cent in Sweden and 18 per cent in France.

All three countries are languishing far behind the UK in the vaccine race after supply chaos across Europe was made worse by top EU figures including Emmanuel Macron raising unfounded doubts about the efficacy of the AstraZeneca jab.

According to the poll, only 17 per cent in Germany and 24 per cent in France say the EU has done a good job of trying to immunise its 447million population.

In Britain, 77 per cent of people praise their country’s efforts in the vaccine roll-out (in green), but the figures are much lower in Germany (23 per cent), Sweden (19 per cent) and France (18 per cent) which are all lagging far behind the UK 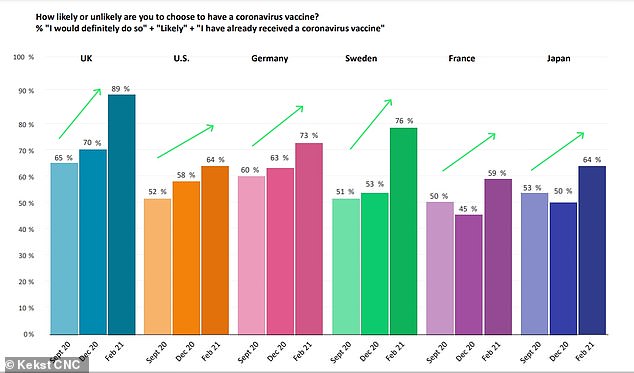 The poll also found Britons (far left) the most likely to take a vaccine, with 89 per cent saying they would take a jab or have already done so. The figure is only 59 per cent in France

The findings are unsurprising given the much faster pace of the roll-out in Britain, where more than 30 per cent of the entire population has had at least one dose.

The poll of 1,000 adults in each nation also found that Britons were the most likely to take the jab, with 89 per cent saying they would get one or had already done so.

That compared to 76 per cent in Sweden, 73 per cent in Germany and only 59 per cent in France where vaccine scepticism has long been a concern.

More than half of those surveyed in the three EU nations said vaccination progress was too slow in their country, a view shared by only 14 per cent of Britons.

The UK is moving at one of the fastest rates in the world after approving both the Pfizer and AstraZeneca vaccines before any other country.

By contrast, the EU did not get started at all until late December and did not approve the Oxford jab until the end of January after feuding with AstraZeneca over supplies.

Germany, France and Sweden were among the countries to limit the AstraZeneca jab to under-65s because of the small sample size in clinical trial data.

Macron poured fuel on the fire by claiming the vaccine was ‘quasi-ineffective’ in older people following sensational but widely-debunked claims about its efficacy. 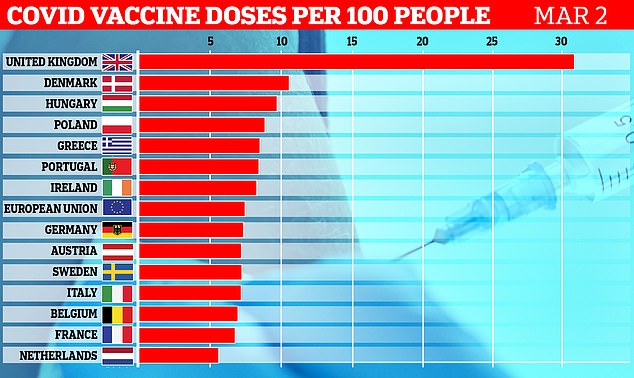 The UK is far outpacing Germany, France, Sweden and every other EU country in the vaccine race, allowing Boris Johnson to lay out plans to end lockdown entirely by midsummer

Real-world studies in England and Scotland have proved that the jab is effective, and some EU countries are now poised to U-turn by making it available to all ages.

In Germany – where Angela Merkel is under fire for letting Brussels take the lead in the vaccine drive – the poll found 51 per cent saying the EU had handled it badly.

Another 26 per cent said Brussels had done neither well or badly, leaving only 17 per cent willing to give the EU good marks for its work so far.

Asked about their own domestic efforts, 23 per cent of Germans said their country had done a good job with vaccines while 46 per cent said it had done badly.

Merkel has been left pleading with people to take the AstraZeneca jab with many Germans preferring the Pfizer/BioNTech product co-developed in Germany.

It comes with the chancellor also facing pressure to ease a months-long lockdown even as infection rates start to climb again after weeks of decline.

France’s vaccine efforts were praised by 18 per cent and criticised by 39 per cent, after scientists said the roll-out was too slow to prevent a third wave of severe cases.

The slow progress has left France teetering on the bring of a third national lockdown which Emmanuel Macron has tried to prevent with a nationwide 6pm curfew. 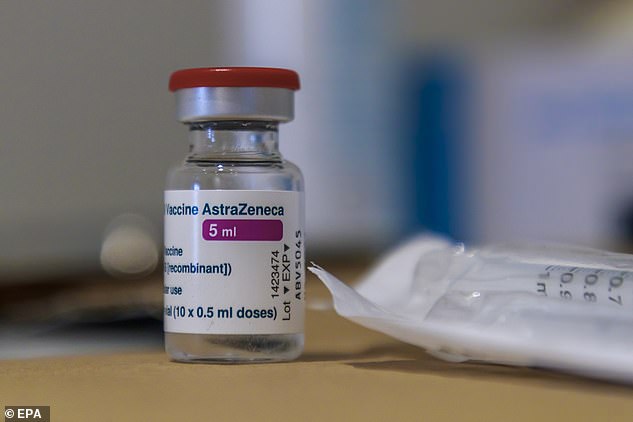 And in Sweden, 51 per cent said their country had handled the roll-out badly, compared to 19 per cent who said it had done well.

The findings are a blow to the Nordic country which has long cited the ‘high level of trust in government agencies’ as justification for its no-lockdown policies.

The survey shows a slump in approval ratings for Swedish PM Stefan Lofven, who is now 17 points underwater in the public’s assessment of his virus response.

Macron is at minus 15 per cent, while Merkel is still up by 23 per cent but her ratings have dropped significantly since Germany’s relative success in the first wave.

By contrast, Boris Johnson has enjoyed something of a revival after long being criticised for his handling of the crisis, although his rating is still minus 13 per cent.

The PM last week laid out detailed plans for lifting the lockdown which could see all limits on gatherings scrapped by June 21 in England.

All adults are expected to be given a first dose of the vaccine by July 31, while the EU has a more modest aim of vaccinating 70 per cent of adults by September.