The Germans, who knocked out Sweden in the quarters, relied on a scrappy defence and opportunistic offence to squeeze past a Canadian team who had looked on course for a third straight Olympic final appearance even without their NHL players.

The win set up a gold medal game against the mighty Russians, who beat Czech Republic 3-0 in Friday’s first semi-final. It also guarantees Germany an Olympic medal for the first time since the Innsbruck games in 1976, when they won bronze.

‘It’s unreal to get to play for gold,’ German defenceman Frank Hordler said.

‘It gives me goosebumps,’ said forward Patrick Hager, who scored what proved to be the winner and had an assist.

It was a day of sporting ignominy for hockey-mad Canada, winners of the last two Olympic gold medals in men’s ice hockey. 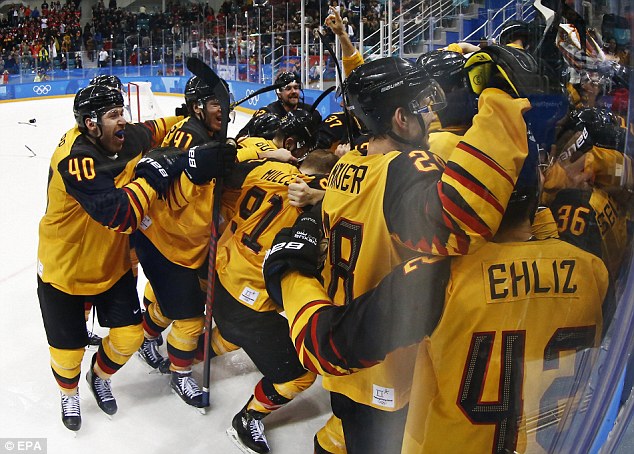 The Canadian men’s curling team were earlier shut out of the Olympic medals for the first time.

To add insult to injury, one of the Germany’s goalscorers, Brooks Macek, grew up in Winnipeg, Canada but now also holds German citizenship.

‘The guys here on Team Germany, they’re my brothers now,’ Macek said. ‘It’s like a family in there and it means a lot to be heading into the gold medal game with these guys.’

Making the most of several Canadian missteps and penalties, Germany built a 4-1 lead through the first two periods only to face a withering comeback in the third as Canada scored two goals in the first 10 minutes of the period. 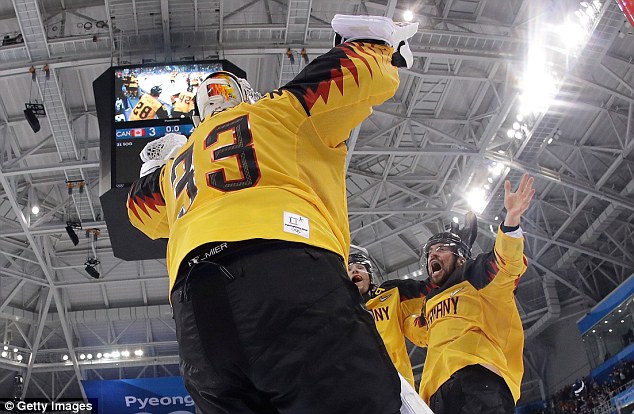 But the Canadians fell one goal short despite peppering German goaltender Danny Aus den Birken with a barrage of shots. They outshot the Germans 15-1 in the final frame.

Costly penalties were a factor in Canada’s defeat and Germany took advantage, scoring twice on the power play, including their first goal from Macek with a two-man advantage in the first period.

In the second period, the Canadians’ first goalscorer, Gilbert Brule, was ejected for a hit to the head on Germany’s David Wolf.

‘We took penalties in the second, we just took ourselves out in the second,’ Team Canada coach Willie Desjardins said. ‘It was tough. They scored their chances. They didn’t have a lot of chances, but when they had they scored. 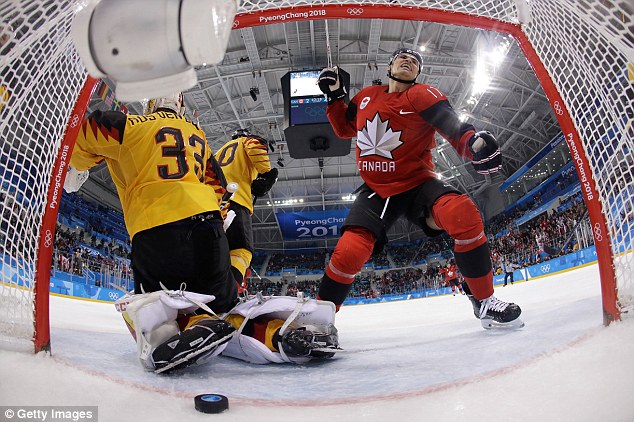 ‘They scored four goals maybe with nine shots, and it wasn’t that we were giving up a lot, they were just going in. There’s nights that happens.’

In all, the Germans were outshot 31-15, but four different players managed to connect on their limited chances – Macek, Matthias Plachta, Frank Mauer and Hager.

Emblematic of the puck bouncing their way all night, Hager was credited with the game-winning goal on the powerplay off a shot from Plachta that struck his knee and was redirected past Canadian goaltender Kevin Poulin.

Now with the gold medal on the line Germany face a date with the Olympic Athletes from Russia, who have emerged as the clear favourites in an Olympic tournament being played without NHL players for the first time since 1994. 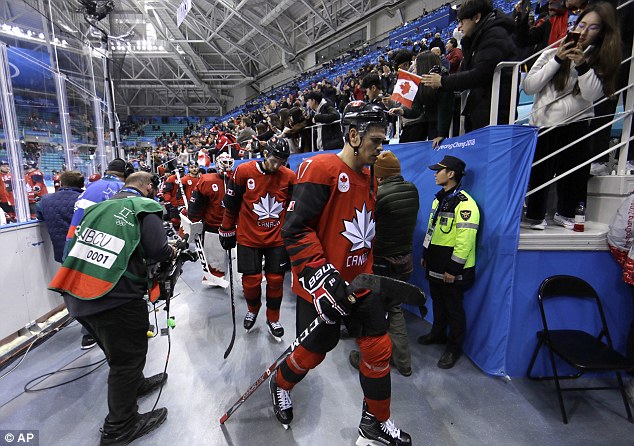 The two countries have faced each other only once before in Olympic play since the fall of the Iron Curtain and the reunification of Germany, and the Germans won that game 4-2 in 1994 at Lillehammer, Norway. Before that, the Soviet Union team had been 4-0 against West Germany on Olympic ice.

The Russians will be all the more favoured now that Sweden and Canada, the teams coming into the tournament seen as holding the best hope of beating them, have been eliminated.

‘We have nothing to lose,’ Germany captain Marcel Goc said. ‘It’s Russia. We play against the top guys from the KHL (Kontinental Hockey League) and they have lots of NHL experience too.’

‘We’ve got to change I think nothing and rest up tomorrow for Sunday.’ (Additional reporting by Simon Jennings and Liana Baker, Editing by Ed Osmond and Ken Ferris)