Germany has suffered its largest daily spike in coronavirus deaths as 254 people were added to the death toll today.

The scores of new deaths bring the tally from 1,607 to 1,861, dampening hopes that the crisis is under control.

The infection rate has shown signs of flattening, but experts warn there is a time lag before any slowdown will be reflected in the death toll.

This graph shows the daily number of coronavirus deaths in Germany, which reached a peak of 254 today to bring the total to 1,861 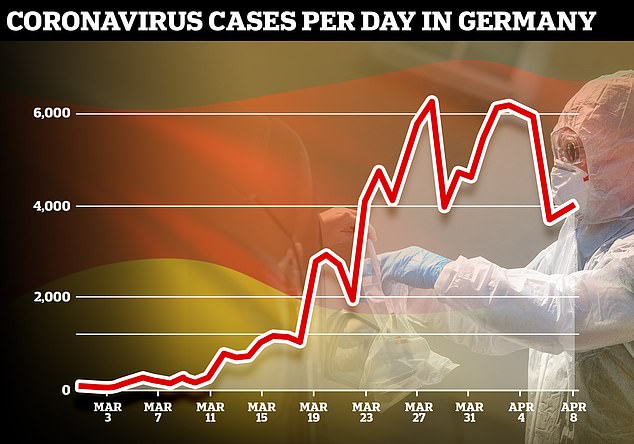 This chart shows the daily number of new cases in Germany. Today’s figure of 4,003 is higher than yesterday’s 3,834, but the jump of 4.0 per cent has hardly changed for three days

Of the 254 new deaths, 114 were in either Bavaria or Baden-Wuerttemberg – the two southern states closest to Italy which have been hardest hit by the crisis.

There were also 66 new deaths in North Rhine-Westphalia, the industrial heartland in the west where Germany saw its first major outbreak.

Berlin has confirmed more than 4,000 cases, although only 32 deaths of which four were added in the latest figures.

The national total of 254 deaths surpasses the previous high, which was the 184 deaths added to the tally on Sunday.

The 4,003 new cases are a higher jump than yesterday’s 3,834, but in percentage terms the increase has remained almost identical for three days at 4.0 per cent.

After regularly leaping by 15.0 per cent or more in late March, new infections have not increased by more than 9.1 per cent in a day since the start of April.

Germany’s mortality rate is 1.8 per cent, meaning approximately one death for every 56 confirmed cases. 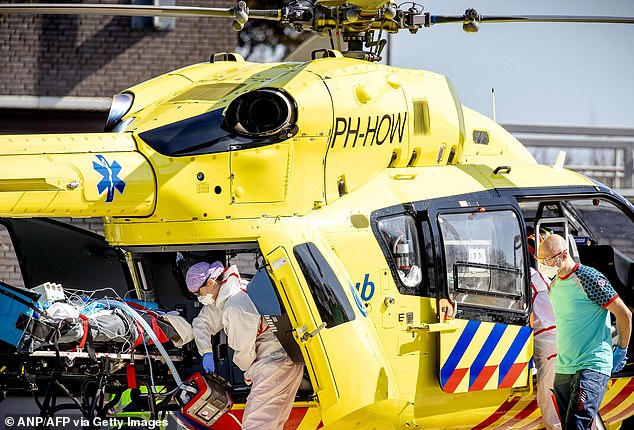 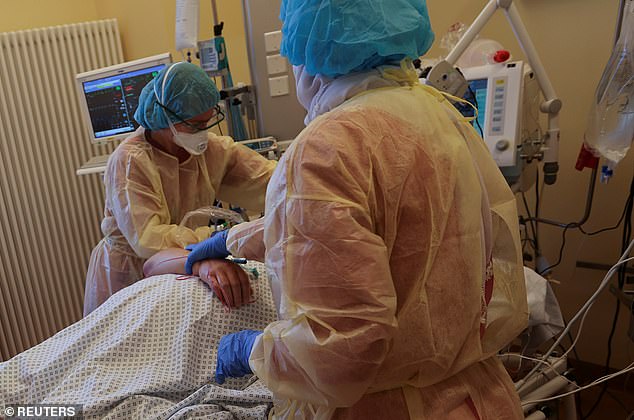 The low rate is thought to be linked to Germany’s regime of mass testing, with 500,000 people being screened for the virus every week.

Vets at a Berlin university have even begun rolling out tests for cats and dogs after virologists found that pets could be infected, although there is no evidence they can pass the disease to humans.

An interior ministry document has drawn up plans for a partial lifting of the lockdown if the infection rate remains low enough.

Under those plans, life could begin to return to normal if the contagion rate is below 1.0, meaning that each patient is infecting less than one other person on average.

But the head of the Robert Koch Institute, which collects the official figures, warned yesterday that it was too early to say whether the epidemic was definitely slowing.

Germany is assembling a €1.1trillion spending package to ease the impact of the economic standstill, including guaranteed loans to businesses.

Ministers are also planning a new law to restrict foreign takeovers of German companies, aiming to keep critical production within its borders.

Angela Merkel said on Monday that Europe needed to develop ‘self-sufficiency’ in manufacturing of medical gear such as masks.

‘Regardless of the fact that this market is presently installed in Asia… we need a certain self-sufficiency, or at least a pillar of our own manufacturing’ in Germany or elsewhere in the European Union, she said. 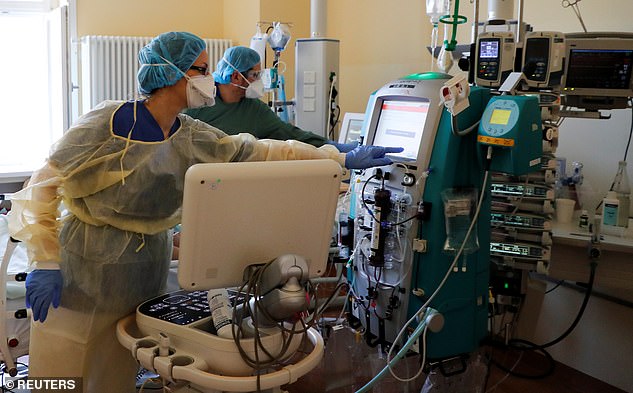 At a cabinet meeting today, ministers will discuss a new law to make it easier for Berlin to block foreign takeovers.

Instead of demonstrating that the acquisition presents a real danger to German security, officials would only have to prove a ‘likely impact’.

Takeovers will be placed on ice while the government makes such assessments, preventing the new owners laying hands on any of the firm’s intellectual property.

‘Recent weeks have shown that supplying the German people with items vital for life, like vaccines, can depend on a single company,’ a government source told German media.

‘Information or technology seeping out during an ongoing investment check can have serious consequences.’

Elsewhere, Germany is planning to accept 50 young people from Greek migrant camps where conditions have worsened because of coronavirus.

Germany has also accepted hospital patients from neighbouring countries including Italy and France in a show of European solidarity during the crisis.

But Berlin has maintained its opposition to joint European debt instruments, despite pleas from Italy.