Germany vulnerable to second wave of Covid-19 as antibody study reveals only 1.3% has immunity

Germany is vulnerable to a second Covid-19 wave because only 1.3 per cent of the country has developed antibodies, experts fear.

The Robert Koch Institute, the nation’s infectious diseases agency, warned almost everyone in the country may still be at risk of getting infected.

Even the minority with antibodies — thought to be around 1million people — are not necessarily protected because immunity may wane over time.

It comes as a huge blow to the nation because it means it is nowhere near the level for ‘herd immunity’, when so many people have had been exposed that any outbreak naturally fizzles out.

Scientists are currently baffled by the gender gap, and believe the difference could be down to how the immune systems differ between sexes.

Germany is still vulnerable to second wave of Covid-19 as antibody study has revealed only 1.3 per cent of the country has antibodies. Pictured, Berlin, July 6

Germany has recorded 200,436 confirmed coronavirus cases so far and the crisis there is continuing to fizzle out.

The RKI has been analysing blood samples from 13 blood banks over the past three months, The Times reports.

Covid-19 survivors do not develop strong immunity against the coronavirus, a study has claimed.

Researchers looking at how the immune system reacts in people who have had the disease once already found it did not offer as much protection as expected.

With some illnesses such as chickenpox, the body can remember exactly how to destroy it and becomes able to fend it off before symptoms start if it gets back into the body.

But the coronavirus — called SARS-CoV-2 — did not seem to trigger this response in everyone who caught it, according to the research that deals a blow to hopes for widespread immunity without a vaccine.

A study of 41 people in Australia found that only three of them developed a strong enough antibody immune response that they could block half of the viruses if they got into the body again.

On average, the immune system’s antibodies were only able to block 14.1 per cent of the coronaviruses if someone was exposed to the illness a second time, making it likely that someone could get ill again.

Dr Adam Wheatley and his colleagues looked specifically at antibodies that worked by blocking the connection between the ‘spike’ on the outside of the coronavirus and the receptor inside the body that it attaches to, known as an ACE-2 receptor.

They looked for antibodies specific for Covid-19, which signal a person has already had the infection in the past.

Generally speaking, antibodies produce immunity to a virus because they are redeployed if it enters the body for a second time.

But researchers still do not know for sure whether people can catch Covid-19 more than once or if they become immune after their first infection because the virus has only been known to science since December.

Antibody studies, also known as seroprevalence research, are considered critical to understanding how an outbreak has spread and can help guide decisions.

People in their 40s were the least likely to have antibodies, while the highest rates were in the over-50s and those aged between 20 and 40.

Experts said it was important to bare in mind the results may be skewed by the fact blood donors tend to be young and healthy, so do not truly represent the population.

According to The Times, The RKI said: ‘Due to the low prevalence of antibodies against Sars-CoV-2 in the sample we investigated, we suspect that a large part of the population remains susceptible to infection.

‘This means that if the transmission rate increases another wave of infections could arise.’

The research dashes hopes that German people are protected if the virus resurges in the autumn or winter — which some scientists believe will be the case, as with the flu and common cold.

The findings also clash with one early study that suggested up to 15 per cent of the population had been infected.

Research showed around one in six of the population of Gangelt, in Heinsberg district, had been infected, and that a fifth of infected people had not shown any symptoms.

But several experts criticised that the study had been made public before publication and expressed doubts about the method of statistical sampling used in the study.

Across Europe — once the heart of the pandemic — antibody surveillance studies have produced varying results.

Only one per cent of Danes have had the coronavirus, according to blood samples analysed by the nation’s health agency.

While researchers in Spain found only five per cent of the population have previously been infected with SARS-CoV-2 and have built up antibodies.

To gain ‘herd immunity’, experts say around 60 per cent of people need to have the virus, and most nations are far from achieving that figure.

Other scientists claim herd immunity against Covid-19 could develop if just 10 per cent of the population catches the disease, if the people who first get infected are socially active.

Herd immunity was the original strategy of the UK, rather than a strict lockdown, in order to remove the virus from the community.

But the government denied it was ever their plan back in March. It is controversial because it means thousands of people die as a result. 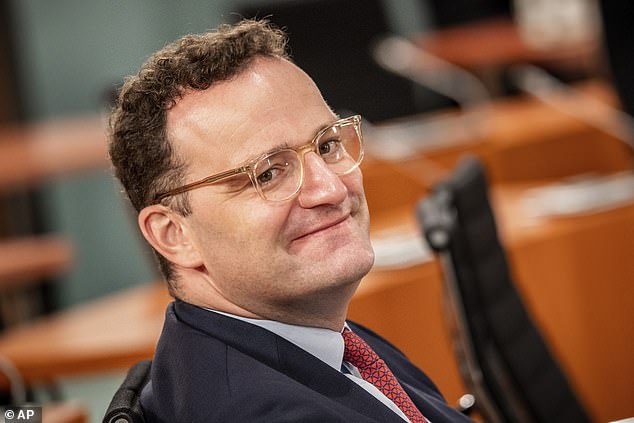 Germany’s Health Minister, Jens Spahn, believes a second wave in the country can be prevented if people stay vigilant

Although the level of antibodies discovered by the RKI and various other European health agencies are very low, there are other types of immunity likely to be within the population that have not been accounted for.

Other types of immunity — such as that produced by white blood cells called T cells — are the first line of defence when the infection takes hold.

The Karolinska Institutet and Karolinska University Hospital, in Sweden, showed that many people with mild or asymptomatic Covid-19 demonstrate so-called T-cell immunity to the disease.

This is even if they have not tested positive for antibodies to the virus.

The research would suggest that immunity among the population in the event of a second wave is higher than antibody testing suggests, Philip Thomas a professor of risk management at University of Bristol told MailOnline.

‘The point about the Karolinska T-cell results is that the second wave could be a lot less severe, perhaps only as big as the first peak, perhaps twice as big, but ultimately manageable,’ he said.

Jens Spahn told a news conference on Monday: ‘We have to try to prevent infections, particularly now during the holiday season.

‘We don’t automatically have to expect a second wave in the autumn and winter. We can prevent that together as a society as we did before — breaking the wave and keeping the pandemic in check.’

He said it is important for Germans to remain alert when traveling abroad.

‘I understand the impatience, but where there are parties, the infection risk is particularly high,’ Mr Spahn said.

The health minister also added that 15.5million people have installed Germany’s CoronaWarn app and that 500,000 people were tested for the disease last week, the highest figure since the pandemic began.