New coronavirus figures in Germany showed further positive signs that the country is over the worst of the crisis, as both the number of new confirmed cases and deaths were less than yesterday’s.

Saturday saw the country confirm 2,055 new coronavirus cases, bringing to total figure to 152,438, and 179 new deaths, bringing the total fatalities in the country to 5,500.

While Germany’s total number of cases means the country has the fifth highest number of infections globally, it has seen far fewer deaths than the likes of the U.S, Italy, Spain, France and the UK, all of which have seen at least 19,000.

The country has begun to open up shops and allow people on public transport, with some restrictions in place, such as the wearing of face masks in certain states and observing social distancing measures, but there are fears of a second wave of infections.

On Thursday, Chancellor Angela Merkel warned Germany ‘we can’t return to life like it was before coronavirus’ and said some states had already gone too far in relaxing measures.

Meanwhile, Berlin has seen some anti-lockdown protesters taking to the streets to rally against the measures that remain in place in the country. 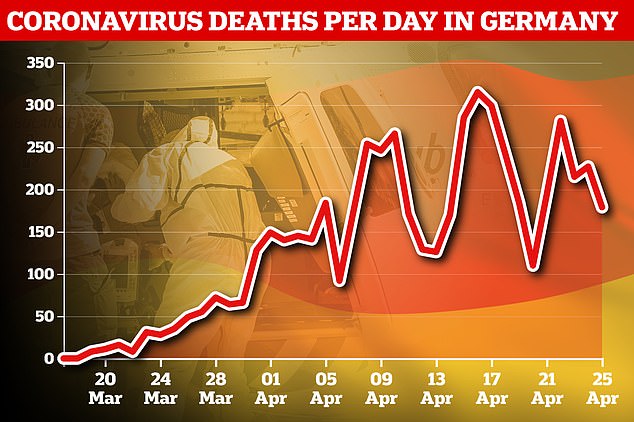 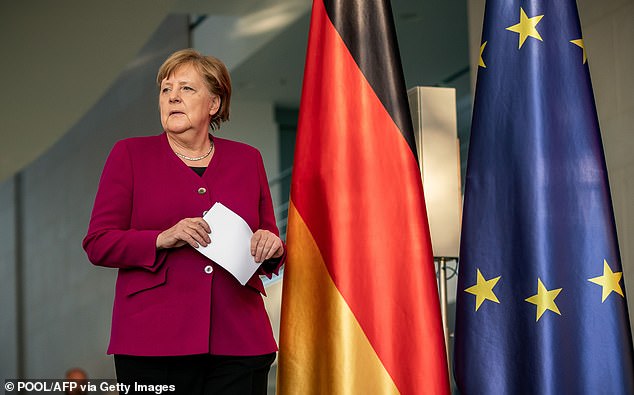 From July 1, Germany will take up its position as president of the European Union for six months, and has said that it will focus its time in the position on the fight against the coronavirus, its social and economic impact, as well as environmental issues.

‘It will be clearly dominated by the issue of combating the pandemic and its consequences,’ Merkel said of the presidency in her weekly video podcast, adding that as long as there was no vaccine, the virus would dominate life in Europe.

Merkel said Germany would promote the idea of an efficient European health care system for all member states, as well as a financial transaction tax, minimum tax rates and a joint carbon emissions trading system for ships and planes.

The German cabinet will hold a special session on Wednesday to discuss the agenda for the German presidency of the EU, along with Jeppe Tranholm-Mikkelsen, the secretary-general of the European Council. 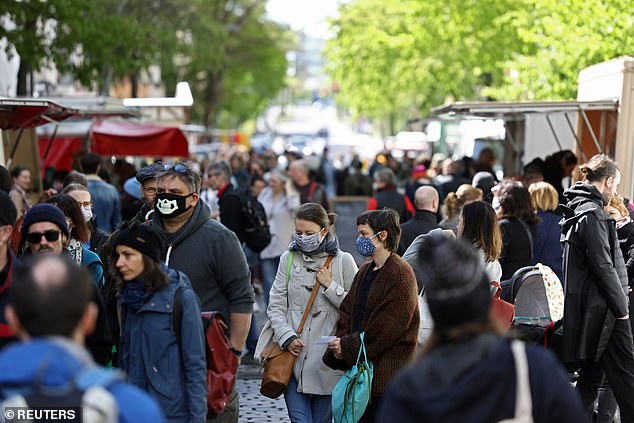 Shoppers are beginning to open again, as people in many states are required to wear face masks. Shoppers can be seen in this picture of April 25 in Berlin’s Boxhagener Platz 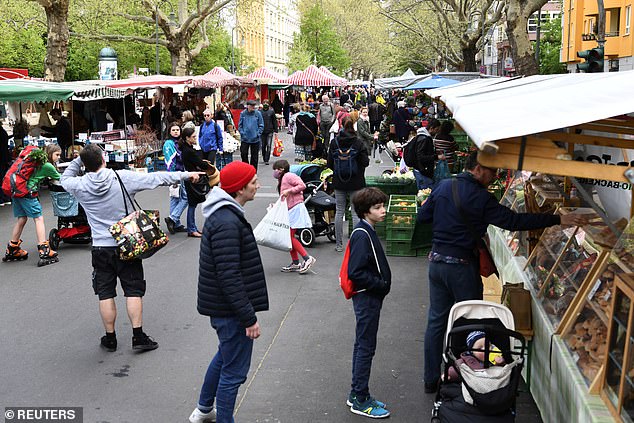 The country is cautiously beginning to reopen the economy, but is making preparations for a second wave of the coronavirus by increasing its intensive care capacity and supply of ventilators.

Soldiers are converting a Berlin exhibition centre into a hospital while a fifth of intensive care beds will be kept in reserve even as the epidemic loses pace.

The government also plans to roll out a contact tracing app in the coming weeks to jump on new outbreaks once the lockdown is eased.

Some shops have already re-opened but Angela Merkel has repeatedly warned that Germany must not become complacent, saying the country is still ‘on thin ice’. 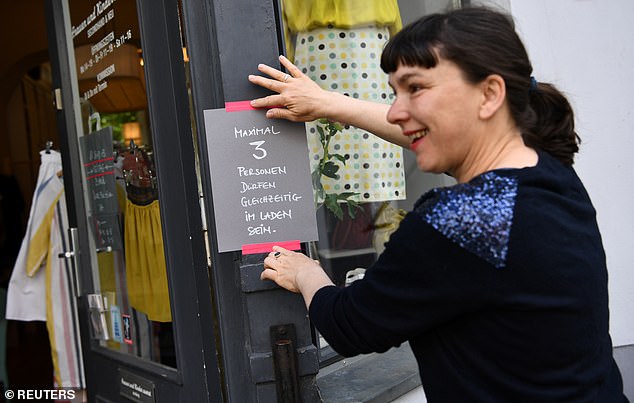 Pictured: A woman puts up a sign outside of her shop in Berlin, Germany, saying that a maximum of 3 people will be allowed in at one time to encourage social distancing

Virologist Christian Drosten of Berlin’s Charite hospital has warned that the virus could return with a ‘totally different force’ in the form of a second wave.

‘The virus will continue to spread in the course of the next weeks and months,’ Drosten told public broadcaster NDR.

A second wave would be dangerous because it could pop up ‘everywhere at the same time,’ Drosten said.

‘We may be in the process of completely squandering our head start,’ he said, warning against complacency. 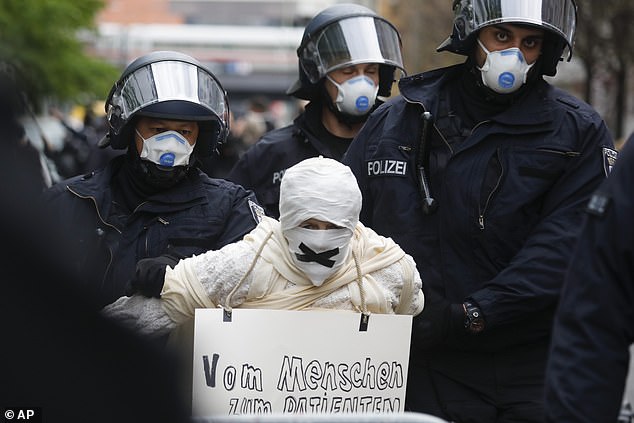 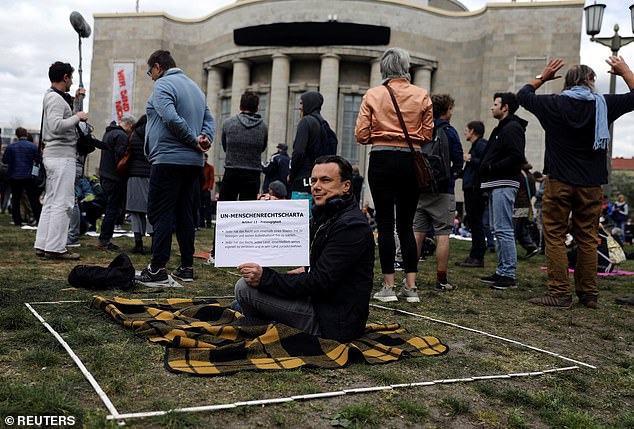 Despite the relaxation of restrictions throughout the country, and warnings from officials to not go too far, Berlin today saw anti-lockdown protesters taking to the streets to rally against the measures that remain in place in the country.

Images of the rally showed protesters gathering holding signs at key locations throughout the city, including Berlin’s Rosa-Luxemburg-Platz.

The protests show that despite the fact that Germany is considered to have managed the coronavirus in the country better than a number of others, tensions are still rising as measures remain in place.

At a similar protest earlier in the week, The Guardian reported that among the crowd were anti-vaxxers, well-known conspiracy theorists, and rightwing extremists. Some have reportedly accused the government of using the coronavirus as an excuse to install a dictatorship. 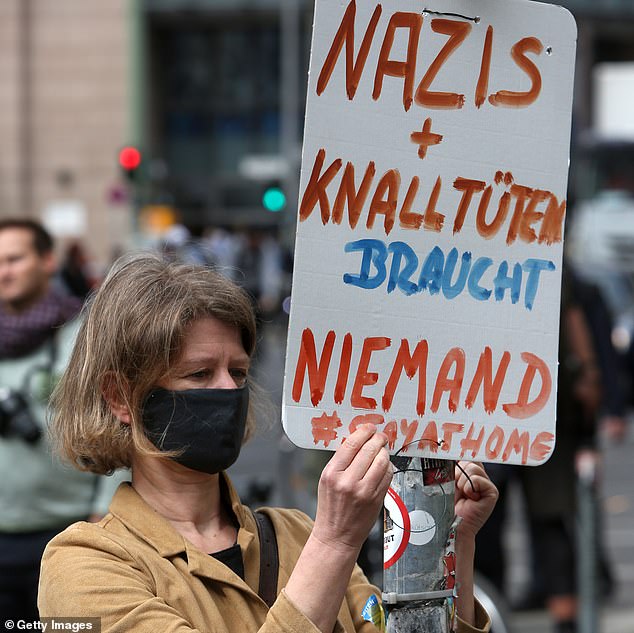 A counter-protester places a sign on a street lamp calling the right-wing demonstrators Nazis, and saying no one needs them

The Bundesliga, Germany’s top-flight football league and its equivalent of the English Premier League, has proposed May 9 as a date that the league could return, and politicians have given their cautious approval.

It is set to be the first major European league to resume amid the coronavirus pandemic after the 36 clubs in the top two divisions decided on a May 9 restart.

Matches will take place behind closed doors with a maximum of 322 people allowed in and around stadiums for top-flight Bundesliga matches and 270 for second-tier games. 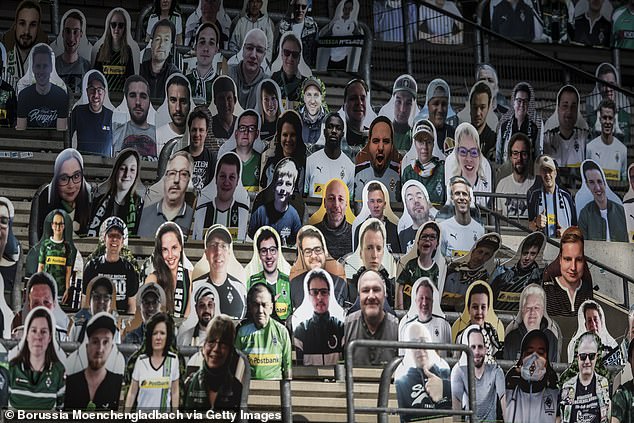 However, as the league proudly presented plans this week to resume playing under strict coronavirus regulations, Germany’s football fans made their feelings clear about the prospect of a return. And they are furious.

‘Professional football has been sick enough for a long time, and it should stay in quarantine,’ read the scathing statement released by ultras across the country last week.

Far from getting excited about the return of their beloved Bundesliga, German fans have fought it tooth and nail from the beginning, suspicious that this all just an exercise in making money, at the expense of public health and common sense.

Measures to limit the risk of the coronavirus spreading at football matches in the country could include putting cardboard cut-outs of fans in stadiums, to create the impression of a full stadium when their team play.

Other clubs are mulling an app on which supporters could click buttons labelled ‘cheer’ or ‘sing’ as they watch the game on TV, with the noise then broadcast through the stadium tannoy. 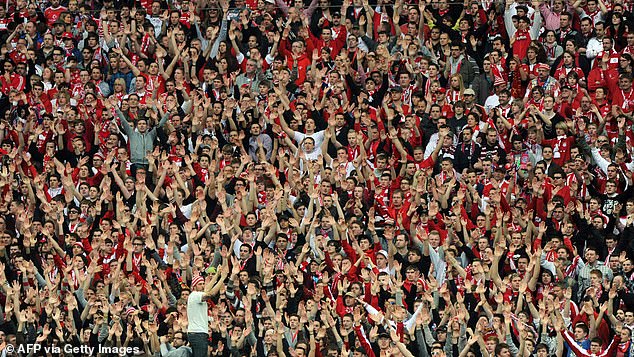 What it should look like: The Bundelisa is known for its passionate fans and huge crowds, which would not be able to gather under coronavirus social distancing measures