Germany’s economy is set for its worst year since WWII

The German economy is on course to shrink by 6.6 per cent this year after demand for exports collapsed amid the coronavirus pandemic, researchers have warned.

Europe’s largest economy shrank by 1.9 per cent in the first three months of this year and will contract by a further 12.2 per cent in the next quarter, the respected IFO Institute reported Tuesday.

The decline would be the largest the Germany economy has suffered since 1949 and would not be reversed until the end of 2021 at the earliest, researchers said.

The German economy is expected to shrink by 6.6 per cent this year after a collapse in demand for exports, researchers have warned (pictured, a worker at the VW factory in Wolfsburg) 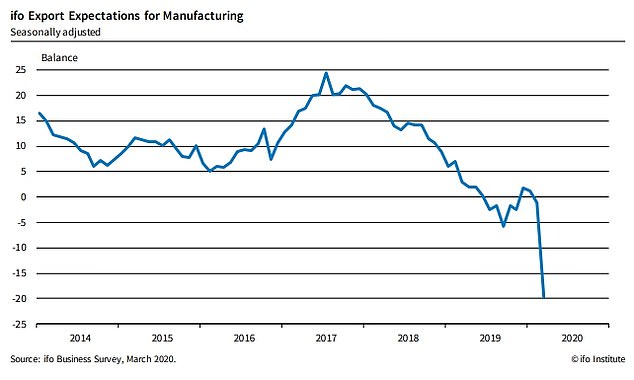 A graph based on a survey of 2,300 German businesses and their export orders for the next three months. The point score on the left-hand side represents the difference between businesses which said their exports were increasing and those who said it is declining

It comes after IFO reported a collapse in demand for German exports, on which the country’s economy heavily relies.

The dire economic news comes as Germany attempts to feel its way out of lockdown after the number of new coronavirus cases and deaths declined significantly from the peak of infection around a month ago.

The Robert Koch Institute reported 1,114 new cases of the virus Tuesday – up slightly from Monday’s figure but still well below the peak of 6,294 on March 28. 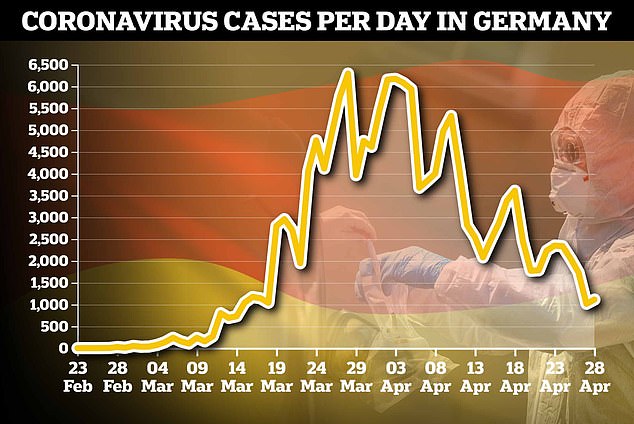 Germany reported 1,114 new cases of coronavirus on Tuesday – a slight increase on the previous daily total but far below the peak of infection 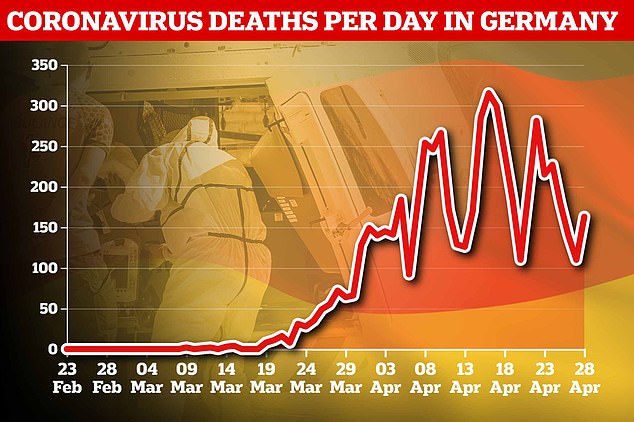 Germany also reported another 163 deaths from the virus, an increase on the previous daily figure of 110 but also far below its peak 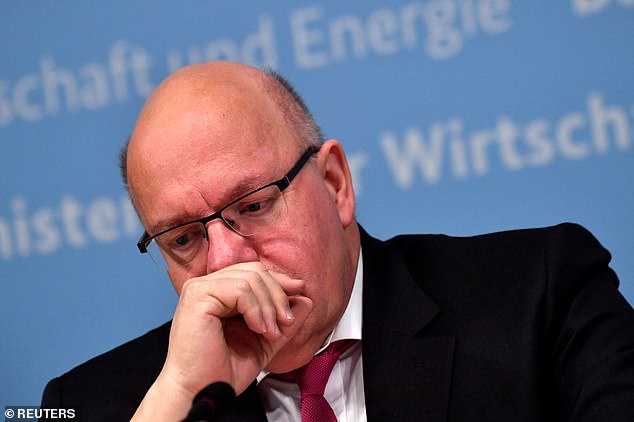 German Economy Minister Peter Altmaier has warned the country’s gastronomy sector may need a bailout, on top of a £650billion stimulus package for the rest of the economy

Another 163 deaths from the disease were also logged Tuesday, also a slight increase from the 110 reported Monday but well below the peak of 315 on April 16.

The country has confirmed 156,337 cases of the virus since the start of its outbreak while a total of 5,913 people have died.

Declining figures have prompted German states to begin reopening non-essential businesses, though Chancellor Angela Merkel has warned the lockdown will return if cases begin spreading out of control once more.

Meanwhile warning signs around the zoo urged guests to ‘take care of each other’ and observe social distancing while visiting.

Germany zoos have been particularly badly affected after the usually-busy spring period was wiped out by coronavirus lockdown measures.

The head of Neumünster Zoo even warned that she may have to start killing animals and feeding them to each-other to survive. 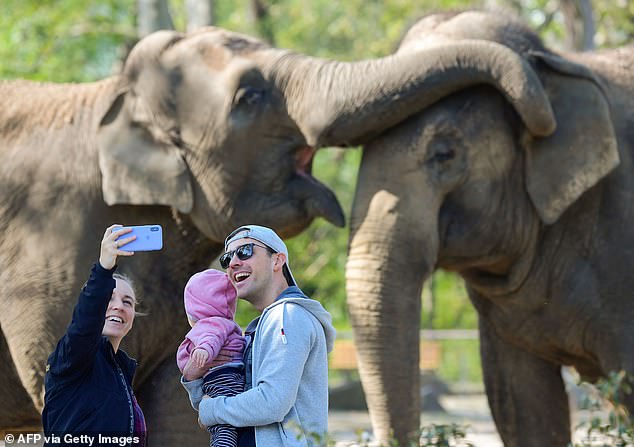 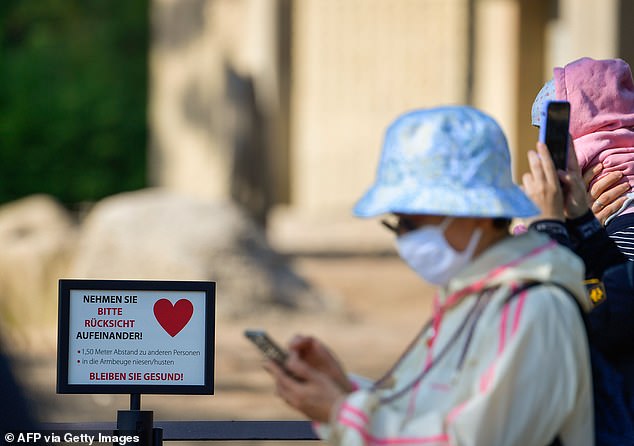 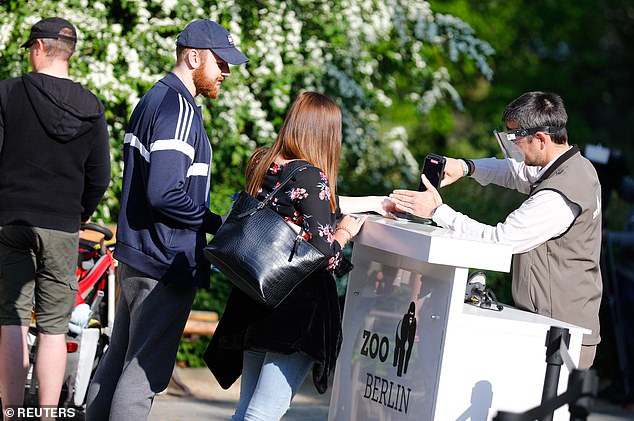 The government has already made loans and a short-time work scheme available to the sector and leaders of Chancellor Angela Merkel’s coalition have agreed to reduce sales tax on meals to 7 per cent for a year, said Altmaier.

‘As Economy Minister, I am saying if, contrary to expectations, it lasts a long time until a full opening is possible, we will have to reconsider aid, then we would need something like a rescue fund for gastronomy,’ he told ZDF television.

Germany has started to ease some restrictions, with some shops and factories now open, but most strict social distancing rules are still in place and Germans are required to wear protective face masks on public transport and in most shops.

The government has introduced a range of measures, including a 750 billion euro (£650billion) stimulus package, to help Europe’s biggest economy weather the predicted recession

Ministers are also thought to be in talks with national carrier Lufthansa about a rescue package that could cost £9billion.

Altmaier said he wanted restaurants and guest houses to open as soon as possible but that it must be safe and the priority was to ensure that the infection did not spread.

‘We need solutions for this and we are working on it,’ he said.

The jobless rate was up from 13.8 percent in the previous quarter, its lowest level since the third quarter of 2008 but still the highest rate in the eurozone after Greece.

Spain, one of the hardest-hit nations by the coronavirus pandemic, imposed a nationwide lockdown on March 14 which has largely paralysed its economy. 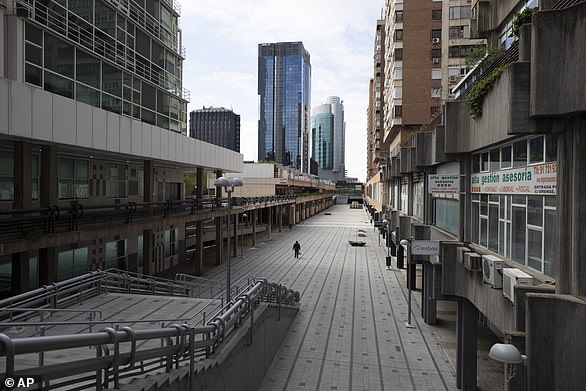 Many companies have faced difficulties to conduct business or have been forced to close temporarily, with hotels and the restaurant sector hit especially hard in the world’s second most visited country after France.

The number of jobless rose by 121,000 people to hit 3.31 million at the end of March, according to the statistics office.

But the figure may actually be higher since INE said many workers who lost their jobs were classified as “inactive” because the survey carried out to determine the jobless rate was disrupted by the lockdown.

The jobless figure also does not include the roughly 3.9 million workers who the government says have been temporarily laid off from their jobs.

Spain’s leftist government has simplified rules for temporary layoffs, under which companies facing financial difficulties can temporarily suspend a worker’s contract, while at the same time it had banned permanent dismissals during the pandemic to try to soften the blow to the economy from the COVID-19 outbreak. 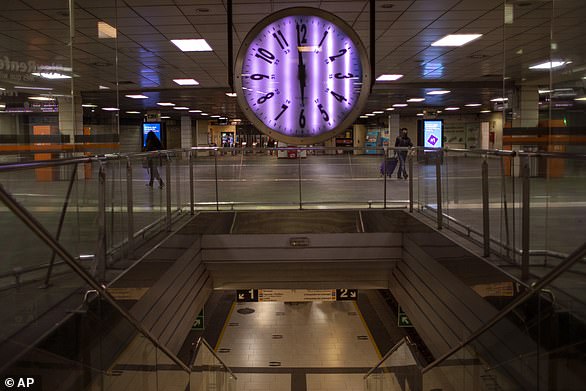 Spanish airline Iberia, fast-food retailer Burger King and automaker Seat are among the large companies that have temporarily laid off thousands of staff.

Tourism accounts for around 12 percent of Spain’s economic output and global travel has been hammered by the pandemic since governments imposed travel restrictions and airlines grounded scores of flights.

The International Monetary Fund predicts the country’s jobless rate will hit 20.8 percent this year while the Bank of Spain sees it rising to between 18.3 percent and 21.7 percent depending on how long lockdown lasts.

Parliament last week approved extending the lockdown until May 9 and Prime Minister Pedro Sanchez has said Spain could hopefully begin to ease its restrictions in the second half of May, but has warned that “de-escalation will be slow”.

Spain’s unemployment rate soared in 2008 after a decade-long property bubble burst, throwing millions of people out of work.

The rate has been steadily falling since hitting a peak of 27.2 in early 2013.