Billionaire Gerry Harvey is trying to evict a dying woman from a house she shared with her late de facto husband who was a friend of the entrepreneur for 50 years.

Peggy Luker lived rent-free on a property at Kurrajong, 75km north west of Sydney, for eight years with her long-time partner Garry Dent until he died aged 80 in 2017.

Mr Dent had worked as a contractor for Mr Harvey for 15 years before his death and the Harvey Norman co-founder, now worth an estimated $2.8billion, delivered a eulogy at his funeral.

Ms Luker claims she believed until Mr Dent’s death the house they shared belonged to her partner but that shortly after the funeral Mr Harvey told her to ‘move out and get the pension’.

She is fighting an eviction notice issued on Mr Harvey’s behalf by suing G Harvey Nominees, the trust listed as owning the property, in the New South Wales Supreme Court.

Billionaire Gerry Harvey is trying to evict a dying woman from a house she shared with her late de facto husband who was a friend of the entrepreneur for 50 years. Mr Harvey, the co-founder of Harvey Norman, is pictured with wife Katie Page 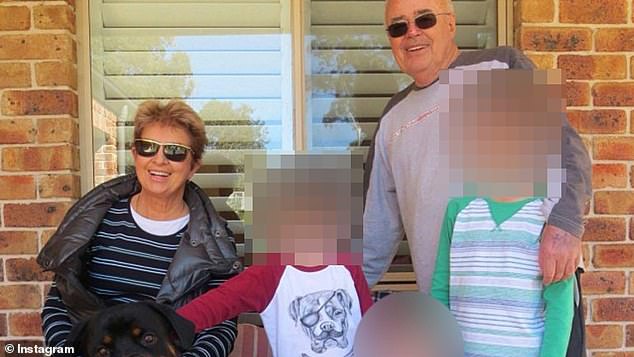 Peggy Luker lived rent-free on a property at Kurrajong, 75km north west of Sydney, for eight years with her long-time partner Garry Dent until he died aged 80 in 2017. Ms Luker and Mr Dent are pictured

She is terrified of being turfed out of the house and fears she will end up living on the street.

Mr Harvey, while sympathetic to Ms Luker’s circumstances, says in an affidavit he never gave the house to Mr Dent and he now wishes to sell the property.

Ms Luker states she learnt the property was still in the name of the trustee only after Mr Dent’s death – the same time Mr Harvey says he learnt Ms Luker believed it was hers.

After years of dispute Mr Harvey visited the property in June last year in an attempt to convince Ms Luker to move out, The Age newspaper reported.

According to Mr Harvey’s affidavit he told Ms Luker: ‘Maybe you can get into a housing commission or something. Surely you have a Plan B?’

Ms Luker had a failed kidney transplant seven years ago and developed skin cancer from medication she took to stop the organ’s rejection.

Doctors have told the 67-year-old there was no more they could do to prevent the cancer spreading to other parts of her body. 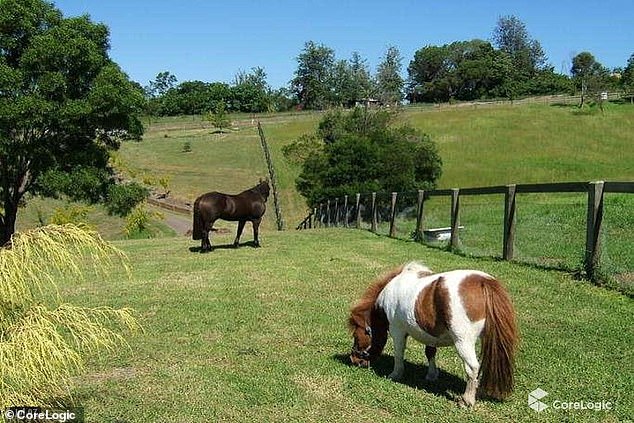 Ms Luker is suing Mr Harvey in the NSW Supreme Court after he attempted to evict her from this property at 467 Greggs Road, Kurrajong, where she has lived for more than ten years

Ms Luker states in an affidavit sworn on her behalf that Mr Dent was a property developer who had been a friend of Mr Harvey for about 50 years years.

‘The deceased worked for the Harvey Norman group of companies and in the general interests of Gerry’s various corporations until he was 80 years old when he died unexpectedly,’ the document says.

Ms Luker and Mr Dent – who had three children from a previous marriage – had lived together for 23 years and to her knowledge he had died without a will.

According to her affidavit, Mr Dent had solved a problem for Mr Harvey in 2001 when poor car park access to a Harvey Norman store at Penrith was causing the business to lose money.

Mr Harvey had then asked Mr Dent to help him subdivide 40 hectares of land he had bought with his first wife in 1972 and now wanted to sell as 15 individual lots.

The land at Kurrajong had a 28 hectare sanctuary in the middle which was fenced off to protect wildlife and featured nature walks and a bicycle track. 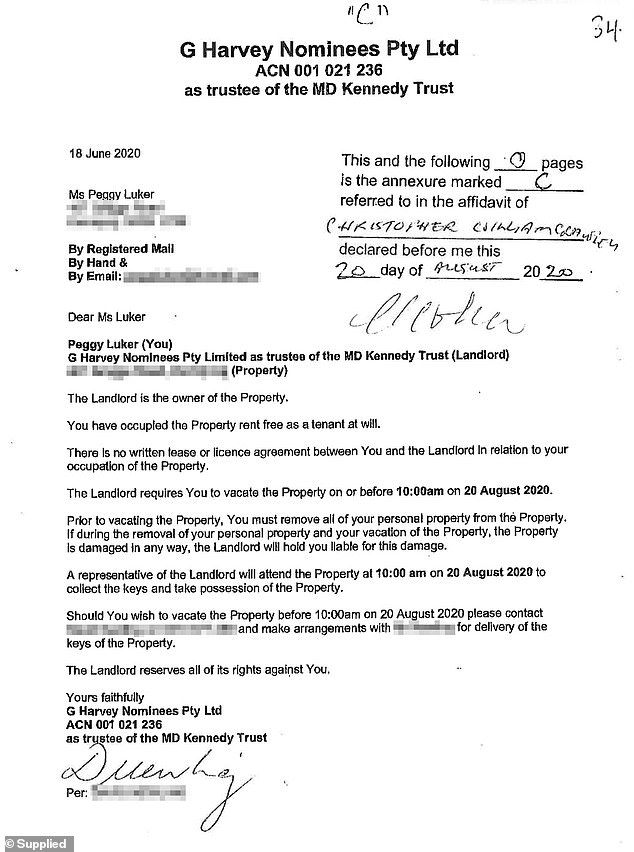 An agent acting of behalf of Gerry Harvey sent Ms Luker this eviction notice in June last year. ‘There is no written lease or licence agreement between You and the Landlord in relation to your occupation of the Property’

According to Ms Luker’s affidavit Mr Dent advised Mr Harvey he could attract buyers by building a luxury home on one of the larger vacant blocks.

The old friends allegedly agreed Mr Harvey would spend $800,000 on that house, which Mr Dent and Ms Luker would then live in and maintain until all the lots were sold.

When that first house on Patterson Lane was sold the couple would keep whatever difference there was between $1,300,000 and the sale price, according to Ms Luker.

Mr Harvey states in his affidavit there was no legal agreement to share profits from the sale and Mr Dent never complained about the situation. 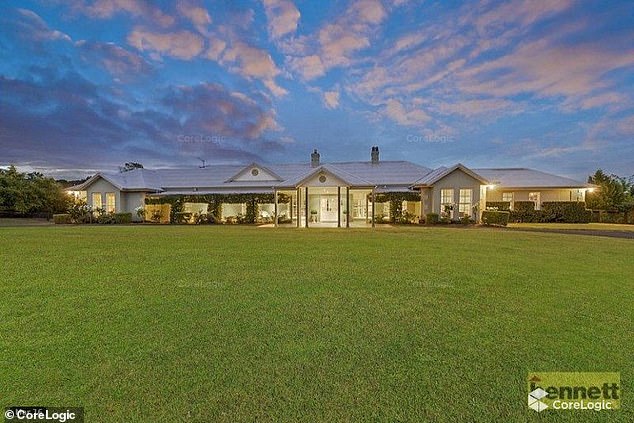 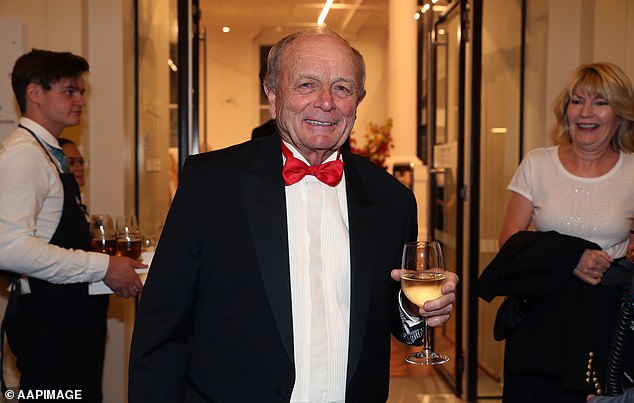 A spokesman for Mr Harvey (pictured) told The Age: ‘There will be no comment whilst the case is before the court. Any comment by either party could prejudice the proceedings’

When the house sold for $1,700,000 about four years after it was built, Mr Harvey built another house on a smaller block for Mr Dent and Ms Luker instead of paying the couple $400,000.

In her affidavit Ms Luker says Mr Harvey never increased Mr Dent’s salary from $5,000 a month in 15 years but her partner told her, ‘He won’t agree to a raise, don’t forget, we have the house’.

Ms Luker states Mr Harvey rang to express sympathy when Mr Dent died and delivered a eulogy at his funeral in the Trinity Grammar School Chapel at Summer Hill.

Two weeks later, according to her affidavit, Ms Luker rang Mr Harvey to ‘clarify about the house situation’ and he told her the original alleged deal was ‘nonsense’.

Mr Harvey allegedly told Ms Luker that Mr Dent ‘was not his responsibility and she was to move out and get the pension.’ 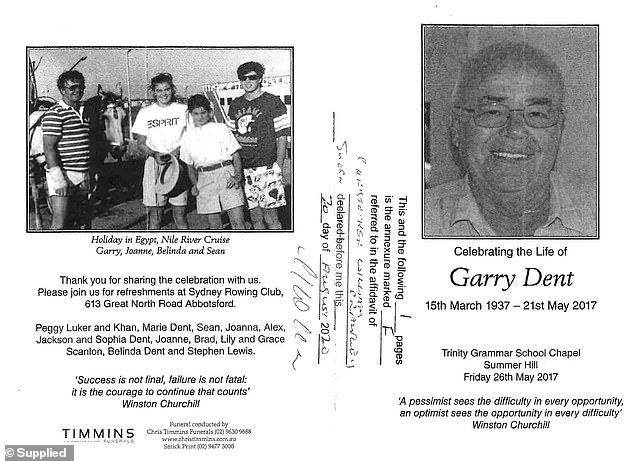 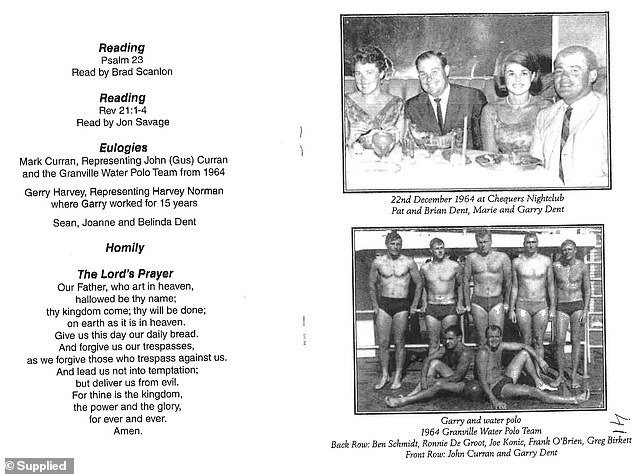 Ms Luker states in her affidavit she tried to resolve all her issues with Mr Harvey for three years before receiving a notice to leave the property on June 18, 2020.

‘You have occupied the Property rent free as a tenant at will,’ that letter said. ‘The Landlord requires You to vacate the Property on or before 10:00am on 20 August 2020.’

Ms Luker’s solicitor said his client was too ill to comment on Monday.

A spokesman for Mr Harvey told The Age: ‘There will be no comment whilst the case is before the court. Any comment by either party could prejudice the proceedings.’

Mr Harvey is chairman of Harvey Norman Holdings Ltd which owns the retail giants Harvey Norman, Domayne and Joyce Mayne. He is also a noted race horse owner and breeder.

The case is listed in the Supreme Court later this month for mediation.