M&S Bank is giving new credit card customers up to £25 to spend in store or online when they open a Reward Plus card account.

Cardholders earn 2,000 points – the equivalent of £20 to spend – the first time the card is used within 90 days of account opening.

And as a reward for spending at M&S, they’ll get a further 500 points added to their first quarterly rewards, worth another £5 to spend with the retailer.

Reward Plus: The card comes with £25 of vouchers to spend in store on online at M&S

They’ll also get double points – 2 for every £1 spent at M&S – for the first 12 months, reverting to the usual point per pound in subsequent years. From the outset, all other spending earns one point for every £5 spent, where one point is the equivalent of 1p to spend.

The card deal also comes with a year’s worth of interest-free purchases, before reverting to a rate of 18.9 per cent APR.

What’s more, balance transfers made in the first 90 days of the account being open are also interest-free for six months, but a handling fee of 2.9 per cent (with a minimum of £5) applies.

After six months, the rate for balance transfers also climbs to 18.9 per cent APR.

So what do the experts think? 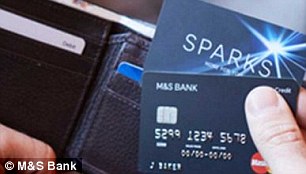 Loyalty: earn two points for every pound spent in M&S with the Rewards Plus card

Rachel Springall from the personal finance website Moneyfacts.co.uk said: ‘The new deal from M&S Bank is a fantastic offer for loyal shoppers, particularly as it comes at a time when many rewards or cashback on credit cards dwindle [see box below].

‘The interest-free perks will be hugely useful for shoppers looking to spread the cost of their spending. Shoppers must always be careful to keep up monthly repayments and pay back any debt before interest applies of course.

‘Credit cards with loyalty points may not be as fruitful as they may seem, however, the M&S card can give customers up to £20 upfront as a voucher – much better than some reward cards that become a bit “pointless”.

How does the deal compare to other reward card offers?

The most similar deal is that offered by the John Lewis/Waitrose Partnership card. It’s interest-free on purchases for nine months and balance transfers for 18 months (handling fee of 2.5 per cent applies). After the 0 per cent interest periods end, the card charges an APR of 18.9 per cent.

Points to prizes: turn your loyalty points into shopping vouchers with the Partnership card

Another card the new M&S offer card can be compared to is the Barclaycard Freedom Rewards card.

It offers 0 per cent interest on purchases for a year from the date you open your account, and on balance transfers made within 60 days of account opening. It comes with a pretty impressive discounted balance transfer handling fee of just 0.15. (Though somewhat confusingly a fee of 2.9 per cent is applied first and then the difference is refunded.)

After the 0 per cent period ends, interest is charged at 21.9 per cent APR, which is higher than both the M&S Bank Rewards Plus card and the Partnership card.

Loyalty points are earned at a rate of two points per pound spent at UK supermarkets, petrol stations and Transport for London and one point per pound everywhere else.

This is Money verdict

To summarise, the M&S Bank Reward Plus card may come with £25 free shopping with the retailer and beat the Partnership card on interest-free purchases but it’s worse for balance transfers.

But M&S Bank does have two other credit card deals that are far more generous than the Partnership card when it comes to balance transfers.

Shopping Plus is interest-free on all purchases and balance transfers (made within 90 days of account opening, 2.9% fee applies) for 25 months.

And Transfer Plus is interest free on balance transfers for 32 months (made within 90 days of account opening, 0.99% fee applies) and on purchases for six months.

The number of card providers offering a standard cashback deal has fallen over the past five years, according to Moneyfacts.co.uk. Many of those that do still offer cashback have cut their rates significantly. The personal finance website’s research found in 2012, brands including Bank of Ireland UK, Capital One, Creation Financial Services, Halifax, Leeds Building Society and Sainsbury’s Bank all had at least one credit card offering a cashback deal, but they have all since vanished.

The website’s Rachel Springall said: ‘There seems to be no end in the cull to rewards for credit card customers. Last week, MBNA joined the ranks of providers to pull its cashback deal for existing customers, in what has become a progressively shrinking market. The most common cashback return today is 0.50 per cent for everyday spending, which equates to just 50p for every £100 spent.

‘While there are still some introductory deals around, customers would be wise to check the terms. For example, American Express offers 5 per cent for three months on its Platinum Cashback Everyday Card, but this is a short-term offer and customers will find that it caps the cashback available at £100 over that period. They’d also need to spend £3,000 each year to qualify for cashback.

‘There are other cards out there that may seem appealing, like the Asda cashback card, but in fact, the maximum returns are only available on eligible spends and any gains would need to be converted into supermarket vouchers. Another alternative could be the NatWest Reward Credit Card where up to 1 per cent can be gained, but again, this return is only for spends in supermarkets, plus the card costs £24 each year for non-current account customers. Other alternatives include TSB, with its current account customers eligible for a credit card that pays 1 per cent cashback, capped at £5 per month.’