Get a Zoom! Couple are caught having SEX during Rio de Janeiro council video conference

Get a Zoom! Couple are caught having SEX during Rio de Janeiro council video conference

This is the moment one of the participants of a Zoom meeting forgot to turn his camera off and was caught having sex in the background.

The meeting was chaired by a member of the Socialism and Liberty Party, Leonel Brizola, who continued the discussion despite the scenes being relayed through the video feed.

It was a meeting for the Rio de Janeiro city council, which local newspaper Metropoles reported was about how to guarantee food for students in the municipal system during the pandemic.

The footage shows how the Zoom participant in the middle row on the right-hand side of the screen ‘left’ the meeting and started having sex on the bed in the background.

The meeting, which started at 10am, was apparently proceeding as planned when one of the participants stopped following the discussion and began to have sex in the background with the camera still rolling.

The man was not a councillor, according to local newspaper Globo.

The meeting reportedly continued for another four hours without further interruption.

The other councillors in the meeting reportedly noticed the scenes but decided to ignore it and continue to discuss the matter at hand. 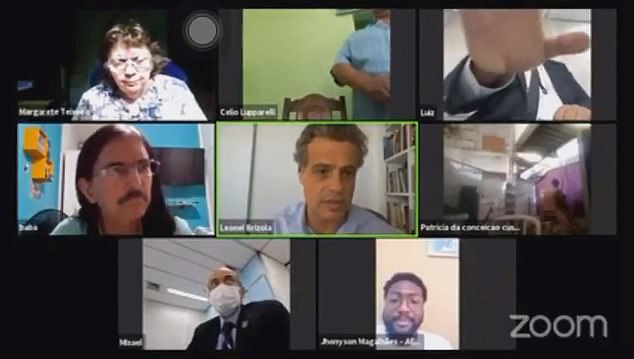 In a statement, Brizola said the episode was an ‘involuntary indiscretion’ and regretted that the actual topic of the meeting was not being highlighted in media reports.

Brizola said: ‘As soon as we noticed what was happening, we immediately asked the people controlling the audio and video of the participants to take it off the feed.

‘Us councillors and other participants do not have any input in controlling or editing videos on Zoom.’

He also made a point of highlighting the importance of the issue discussed, which for him ‘demonstrated the incompetence of a city that has resources, but fails to ensure that children’s rights are respected’.

It is unclear if the person involved has been punished for the incident.