Get down on lockdown! | Daily Mail Online

Get down on lockdown! Neighbours party on balconies of high-rise apartments in socially distant RAVE after police allowed event to go ahead as they were following restrictions

Neighbours partied on the balconies of their high-rise apartments in a socially distant rave – after police allowed the event to go ahead as they were following lockdown rules.

Nathan Jones took to an impressive disco booth on the roof of his van to launch a ‘get down on lockdown’ party for people living in waterside flats in Cardiff Bay.

The rave, which was organised to celebrate a 30th birthday, quickly attracted the attention of police, who told revellers to ‘carry on dancing’ when it became obvious they were abiding by stay-at-home rules.

Partygoers had dressed in their finest Casino-style outfits for the Las Vegas themed celebration, with one man seen in a bowtie and women wearing cocktail dresses.

Other residents danced in the communal garden of the gated community, all within lockdown rules, as flashing lights bounced from the high-rise block.

Mr Jones, who goes by DJ Motel Concierge, decided to DJ for the residents when he discovered they had organised to gather on their balconies and sing Happy Birthday to his friend’s partner.

‘It was my friend’s partner’s 30th birthday and they had organised to gather on the balconies and sing Happy Birthday and have some drinks so I suggested I could DJ,’ he said.

‘They said it was going to be a Las Vegas theme because they were supposed to be going to Vegas this weekend for his birthday.

‘I checked it was OK with the management and everyone but about halfway through the police turned up.

‘They checked that everything was OK and everyone was keeping two metres apart and not gathering together. Then the officers said: “You’re fine to carry on”.’ 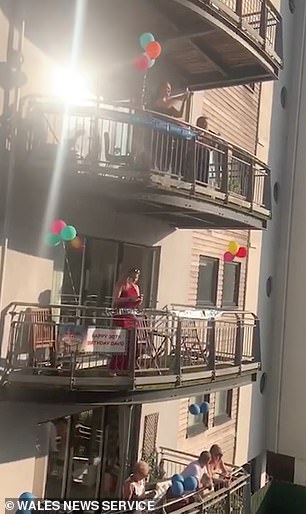 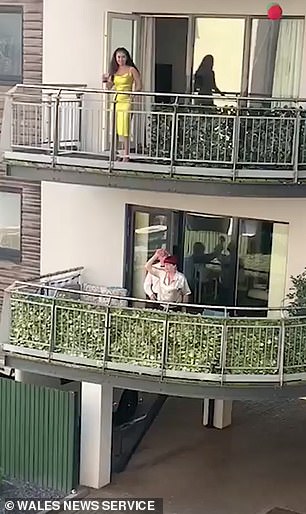 Pictured: Residents in Cardiff dressed in cocktail dresses and suits for the Las Vegas themed party 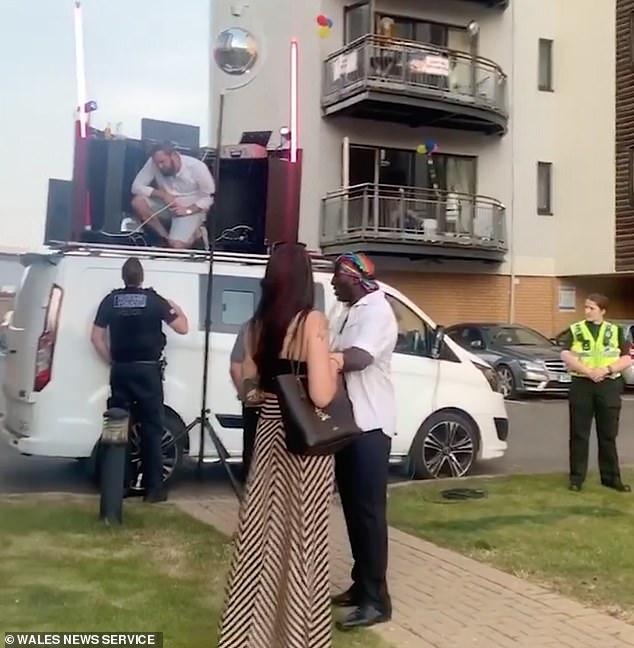 The rave attracted the attention of police (pictured), who told revellers to ‘carry on dancing’ when it became obvious they were abiding by stay-at-home rules

Mr Jones converted his Ford van into a mobile DJ booth which he has dubbed ‘Disco Vandross’ so he can continue to play songs to people throughout the lockdown.

He said: ‘It took me about a week to do with the planning and everything. I had to construct the roof rack myself from scratch and make sure it was strong enough to hold the weight of me and all of the equipment.

‘I’m just happy I could bring a smile to a few people’s faces. The dancing was brilliant and everyone seemed to have a good time.’

One neighbour said: ‘It was brilliant fun. We didn’t know what it was going to be like – but everyone was out dancing on their balconies.

‘The police came along and we thought they would stop it. But everyone was at a safe distance from each other so we were very grateful for the police to allow it to carry on.

‘It really bucked up our spirits.’