‘Get us out of here’: Britons call on government to come and get them from China

Britons stranded in China have called on the government to come and get them as the coronavirus crisis deepens.

The Hubai province is currently on lockdown as the country struggles to contain the virus which has so far killed 56 people.

Home Secretary Priti Patel said the Government was ‘looking at all options’ to help Britons leave Wuhan following reports that officials have been asked to examine the logistics for an airlift from the city.

Some British ex-pats, and those visiting the country, have said they are not happy with the government’s response and have implored authorities to ‘get us out of here’.

Dr Yvonne Griffiths, 71, from Thornhill in Cardiff, has been posted in Wuhan for three weeks with two colleagues from Birmingham City University.

Dr Yvonne Griffiths, 71, from Thornhill in Cardiff, has been posted in Wuhan for three weeks with colleagues from Birmingham City University 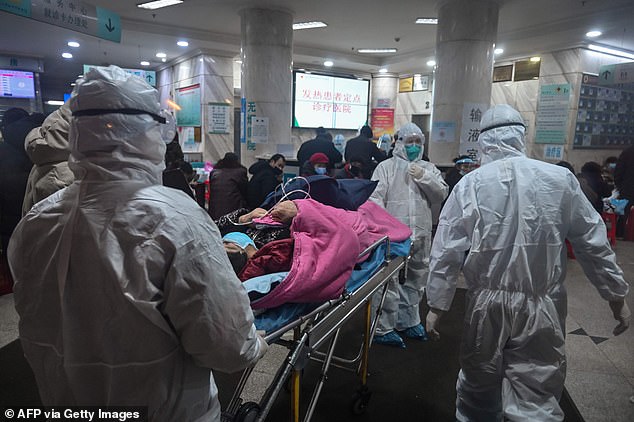 ‘Although there’s been so much in the media about the virus and about the risk of students travelling back and forwards from the UK, there doesn’t seem to be anything about stranded individuals like ourselves,’ Dr Griffiths told the BBC.

‘And it seems maybe the British government has a lack of either concern or lack of planning in place, I’m not sure. I think there’s a lot of uncertainty – that’s what’s frustrating at the moment as much as disappointing.’

The university had arranged for the English language lecturer and her colleagues to fly back on Monday but there have been no updates on when the airport will re-open.

The Foreign Office has said it is available to provide assistance and was last night preparing to charter a flight for 200 citizens and diplomats to be evacuated from Wuhan.

Dr Griffiths, however, said she had tried calling the consulate in Wuhan on Saturday but ‘of course, it’s the weekend so no one is answering.’ 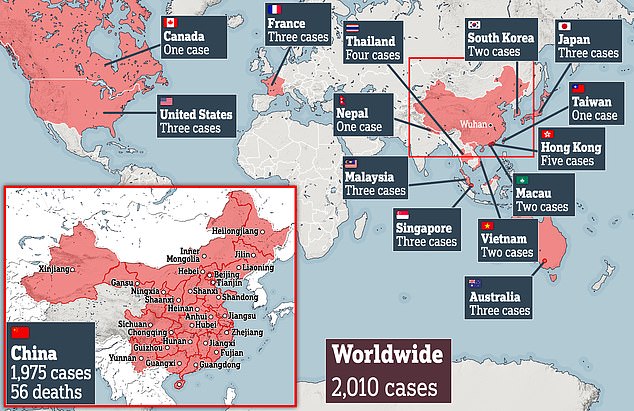 There have been 1,975 cases in China and a total of 2,010 cases worldwide, with three in France

She feels that British people in the midst of the global health crisis have been left to deal with the problem themselves.

Dr Griffiths’ daughter Bethan Webber said she and her mother were struggling to sleep with the stress of the situation.

Dr Griffiths described the streets in Wuhan as ‘completely deserted’ and that she had been advised to remain in the hotel where people are wearing face masks.

The virus has so far killed at least 56 people and another 1,900 have been infected with millions across China put on lock-down.

As of Sunday afternoon, 52 people across the UK had been tested for the deadly flu-like virus, but all tests were confirmed as negative.

From his apartment in the city, British PE teacher Kharn Lambert looked out at the deserted streets with mounting anxiety, but was most concerned about his visiting 81-year-old grandmother, Veronica Theobald. 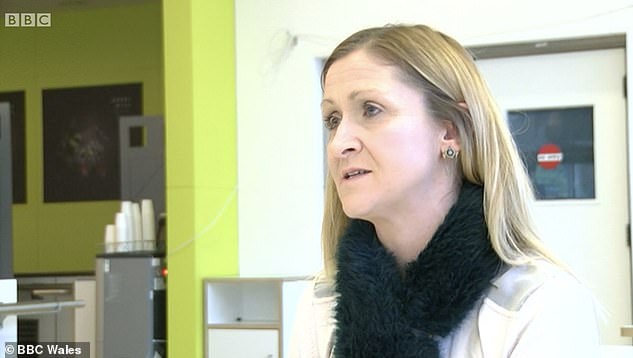 The pensioner, from Lancaster, is too frightened to go out because her debilitating lung condition – chronic obstructive pulmonary disease – means that she may not survive a bout of the deadly coronavirus which has already claimed 55 lives as it sweeps across central China.

‘She needs about 18 different medicines each day and, if she caught this virus, I’m afraid it would kill her,’ Mr Lambert, 31, said last night.

Mrs Theobald arrived in Wuhan in early December and was due to return to the UK tomorrow but her flight was one of those cancelled when the city was effectively closed off to the world on Thursday. She has just a week’s supply of her vital drugs left.

As Mr Lambert and his grandmother waited anxiously, elsewhere in the city yesterday British expats were exchanging angry messages on social media about the apparent intransigence of the Foreign Office in response to their pleas to ‘get us out of here’. 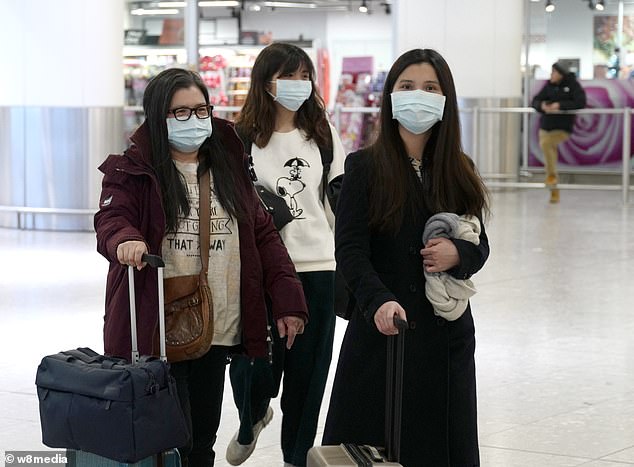 Passengers arriving at heathrow airport wearing masks, so far there have not been any confirmed cases in the UK

Another unnamed member of a WeChat group – the Chinese equivalent of WhatsApp – stormed: ‘There hasn’t been any engagement with the British citizens in Wuhan by the Foreign Office.

‘It’s an utter p***take that we’re being left here like this.’

Last night the Government finally relented, concluding that the threat posed by the virus was ‘worse than they had realised’, and in a dramatic U-turn announced they were devising plans for an airlift of British nationals.

After The Mail on Sunday told Mr Lambert of the development, he said: ‘The French and American embassies seemed to be doing everything they could to provide their citizens with every opportunity to leave the city, while the Foreign Office appeared to be sitting back to see how things developed.

‘I’m glad they’ve finally seen sense to get us out of here, but I have to say that, since the lockdown, no one in any official capacity tried to connect with the British community in Wuhan to see if there was anything that we could be assisted with.’

It comes as other anxious foreigners, including thousands of students, said they were not receiving consular assistance despite their desperation to flee China.

‘In the past week we’ve not been able to go out and buy anything to eat,’ said Mashal Jamalzai, a political science student from Afghanistan at Central China Normal University.

He told AFP that he and his classmates had been living on biscuits, and his embassy had not responded to requests for help.

‘We want to be evacuated as soon as possible, because either the virus, the hunger or the fear will kill us,’ Jamalzai said.

Thousands of foreign students and other international residents live in Wuhan, a normally bustling transport hub in central China home to a huge steel and auto industry.

But with schools, hospitals and public offices shut and no transport to and from the city, Hubei University student Siti Mawaddah says the city now ‘looks like a ghost town’.

‘The situation in Wuhan right now is very intense and worrying,’ the 25-year-old Indonesian told AFP, adding that the situation had taken a psychological toll on her and her classmates.

‘If we stay in Wuhan, it’s as if we’re just waiting for our turn to get infected,’ she said.

Mawaddah said she had heard the United States plans to evacuate consular staff and some American citizens living in the city, and hoped her own government could do the same.

There are also no confirmed diagnoses in UK citizens abroad, and the risk to the public is still classed as low. 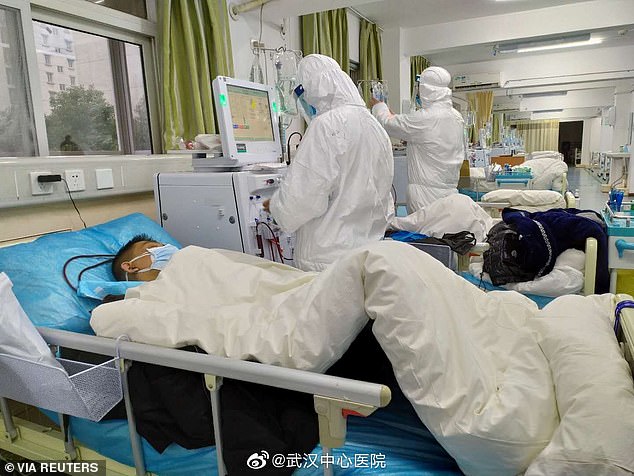 Meanwhile, health officials are continuing to track down around 2,000 people who have recently flown into the UK from Wuhan, the area of China worst affected by the outbreak.

The Department of Health confirmed it is trying to find ‘as many passengers as we can’ who arrived from the region in the past two weeks to check on their wellbeing.

Suzan Tokdemir, 51, an English teacher, took the photos after flying into Beijing International Airport on Saturday evening after travelling on an almost-empty flight into the Chinese capital city from Hong Kong.

In another the outside of the airport, only three people could be seen in a usually packed area.

The airport in the Chinese capital city has ranked second-busiest airport in the world every year since 2010, and usually sees around 100 million passengers pass through it a year. 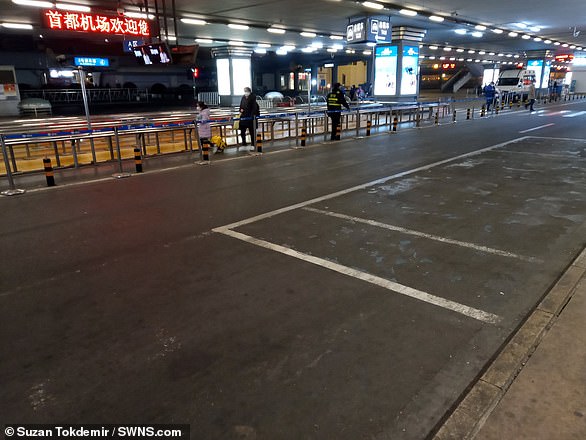 Suzan Tokdemir, 51, an English teacher, took the photos after flying into Beijing International Airport on Saturday evening after travelling on an almost-empty flight into the Chinese capital city from Hong Kong

Ms Tokdemir, who teaches English at an international middle school in Beijing, said: ‘It was quite eery. It’s not what you’d expect at Beijing Airport. 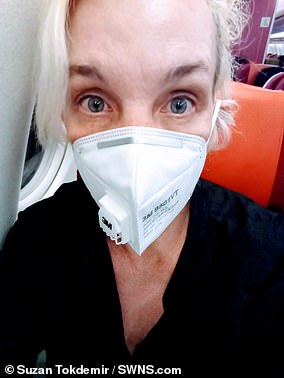 ‘It took me 15 minutes from getting off the plane to standing outside the front of the airport – that included collecting my luggage, passport check, fingerprint scan, everything.

‘On the flight, there were only about 50 passengers. I looked around as was getting off the plane, and I estimated there can’t have been much more than 50 people.

‘It was one of the big planes, with eight seats across in a row, but they put us all at the back of the plane – the front half of the plane was completely empty.

‘All the flight attendants were masked, and most of the passengers were too.. They took them off to eat the food and then put them straight back on.

‘Before we got off, they came round and disinfected the plane, and there was an announcement telling people to declare any symptoms they might have,’ Ms Tokdemir added.

‘Even at Hong Kong airport, almost everyone was masked,’ she said.

‘At Beijing International Airport, we had to keep taking our masks off, so that our faces could be identified – which sort of defeats the point.’

And she added that even the motorway in Beijing was ’empty’, saying: ‘Usually you can hardly move on the motorway. The coronavirus has emptied Beijing.

‘I had hired a driver to take me home, and he got stopped by masked police on the way back and had his temperature checked. 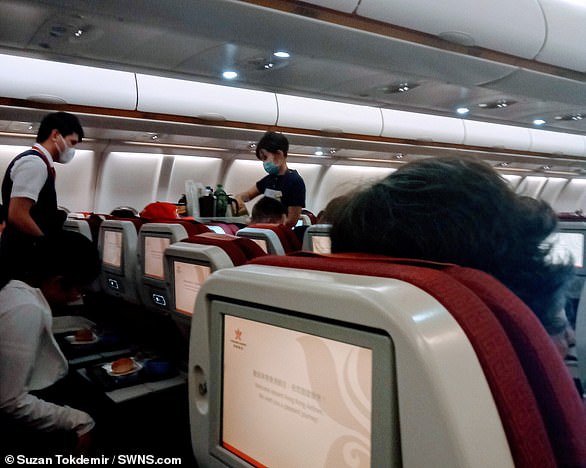 ‘It was really spooky, it was like something out of a sci-fi movie,’ said Ms Tokdemir.

She is due to return to work on February 7, after four weeks off to mark Chinese New Year.

But Ms Tokdemir said that some of her colleagues, who have left the country during the break, are unsure about whether to return.