Getting holidays back on track: How trains can beat planes if you’re heading to Europe this summer

Getting holidays back on track: How trains can beat planes if you’re heading to Europe this summer

Every week our Holiday Hero Neil Simpson takes an in-depth look at a brilliant holiday topic, doing all the legwork so you don’t have to. This week: How trains can beat planes if you’re heading to Europe this summer.

Among holidaymakers with concerns about catching Covid-19, trains are a slower but safer route to the sun.

Fans of Eurostar, which runs direct from London to Paris, Brussels and Amsterdam, say it’s the perfect way to begin your travels.

Slow train to the sun: The Glacier Express on its way to Italy

For starters, forget about sharing a crowded airport terminal with thousands of passengers coming and going from all around the world – the only people allowed through security at London’s St Pancras station are passengers who are booked on to the next two departures.

Boarding can feel safer too. Gone are hundreds of fellow plane passengers passing through one or two doors and touching dozens of seat backs as they squeeze up the aisle to their row. Instead you’ll be directed along the platform to the front or rear doors of your carriage. Only those with reservations can enter and each carriage has its own toilet.

Take the train to Europe and you also avoid airline-style rows of three. Train seats are two abreast at most. Even in standard class, extra leg room and wider seats mean you’re a little further from other passengers than on a budget airline.

Pay for Premier Class and couples can create a bigger bubble by reserving a pair of single seats facing each other across a table.

And touch-free passport controls are being trialled, where instead of stopping at immigration desks, passengers are identified by facial recognition technology. But for all these advantages, trains won’t always beat planes. You still face queues at security, travel times are longer and fares are higher.

However, the range of train-based trips is set to expand in July as the world reopens. Here are some of the best ideas for a safety-first rail journey.

The big four direct destinations with Eurostar are Paris, Disneyland Paris, Brussels and Amsterdam. A direct, standard-class return to Amsterdam for a long weekend in September starts at £102 and takes just under four hours. 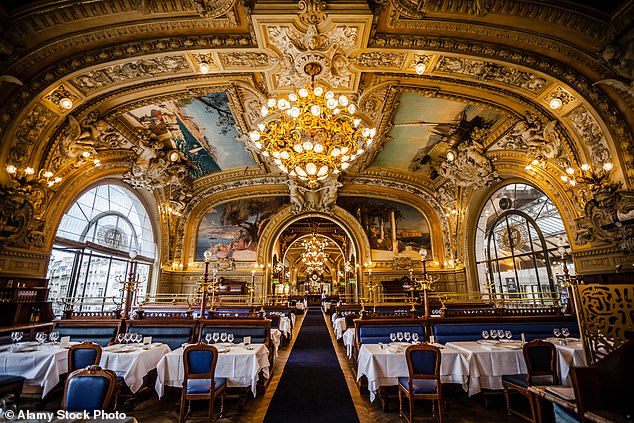 Or enjoy old-world glamour on a seven-day Biarritz and the Atlantic Pyrenees tour with Great Rail Journeys, from £1,445pp departing from St Pancras. As well as trips to San Sebastian and Bayonne, a big attraction is having your luggage sent ahead for free, so you don’t have to carry heavy bags on the train.

Options open up if you’re happy to change trains in Paris.

Fancy Barcelona? Then consider a ticket on the high-speed double-decker TGV trains.

Once there, you’ll have time to follow in the footsteps of Salvador Dali and Brigitte Bardot by stopping for lunch in the glorious, art nouveau Le Train Bleu restaurant.

Then board the TGV and you’ll be in Barcelona in time for tapas and cocktails.

If you’d prefer to be guided through a long-distance train trip, firms such as Great Rail Journeys and Rail Discoveries offer fully escorted tours from London.

A top choice for healthy fresh air is the nine-day Glacier Express tour with Rail Discoveries that includes St Moritz and Tirano in Italy from £1,599pp.