It’s a kitchen staple that millions of us use every week but if you keep your olive oil next to the oven or the hob, you could be ruining the flavour.

Cooking experts at Good Housekeeping Institute (GHI) have revealed that keeping olive oil in a warm and well-lit place – such as next to your stovetop – will give it a mustier flavour that will become more vinegary over time.

The best place to store it is in a dark, cool place with the lid kept tightly on – but be warned, as it doesn’t last as long as you might think.

Olive oil shouldn’t be exposed to heat, light or oxygen otherwise it can turn rancid more quickly – so even though it’s handy, it’s best not to keep it next to the stovetop or oven

Unlike wine, olive oil doesn’t get better with age, but an unopened bottle can last for up to two years if you keep it between 14C and 18C in a dark place.

However as soon as you open a bottle, you should use it within six months so that it tastes its best, according to the GHI experts.

Oxygen, light and heat are the three main enemies of olive oil, the guidance states. 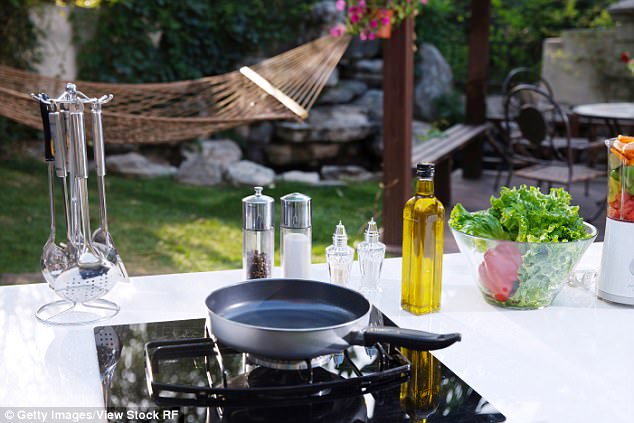 Olive oil is a staple ingredient in the healthy Mediterranean diet and is said to have plenty of health benefits, including reducing the risk of diabetes

It’s why keeping it next to the hob will make it turn rancid more quickly, even though it’s the handiest place to store it.

Extra-virgin olive oil should be looked after with even more care, as it’s pricier and has a better flavour, which makes it ideal for drizzling on salads and pasta dishes.

It should never be cooked with, as the heat will destroy the intense flavour.

Finishing dishes with plenty of extra-virgin olive oil, which is made from the first pressing of olives, is said to help reduce levels of bad cholesterol as it contains antioxidants and monounsaturated fatty acids.

It’s also reported to help give shinier hair and assist with weight loss.