Ghost Fleet: US Navy plans for a fleet of massive unmanned $1bn vessels

Ghost Fleet: US Navy reveals plans for a fleet of massive unmanned $1bn vessels for ‘dirty and dangerous’ missions

The US Navy wants to buy ten massive robotic ships as part of its Ghost Fleet within the next five years, capable of being deployed on ‘dirty and dangerous’ missions.

The 300ft vessels, packed with anti-air and cruise missiles, will weigh in at some 2,000 tons and the first two are billed at $400million.

Similar to the smallest ‘rated’ class of warship, the Corvette, the Navy wants them deployed on ‘three D missions.’ That is missions which are ‘dull, dirty and dangerous.’

They are deployed in situations demanding super-human physical endurance, on missions which pose a high risk of injury, death or capture.

The Sea Hunter is a 132ft vessel the US Navy recently sent from San Diego to Hawaii and back, the fist unmanned vessel to do so. But they want a fleet of far larger unmanned warships 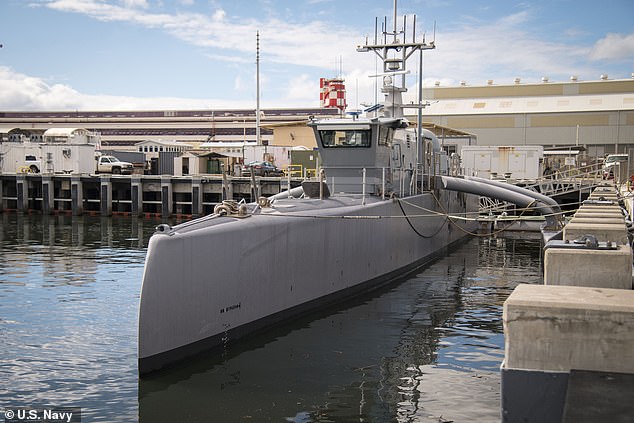 The Sea Hunter after arriving at Joint Base Pearl Harbor-Hickam, Hawaii. The Navy wants to use unmanned vessels in missions it considers are too ‘dangerous and dirty’ for sailors to be put at risk

The Navy already has the Sea Hunter, a 132ft unmanned vessel, which recently sailed from San Diego to Hawaii and back.

The Navy announced last Wednesday it had plans to expand its Ghost Fleet with much larger vessels.

The plans are part of the Pentagon’s desire for ‘attritable’ warfare systems, those technologies which are low-cost, reusable and ultimately disposable weapons.

Of pressing concern to the Navy are new Chinese DF-21D and DF-26 missiles, which can pulverise the greatest vessels in the Naval fleet from hundreds of miles away.

Alan Shaffer, deputy under secretary of defense for acquisition and sustainment, told  USNI News: ‘We have to guard against things like the DF-21, DF-26 and the whole plethora of Chinese missiles that can reach out and strike a surface fleet or territory out as far as Guam.’

The unmanned warships can also be sent ahead of manned vessels on scouting trips. They are rapid, highly manoeuvrable, have colossal range and endurance.

These boats have been put through the rigour of war-games and the Navy is satisfied they want the vessels on the seas.

Overlord believes the acquisition of purpose built massive UVs can accelerate their aims to have an operational unmanned fleet in the near future. 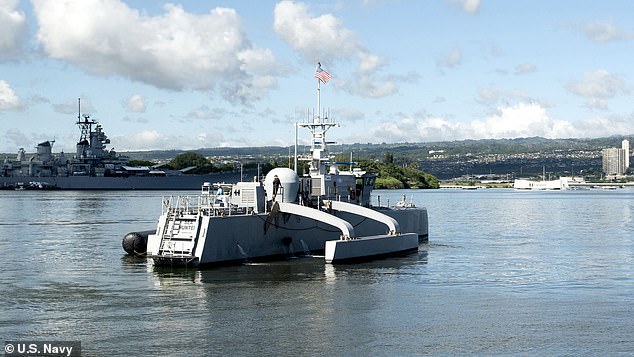 The Office of the Secretary of Defense states: ‘The Navy is able to rapidly initiate the LUSV (large unmanned surface vessel) program in FY 2020 as a direct result of transitioning the Ghost Fleet Overlord technology.