‘Giant’, 22, stands at 7ft 9in tall after not being expected to live past his teens

A man who measures an astonishing 7ft 9ins has landed his dream job working at a sports centre.

Broc Brown, from Michigan, was once crowned the ‘world’s tallest teen’. He was not expected to make it past adolescence.

The now 22-year-old was born with Sotos syndrome, a genetic disorder also known as cerebral gigantism.

Mr Brown, who was 5ft 2ins at nursery, has always needed custom-made clothing and even sleeps in an 8ft-long bed.

His abnormally large BMI has caused him to develop diabetes, while his imposing stance means he struggles to walk.

Mr Brown has finally realised his life-long dream of working at a sports centre and hopes to one day open his own restaurant. 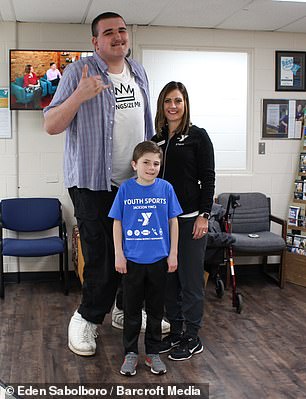 Broc Brown suffers from gigantism and measures an astonishing 7ft 9ins. The 22-year-old is pictured left at his home in Michigan on April 20. After a ‘challenging’ 22 years, Mr Brown has finally landed his dream job working at a sports centre. He is pictured right with his supervisor Megan Hunt and a young customer. The job is ‘the most important thing he has’ 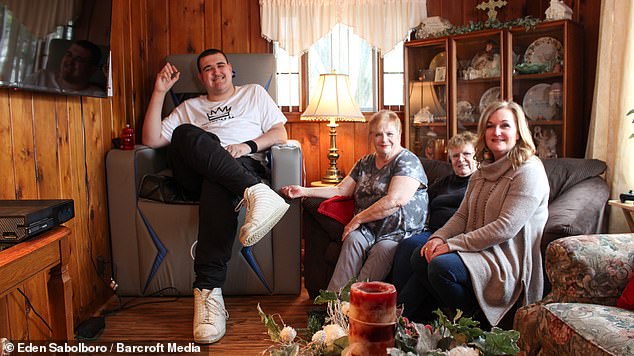 Mr Brown, who was once crowned the ‘world’s tallest teen’, was not expected to make it past adolescence after he was born with the genetic disorder Sotos syndrome, also known as cerebral gigantism. He is pictured in a custom-made chair surrounded by his family

Mr Brown was diagnosed with Sotos syndrome when he was just five years old, after doctors noticed he was towering over his peers.

As a teenager, Mr Brown grew at an astonishing rate of 6ins a year and was 7ft throughout secondary school.

His mother Darci previously said: ‘It’s a genetic disorder and there’s nothing that can stop him from growing – I don’t know if he will ever stop.’

Although he defied the odds to survive, Mr Brown was recently diagnosed with diabetes, which doctors have put down to his height.

WHAT IS SOTOS SYNDROME?

Sotos syndrome is a genetic condition that causes ‘overgrowth’, leaving patients ‘significantly taller’ than their peers.

However, many cases are thought to go undiagnosed.

Sotos is also defined by its characteristic facial features, which include a long, narrow face; high forehead; flushed cheeks; and a small, pointed chin.

Patients tend to be very tall during childhood, however, ‘adult height is usually in the normal range’.

Speech problems are also common, with many having a stutter or monotone voice.

Curvature of the spine, seizures, hearing loss, and defects of the heart and kidneys can also occur.

Up to 90 per cent of cases come about due to mutations in the NSD1 gene.

NSD1 controls the activity of other genes that are involved in growth and development.

Around 95 per cent of cases occur ‘randomly’, with the remainder being thought to be inherited.

Sotos has no standard course of treatment.

His stance also means he struggles to move or walk long distances.

Sotos syndrome also caused Mr Brown to be born with only one kidney.

This makes his diabetes more difficult to manage, with the condition being the leading cause of kidney disease, according to the National Institute of Diabetes and Digestive and Kidney Diseases.

Sotos syndrome has also left Mr Brown with learning difficulties, a strain on his heart, curvature of the spine and narrowing of the spinal cord.

Despite living in near-constant pain, Mr Brown has always aspired to have a job.

In 2016, he said: ‘I dream of working in a sporting goods store when I’m older, hopefully I can make that happen.’

‘This job means so much to me,’ he said. ‘It’s like the most important thing I have.

‘I started as a member at the YMCA and, one day, they offered me a job there.

‘It was really nice of them and I couldn’t believe it.

‘I said to myself, “you can do this, you can go out there and do this job”. I’m really happy I managed to get it.’

Mr Browns helps out with checking the children in for the day and sending them to the right sport classes.

His supervisor Megan Hunt could not be more pleased with the work he is doing.

‘I have been working with Broc for more than two months now,’ she said.

‘At first, I thought he was shy and quiet but that’s definitely not the case. He is funny and is really great to work with.

‘He’s very dependable and it’s nice to have a familiar face around for the kids.

‘Since he started here, he’s definitely become famous. People are always really happy to see him.

‘We’re going to look at adding more responsibilities to Broc’s job too, in the near future.’ 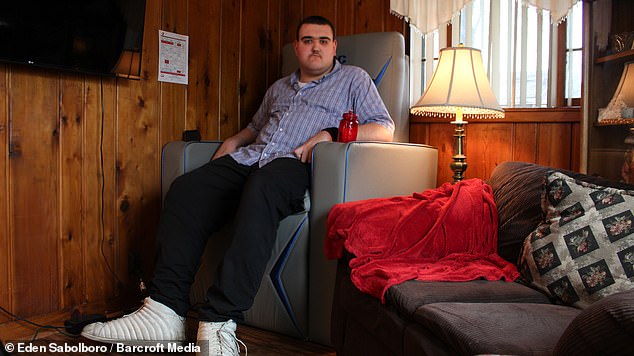 His abnormally large BMI caused him to develop diabetes, while his imposing stance leaves him struggling to walk. Mr Brown also has learning difficulties, curvature of the spine and a heart defect. And he was born with one kidney, which makes his diabetes difficult to manage 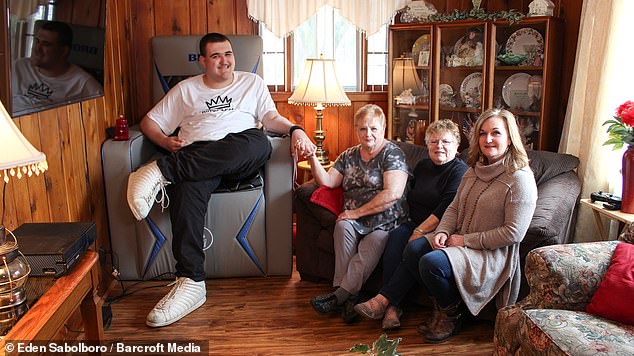 Despite all he has endured, Mr Brown has managed to stay positive. His aunt Stacy Snyder, 47, said:  ‘Broc is a great young man.

‘Everybody is amazed when they see Broc out and about due to his stature and that he weighs over 500lbs!’

Mr Brown struggles to straighten his knees, with his stooped posture leaving him in near-constant pain.

‘We have a very close family, and we’re all so proud of him for landing this job and going out there and achieving his dream,’ she said.

‘It’s very important for Broc to have a job, because he has always had a hard time in his education and it keeps him active.

‘He has some special needs that come with the condition, affecting his physical and mental state, so he hasn’t always been able to hang around with a lot of people.

‘So this job just gives him a sense of being an adult and having some responsibility.’ 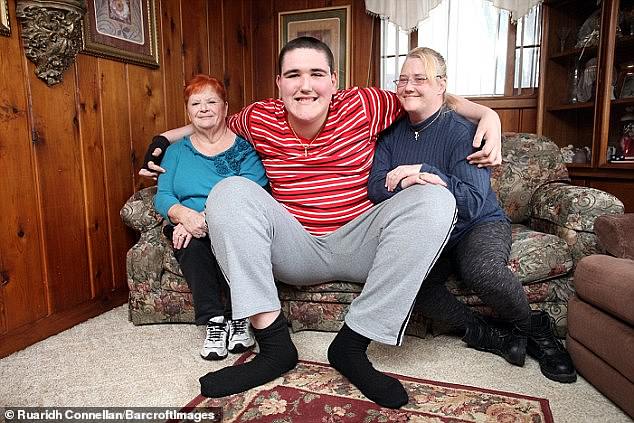 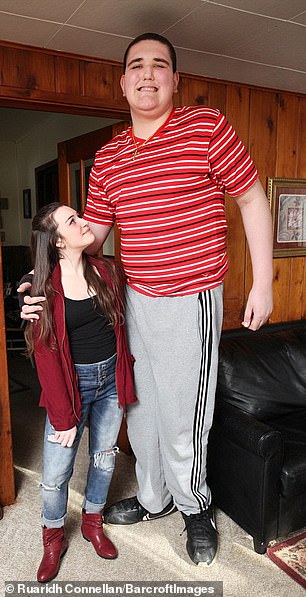 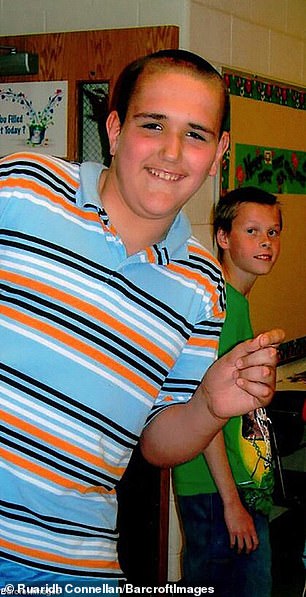 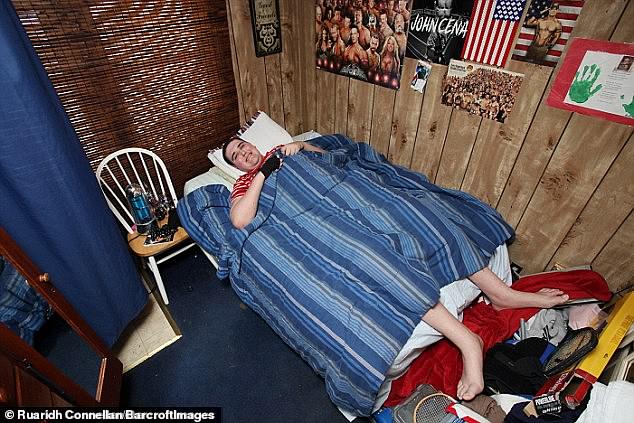 Mr Brown sleeps in a custom-made bed that is 8ft long, which his community fundraised for

Ms Snyder claims she is one of the few people her nephew feels comfortable confiding in.

She helped to raise Mr Brown while his single mother, who has been in hospital for three years, battled health problems.

‘Broc is a survivor,’ Ms Snyder said. ‘In his 22 years, he has overcome a lot of challenges.

‘But I always think it comes back to his wonderful personality. He’s a very forgiving soul. He’s a very kind soul.

‘I think he’ll continue to do well and obviously his health is of the most importance.’

Mr Brown has amassed an impressive following online, with more than 18,000 people keeping up to date with his journey on Facebook.

Mr Brown is looking forward to progressing in his career.

‘I’m so pleased to have my job now – it keeps me busy and I’m not so bored,’ he said. ‘My family do really good by me, to help me. I’m doing good right now.

‘For my future, I want to start making more cash. I want to own my own business for sure, maybe a restaurant.’ 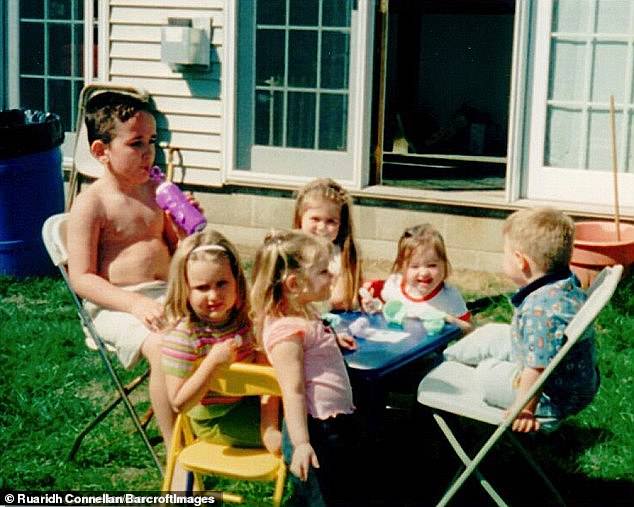 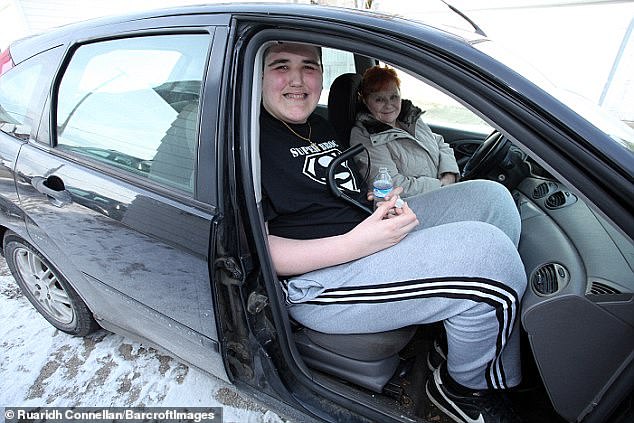 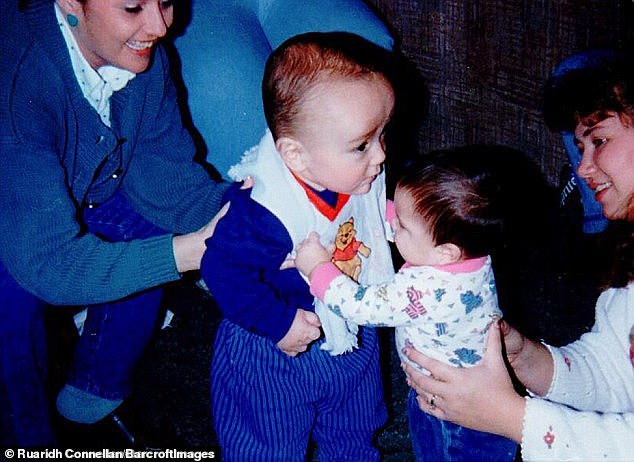 Even as a baby, Mr Brown was noticeably taller than the average infant