Giant fish from 380 million years ago was a suspension feeder

A giant fish that lived around 380 million years ago fed in a similar way to basking sharks, the second-largest living shark in the world today, scientists report.

The Titanichthys, from the class of pre-historic fish called the placoderm, was a suspension-feeder – it captured and ingested food particles suspended in water.

A Titanichthys fossil that was found in the Sahara Desert confirmed the creature had a narrow lower jaw without the sharp edges needed for cutting.

The fossils also showed the creature’s jaw wouldn’t have supported the mechanical stresses needed to chew and bite.

Titanichthys jaws were less resilient than those of other placoderm species that fed on large or hard-shelled prey during the so-called Devonian period – 140 million years before the first dinosaurs roamed Earth.

An artist’s impression of Titanichthys, a giant armoured fish that roamed the prehistoric oceans 380 million years ago

‘We have found that Titanichthys was very likely to have been a suspension-feeder, showing that its lower jaw was considerably less mechanically robust than those of other placoderm species that fed on large or hard-shelled prey,’ said lead author Sam Coatham at the University of Bristol’s School of Earth Sciences.

‘Consequently, those feeding strategies – common amongst its relatives – would probably have not been available for Titanichthys.’

The Titanichthys genus has long been known as one of the largest animals of the Devonian period, likely exceeding 16 feet (five metres) in length. 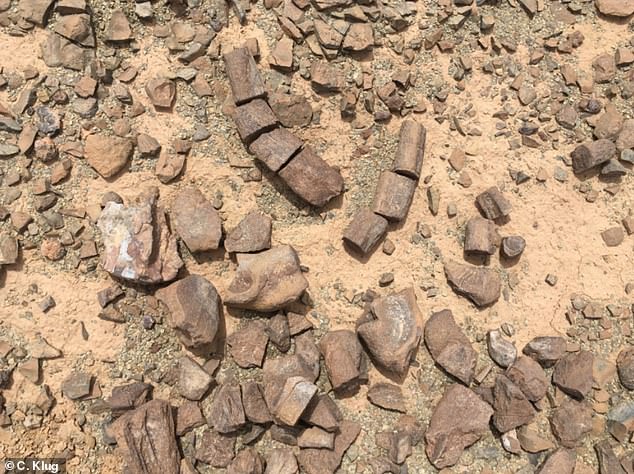 Titanichthys fossils used in the study, as they were found in the he Moroccan part of the Sahara Desert

PLACODERMS WERE COVERED WITH ARMOURED PLATES

Placoderm is any member of an extinct group (Placodermi) of armoured and jawed fishes.

Placodermi, which translates as ‘plate-skinned’, refers to the armoured plates around its exterior.

Placoderms existed throughout the Devonian Period, about 416 million to 359 million years ago.

During the Devonian they were a dominant group, occurring in all continents except South America in a variety of marine and freshwater sediments.

While this is less than the length of today’s basking shark – which reaches lengths of around 26 feet – both register a lower jaw exceeding 3.2 feet (one metre).

‘The lower jaw of Titanichthys we investigated was over three feet long and still slightly incomplete – so it was definitely large,’ said Coatham.

While it has been assumed that Titanichthys was a suspension feeder, there had been no previous evidence of this until now, the researchers claim.

To learn more, the team used fossils of Titanichthys already found in the Moroccan part of the Sahara Desert by co-author Christian Klug, a German paleontologist at the University of Zurich.

The team used virtual simulations of the Titanichthys to work out the biomechanics of its jaw and compare it with that of other species.

The team tested the resilience of the fossilised jaws by virtually applying forces to assess how likely each was to break or bend. 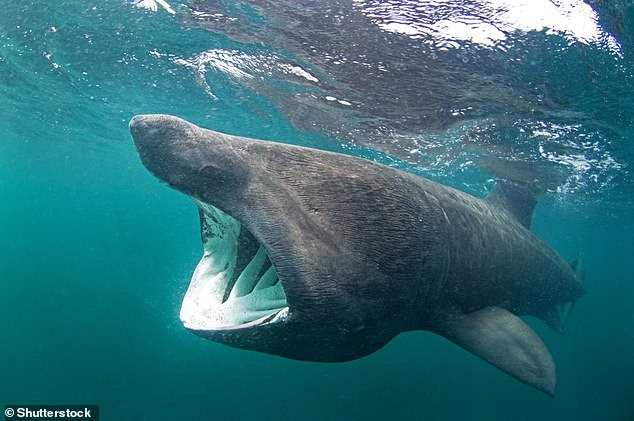 A basking shark (etorhinus maximus) off of Coll island, Scotland. Research showed similar patterns in stress resistance between bone mechanisms of Titanichthys and the basking shark

The lower jaw of Titanichthys was much less resistant to stress and was more likely to break than those of the other placoderm species, such as the Dunkleosteus – which could quickly open and close its jaw to deliver a strong and fatal bite.

Incidentally, Dunkleosteus would have taken a bite out of the more docile Titanichthys, Coatham said.

‘Titanichthys fossils have been observed with puncture marks caused by Dunkleosteus – an apex predator and one of few species which approached the size of Titanichthys.’

‘I suspect Dunkleosteus would have been one of its only potential predators – akin to modern basking sharks only being predated by killer whales and potentially great white sharks.’ 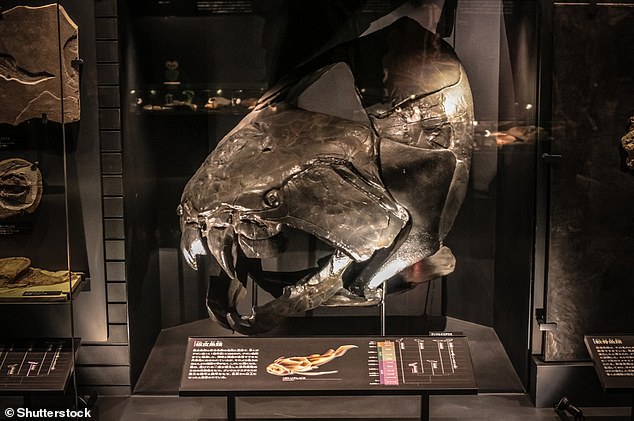 Dunkleosteus armoured head fossil at National Museum of Nature and Science Tokyo. Dunkleosteus was a largest predatory armoured fish from the Devonian period

The research team found that the jaw of Titanichthys likely would not have been able to withstand the higher stress associated with feeding on large prey, which exerted more mechanical stress on the jaws.

Instead, it would have swam slowly with its mouth opened wide to capture high concentrations of plankton – a technique called ‘continuous ram feeding’.

Further analyses comparing the distribution of stress across the jaws showed similar patterns in Titanichthys and the basking shark.

Today’s basking sharks, so named because they often look like they are basking in the sun, and whale sharks are both types of filter-feeding sharks.

Both these modern species, which are the second and first largest fish species in the world, respectively, are listed as endangered by the IUCN Red List.

The similarities of both of these modern species to the Titanichthys could help conservation efforts, the research team claim.

‘We suggest a link between oceanic productivity and the evolution of Titanichthys, but this should be investigated in detail in the future,’ said Coatham.

‘An established link could have implications for our understanding of the conservation of modern suspension-feeders.’

The study has been published in Royal Society Open Science.

THE BASKING SHARK IS THE SECOND-LARGEST FISH IN OUR OCEANS 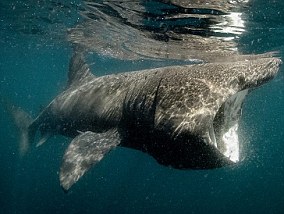 Basking sharks are the second-largest fish alive after whale sharks.

While they typically grow to 20-26 feet long, they’ve been known to hit staggering lengths of up to 32 feet.

But, these giants are relatively harmless to humans.

According to the NOAA (National Oceanic and Atmospheric Administration in the US), they ‘are considered passive and no danger to humans other than that posed by their large size and rough skin.’

They feed on zooplankton, swimming slowly just beneath the surface with their mouths open in a terrifyingly wide gape to filter the tiny organisms from seawater.