The first keg has been tapped, and the beer has started flowing as the 186th Oktoberfest began this Saturday in the German city of Munich.

Mayor Dieter Reiter inserted the tap in the first keg with two blows of a hammer and the cry of ‘O’zapt is’ – ‘it’s tapped.’ As tradition demands, he handed the first mug to Bavarian governor Markus Soeder.

The festival grounds were so overcrowded before the first steins could be filled that security guards would only allow entry only for people with reservations in one of the beer tents.

Dirndl kind of day: It is tradition for both men and women to attend the festival in the classic folk clothing, including brightly coloured dirndl dresses (as above) 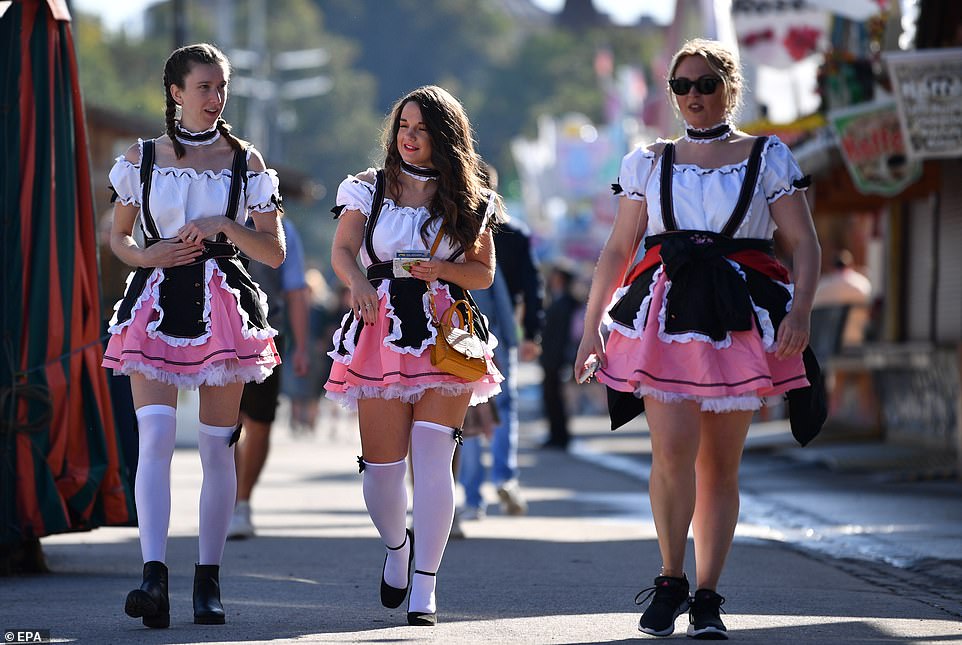 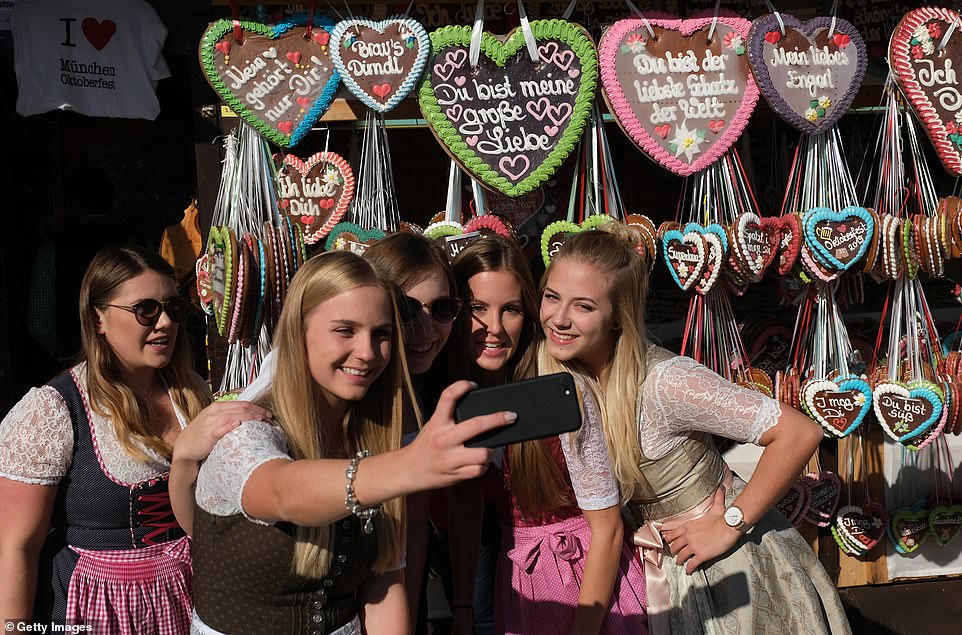 Girls gang together for a quick selfie in front of brightly frosted cookies, each exclaiming their love for the lucky recipient 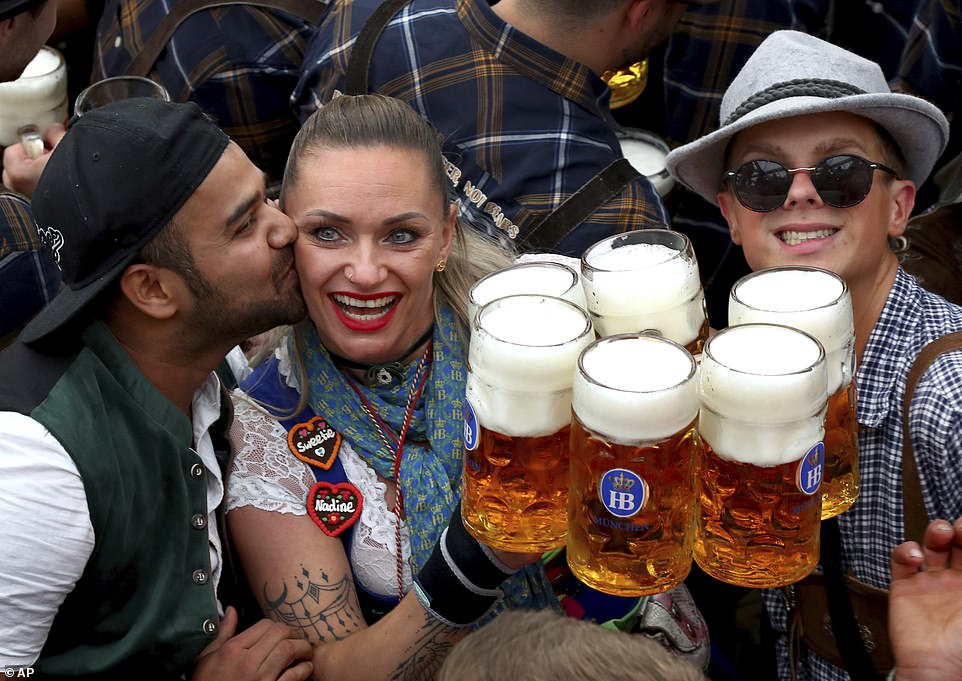 Nadine, a kellnerin (waitress) brings the beer for a group of men and receives a loving kiss for carrying the heavy load to the boys

Revelers – many women in colorful dirndl dresses and men in traditional Bavarian lederhosen – started lining up in front of the gates before dawn to get inside.

Felix Stenglein from nearby Eichenau said: ‘I took the first commuter train early this morning.’

Shortly after 9 a.m., the festivals’s organizers announced via loudspeakers that the party could begin. 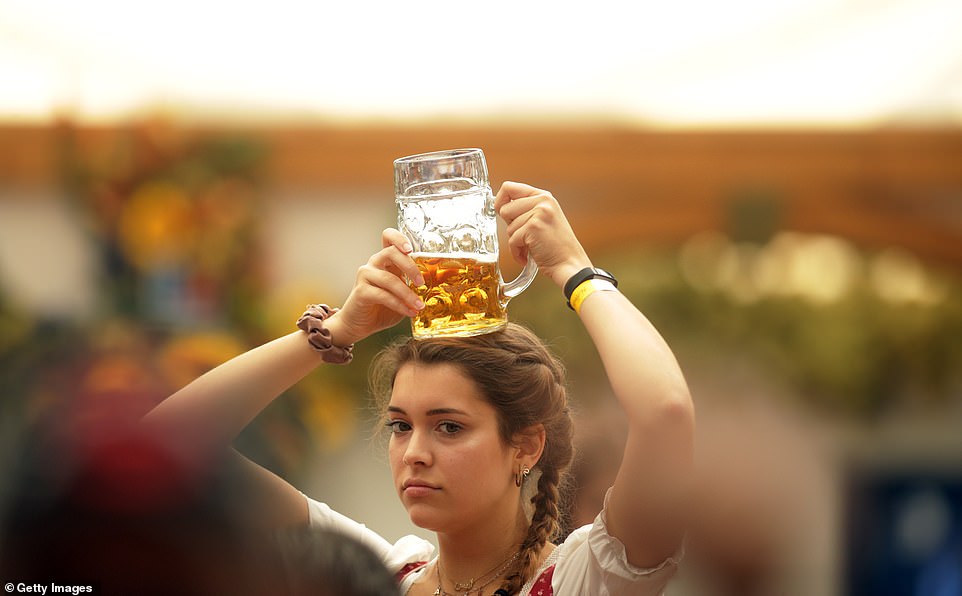 Get your own! A young girl pouts as she balances a half full mug of beer on top of her head not willing to place it down for fear of losing it in the crowd 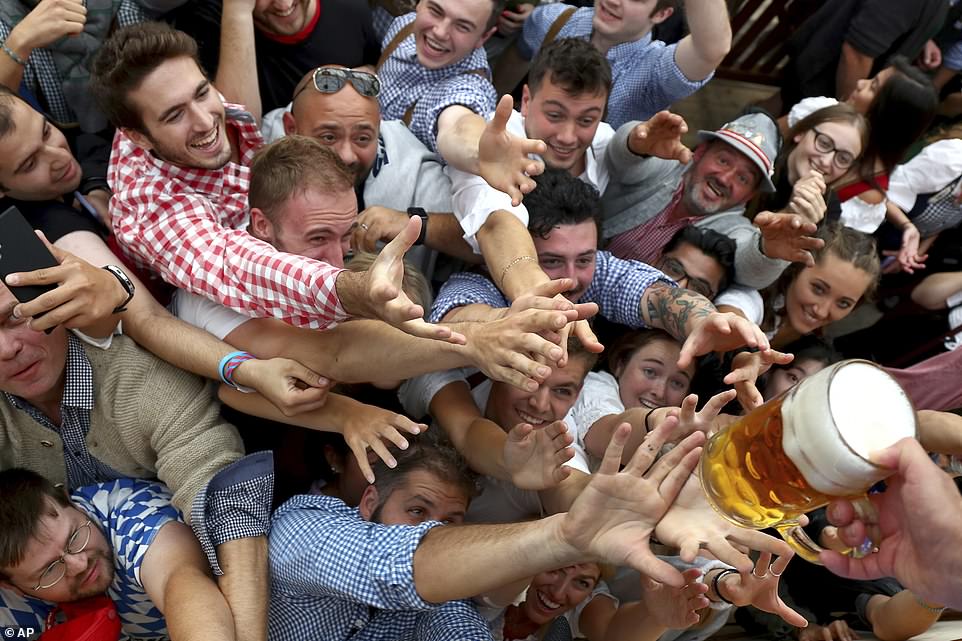 Just a litre bit further: The traditional beer mugs used in the festival are able to hold a litre of beer, equivalent to two full pints

The announcement came in German, English and Bavarian – a German dialect so thick and heavily accented with local vernacular that even many native German speakers from other parts of the country have trouble understanding it.

As the gates opened, many guests ran to the beer tents to make sure they’d catch one of the coveted spots on the long, wooden benches inside. 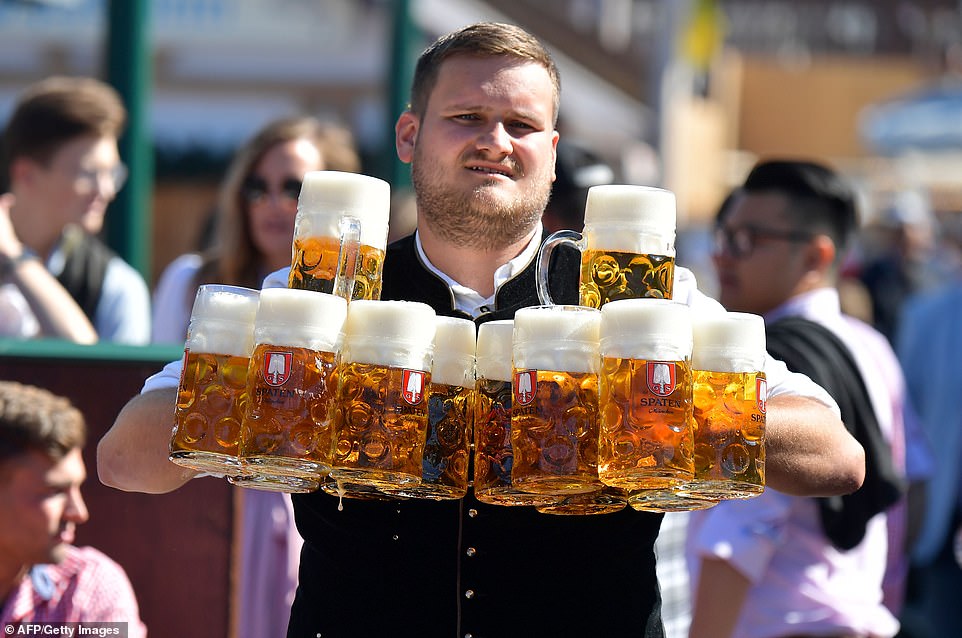 More than a baker’s dozen: A waiter manages to hoist 14 full mugs of beer barely spilling a drop as he transports it across to some thirsty customers 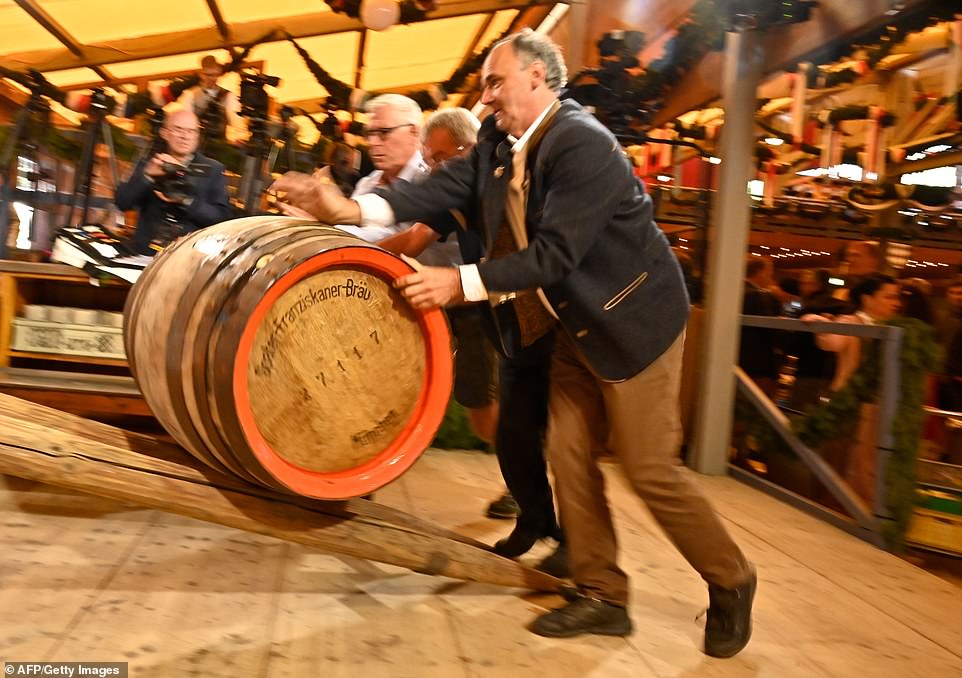 As is part of the great tradition, the first barrel of beer must be tapped and the first glass handed over by the Mayor to the governor of Bavaria 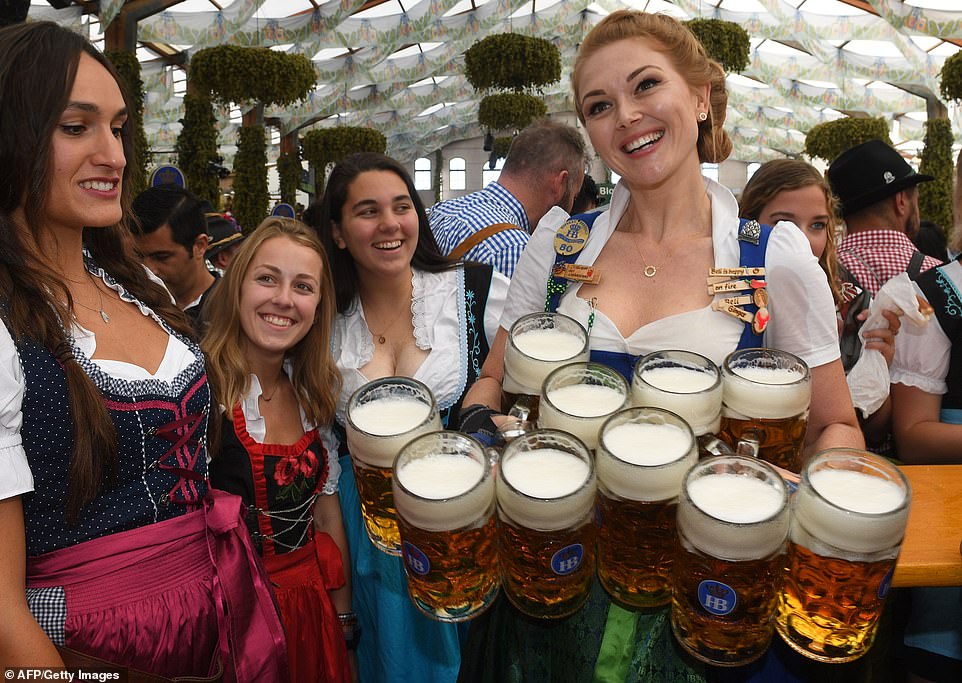 All smiles: Despite an increase in price for the precious liquid, nothing could dampen the spirits of those in attendance

Around 6 million beer lovers from around the world are expected at the festival in Munich before the Oktoberfest ends on Oct. 6.

Some 600 police officers and hundreds of security guards are tasked with keeping order around the many, often intoxicated visitors. Around 50 doctors are on call for those with health problems and there’s a special security area where woman can find protection from harassment.

E-scooters, which were legalized in Germany earlier this year, are banned inside and around the Oktoberfest grounds and plenty of traffic controls were established outside to prevent drunken driving after the party’s over. 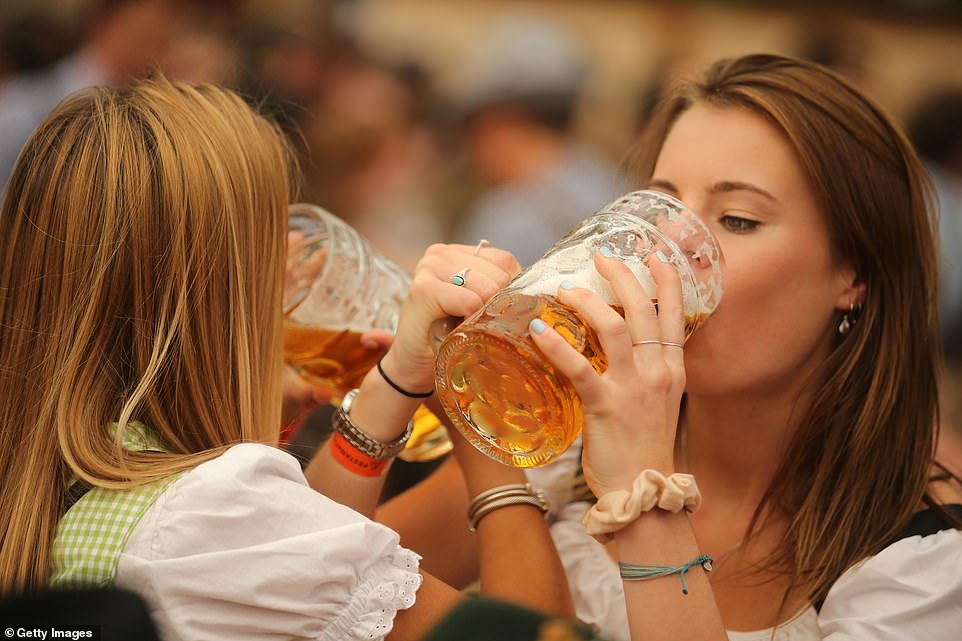 Two girls link arms as they chug through the first pint of beer contained in their massive beer mugs, thirsty for another round 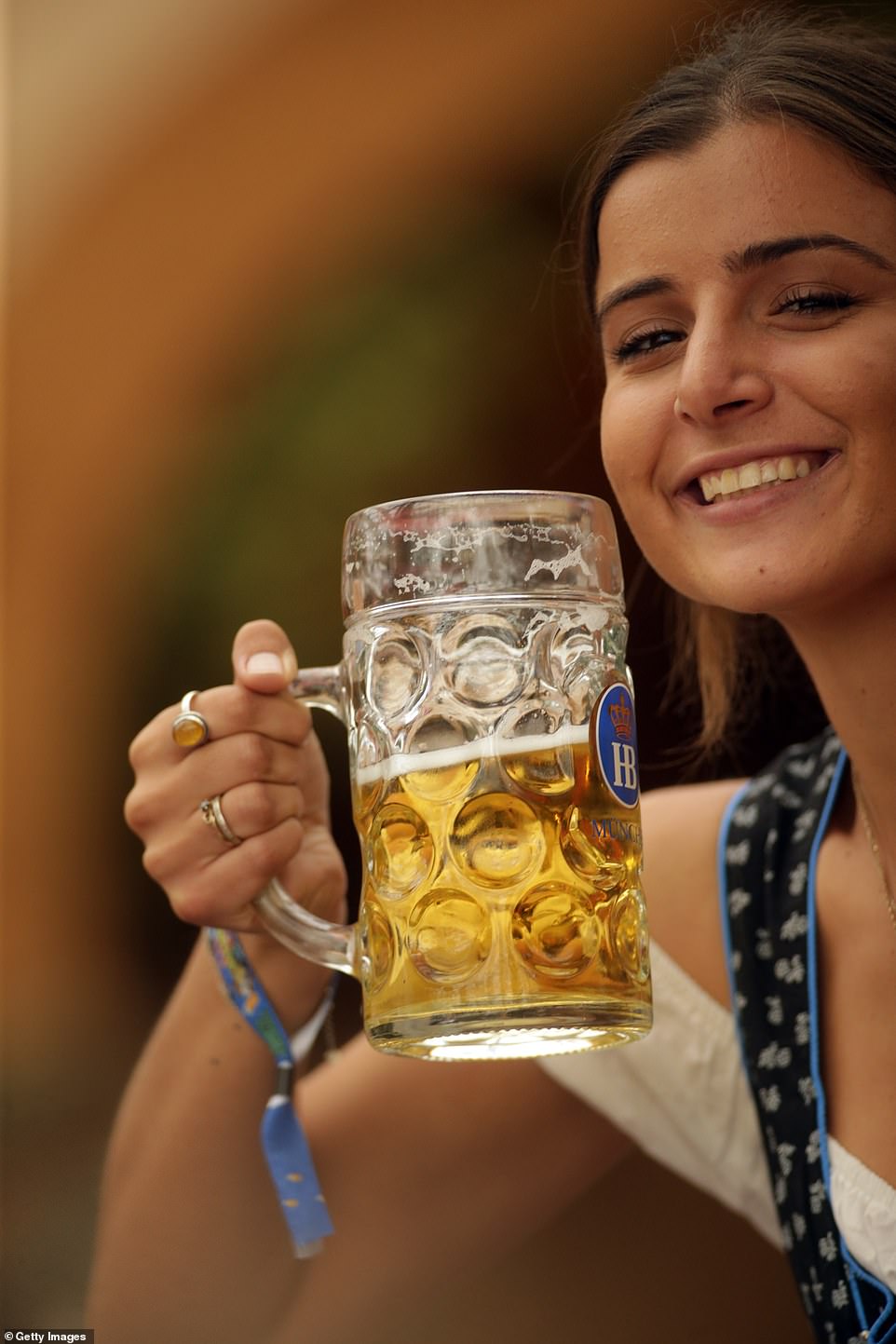 More of a work-out than you’d think! Hoisting several Masskrugs (Beer mugs) throughout the day works the arm muscles, as a young girls bicep tenses hard as she poses for this photo 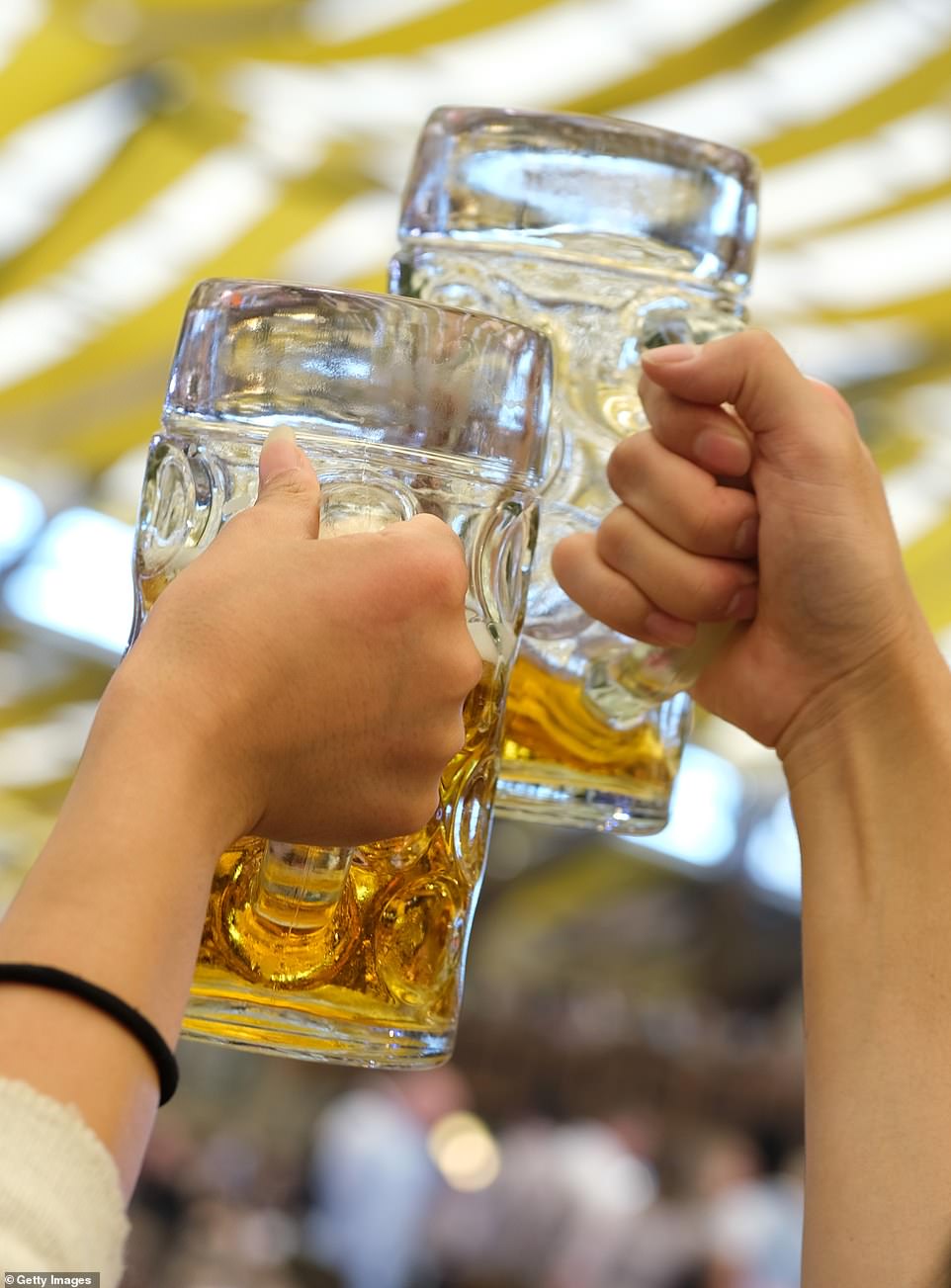 Prost!: Many glasses will have been brought together in celebration of this longtime annual tradition filled with warm wishes and socialising