Giant seven foot SLOTHS roamed the earth 11,000 years ago and humans HUNTED them

Today you might not bat an eye at the humble sloth – but thousands of years ago, these slow-moving herbivores were a force to be reckoned with.

Scientists have uncovered evidence of a deadly face-off between ancient humans and a giant sloth that loomed at nearly seven feet (2 meters) tall when standing on its hind legs.

And, the enormous animal was equipped with a set of sharp claws on both of its forelegs.

Giant sloths lived until around 11,000 years ago, and it’s widely believed that over-hunting by humans eventually led to their extinction.

Now, fossilized footprints in the salt flats of White Sands National Monument, in the southwestern U.S. state of New Mexico, have revealed how humans confronted these massive beasts.

Scientists have uncovered evidence of ancient humans engaged in a deadly face-off with a giant sloth, showing for the first time how our ancestors might have tackled such a formidable prey. An artist’s impression is pictured

The footprints show humans followed the exact footsteps of a giant sloth and then attacked it, possibly hurling spears.

‘The story that we can read from the tracks is that the humans were stalking; following in the footsteps, precisely in the footsteps of the sloth,’ said Matthew Bennett, one of a team of scientists behind the discovery.

‘While it was being distracted and turning, somebody else would come across and try and deliver the killer blow,’ said Bennett, a professor of environmental and geographical sciences at Bournemouth University in southern England.

‘It’s an interesting story and it’s all written in the footprints.’ 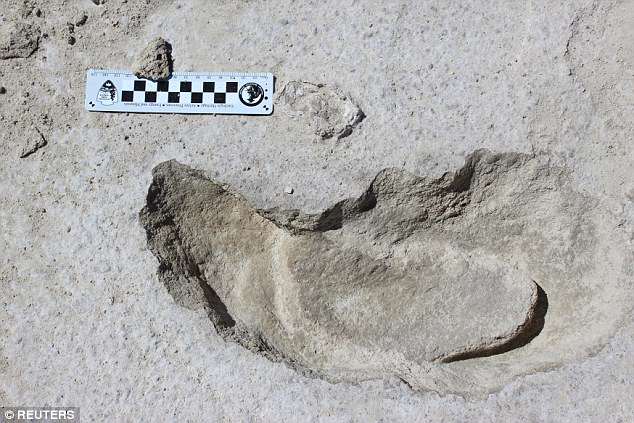 Fossilized footprints in the salt flats of White Sands National Monument in New Mexico, reveal humans walking in the exact footsteps of a giant sloth and then confronting it, possibly hurling spears. A human footprint inside a sloth track is shown above

At the White Sands National Monument, researchers identified what are known as ‘flailing circles’ that show the rise of the sloth on its hind legs and the swing of its fore legs, likely in a defensive motion. The composite plaster cast above shows a range of footprints at the site

At the White Sands National Monument, researchers identified what are known as ‘flailing circles’ that show the rise of the sloth on its hind legs and the swing of its fore legs, likely in a defensive motion.

In addition to tracks of humans stalking the sloth, there are more human tracks further away.

From this, scientists infer that the humans worked as a group, with a separate team distracting and misdirecting the sloth to outwit it.

The flailing circles are always associated with the presence of human tracks.

Where there are no human footprints, the sloths walk in straight lines, but where human tracks are present the sloth trackways show evasion, with sudden changes in direction. 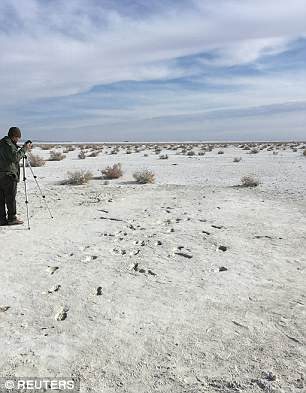 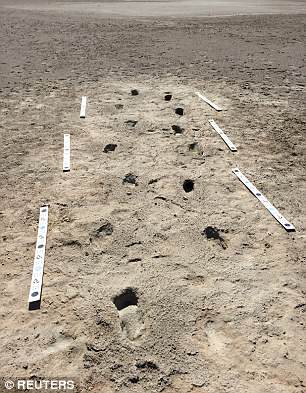 In addition to tracks of humans stalking the sloth, there are more human tracks further away. Shown right, two human footprint trackways can be seen at White Sands National Monument in New Mexico.

WHAT WAS THE GIANT ‘HARLAN’S GROUND SLOTH’? 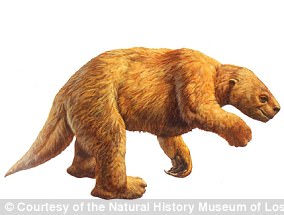 The giant mammal roamed the Los Angeles basin 11,000 years ago

The giants were bulky, with short necks, powerful chests, and massive jaws.

They had three claws per hand, which they could use for digging, grabbing, or defending themselves.

Under their coat of coarse, brown hair, they had small, nickel-sized, bony plates embedded in their skin as protective armor, similar to armadillos today.

Ground sloths originated in South America, before the continent was connected to North America by way of Panama.

A herbivore that fed on grasses, shrubs, and flowering plants, it used its stout snout and keen nose to sniff for food.

It lived in open grassland habitats and fed mostly on grass.

Thanks to new 3D modelling techniques, the fossilized footprints have been preserved using a system developed by Bennett.

Using a standard digital camera to take images from 22 different angles, his computer algorithm builds up an ultra-precise 3D rendering of the footprint.

‘What this evidence does is for the first time shows us how they might have tackled one of these big beasts and the fact that they were almost certainly doing it routinely is important,’ Bennett told Reuters at his university.

‘Getting two sets of fossil footprints that interact, that show you the behavioural ecology, is very, very rare,’ he said.