A giant sperm whale has been spotted in the Thames Estuary amid fears it could get trapped on mudflats at low tide.

The huge mammal – which is normally found in deep waters – was first spotted off the coast in Whitstable, Kent at around 12pm.

But later this afternoon it was seen in The Swale, a stretch of water between the Isle of Sheppey and the Kent mainland.

Now experts are concerned it could get trapped at low tide on mudflats.

The whale – reportedly thought to be about 50ft long – was first seen swimming and ‘spraying water in the air’ near Whitstable Harbour.

The huge mammal – which is normally found in deep waters – was first spotted off the coast in Whitstable, Kent at around 12pm

It was reported to the HM Maritime and Coastguard by staff at The Bubble Cafe, on Whitstable seafront.

Assistant manager Charlotte Bambridge told Kent Online: ‘We look right out to sea, and he or she was quite close – sort of stuck in one position for quite a while.

‘Then he moved slowly towards the harbour for about an hour, and he was spraying water in the air.

‘Then he stopped right where the harbour looks out, about 200m in front, and stayed there for about 15 to 20 minutes.

‘We were worried he might be stuck so we called the Coastguard, but then the tide came in and he drifted off towards the Isle of Sheppey.’ 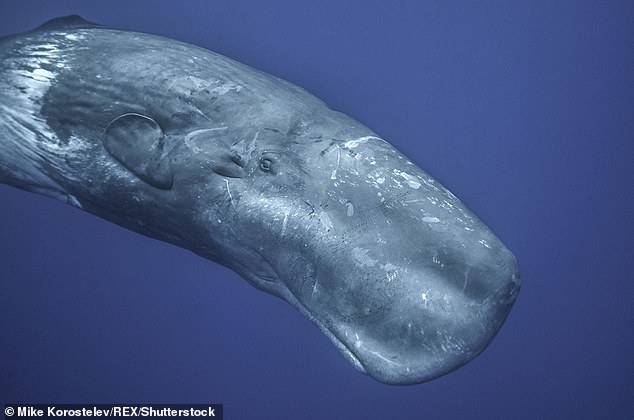 Volunteers from the charity British Divers Marine Life Rescue (BDMLR) have been dispatched to The Swale to closely monitor the sperm whale from a distance.

A spokesman said: ‘We think it is a sperm whale which are deep sea creatures. It is very large. We should not be seeing them on our coastline and when we do it normally means they are unwell or not eaten which means it could be malnourished.

‘There are lots of mudflats on The Swale. The tide is high at the moment but when the tide goes out we are concerned it could get trapped.

‘We have people looking out for it.’

Sperm whales are easily recognised by their massive heads and prominent rounded foreheads, according to National Geographic.

They have the largest brain of any creature known to have lived on Earth. 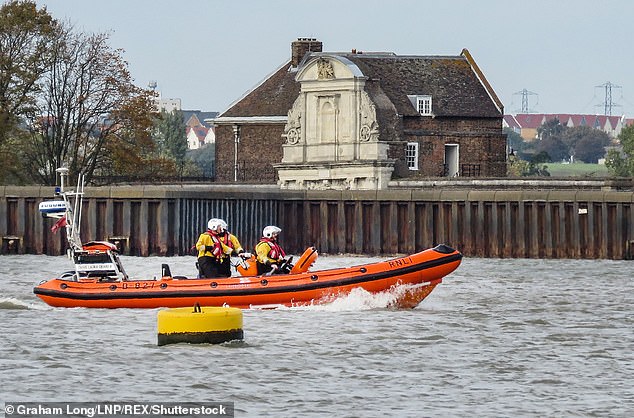 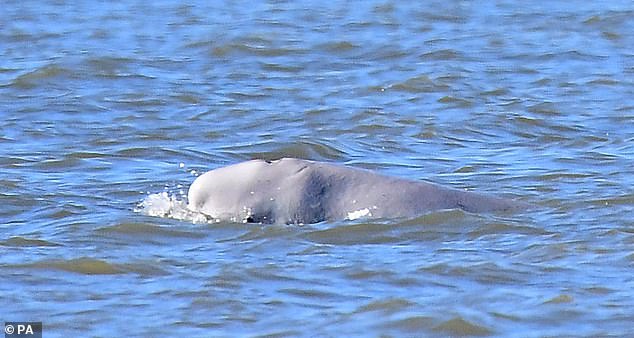 In September 2018 Benny the beluga whale (pictured) was spotted near Gravesend, Kent and stayed resident in the waters for months before disappearing

The sperm whale is the latest in a number of large sea creatures which have made it into the Thames Estuary in the last 18 months.

In September 2018 Benny the beluga whale was spotted near Gravesend, Kent and stayed resident in the waters for months before disappearing.

In October last year Hessy the Humpback made headlines across the World after swimming up the River Thames as far Gravesend in Kent.

The 27ft long juvenile female was seen feeding off Gravesend but died within days. She was found to have a large head wound caused by a ship strike.

Then days later the 32ft carcass of the female juvenile rare sei whale was spotted floating lifelessly near Gravesend.