Australian Rules football was dead on its knees in Sydney during the early 1990s – a ‘girl’s game’ trying to make its mark in staunch rugby league territory.

In those days you were hard-pressed finding a suburban oval with four posts at each end anywhere from Bondi to Blacktown, while kids scorned the idea of kicking a Sherrin around.

I was a child at the time, a die-hard Swans supporter. But even then I was very aware the club I loved – and the AFL in general – were the sporting laughing stocks of Sydney.

In fairness, the crowds the Swans drew to the Sydney Cricket Ground in those years were embarrassing.

My father and I would scoff at the official attendances displayed on the big screen above the old hill – 4,000 at worst, 10,000 at best – when we could see not many more than a few hundred scattered across the stands.

On the odd occasion the footy was launched from the goal square into the Noble Stand – where we sat for 14-straight seasons – I would often have to jump across row upon row of empty seats to hurl it to the back to the field from the deserted top tier.

That’s how empty it was. They needed an eight-year-old kid to act as ball boy in a vast, desolate stand during a match at the game’s highest level. 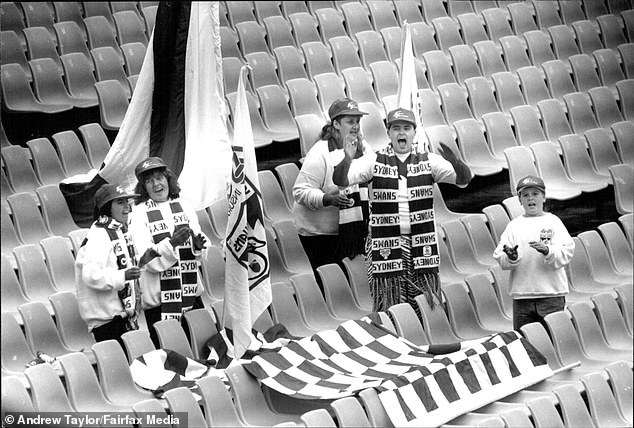 Max Margan and his father would scoff at the official attendances displayed on the big screen above the old hill at the SCG – 4,000 at worst, 10,000 at best – when they could see not many more than a few hundred scattered across the stands. Pictured are Swans fans in 1993 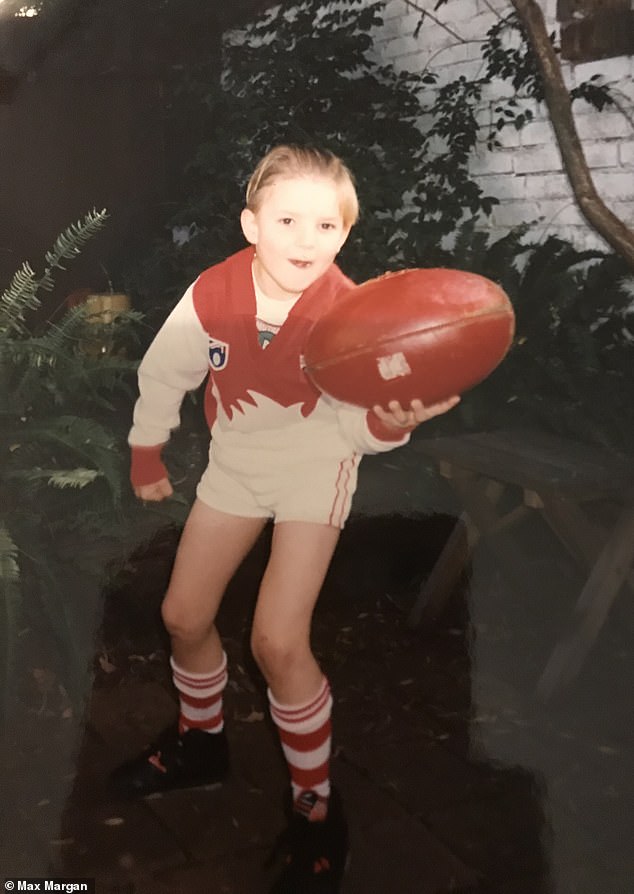 ‘Follow a real sport,’ Max Margan’s league-obsessed primary school mates told him. ‘Gay FL’s embarrassing, it’s a game for fairies.’ Margan has stayed true to the Swans through the years 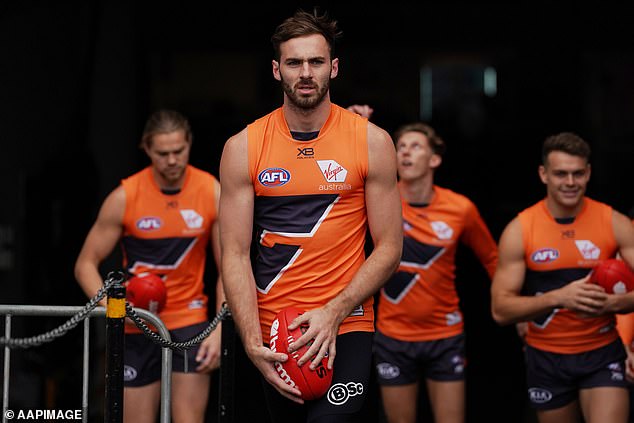 The Giants have gone from getting flogged every week at an empty home stadium to on Saturday playing in their first Grand Final after just seven years in the AFL, writes Margan

In 1993 I attended a footy clinic at Kmart and was the only kid there who had any idea who the Swans players running it were.

The AFL’s marketing campaign in Sydney at the time, which boasted ‘Australian Rules, Rules Australia’ had clearly failed to capture the city’s attention.

The fact the Swans lost 26 games in a row during the 1992 and 1993 seasons probably didn’t help. The club took out three consecutive wooden spoons from 1992.

Former Swans general manager Ron Joseph told The Age what those times were like a few years ago.

‘They’d be eight goals down at half-time and people would stand up and clap them off the ground,’ Joseph said.

But how things change. Master coach Ron Barassi came to the club in 1993 and brought in champion players Tony Lockett and Paul Roos in 1995. 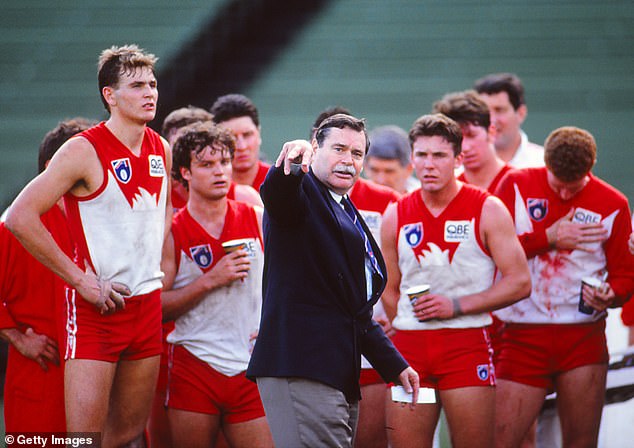 The Swans were a basket case through the early 1990s. The appointment of football legend Ron Barassi (pictured) as coach in 1993 helped turn around the club’s on-field performance 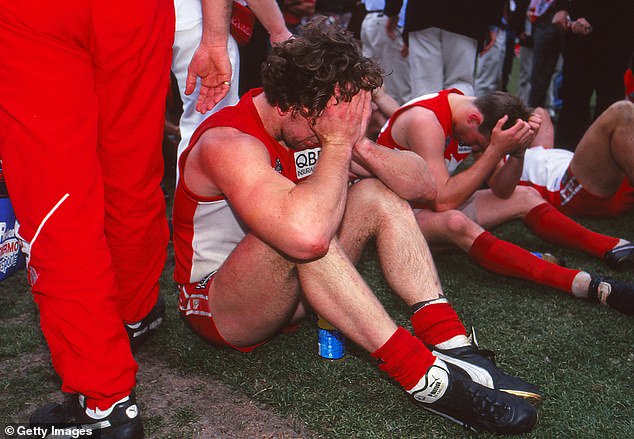 Swans players Dale Lewis and Daniel MacPherson are dejected after losing the 1996 Grand Final against the North Melbourne Kangaroos at the MCG. Better times were to come 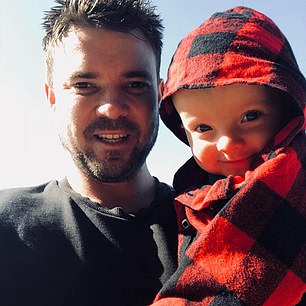 Margan today with his son Harry, the next generation of Sydney Swans supporter

With a talented roster came the wins and with more wins came growing crowds at the SCG. Sydneysiders have always loved a winner.

AFL crowds at the SCG have blown those of its cross-code rivals out of the water for years – and when the Swans make the finals, they hold their own in the television ratings as well.

Now the time of the GWS Giants has come.

The Giants have gone from getting flogged every week at an empty home stadium to on Saturday playing in their first Grand Final after just seven years in the AFL.

The club’s extraordinary success has left pompous footy traditionalists in Melbourne scathing, much like they were when the Swans became a genuine powerhouse. 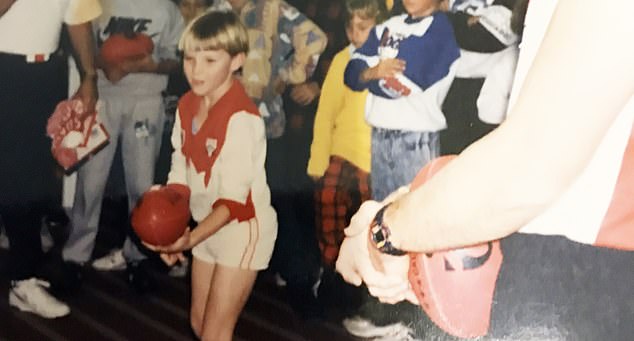 Max Margan attends a footy clinic at a Kmart in 1993. He doubts any of the other rugby league-loving kids even knew who were the Swans were. To the right is star forward Richard Osborne 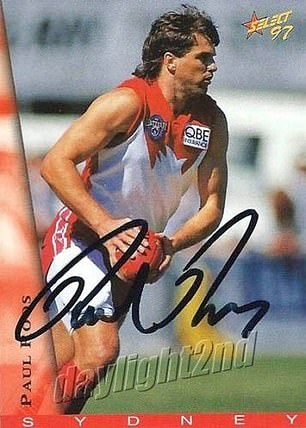 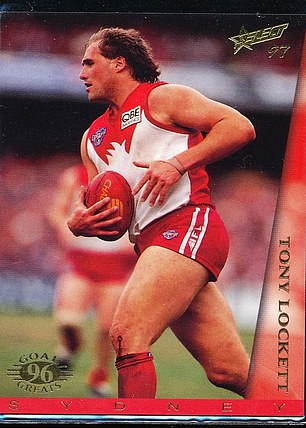 Master coach Ron Barassi joined the Swans in 1993 and two years later had Paul Roos (left) and Tony Lockett (right) in the red and white. Roos and Locket became legends of the Sydney club

The critics claim the Giants’ draft pick and salary cap concessions – both of which are realities – undermine the integrity and fairness of the game.

They perceive the club as an AFL corporate cash-grab without real fans or history.

‘Some fans view them as a plastic club, manufactured by the AFL for commercial reasons with few fans, no history and empty grandstands,’ sports lecturer Sam Duncan wrote recently.

While that may be largely true, they’re missing the point.

The AFL quite rightly wants, and has almost achieved, a truly national competition. That is one of the game’s great selling points.

So two teams in the country’s biggest and most populous city is more than reasonable (though why there aren’t teams in the Northern Territory and Tasmania is beyond me). 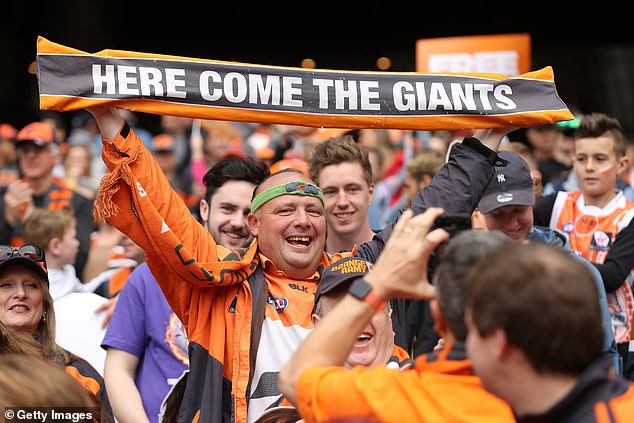 ‘I too loathe the Giants,’ writes Max Margan. ‘Not because I don’t want them in the competition, but because I want a team whose rivalry with the Swans could one day match that of Collingwood and Carlton. Giants fans are pictured at the MCG for a training session on Friday

The vast majority of footy fans on Saturday will be hoping the Tigers flog the ‘most hated team in the comp’.

And here’s the kicker: I’m one of them.

I too loathe the Giants, not because I don’t want them in the competition, but because I want a team whose genuine rivalry with the Swans could one day match that of Carlton and Collingwood.

And I want the Sydney sports lovers who haven’t yet come around to learn that AFL isn’t ‘a game for fairies’.

A Giants flag, when it comes, will go a long way towards doing that – earning the game a legion of new young fans and plenty of older bandwagon supporters.

But it doesn’t have to happen just yet.

This Sydneysider will be barracking for Richmond on Saturday. And any team playing the Giants – except West Coast – for years to come. 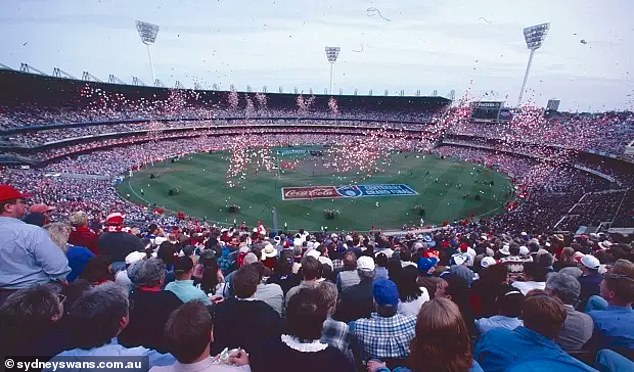 Max Margan will be barracking for Richmond on Saturday. And any team playing the Giants – except West Coast next year. Pictured is the 1996 Grand Final, which Sydney lost to North