Gina Rinehart sells Noosa land on Sunshine Beach for $6million mark up after buying for $11.2million

Mining mogul Gina Rinehart is hoping to strike a different kind of payday as she lists one of her many blocks of land at an audacious $6million mark-up.

But less than a year after buying the land, it is now back on the market for $17.2million.

The site fronts Sunshine Beach, a favourite of holidaymakers in the Noosa region, north of Brisbane.

The Park Crescent site is being sold by upscale Noosa real estate agent Paul Offermann and the listing comes with its own slickly produced video.

‘Covet one of the last remaining absolute beach sites in Sunshine Beach,’ agent Rebekah Offermann says in the video.

‘After relishing sunrise from your front trellis trot down to the Sunshine Beach shops for coffee and then while away your days on the glistening white sand out the front.’

The site is being marketed using plans for a four-level ‘avantgarde house’ designed by local architect Paul Clout, who specialises in ‘resort’ style homes. 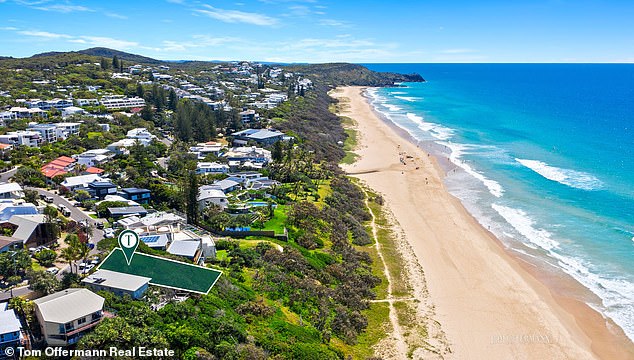 The 531sqm site is located on Noosa’s Sunshine Beach is being sold for $17.2m after being bought for $11.2million last February

The plans were commissioned by the land’s prior owner, construction tycoon Andrew Vandersteen, but are at the concept stage only and do not have council approval or are included in the sale price.

Despite that, the site’s listing encourages potential buyers to picture the home.

‘Other outstanding features include a lift, and multiple living areas indoors and out.’ 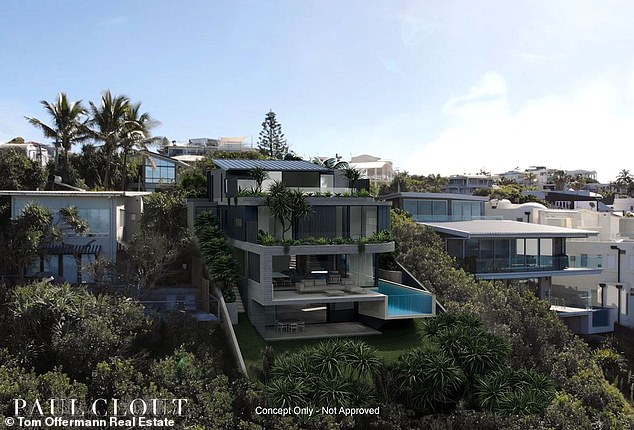 The site was acquired by Mr Vandersteen for just over $7million in late 2020 during a pandemic-led boom in ‘lifestyle’ real estate.

Although there has been a cooling period of late, largely as the result of interest rate rises, Noosa has been the epicentre of the real estate scramble for pricey properties.

The region had six out of the 10 highest priced sales of ‘recreational’ real estate in 2022, with highest price tag being the eye-watering $28.5m paid for 636sqm mansion on a 636sqm oceanfront block also on Sunshine Beach.

Ms Rinehart and her associates are understood to have snapped up nearly $75 million worth of sites in the area, according to The Australian. 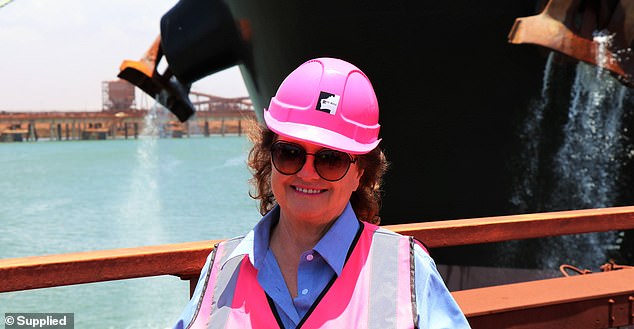 Spikes in commodity prices have seen Ms Rinehart, who is the executive chairman of Hancock Prospecting, sail into 2023 firmly entrenched as Australia’s wealthiest person, according to the most recent Australian Financial Review rich list.

The previous year saw an estimated $2 billion added to Ms Rinehart’s fortune to see her coffers bulging out to $35.9 billion.

Mr Rinehart’s private company has made almost $20 billion in profits during the past four years alone.