Efforts to map the genome of giraffes has confirmed that there are four distinct species, and they are as different to one another as brown bears and polar bears.

Visually, they are hardly distinguishable, according to LOEWE Centre for Translational Biodiversity Genomics scientists, who carried out the genetic analyses.

According to their comprehensive genome analyses, the four giraffe lineages have been evolving separately for thousands of years.

Efforts to map the genome of giraffes has confirmed that there are four distinct species, and they are as different to one another as brown bears are to polar bears 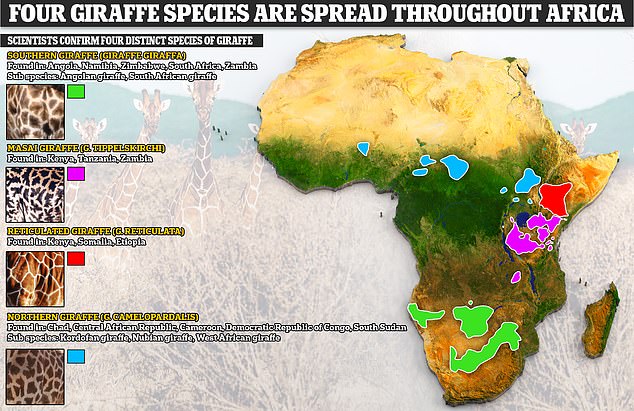 According to their comprehensive genome analyses, the four giraffe lineages have been evolving separately for thousands of years

Relationships within the genus of giraffes have been debated before, and for a long time it was assumed there was just a single species with multiple subspecies.

The same team behind this new genetic research, first proposed the four distinct species of giraffe in 2016, saying the new work builds on and confirms that idea.

‘New mammal species are only rarely discovered and described,’ says Dr Janke, adding that genomics opens up new possibilities to broaden our understanding.

‘Genomics, that is studying all genetic information of a living being, opens up new possibilities and can broaden our perspective on species and their evolution – as now happened in the case of giraffes,’  he said.

The 2016 initial genetic studies from Janke’s laboratory looked at the DNA of 190 giraffes from across their range in Africa.

Now, the genome analyses support the model of four species. The analysis of about 200,000 positions on DNA from a total of 50 giraffes confirm the differences.

Within the four main species, namely northern giraffe, southern giraffe, reticulated giraffe and Masai giraffe, there are a total of seven subspecies.

The data also show that the four giraffe lineages began to evolve separately of each other between 230,000 and 370,000 years ago. 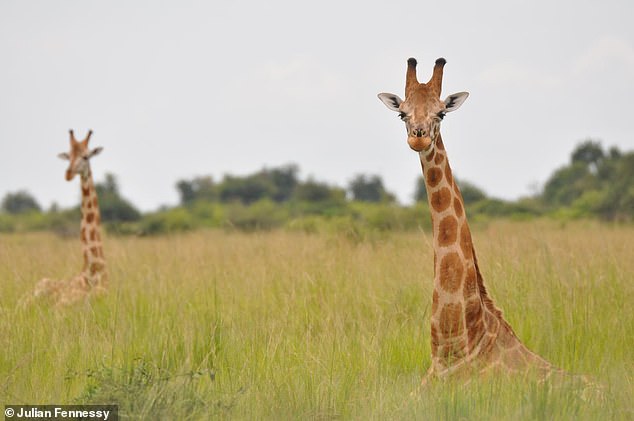 This is a Nubian giraffe in Murchison Falls NP, Uganda. Visually, they are hardly distinguishable, according to LOEWE Centre for Translational Biodiversity Genomics scientists, who carried out the genetic analyses 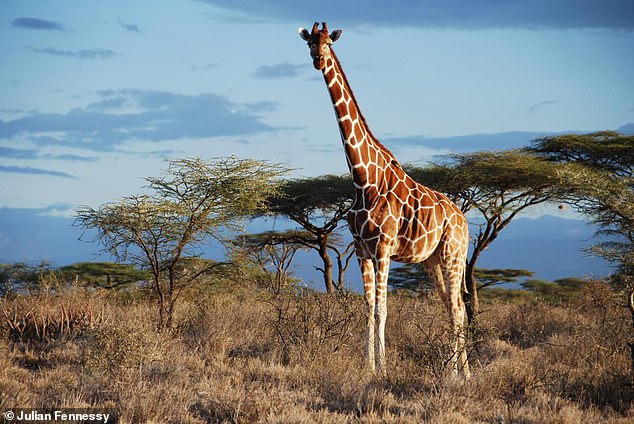 The results of the genome study found the different species were not mating in the wild, with ‘little or no gene flow and admixture,’ researchers explained.

In captivity, however, conservationists have found it is possible to get the different species to mate under certain circumstances.

‘The results of the genome analysis have great significance for giraffe conservation,’ says Dr Julian Fennessy, GCF director and co-author of the study.

The populations have declined sharply in the past century to around 117,000 wild giraffes throughout the African continent. 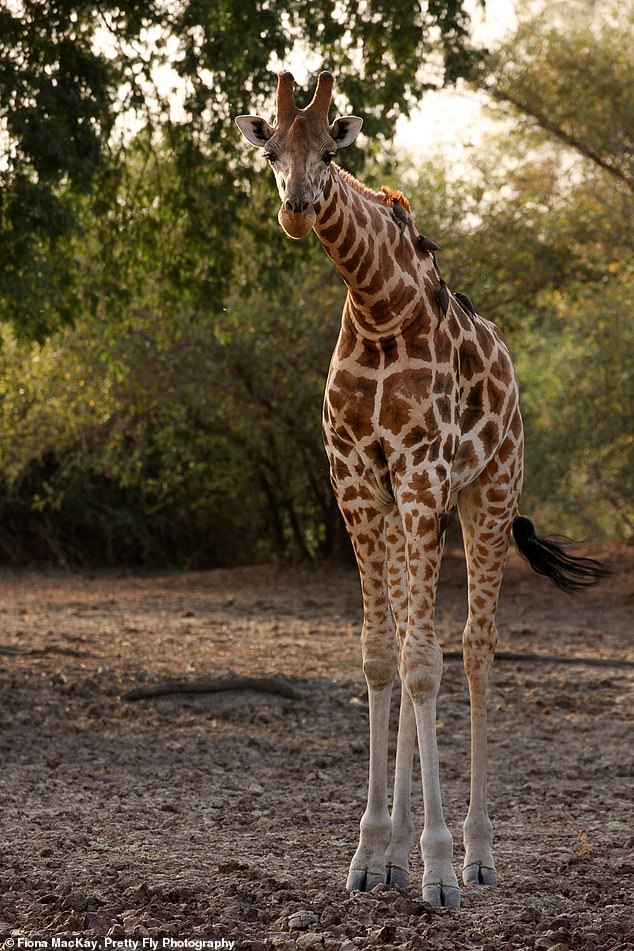 The Kordofan giraffe (pictured) is one of seven subspecies within giraffes. Researchers have now sequenced its genome for the first time

MILLIONS OF YEARS OF EVOLUTION GAVE THE GIRAFFE ITS NECK

Scientists who mapped the complete giraffe genome found just a few well-known genes are responsible for the animal’s unique features.

The researchers identified 70 genes that show signs of adaptation in the giraffe compared to other mammals.

The results showed the animal’s long neck is sustained by a ‘turbocharged’ heart, that can pump blood six feet (2 metres) to the head.

This formed thanks to dozens of mutations that allowed it to grow gradually over millions of years.

It indicates the giraffe’s neck evolved over 15 to 20 millions years.

With four distinct species it makes the situation worse, as each individual species is under even greater threat from rapidly declining numbers and a lack of intermixing.

‘We estimate that there are less than 6,000 northern giraffes remaining in the wild,’ explained Fennessy, adding that ‘as a species, they are one of the most threatened large mammals in the world.’

Giraffes reach up to 19ft in height, are herbivores and occur in the savannahs of Sub-Saharan Africa from Niger through Kenya and Namibia to South Africa.

They are the world’s largest land-dwelling mammals and their livelihoods are being decimated in many places by the growing demand for farmland.

The International Union for Conservation of Nature (IUCN) classifies giraffes as ‘endangered’ in their Red List of Threated Species.

The model of four species model has not been taken into account so far – a fact, that could change now that they have been confirmed as genetically distinct.

‘The data available is more informative than ever before,’ says Raphael Coimbra, study co-author, adding that the genome analyses are based on ‘significantly more genetic data than previous studies.’ 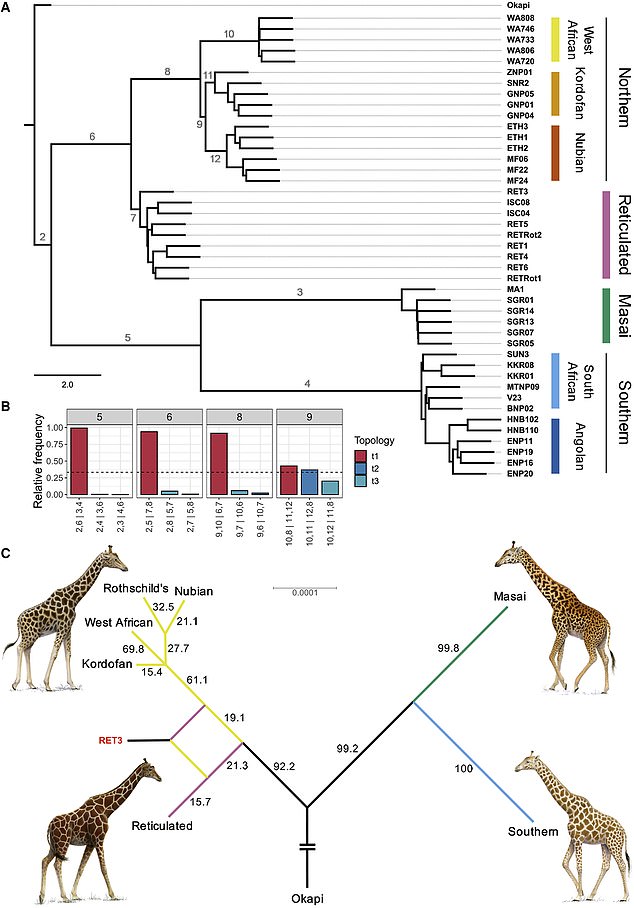 Relationships within the genus of giraffes have been debated before, and for a long time it was assumed there was just a single species with multiple subspecies

In their analyses the researchers compared genomes of giraffes from all previously considered species and subspecies coming from a total of 12 countries and zoos.

Thereby, genome of the Kordofan giraffe, a critically endangered subspecies of the northern giraffe, was completely sequenced for the first time.

‘In the case of giraffes, we can see that we do not yet sufficiently understand the genetic basis of biological diversity,’ says Janke.

‘The genomes contain invaluable information, for example about adaptations to climatic conditions or the evolution of species. We are only at the beginning. But one day we will fully understand the genome and its wealth of genetic information.’ 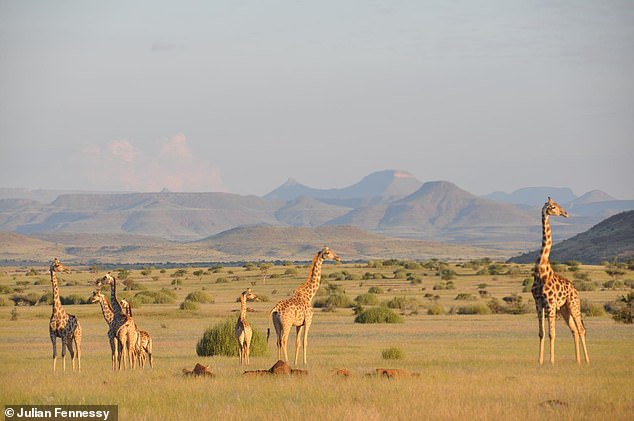 This image shows an Angolan giraffe herd in Damaraland, NW Namibia. According to their comprehensive genome analyses, the four giraffe lineages have been evolving separately for thousands of years 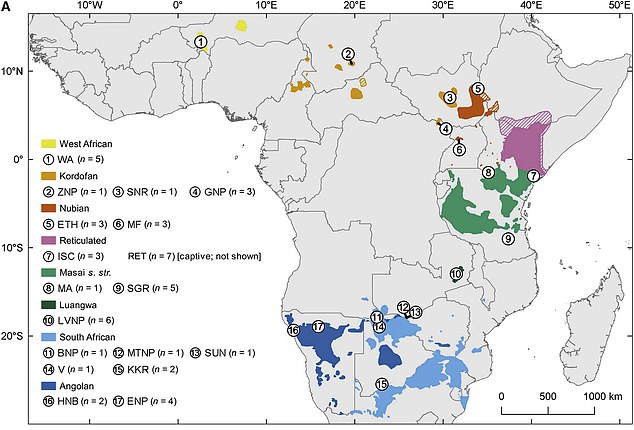 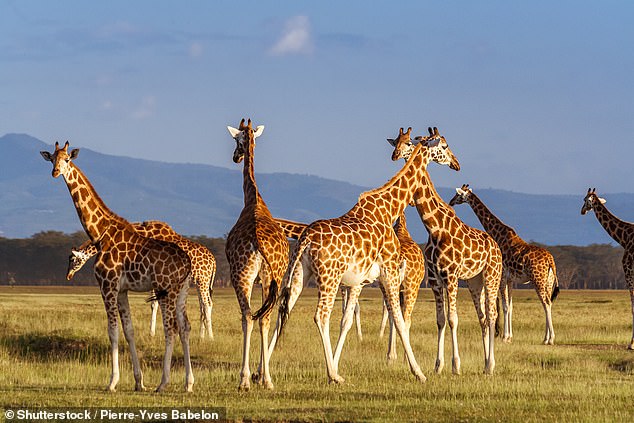 Nubian Giraffes (Giraffa camelopardalis) in Lake Nakuru National Park, Kenya. Giraffes reach up to 19ft in height, are herbivores and occur in the savannahs of Sub-Saharan Africa from Niger through Kenya and Namibia to South Africa

Janke and his colleagues are investigating and documenting the genetic basis of biological diversity in a range of species through an extensive genome collection.

Researchers have already sequenced more than 349 genomes of various species from worms to whales – 46 genomes of which are of particularly high quality.

The data is also available to other researchers to use for concerns of society, such as nature conservation and species protection.

The findings have been published in the journal Current Biology.

WHAT IS A GENOME?

An organism’s genome is written in a chemical code called DNA.

The human genome is composed of more than three billion pairs of these building-block molecules and grouped into some 25,000 genes.

Currently, less than 0.2 per cent of the Earth’s species have been sequenced.

A group of 24 international scientists want to collect and store the genetic codes of all 1.5 million known plants, animals and fungi over the next decade.

The resulting library of life could be used by scientists to find out more about the evolution of species and how to improve our environment.

The £3.4 billion ($4.7bn) project is being described as the ‘most ambitious project in the history of modern biology’.