Girl, 10, passed out after having her hair curled triggered a seizure

A teacher has revealed how curling her 10-year-old sister’s hair caused the youngster to pass out.

Alicia Renee Phillips, 32, was helping her sister Gracie Brown get ready for Sunday school on the morning of July 7.

While Mrs Phillips, of Clinton, Tennessee, was styling Gracie’s hair, the youngster suddenly collapsed and had a seizure.

After thinking her sister was ‘dying’, the youngster opened her eyes a minute later.

The family rushed Gracie to hospital, where she was diagnosed with hair-grooming syncope. She did not require treatment and is doing well.

Tugging on the hair is thought to stimulate the body’s vasovagal nerve. This can cause a child’s blood pressure to drop and their heart rate to slow, which can lead to loss of consciousness. 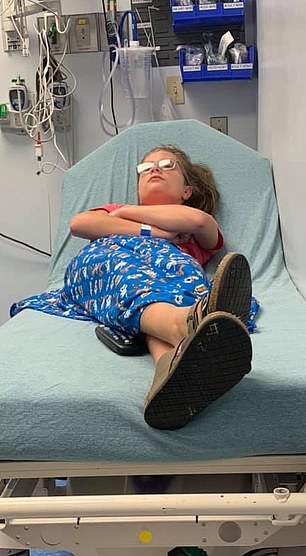 Gracie Brown (left) had a seizure when having her hair curled triggered the condition hair-grooming syncope. The 10-year-old was rushed to East Tennessee Children’s Hospital in Knoxville (seen right) on July 7 when she suddenly collapsed and became unresponsive 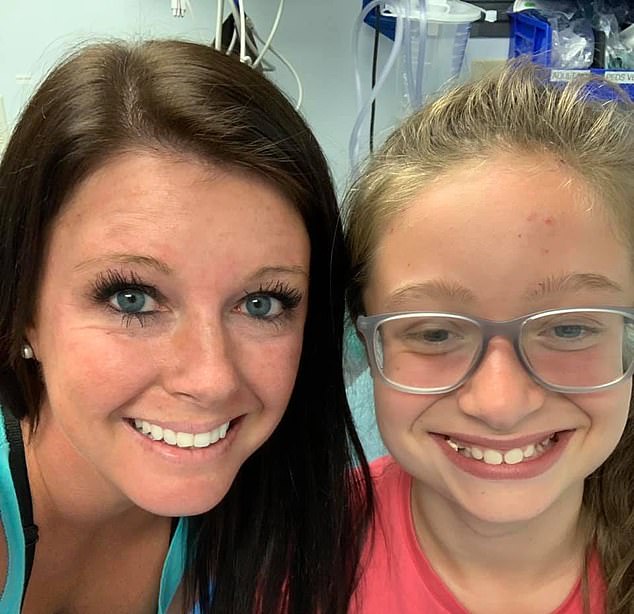 Gracie’s sister Alicia Renee Phillips (pictured together) was helping her get ready for Sunday school when the incident occurred. Mrs Phillips thought Gracie was going to vomit when she started gagging. Not long after, the youngster’s lips turned blue and her eyes went black

Gracie had slept over at Mrs Phillips’ house the night before the ordeal, with the pair deciding to have some ‘sister time’ before church.

Mrs Phillips, who is a maths teacher and basketball coach, said: ‘Most kids hate having their hair brushed or braided, but Gracie was excited to get dressed up.’

‘She’s a goofy kid so I thought she was joking about,’ Mrs Phillips said. ‘But then she did it again and started to make a gagging sound.’

The mother-of-three asked her sister if she was going to vomit and held her hair back as she leaned over the toilet.

Mrs Phillips phoned her and Gracie’s mother Lisa Brown, 55, to let her know what was happening.

Things then took a dramatic turn for the worse when Gracie’s lips turned blue and she collapsed.

‘Luckily I caught her as she fell, but her pupils had filled her eyes making them almost completely black and she was just staring into space,’ Mrs Phillips said.

‘She was unresponsive and not moving. It was the scariest thing I’ve ever seen.’

Mrs Phillips screamed for her husband Dale, 36, who rushed into the bathroom, where Gracie lay unconscious.

Dale set about trying to take the youngster’s pulse, while his wife tried to make her respond to her name.

‘I really thought she was dying, I have never been so terrified,’ Mrs Phillips said. 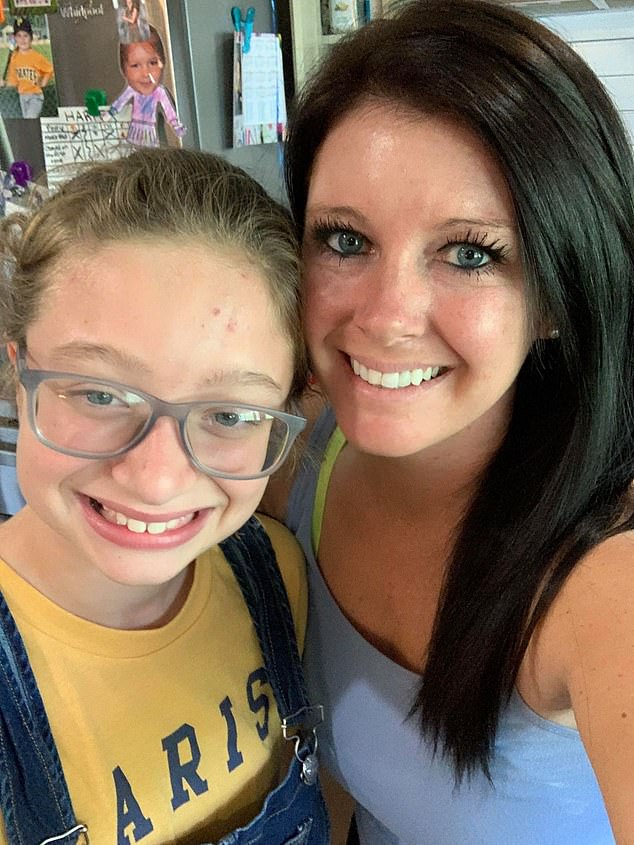 Mrs Phillips thought the ‘goofy kid’ was messing around until she started shaking uncontrollably. Thinking her sister was dying, she describes it as ‘the most terrifying moment’ 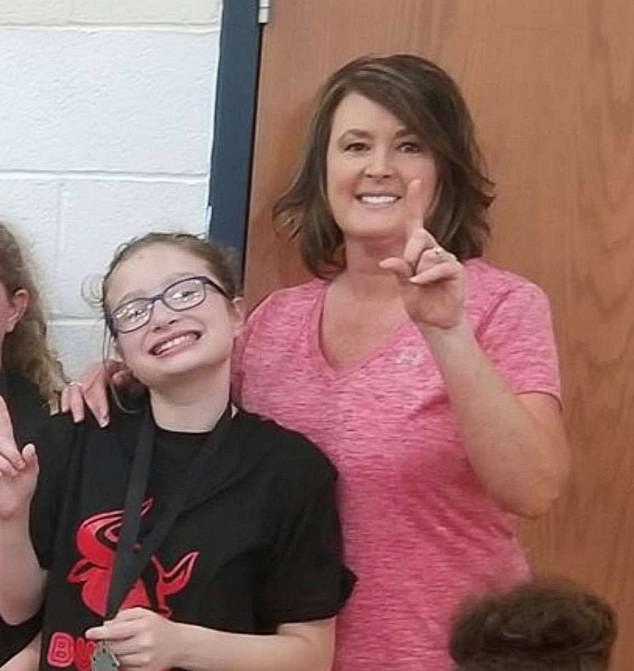 Mrs Phillips phoned her mother Lisa Brown (pictured with Gracie), who got in touch with the youngster’s paediatrician. The family were told to make their way to hospital immediately

Not long after she collapsed, Gracie came around, saying she was ‘feeling better’.

The youngster claimed she could hear her sister and stepbrother talking to her but was unable to respond.

Once there, doctors performed numerous tests – including blood pressure measurements, an ECG and a brain scan – which all came back clear.

A specialist later told the family Gracie had hair-grooming syncope, with him seeing just one-to-five cases a year.

‘I must have looked at him like he had four heads,’ Mrs Phillips said. ‘I’d never heard of anything like it before – but he assured us it was real.’

The medic advised Gracie ‘sit down and take a break’ if she ever feels nauseous or light headed while having her hair styled.

‘We’ve just got to be extra careful whenever she’s doing her hair,’ Mrs Phillips said.

‘But she still needs to brush it. She can’t walk around with a birds nest on her head!’

Mrs Phillips later took to Facebook to warn people of ‘one of the scariest moments of her life’.

In a post that has been shared 216,000 times, she wrote: ‘If a kid ever complains of their belly hurting or feeling light headed while they are getting their hair done, make sure they take a seat and keep a close eye on them!’

Mrs Phillips was comforted by the flood of responses she received.

‘I don’t feel so silly now, knowing that this has happened to other people,’ she said. 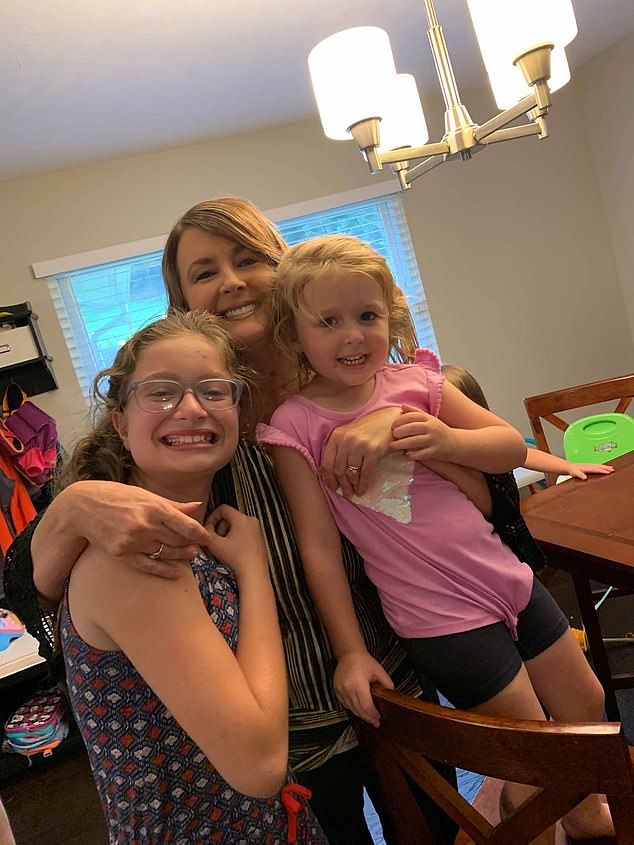 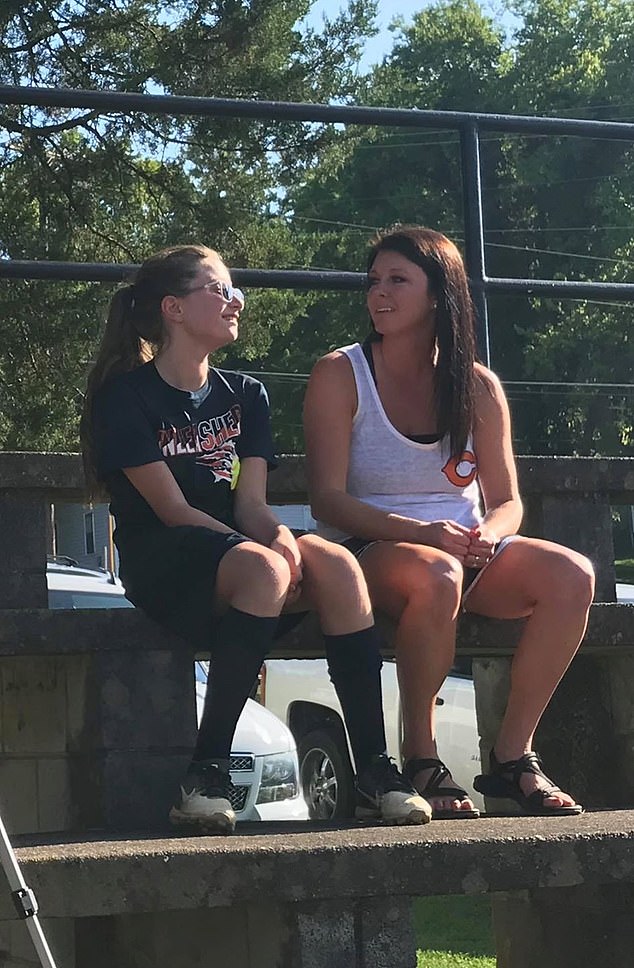 The maths teacher and basketball coach (pictured with Gracie) was told to be careful when brushing her sister’s hair in the future, and to ‘stop and take a break’ if she starts to feel dizzy

Hair-grooming syncope causes sufferers to endure epilepsy-like seizures when they have their hair styled.

Unlike with epilepsy, these seizures are unrelated to the firing of neurones in the brain.

Sonia Batra, a dermatologist in Santa Barbara in California, told ABC News: ‘It is thought to be due to a sudden drop in blood pressure, which temporarily decreases blood supply to the brain.

‘Hair-grooming syncope is a similar response to people who faint from having their blood drawn or at the sight of blood.’

Tugging on the hair is thought to stimulate the body’s vasovagal nerve, which causes a person’s blood pressure to drop and their heart rate to slow. This can lead to a loss of consciousness.

Dr Alison Tothy, an associate professor of paediatrics at the University of Chicago, told TODAY: ‘It is all so fascinating.

‘We think it is either from pain, pulling on the scalp or scalp stimulation, or fear and the body feels like it is going to pass out and they do.’

Dr Dan Fain, chief of paediatric in-patient neurology at Helen DeVos Children’s Hospital in Grand Rapids, Michigan, added: ‘For some reason, your sensory system sends off this funny signal and your body reacts.’

A study by the University of Nevada found girls are more sensitive to hair combing or brushing and boys to hair cutting.

Most sufferers grow out of the disorder by their mid teens.

Treatment is not usually required, however, patients should go to hospital for a check-up if they faint or have a seizure.

If someone feels dizzy while having their hair styled, they should lie down and elevate their legs.

Although it may be difficult, Dr Fain also advises sufferers try to stay calm, with worrying only making it more likely they will faint again.

‘It’s a vicious cycle,’ he said. ‘If it happens again and again, it’s a circuit.’

People who suffer frequently are advised to stay hydrated and eat before they style their hair.