A 12-year-old girl horrifically injured by a drink driver in the same crash that killed her mother today begged the Government to ban motorists from consuming any alcohol before getting behind the wheel.

Fraya Cunningham – who broke almost every bone in her body during the head-on smash caused by a serial offender – said there should be a zero tolerance approach to boozing before driving.

Now she has bravely released heart-breaking pictures of her two-month stay in hospital, where she spent 10 days in a coma, in a bid to show the public ‘what a drink driver has done to me’.

‘I want to show pictures of me now and before the crash, to show what drink drivers can do to people,’ she said.

‘I want the world to see what kind of damage drink drivers cause. No-one should drink and drive.’

Adam White – who was twice the legal limit – careered headfirst into the Cunninghams’ car while speeding past a truck.

White had six previous convictions for 17 offences – three of which were for drink driving – yet he still wasn’t banned from the roads.

Fraya’s mother Katy, 46, was killed as her car flipped over on impact – and Fraya and brother Zackeri, then eight, were admitted into intensive care.

Fraya beat the odds to survive after suffering heart failure and spending 10 days in a coma, but had to use a wheelchair for months and will be scarred for life. Zackeri broke his neck and spine.

Fraya now wants the world to see her injuries, and has begged Prime Minister Boris Johnson to introduce a zero alcohol limit for drivers.

England and Wales has one of the laxest drink drive limits in the world. 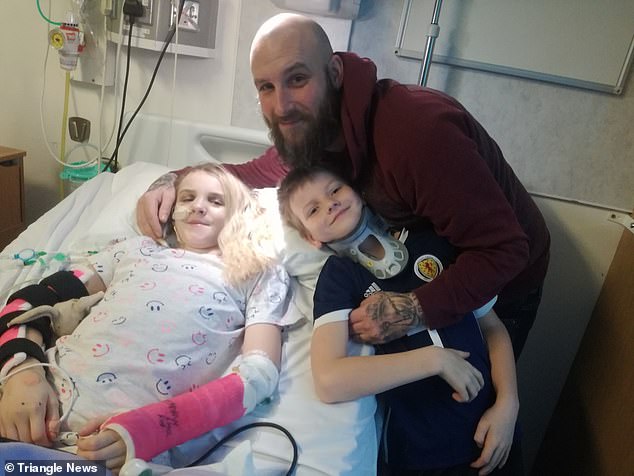 The crash killed her mother, Katy, 46, and injured her brother, Zackeri (pictured with their father, Kris)

Yet in 2017 – the latest figures available – deaths due to drunk driving hit an eight-year high.

Around 250 people were killed in accidents that year when at least one person was over the alcohol limit.

Just a month ago, road safety charity Brake urged the Government to introduce a zero tolerance alcohol limit for drivers.

Joshua Harris, director of campaigns, said: ‘Our current drink-drive limit gives a false impression that it is acceptable to mix alcohol and driving – which couldn’t be further from the truth.

‘Decisive action is needed to end this blight on our roads and prevent the needless loss of life.

‘A zero-tolerance drink drive limit is a proven effective solution, making clear to drivers that not a drop of alcohol is safe.’

It is hoped that this would put off dangerous motorists like White – who told police he was doing Dry January so couldn’t be drunk. 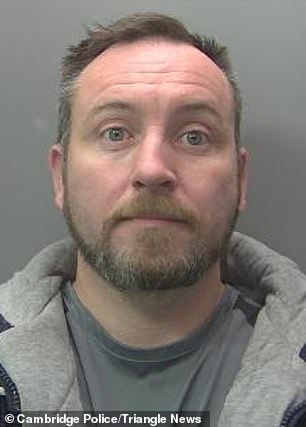 After telling police he’d stopped drinking alcohol as a New Year’s resolution he later admitted he’d drunk a pint of cider before the crash which killed Mrs Cunningham.

The serial offender – who was caught drink driving again just five months after the death crash – could be out in just four-and-a-half years.

And this has left devastated Fraya and Zak’s father Kris Cunningham who says there is no justice for the death of his wife and life-changing injuries to his children.

He wants MPs to urgently pass a new law which bans motorists from drinking any booze at all.

‘If the pictures of Fraya and Zackeri’s injuries in hospital save just two people then that’s a positive,’ Mr Cunningham, of Peterborough, Cambridgeshire, said.

‘To see your daughter lying there with more parts of her body broken than fixed is something I wouldn’t wish on my worst enemy.

‘Her stomach was left open for eight days, her arteries had ripped. I look at her now and I still can’t believe she’s here.

‘She wanted to see these pictures of herself, while she was recovering to fight harder.

‘I’m a firm believer in no alcohol for drivers – these laws must change. Alcohol affects everybody differently. We are now paying the price for the rest of our lives.’

Fraya was so horrifically injured that Mr Cunningham was forced to take photos of his daughter to prepare relatives for seeing her in hospital.

He was told she had died several times in the ambulance before reaching intensive care.

‘The first thought in my mind was about how I would tell my little boy that not only his mother’s dead, but his sister’s dead,’ the 37-year-old, originally from Cupar, in Scotland, remembered.

‘It was like an out of body experience – I was watching myself thinking.’ 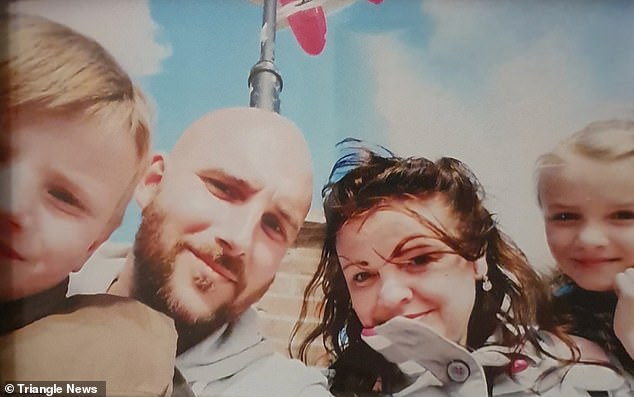 Zackeri, nine, Kris, Katy and Fraya (left to right) in a family photo taken before the tragic incident

When Fraya arrived at hospital, she was immediately surrounded by 40 doctors and nurses.

‘I was told she had a 10 per cent chance of survival,’ Mr Cunningham said. ‘We were taking it hour by hour, as we thought we would lose her.

‘So every hour she was here was a bonus.’

Fraya was covered in bruises, had two black eyes, her arms were in plaster and she had tubes all over her body.

Her father explained: ‘You can’t describe what it feels like to look at your daughter there, with plasters on her eyes to stop her eyes drying up.

‘There was nothing there. They had to drill into her head to release pressure on her brain.’

When Zackeri came out of intensive care, he wanted to see his sister.

Mr Cunningham had shown him a photo of Fraya – who was unrecognisable – to prepare him for the horror.

‘Until Fraya started showing signs of coming out of her coma he hardly said a word at all,’ he said.

‘He’s suffered a lot with guilt, seeing Fraya with all these broken bones and plaster casts.’ 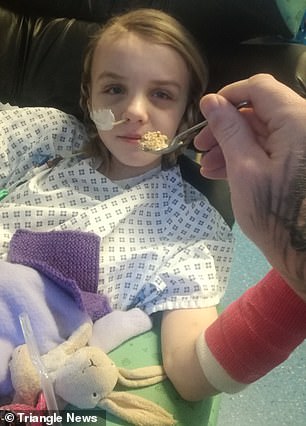 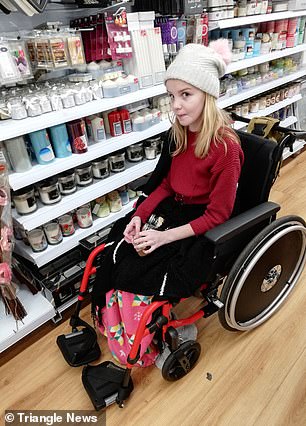 Doctors initially said Fraya had a 10 percent chance of survival, but she defied the odds to leave hospital before using a wheelchair

Fraya spent two months in Addenbroke’s Hospital, Cambridge, where her father said the care was incredible.

White was twice the legal limit when he tried to speed past a lorry at 73mph along a single lane road, near Crowland, Lincolnshire, on January 23 last year.

He forced a car to veer off the road, and in the resulting melee his van careered into Mrs Cunningham’s car.

The impact blasted the family’s Peugeot up in the air, and it crashed down upside down.

Mrs Cunningham died at the scene and if the car had rolled just millimetres more Zackeri and Fraya would have also been killed.

They were found by paramedics covered in blood.

Mr Cunningham was only five cars in front of his wife and children – yet only found out hours later of the tragedy that had unfolded behind.

‘He’s destroyed everybody who knew Katy,’ he said. ‘She was the most loving person going, and the best mother I could ever hope for.

‘She longed for it for so long, and she deserved more than that.’

Despite being well over the limit, it took police almost a year to arrest White in December 2019.

Just five months after the fatal crash, the serial drink driver was actually caught driving under the influence. 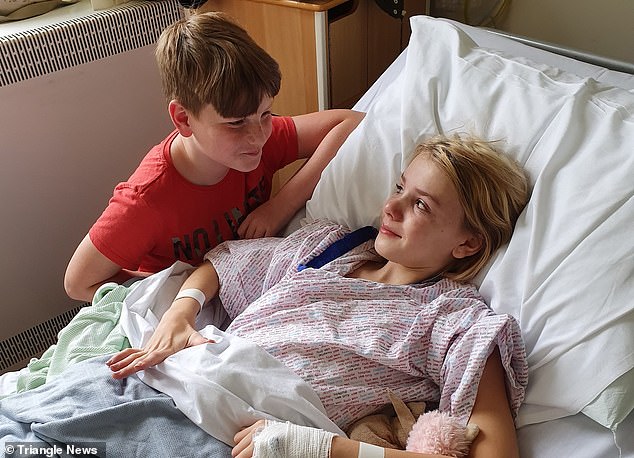 What is the drink-drive limit in England and Wales and how does it compare to other countries?

England, Wales and Northern Ireland’s drink-drive limit is 80 milligrams of alcohol per 100 millilitres of blood.

This cannot be exactly measured into units or drinks, as it depends on a number of factors including gender, weight and how quickly someone absorbs alcohol.

But it is likely that two pints of regular-strength lager or two small glasses of wine would put you over the limit.

It takes around two hours for a pint to leave your system and four hours for a large glass of wine.

England, Wales and Northern Ireland have the highest alcohol limit in the EU, and one of the highest in the world.

In Scotland, the limit was reduced to 50 milligrams per 100ml of blood in 2014, so just one drink would put you over.

This is the same as the majority of Europe, with Spain, Italy and France all having the 50 mg threshold.

Several countries allow motorists to consume the same amount of alcohol as England, Wales and Northern Ireland, and these include the USA, Canada and New Zealand.

A recent European Transport Safety Council report estimated thousands of lives could be saved by a zero tolerance limit.

It wasn’t until after he was convicted of that crime that police eventually charged the father-of-six with Mrs Cunningham’s death.

‘Ultimately this delay could have cost another life,’ Mr Cunningham said. ‘I think everybody is very, very lucky that it didn’t.’

His string of previous convictions, between 2008 and 2019, were read out in court.

The vast majority were motoring offences, including four times driving under the influence of alcohol.

He was also convicted three times of driving while disqualified and uninsured.

The serial offender also previously admitted failing to stop at an accident, failing to provide a specimen and aggravated vehicle taking.

Mr Cunningham called the sentence ‘pathetic’, adding: ‘You can’t move on from it because there’s no closure there.’ 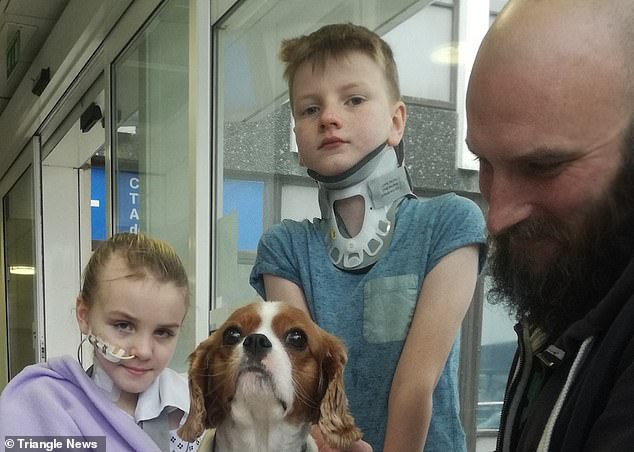 Fraya spent two months in Addenbroke’s Hospital, Cambridge, where her father said the care was incredible

Judge Matthew Lowe blasted White – who cried in the dock – for his crocodile tears.

He initially handed down a 13-year sentence, but had to take four years off for his guilty plea.

The maximum jail term for causing death by dangerous driving is 14 years.

Earlier this week, the Prime Minister announced he wanted to extend this to life imprisonment.