Girl, 13, ‘is tied up and gang-raped by four boys at Israeli school’s bomb shelter’

Girl, 13, ‘is tied up and gang-raped by four boys at Israeli school’s bomb shelter’

A 13-year-old girl has accused four older boys of tying her up and repeatedly raping her at a bomb shelter at her school in Israel.

Four 16-year-old boys allegedly took her to the school’s bomb shelter and raped her twice a day during recess over a 10 day period, according to a source at Israel’s ministry of education.

The girl’s father told Israeli TV station Channel 13 that they operated with ‘two guards outside, two inside – one raping her and the other taking pictures.’

They also ‘tied her up’ and threatened to kill her and her little brother if she told anyone, the father alleges.

‘The girl is devastated. Since then she has not left her room and has not stopped crying,’ he added.

A stock image shows children playing in a bomb shelter in the southern city of Netivot, which is close by to Gaza. Shelters are common in this region due to the risk of rocket fire from neighbouring Hamas militants. It is alleged that four boys took a 13-year-old girl to a bomb shelter at their school, twice a day for 10 days, where they tied her up and raped her repeatedly. Her father said that she has not left her bed or stopped crying since the incident

Her complaint was lodged on Friday, the same day that she told her dad about the incident.

Authorities released four teenage boys on Sunday after investigators after the Be’er Sheva Magistrate’s Court said that there was insufficient evidence to detain them.

According to Haaretz, the school learnt of the incident after the girl hesitantly confided in her teacher. She then told her father and then went to the police. She was unable to provide the names of the boys as they were older than her. 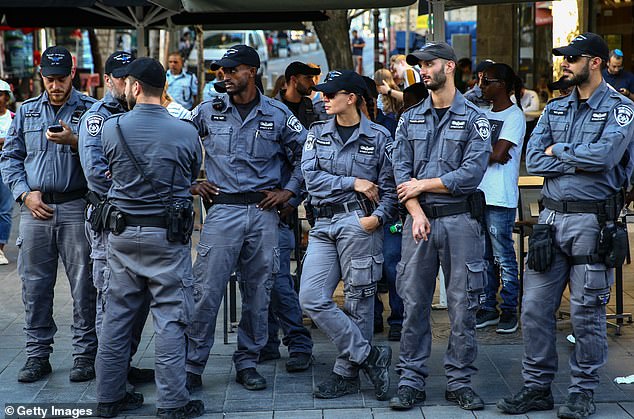 Stock image of Israeli police above. Israeli police investigators have said that four suspects have been released while one remains in custody. They were unable to find sufficient evidence for the four boys but have extended court opening times for the fifth. It is reported that two boys acted as guard while two boys filmed and raped the girl

One of the suspects alleged that friends of the girl’s family had threatened him after they found out he was accused. When confronted with the girl after his arrest, the suspect’s lawyer said that the boy did not know the victim, ‘had never met her’ and that ‘he wasn’t at the place where the girl says the rape happened.’

Investigators have been unable to find a video of the incident and a doctor has examined the girl but no findings have been released.

Officials have said that the girl will be treated at a specialist centre in Negev in southern Israel.

The attack reportedly happened at a school in the southern city of Netivot near Gaza.