Girl, 14, is left unable to ever have children after horrific beating

A schoolgirl suffered such a horrific beating from bullies in Russia that doctors believe she’ll never have children.

The girl, called Liza, had been lured to a deserted spot in the town of Mineralnye Vody in Russia’s south-western Stavropol Krai region, local media reported.

The 14-year-old was taken there after a boy her age called Dima, who she had reportedly fallen in love with, invited her to go for a walk. 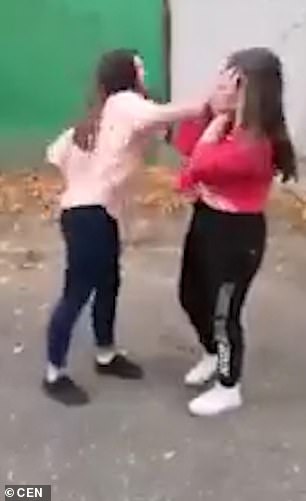 There, she was ambushed by five girls, all aged 13 and 14, who had been lying in wait for her – and suffered a three-hour beating that was filmed by one of the bullies.

They had targeted her because she had criticised their indecent behaviour at school, according to local media reports.

In the video, Liza, in a red top, is seen being attacked by a girl named in local media reports as Veronika Astapova, 14, who is in a white top.

Astapova can be seen punching the victim in the head before throwing her onto the ground and kicking her back and head.

Another girl, identified as Polina Duchkova, 13, can then be seen jumping and landing on the victim’s head and upper body with both her feet. 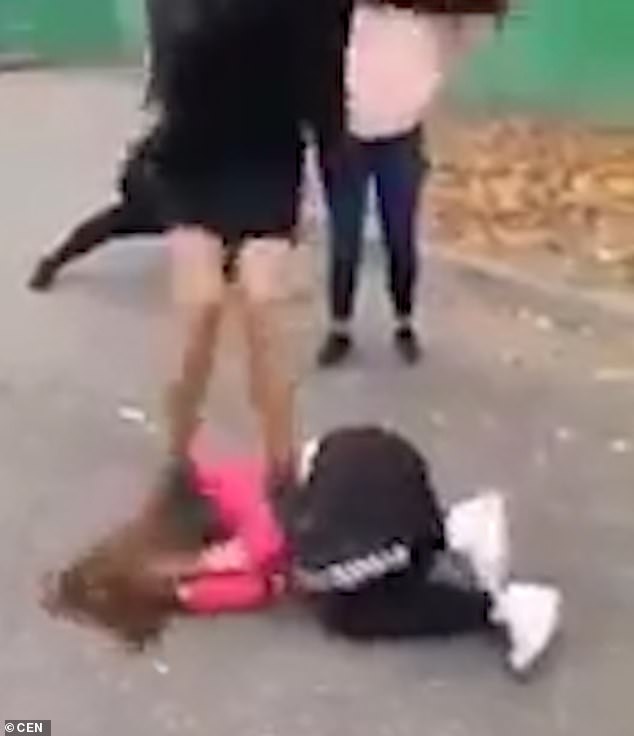 he girl, called Liza, had been lured to a deserted spot in the town of Mineralnye Vody in Russia’s south-western Stavropol Krai region, where five girls ambushed her

Astapova then continued kicking Liza’s back as she lies on the ground before being dragged aside by Dima.

Then, Liza is on her knees as she is repeatedly kicked in the head before Astapova is seen grabbing her hair and ramming her knee into Liza’s face.

The clip ends with Liza kneeling and apologising to the bullies after being forced to do so.

After a three-hour ordeal, Liza was let go, reports said. 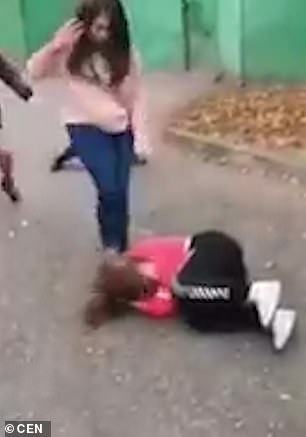 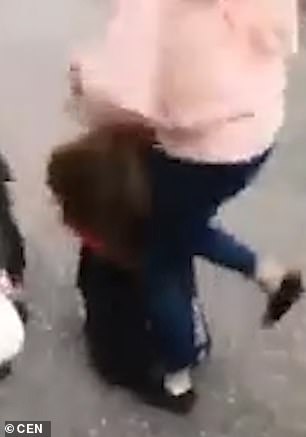 After a horrific three-hour ordeal, the bullies forced her to apologise and she was let go

She managed to make her way home and call an ambulance. Liza was taken to an intensive care unit in a serious condition.

She was diagnosed with brain concussion, serious injuries to her internal organs, especially to her airways and reproductive organs. Her whole body was reportedly covered with bruises.

And due to the damage done to her reproductive organs, doctors believe she won’t be able to have children in the future.

A police spokesperson said: ‘Police are checking the incident. All those involved have been identified and are being interrogated.’