Girl, 16, recalls being abandoned by her friends after rare bone cancer diagnosis

A schoolgirl has revealed how she was abandoned by her friends after they struggled to deal with her rare bone cancer diagnosis – only to discover an Instagram group dedicated to mocking her disability.

Cerys Davies, now 16, from Stafford, was just 13-years-old when diagnosed with Osteosarcoma – which occurs when the cells that grow new bone form a cancerous tumour.

Speaking exclusively to FEMAIL, she recalled how she initially thought the pain below her knee was just a sports injury – until doctors confirmed she had bone cancer, resulting in her leg being amputated and gruelling chemotherapy.

But not only did Cerys have to deal with the punishing treatment, she also suffered horrendous bullying following her diagnosis – with friends ‘ghosting’ her and cruel trolls even setting up a social media group to ridicule her disability.

Cerys is now speaking out in the hopes of encouraging people to be better friends to those battling cancer after teaming up with Teenage Cancer Trust’s new Friendship and Cancer campaign.

Cerys Davies (pictured recently, left, with her father Geraint), now 16, from Stafford, was just 13-years-old when diagnosed with Osteosarcoma – which occurs when the cells that grow new bone form a cancerous tumour 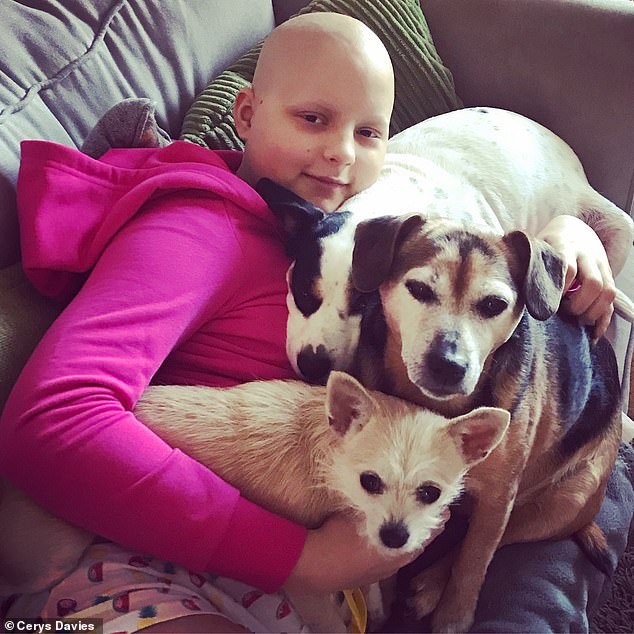 Speaking exclusively to FEMAIL, the teenager (pictured) recalled how she initially thought the pain below her knee was just a sports injury – until doctors confirmed she had bone cancer, resulting in her leg being amputated and gruelling chemotherapy

In December 2018, Cerys first noticed a pain in her leg, but was convinced it was to do with all the sports she was performing at the time.

Soon the aching was ruining Cerys sleep and her foot became painful to touch, leading her father Geraint to book a local doctor’s appointment, where the teenager was sent to hospital for an X-ray.

Recalling the moment she discovered her diagnosis, Cerys said: ‘My dad left his phone in his pocket after the appointment. We watched a film and when he looked at it again, he’d had so many missed calls from different hospitals asking him to ring them.

‘They sent us to the fracture clinic, and they asked if it was OK if the nurse specialist came in. She sat us down and said that they thought I had bone cancer. A biopsy confirmed that I had Osteosarcoma.

‘I called my best friend and we both cried on the phone. Then I said to my dad: “I will beat this”.’

Thankfully, Cerys best friend was ‘really supportive in the early days,’ with the student explaining: ‘When I was in too much pain to go out, she’d come around and we’d just watch TV together. 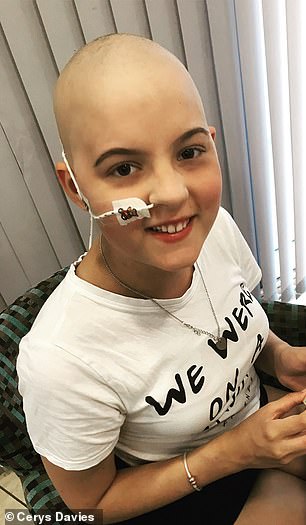 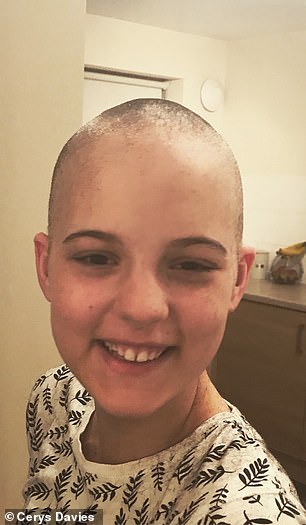 But not only did Cerys (pictured) have to deal with the punishing treatment, she also suffered horrendous bullying following her diagnosis – with friends ‘ghosting’ her and cruel trolls even setting up a social media group to ridicule her disability 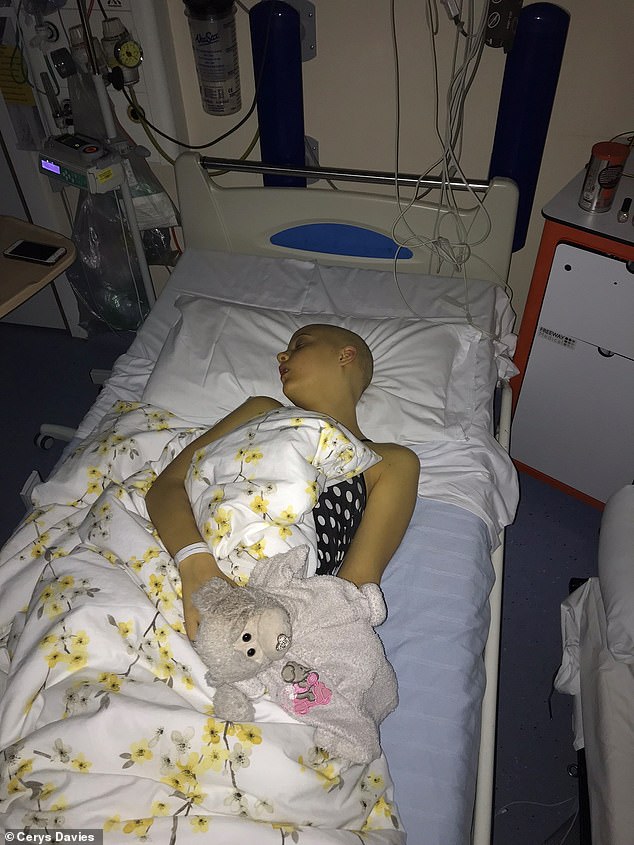 ‘I didn’t tell anyone else I had cancer until a few months later. I was still at school that whole time. When anybody asked about my crutches, I’d say I had ligament damage. I didn’t want to be the centre of attention, I hate that, so I kept it all quiet.’

Osteosarcoma is the most common type of bone cancer, usually diagnosed in teenagers and young adults.

It occurs when the cells that grow new bone form a cancerous tumour.

The cause of the cancer is unknown but it is thought to be related to rapid bone growth, such as adolescence.

If the cancer has not spread, the long-term survival rate is between 70 and 75 percent.

If osteosarcoma has already spread, such as to the lungs or other bones at diagnosis, the long-term survival rate is about 30 percent.

There are a few treatment options for osteosarcoma.

Often administered before surgery, chemotherapy uses drugs that help shrink and kill cancerous cells. The length of treatment varies and may depend on whether the cancer has spread to other parts of the body.

In most cases, surgeons can save the cancerous limb. The tumour and surrounding bone are removed and the missing bone is replaced with an artificial one.

She recalled: ‘Some girls said I was faking it all to get the attention of the boys, and some boys would take my crutches and hide them. If I ever walked without them, they would say: “It’s a miracle, she can walk”.

‘The boys that were stealing my crutches got told off, but they never got a proper detention or anything. I was told by a teacher that in life “you just have to deal with some people taking the micky”.

‘My dad went in to talk with the school and the bullying stopped for a while after that.’

However, when Cerys was due to start her chemotherapy, she knew she was going to lose her hair and ‘couldn’t keep her cancer a secret anymore’.

‘I worked with my Head of Year on an assembly where we were to tell everyone what was happening. I was going to talk about Teenage Cancer Trust and bone cancer for a while, but I was so nervous that I just said a few words and then went to sit at the back of the hall with my tutor,’ said Cerys.

‘When he told everyone that I had cancer everyone started looking around to see where I was, it was awful. People started hugging me afterwards, but it all felt really false.

‘I was expecting my friends who didn’t know until the assembly I had cancer to be supportive, we’d been in the same friendship group for two to three years. But by lunchtime the same day, most of them had disappeared.

‘I had arranged to meet them all after double science in the quad, but I was just left there waiting on my own, until my best friend turned up. The rest of them didn’t speak to me at all after that.

‘Eventually my best friend and I drifted apart too. There were a few people who I’m close with now from school, who I wasn’t close to during treatment, who have said that those friends at the time just didn’t know how to deal with it.

She added: ‘They’d had family members with cancer but had never known someone their own age with it, so they didn’t know what to say or do.’

But not only did Cerys have to deal with losing her friends, she also faced many problems with bullying throughout her treatment.

Describing one ordeal, she said: ‘I was really shocked when a boy I knew sent me a message and told me that there was a group on Instagram called ‘Cerys’s stump’ with about 20 people in it.

‘He told me that they were doing live streams about me, and sending messages, making jokes about my amputation.

‘In one message they joked that I’d need WD40 on my wheelchair after a shower. The boy that told me what was going on said he’d been added to the group but left it immediately. 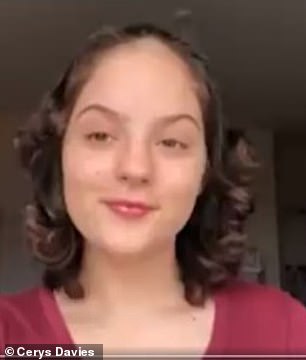 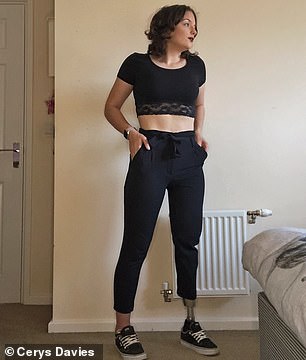 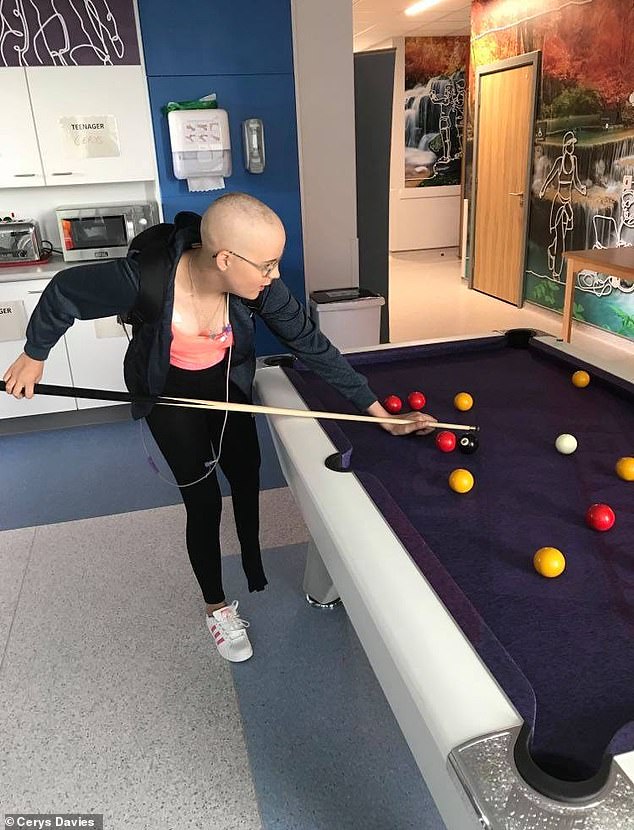 The teenager (pictured) said: ‘I’m starting a college course in September and my dream is to become a children’s cancer nurse. I want to help other young people with cancer like the nurses on the Teenage Cancer Trust unit helped me.’

‘What was even worse is that somebody who I’d been friends with before was a member of the group and had been making jokes too.’

She continued: ‘I was really ill at the time, my liver was failing due to the aggressive chemo I had to have, and they weren’t sure if I’d make it.

‘Looking over the screen shots he’d taken of the Instagram group was really upsetting, I couldn’t believe it, and I went to show them to my dad. Knowing that people were laughing at my illness was awful.

‘My dad spoke to the school, but they said they couldn’t do much about it – until he told them he’d take it up with the police. After that the school took action, and the boys involved got official warnings.’

Thankfully, Cerys wasn’t alone in her journey, having the help of her father as well as Teenage Cancer Trust.

Cerys’s tips for helping a friend through their cancer battle

Cerys said: ‘If your friend has cancer go and see them if you can. The littlest things like that are often the things that really help.

‘Just knowing someone cares and is thinking of you makes a difference.

‘It can be hard to fit in with normal teenager activities when you’re going through treatment. But where you can, please try and adapt things so your friend with cancer join in. For example, you could have an online games night.

‘They’ll definitely be things that they won’t be able to come to when they are really poorly – but inviting them means a lot and helps them feel like they haven’t been forgotten.’

‘One thing that really helped me get through all of this were the friendships I made with other young people with cancer,’ she said.

‘I was treated on the Teenage Cancer Trust unit at Birmingham Children’s Hospital and got really close to some of the other patients there, especially two friends who I’m still in touch with now.

‘When I was being bullied they’d send me supportive voice notes and messages or funny things they found on TikTok to cheer me up. We all meet up regularly, I’m planning a road trip with two of them, and I think we’ll all be friends for a really long time.

‘I try to look on the positive side of life and one upside of having cancer is that I have made some friends that I wouldn’t have made otherwise.

Cerys continued: ‘I left school in May 2021 and it was a bit relief to get away from those bullies – the cancer and the bullying are all behind me now. I have new friends, and I’m looking forward to the future.

‘I’m starting a college course in September and my dream is to become a children’s cancer nurse. I want to help other young people with cancer like the nurses on the Teenage Cancer Trust unit helped me.’

Cerys finished her treatment in March 2020 but has been left with long-term liver problems.

She said: ‘I have a liver condition from the chemotherapy, and I will have that for the rest of my life. The way they described my liver function at the hospital was that I look like an 80-year-old who has had a fairly good life.’

Visit www.teenagecancertrust.org/friends for information and tips from young people on how to be a good friend to someone with cancer, or to donate to support Teenage Cancer Trust’s work bringing young people together.