Girl, 16, screams in agony as she is brutally beaten for eloping with a man in India

Girl, 16, screams in agony as she is held by her hair and brutally beaten in front of her father for ‘disrespecting her village’ by eloping with a man in India

A 16-year-old girl in India has been brutally beaten by three men in front of her father as a ‘punishment’ for eloping with a man.

Footage appeared online of the defenceless teenager screaming in agony as she is dragged by her hair and repeatedly thrashed while a crowd gathers round to watch.

Police said her attackers inflicted the beatings, which took place in the remote Bilvant village in Gujarat’s Chhota Udepur district, as a form of punishment.

One man grabs the girl’s hair while landing a blow on her back, before ripping her pink sari from her shoulders as she wails in distress 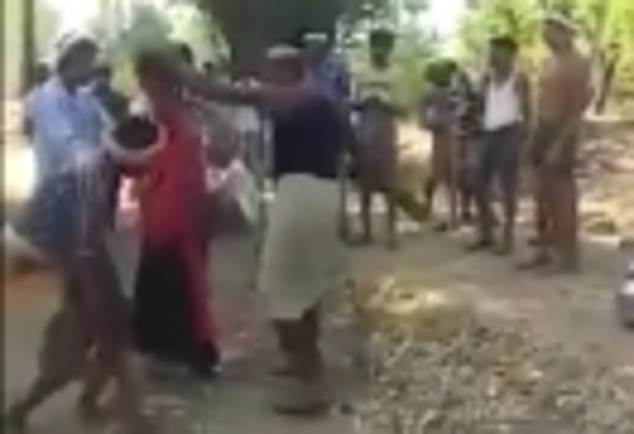 The three men crowd round the teenager as they violently attacked her in front of her father, who was forced to watch

The three men claimed that by eloping with the man she had brought ‘disrespect to their community’, Deputy Superintendent of Police A V Katkad said.

Footage of the beatings, believed to have been recorded by a villager on a mobile phone, show one man whipping her with a stick while another pins her arms down, leaving the teenager unable to defend herself.

The other two men repeatedly punch her in both her face and back, the force knocking her to the floor.

They rip her pink sari from her shoulders and continue to beat the teenager who wails in distress.

The entire incident took place in front of the teenager’s father who had been forced to watch, police said. 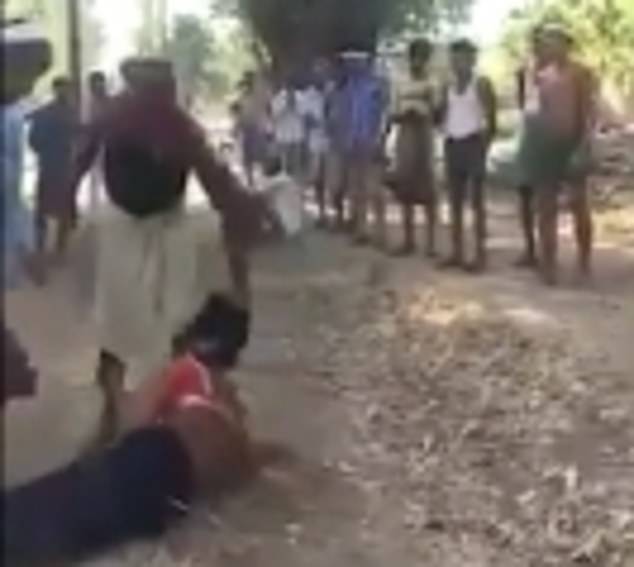 He later made a formal complaint against the men at Rangpur police station, Indian TV channel News18 said.

Police said they have lodged a case against the three accused men who they have named as Desingh Rathva, Bhipla Dhanuk and Udelia Dhanuk, as well as 13 others at the scene.

‘The girl had eloped with a man and went to a village in neighbouring Madhya Pradesh. She was thrashed as a punishment by these accused upon her return a few days back.

All 16 men have been booked on charges of rioting, criminal intimidation, assault and various sections of the Protection of Children from Sexual Offences Act, police said.