Girl, 17, goes to the doctor with intense pain in her ear – only to find GRASS growing inside of it

Girl, 17, goes to the doctor with intense pain in her ear – only to find GRASS growing inside of her head

A teenage girl has discovered grass growing inside of her ear after experiencing severe pain.

Eli Smit, a 17-year-old from Auckland, New Zealand, told her mother her ear was hurting and she was then taken to the doctor.

‘He looked inside my ear and said it looked like there was this really small piece of grass in there,’ Ms Smit told Now to Love.

Eli Smit (pictured), a 17-year-old from Auckland, New Zealand, told her mother her ear was hurting and she was then taken to the doctor

‘So he went to get his small tweezers and magnifying glass and then he pulled out this one piece of grass, but then he was like ”oh no, there’s more”.’

Another blade of grass about three centimetres long with a seed bulb attached was pulled out of Ms Smit’s ear – to the surprise of her doctor.

‘He was really shocked by that. He said that it shouldn’t have been able to grow in there. He could understand how the seed got in because it was really small – but what had grown was really big,’ Ms Smit said.

Her hearing improved and she felt instant relief as soon as the grass was pulled out. 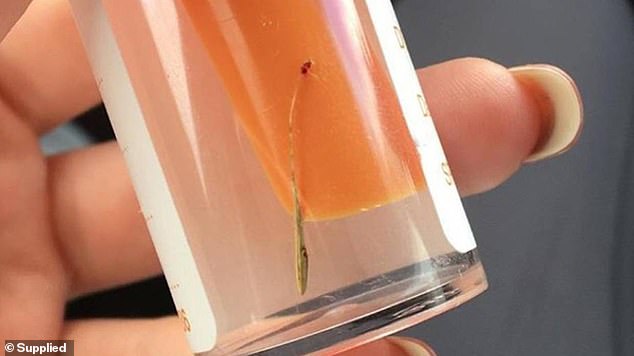 ‘I’ve seen cases of insects getting caught in ears, and sometimes they are still alive. But never a plant. Even on a global scale, I have only read a couple of cases and they were both out of China,’ he said.

Ms Smit said she was feeling ‘all good now’ and has decided to keep the plant.

‘The doctor gave it to me in a little container because he said I’d want to show my friends. And I do. Every time a friend comes over I say ”look at my plant”. I think it’s really funny,’ she said.