Girl, 5, has her eye removed the day after doctors found 10 tumours in it

A girl had to have her right eye surgically removed after she was diagnosed with the rare cancer retinoblastoma.

Gracie Corrigan, from Oregon, was found to have 10 tumours in her eye and doctors decided to operate the day after they found out.

Her mother, Elly Smith, first noticed something was wrong when she took a photo of her daughter and the flash made her eye glow strangely.

Since having her eye removed she has been given a prosthetic painted to match her remaining one, which Mrs Smith, 38, says Gracie has taken in her stride.

In a photo Mrs Smith took of her five-year-old daughter in 2016, Gracie Corrigan’s right eye can be seen glowing abnormally because of the flash – this is a typical sign of retinoblastoma 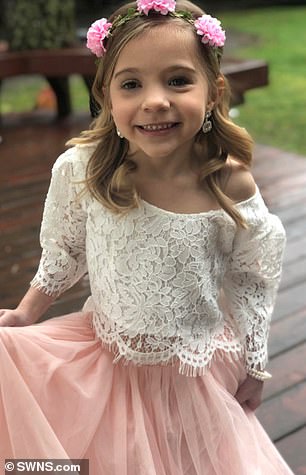 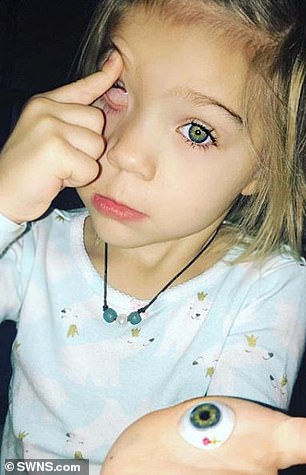 Gracie (left) had to have her right eye surgically removed after doctors found she had 10 cancerous tumours caused by retinoblastoma. She now has a painted prosthetic eye (pictured right)

‘She even has taken her spare eye in for show and tell,’ Mrs Smith said. ‘She has such an amazing spirit – she helped our family get through this.’

Mrs Smith became concerned about her daughter’s eye when it looked unusual in photos.

She took Gracie to see a doctor and she was then referred to eye specialists who diagnosed the cancer and acted quickly.

Mrs Smith said: ‘I knew something was wrong with Gracie because her eye would be glowing, and it looked like she had a lazy eye.

‘I made her an appointment the day I noticed it and her doctor referred us to an eye doctor.

‘I could tell something was wrong there and noticed the doctor’s chest getting red – I was just asking what was wrong.

‘When we found out we tried to explain as best we could to a two-year-old and said her eye had an “owee” and that the doctor had to take it out.’

Retinoblastoma is a rare form of cancer in the eye which usually affects children under the age of five.

About 300 children in the US develop it each year alongside 50 in the UK, according to figures.

It causes noticeable changes to the eye so is often caught early on – around 98 per cent of children with the disease are successfully treated. 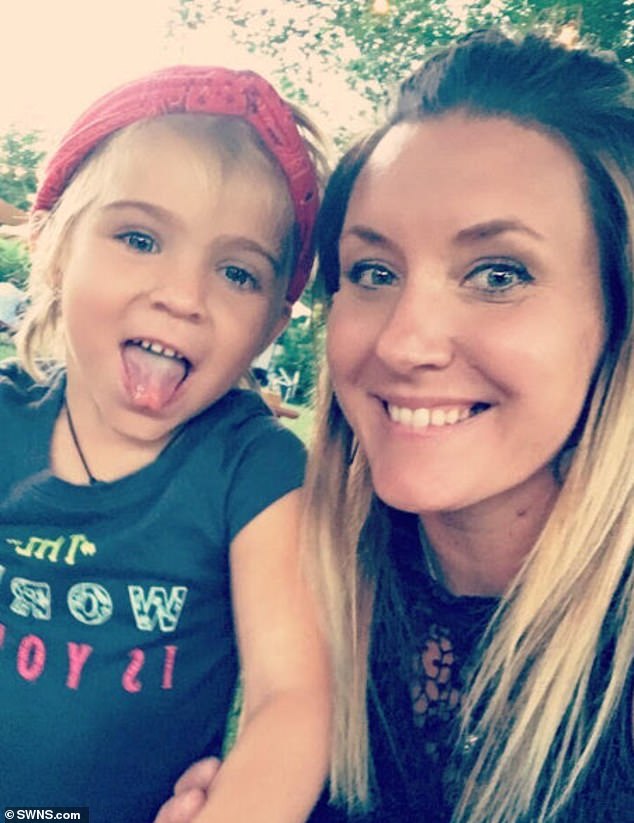 Gracie’s mother, Elly Smith, 38, first noticed something was wrong when she took a photo of her daughter with the flash on and one of her eyes was glowing 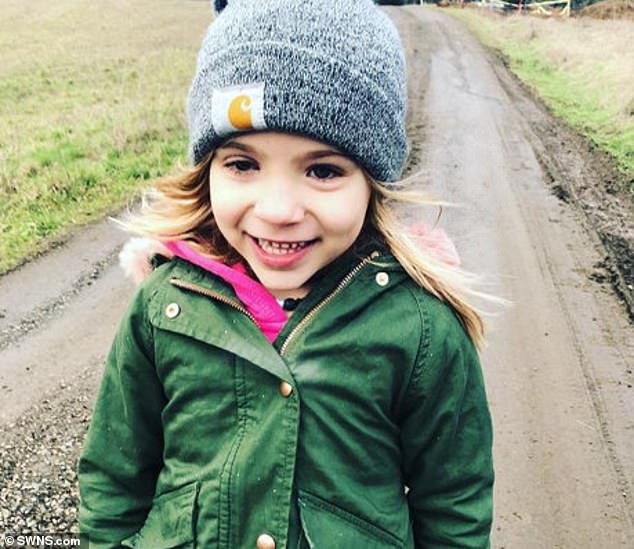 Gracie was diagnosed with retinoblastoma, a rare type of cancer which develops in the eye and usually affects children under the age of five 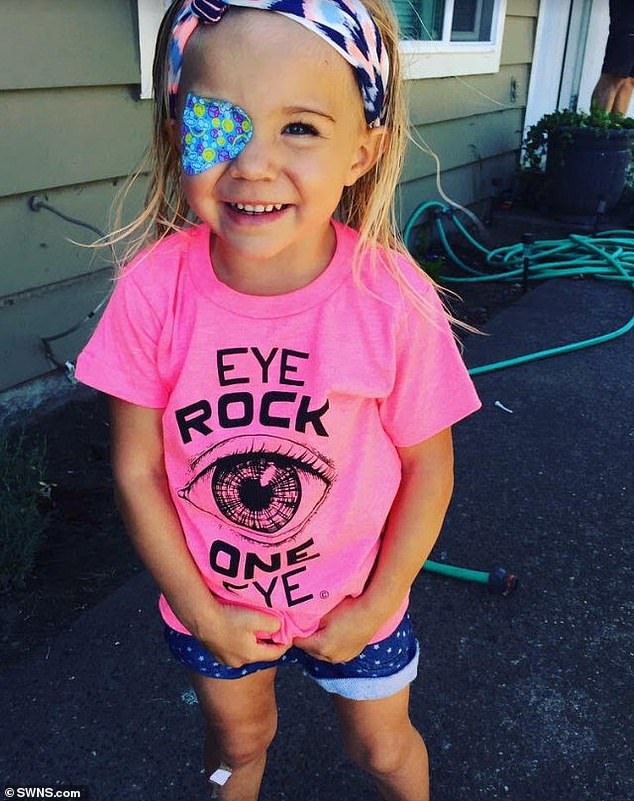 Mrs Smith noticed a white light in her daughter’s pupil when she took pictures of Gracie, then two years old, in May 2016.

Leukocoria, the medical term for an abnormal white reflection in the pupil, is often one of the first signs of retinoblastoma.

When a doctor explained Gracie had cancer Mrs Smith said she didn’t know what to do.

‘I just started crying,’ she said. ‘When we left I remember walking to the car crying and shaking, and buckling Gracie in the car seat not knowing what I was going to do.

‘I told Gracie “no matter what, you’re going to be okay”.’

The mother and daughter flew more than 2,500 miles (4,000km) to the Wills Eye Hospital in Philadelphia, where doctors counted 10 tumours in Gracie’s eye and optical nerve.

They explained she’d need to have her eye removed the next day.

Mrs Smith said: ‘I was a mess. We [went] there for a second opinion but never expected she’d need her eye out the next morning.’

Her husband Sean Corrigan flew to join them that night and Gracie’s eye was removed on June 1, 2016.

‘The first two months were really hard on her,’ Mrs Smith said. ‘She was nauseous and had [nerve damage] badly in her feet from the chemo.’

Three months after her eye was removed, Gracie received her prosthetic eye. 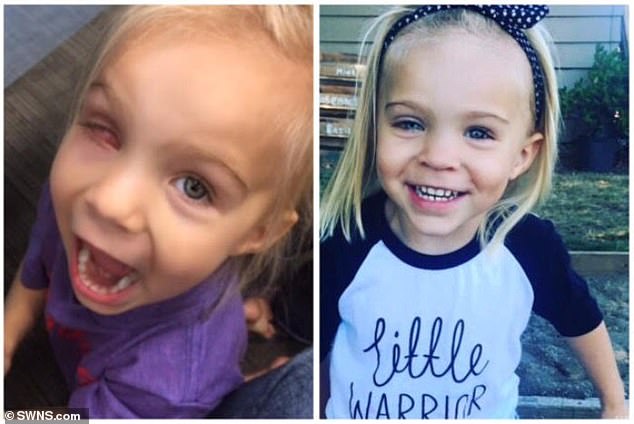 Gracie has been ‘resilient’ since having to adjust to life with her prosthetic eye, her mother said. It has now been nearly three years since the surgery Gracie (pictured with her mother shortly after her operation) now takes her prosthetic eye into school for show and tell and tells her friends about her ‘magic eye’, her mother said 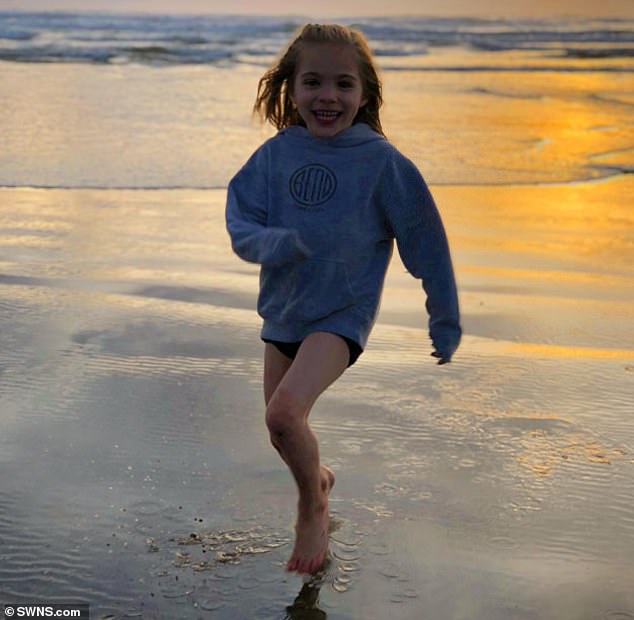 Gracie had to have chemotherapy after her operation but has since made a full recovery. She still has check-ups every three months but has so far remained in the all-clear

Mrs Smith said: ‘The ocularist painted the eye while we were in there and then we came back the next day to pick it up.

‘It was so emotional for me, I think I cried for the next 24 hours!’

Gracie adapted to her new eye quickly and has made a full recovery. She is still closely monitored and has tests every three months, but has had no problems so far.

Now, she lives with no restrictions, playing with other children her age and telling all her friends about her ‘magic eye’, her mother said.

‘Gracie was fine with it,’ Mrs Smith said about her daughter’s new eye. ‘She is so resilient.

‘When they make the eye you get to choose something to put on the top so you know which is the top of the eye – Gracie chose a horse.

‘It was a hard day for me. Gracie had been wearing an eye patch since the removal and seeing the prosthetic eye just made it all real.’

Retinoblastoma is a rare type of eye cancer that usually affects children under the age of five.

As it is usually caught early in the UK, 98 per cent of children with the disease are successfully treated.

About 50 children develop the condition every year in Britain.

It affects up to 300 youngsters annually in the US.

Retinoblastoma is specifically a cancer of the retina, which is the light-sensitive lining at the back of the eye.

It can affect one or both eyes.

A fault gene is responsible in about 40 per cent of cases. This can be inherited from the sufferer’s parents or may occur spontaneously.

The most common symptoms are the pupil looking like a cat’s eye and the child developing a squint.

The cat eye look is most commonly seen in photos.

Small tumours can usually be treated with laser or freezing treatment.