Girl, 6, born without a hand is able to hold her dolls after a stranger made her a bionic arm

For the first six years of her life Keira Campbell struggled to pick up her dolls or hold  a milkshake glass with both hands.

Now thanks to the kindness of a stranger, she can do both.

The young girl from Hardwick has had her life transformed by a 3D robotic arm, which was created by Callum Miller, 51.

Keira’s mother Nikki Talbot, 27, reached out to Mr Miller after he hit the headlines earlier this year when he created a robotic left hand for his 10-year-old son Jamie, leaving him able to high-five and play catch with his father.

Keira’s artificial limb has also boosted her independence and confidence, and even has the youngster desperate to go back to school after the Easter holidays so she can show the artificial limb off to her friends.

Ms Talbot said: ‘She can now hold stuff properly which she couldn’t before, she’s loving it. She’s becoming more independent’.

Mr Miller, from Roseworth, is hoping to update Keira and Jamie’s arms with more advanced designs, such as sensors that allow finger movement, shortly.

Born without a hand, Keira Campbell, six, was made a bionic arm by a stranger

Speaking of the impact the artificial limb has had on her daughter’s life, Ms Talbot said: ‘Keira was so excited when waiting for her arm. As soon as she received it she was over the moon.

‘I’ve never seen her this excited to go back to school. She’s really looking forward to showing all of her friends.

‘She’s getting used to using it day by day and she can put it on herself now and she was using it to drink a milkshake.

‘She’s becoming more independent and I just can’t thank Callum enough for what he has done. I’m so grateful.’

Speaking of how he plans to take the robotic arm further, Mr Miller said: ‘I’m still looking at advancing Jamie’s arm with bionics and I’ve told Nikki that Keira will benefit from that too, that’s an obvious progression.

‘I’ve ordered some purple filament to do another couple of arms for her in a week or two as she’ll need a few really.’ 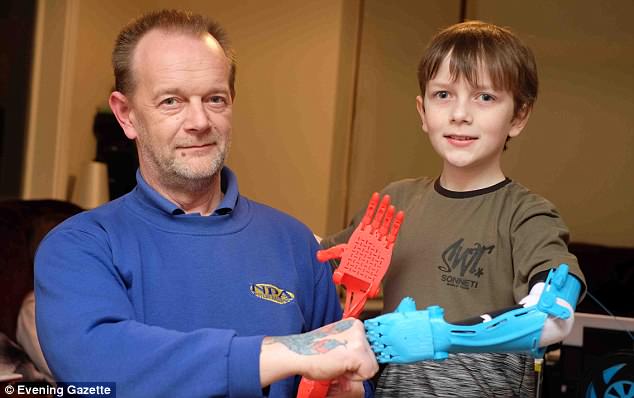 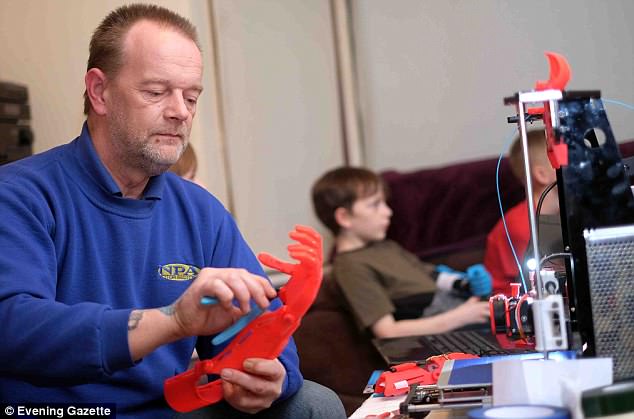 Mr Miller made the limbs using a 3D printer, bought from eBay, and downloaded arm designs

Why did Mr Miller create the robotic limb?

Disappointed with their 18-month waiting list, Mr Miller bought a printer off eBay and downloaded arm designs from the charity.

The limb was then adapted to create more flexible arms that are operated by leads running from the user’s elbow.

Mr Miller plans on adding sensors to his son’s arm to allow him to have more movement in his fingers.