Girl, 6, with egg allergy wins £2,000 payout after she suffered severe reaction to pudding

A six-year-old girl is to receive a £2,000 payout after she suffered a life-threatening reaction to a school pudding given to her by staff who had been told she had an egg allergy.

Caroline Harman, 37, from York, was told by doctors her daughter Maizy Harman ‘would have died’ had she not been rushed to hospital after being served the egg-based pineapple pudding by school staff in September 2018.

Following the incident, North Yorkshire County Council, which provides meals at Woodthorpe School and 271 other schools, pleaded guilty to failure to provide safe food and was ordered to pay £2,000 compensation to Maizy at York Crown Court.

The terrifying ordeal comes two years after Maizy nearly died after being given a chocolate brownie during a wedding reception at a local golf club in East Yorkshire when she was just three.

Maizy Harman, six, from York, was rushed to hospital in September 2018 after she was served an egg-based pineapple pudding by staff at Woodthorpe School

York Crown Court heard that Maizy struggled to breathe, turned red and was covered with an itchy rash after eating the dessert at the school.

Craig Hassall, prosecuting said that a system in place at the school to ensure children with allergies were only given safe food did not include dessert.

Maizy had spent just 16 days in her reception class at the school when she was given the dangerous dessert despite her parents making clear to teaching staff that their daughter was allergic to eggs and milk.

Ms Harman said: ‘The pudding made her sick, gave her breathing difficulties – coughing, wheezing and shortness of breath.

‘There were hives all over her body and she was taken to hospital by ambulance. Maizy was in hospital until 7pm that night until she was observed eating an evening meal.’

An emergency dose of the anti-allergy pills antihistamines had spared the child from further harm in what Ms Harman agreed was a ‘catalogue of errors’ by Woodthorpe School in York.

She continued: ‘It was yes and absolutely avoidable had they just taken a few more seconds and checked the ingredients as Maizy’s teacher did ask them to.

‘She is now understandably extremely anxious around food. I only let her go school meals to try and build her confidence after an allergy incident at a family wedding two years prior.’

She added: ‘I don’t think Maizy will ever eat food out again. She always had anxiety, but it is much worse now. As we know with recently allergy incidents over the past couple of years it could have been much worse.

‘Thankfully it wasn’t. This was never about any money or compensation. It was always about raising more awareness for other allergy sufferers.

‘She is six now. She was just nearly five when it happened as her birthday is in October.’

York Crown Court heard the child was given a pudding from a recipe containing 20 eggs in September 2018. 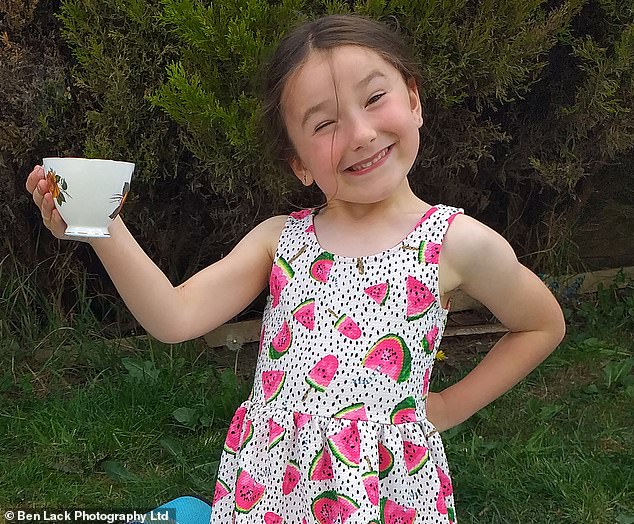 The schoolgirl is to receive a £2,000 payout after she suffered the life-threatening reaction 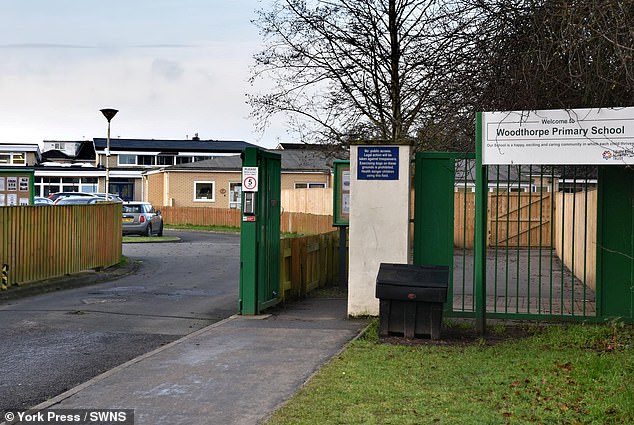 North Yorkshire County Council, which provides meals at Woodthorpe School and 271 other schools, was ordered to pay £2,000 compensation to Maizy

Mr Hassall said her parents spoke to staff about what she could eat and it was decided she would only have fruit or flapjacks for dessert.

However, the school’s cook decided to deal with Maizy’s food herself and did not write the information given at the meeting down, he told the court.

The cook was not at work when Maizy’s class teacher spotted the child was given the egg-based pudding and queried it with the kitchen staff.

However after the kitchen staff made sure she did not have custard with it, as she is also allergic to milk, the child was allowed to eat the desert, the court heard.

As a result of the terrifying ordeal, Maizy refuses to eat anything that has not been prepared at her home.

North Yorkshire County Council has now been fined £4,000 and been ordered to pay £14,161 prosecution costs and £2,000 compensation to Maizy.

Judge Sean Morris, the Recorder of York, said Maizy’s reaction after the school ‘could have been worse’.

He said: ‘This was the first time it had had an incident.’

He told the court that City of York Council, which brought the prosecution, had given its catering service at Woodthorpe a five star food hygiene rating six months before the incident.

The inspection found that the caterers handled allergens and had not raised any concerns, he added. 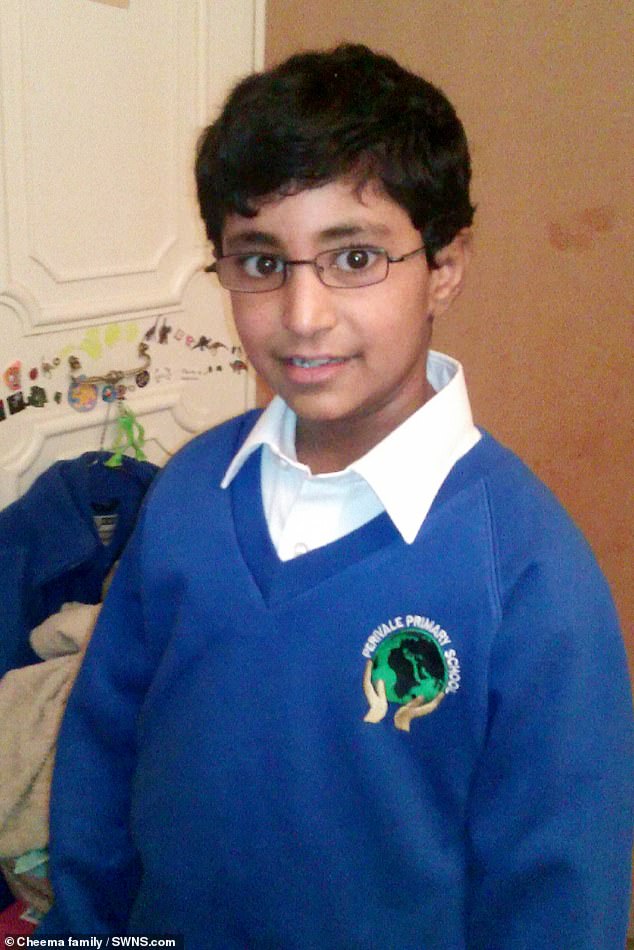 Karanbir Cheema, known as Karan, was 13 when he died in July 2017, ten days after he fell unconscious after the cheese was flicked at his neck while on a break at his school in Greenford, West London 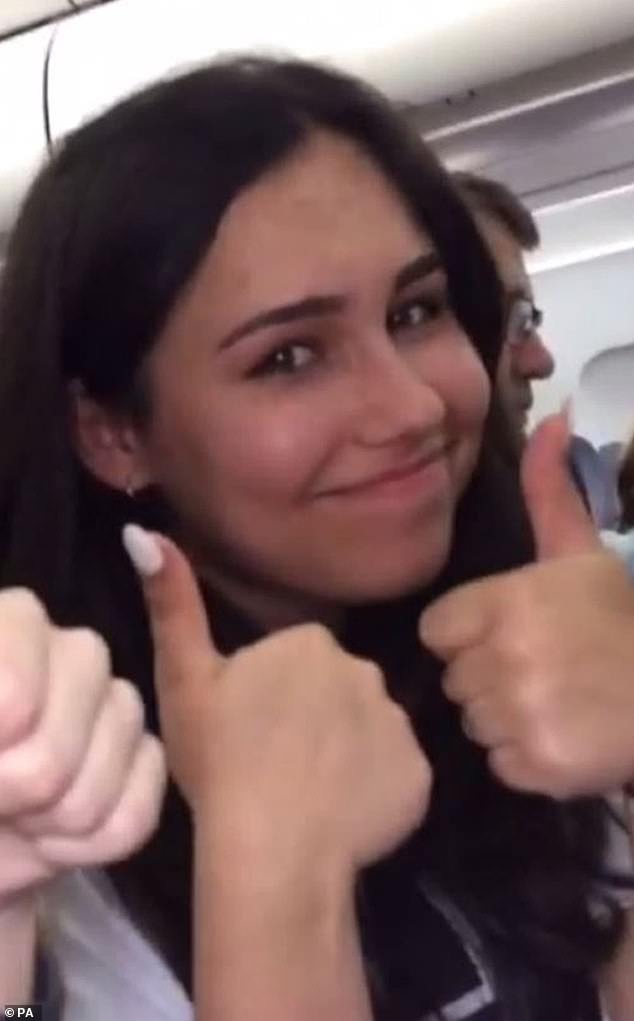 He told the court the giving of the pudding had been a ‘simple mistake’ and disputed the prosecution’s claims there was a systematic failing in the catering at the school.

Following the case, Maizy’s mother called on caterers to ‘triple check’ the food they give to people with allergies.

She said: ‘If there is any doubt, just don’t give it. It’s had a massive effect on Maizy, it’s awful. It’s going to impact her for a long time.

‘We still find people taking it with a bit of salt. People need to know how much of an impact it has.

The incident comes three years after Karanbir Cheema, known as Karan, 13, died from an allergic reaction in July 2017 after a classmate flicked a slice of cheese at his neck at William Perkin Church of England High School in Greenford, West London.

A court later heard that the school had failed to properly educate pupils about the ‘grave consequences’ of his allergy.

In 2018, Natasha Ednan-Laperouse, 15, was on a dream trip to Nice with her best friend and her father when she ate a Pret A Manger sandwich laced with sesame seeds not listed on the label and died of an allergic reaction.

Following the teenager’s death, the food company said it would ensure there was ‘meaningful change’ and would include a full list of ingredients on their food products.