Girl, 7, and her dad are shot at Chicago McDonald’s drive-thru

A seven-year-old girl was shot dead in a horrific act of violence at a McDonald’s drive-thru in Chicago on Sunday afternoon.

It happened just after 4pm in the Windy City’s Homan Square neighborhood.

Jaslyn Adams, 7, was hit multiple time and rushed to hospital where she was pronounced dead. Her father, Jontae Adams, 28, was also seriously injured as the pair waited in line in the family car to get food.

Police are still hunting for the suspect. It is not clear what led up to the shooting.

Video shot by those at the scene sees officers pulling the little girl out of the car and rushing her into the back of a police car in a bid to get her to hospital as quickly as possible.

A person can be heard exclaiming, ‘Oh s***! They killed a baby!’ 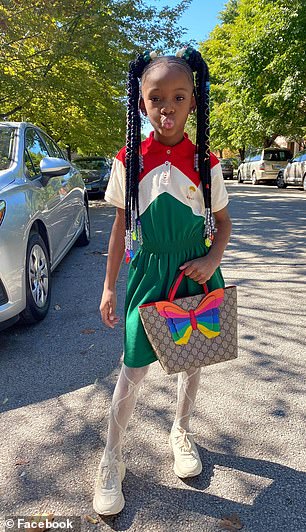 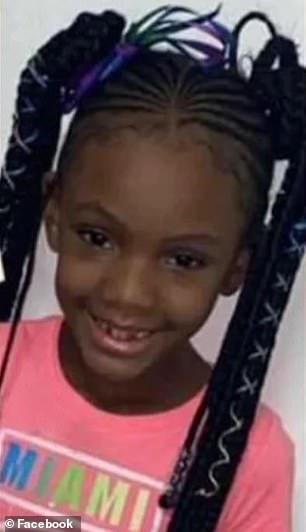 Jaslyn Adams, 7, was hit multiple time and rushed to hospital where she was pronounced dead 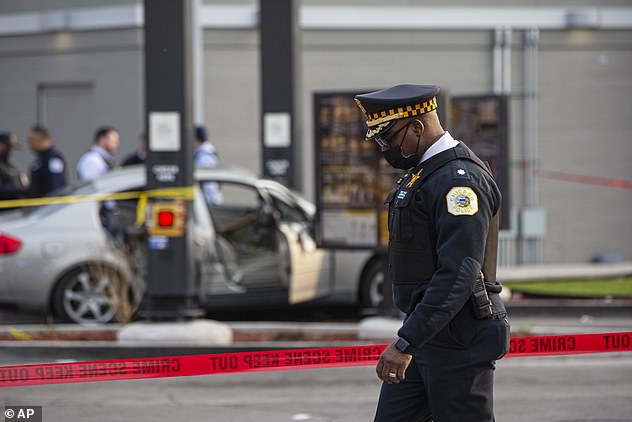 A police commander walks by as police investigate a crime scene where Jontae Adams, 28, and his daughter Jaslyn, 7, where shot, resulting in Jaslyn’s death 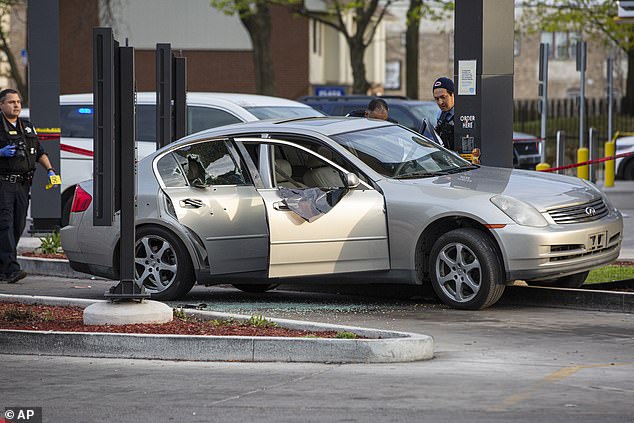 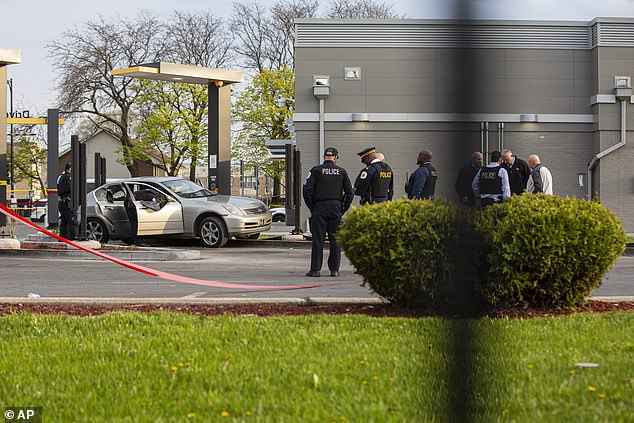 Police are still hunting for the suspect. It is not clear what led up to the shooting 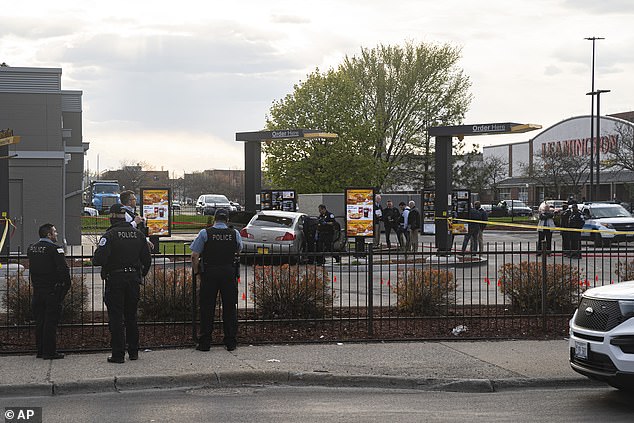 Police investigate a crime scene where Jontae Adams, 28, and his daughter Jaslyn, 7, at a McDonald’s drive-thru, Sunday, April 18 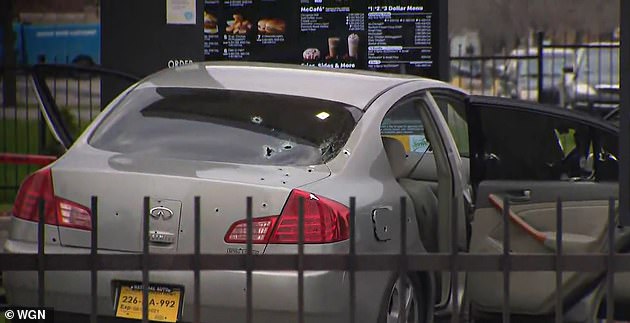 According to Chicago police, both victims were inside the vehicle when they ‘heard gunshots and felt pain’. The car could be seen riddled with at least 15 bulletholes

‘He said, ‘Ma, come get me. They just shot my baby,’ McMullen told the Chicago Sun Times.

Joslyn was a student at Cameron Elementary School. She was nicknamed Pinky ‘because she was bright’ and pink was her favorite color, family members said. 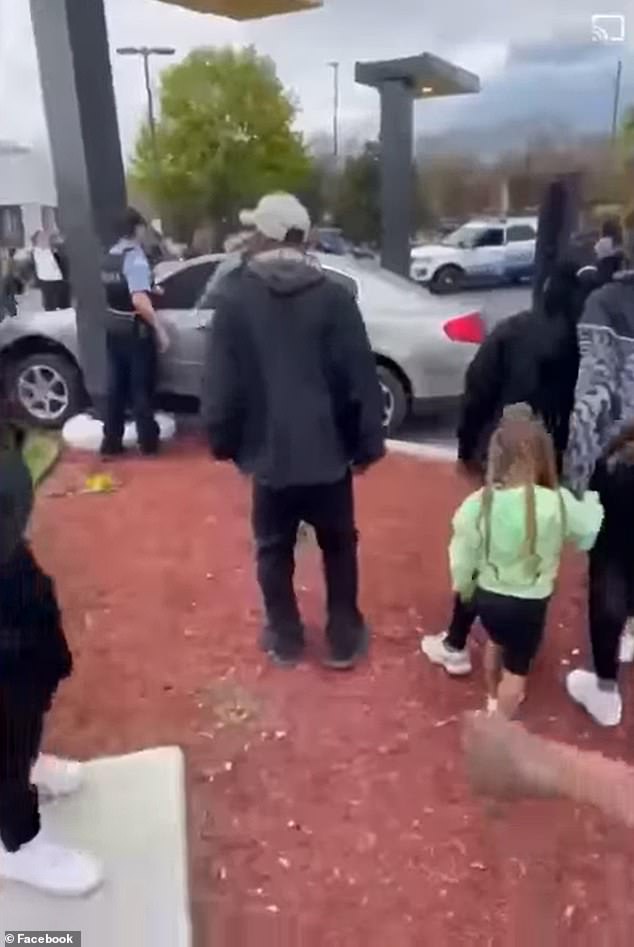 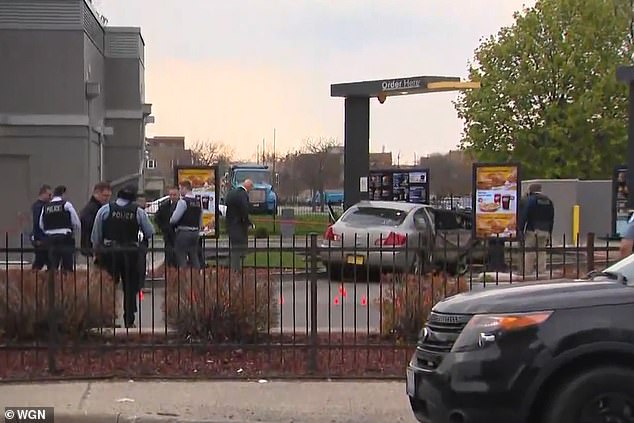 The bullets stuck the girl’s body ‘multiple times’  while her 28-year-old father was hit in the torso.

Their car was left riddled with bullet holes and shell casings were seen all around the vehicle.

Police said the shooting was believed to be gang-related.

The pair were both rushed to John Stroger Hospital where Jaslyn was pronounced dead. The father is currently in serious condition, according to police.

The exact circumstances leading up to the shooting remain unclear.

No suspects are yet custody but detectives are investigating the shooting

Marvin Edwards, president of 100 Men Standing, a group advocating against gun violence, encouraged anyone with information relating to the shooting to come forward.

‘We are sick and tired of this. It makes no damn sense,’ Edwards said.

‘Whoever pulled this trigger on this young lady and took her life, trying to get something to eat from McDonald’s, whoever is housing these individuals, turn these people in… We are pleading with you, do not let this go undone. Turn them in right away. This family are going through living hell right now because of the acts of some fools.’