Girl, 9, dies from COVID-19 in Florida – the fifth and youngest child to die from virus in state

A nine-year-old girl has died from the coronavirus in Florida, making her the fifth and youngest child to die from the infection in the state.

According to data from Florida’s Department of Health, the girl had not recently traveled or had any contact with someone who had the virus.

It’s unclear if the child had any underlying medical conditions.

The child is the fifth minor to die in Florida. Two 11-year-olds, a 16-year-old, and a 17-year-old have also died from the virus.

A nine-year-old girl has died from the coronavirus in Florida (file image), making her the fifth and youngest child to die from the infection in the state. The child is the fifth minor to die in Florida. Two 11-year-olds, a 16-year-old, and a 17-year-old have also died from the virus 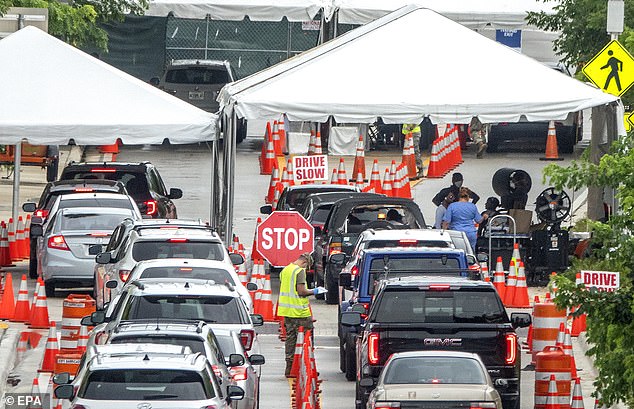 Florida (testing pictured in Miami Beach) reported a record one-day increase in COVID-19 deaths on Thursday with 173 lives lost, according to the state health department. The state has reported 379,619 infections and 5,345 deaths

No other information was immediately available about the girl’s death and the child has not been identified.

But as of Friday, more than 23,000 minors have tested positive for the virus across Florida. Health officials said the positivity rate of the children tested is 13.4 per cent.

Florida reported a record one-day increase in COVID-19 deaths on Thursday with 173 lives lost, according to the state health department. The state has reported 379,619 infections and 5,345 deaths.

The total number of coronavirus cases reported in the United States passed 4 million on Thursday, reflecting a rapid acceleration of infections detected in the country since the first case was recorded on January 21, a Reuters tally showed.

It took the country 98 days to reach 1 million cases, but just 16 days to go from 3 million to 4 million, according to the tally.

The average number of new US cases is now rising by more than 2,600 every hour, the highest rate in the world.

As the pandemic has spread widely over the country, moving from the early epicenter of New York to the South and West, federal, state and local officials have clashed over how to fight it, including over how and when to ease social and economic restrictions aimed at curbing the infection rate.

Whether to order the wearing of masks, a common practice in the rest of the world and recommended by the federal government’s own health experts, has become highly politicized, with some Republican governors in hard-hit states particularly resistant. 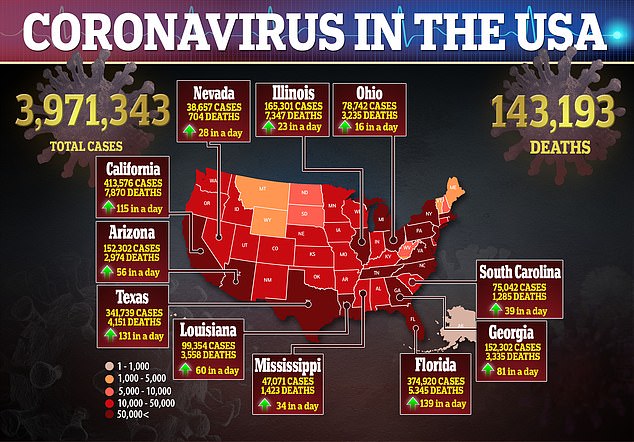 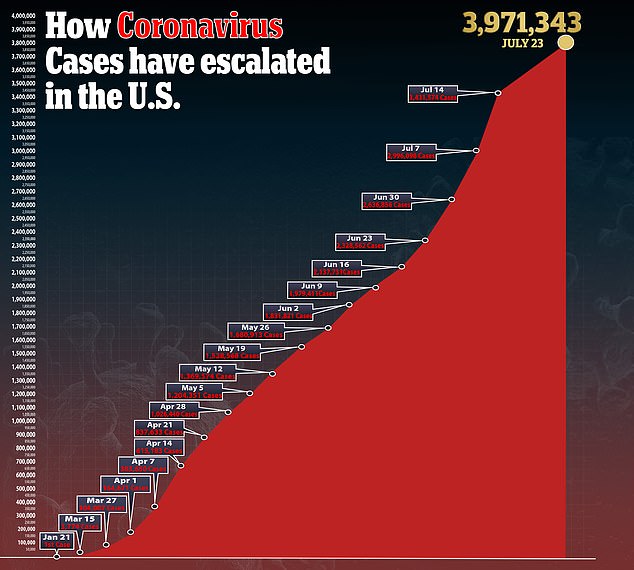 President Donald Trump, who faces falling poll numbers over his handling of the health crisis ahead of an election in November, has long resisted wearing a mask but this week encouraged Americans to do so.

‘It will probably unfortunately get worse before it gets better,’ Trump said from the White House on Tuesday.

Miami Mayor Francis Suarez said on Thursday that he believes his city’s strict rule on mask-wearing is making a difference, citing improving numbers there.

‘The remediation efforts that we’ve taken, including the mask in public rule, are working,’ he told CNN.

Another partisan point of contention is whether schools should start fully opening in August despite concerns that doing so could cause infections to spike.

Trump has threatened to withhold federal funding if schools do not reopen, but he told a press briefing on Wednesday the decision would ultimately be up to state governors.

On Wednesday, COVID-19 deaths rose by more than 1,100 for a second day in a row, including record single-day increases in fatalities in Alabama, California, Nevada and Texas.

The daily death tally is still well below levels seen in April, when on average 2,000 people a day died from the virus.