Girl born with no IRISES in her eyes, has to wear sunglasses to protect her from blinding sunlight

A two-year-old girl is forced to wear sunglasses every day because she was born without irises in her eyes, making her extremely sensitive to light.

Rhiannon Kay, from Norfolk, has completely black eyes because the coloured part of her eye is missing, caused by a rare condition called aniridia.

She is unable to control the amount of light going into her eye because the missing iris is what helps the pupil to get bigger and smaller using muscles.

Parents Teresa, 36, and Vaughan Kay, 38, have to make sure the blinds are drawn during the day to dim the light in their home.

Even in winter, Rhiannon has to wear a hat and super shaded sunglasses, which has attracted cruel comments from strangers who don’t understand.

Rhiannon has some vision, which allows her to see things that are close up, but in the future she may face other eye problems or kidney cancer due to the condition.

Two-year-old Rhiannon Kay (pictured), from Norfolk, doesn’t have irises – the coloured part of her eye, caused by a rare condition called aniridia 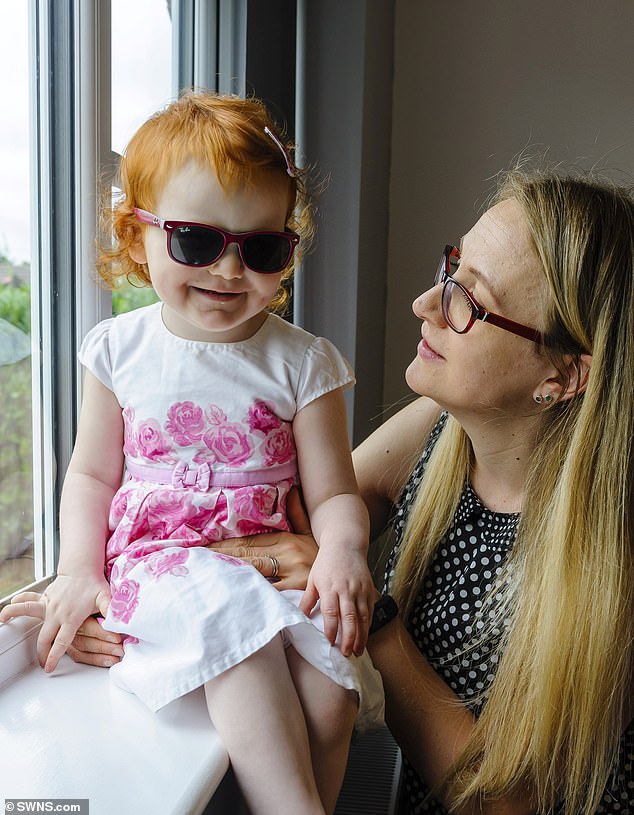 Rhiannon is forced to wear sunglasses every day because her eyes are extremely sensitive to light. Pictured with her mother, Teresa Kay, 36 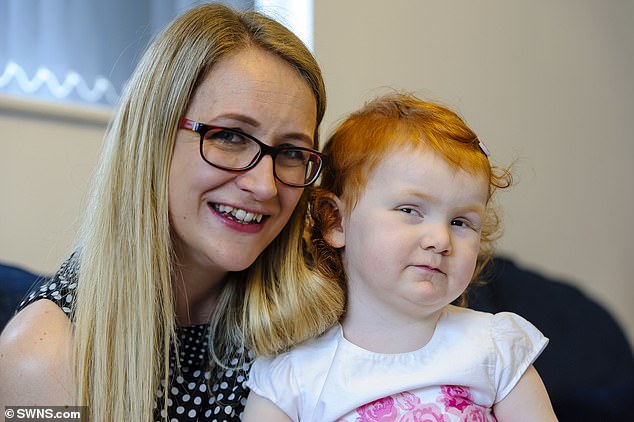 Mr and Mrs Kay were first made aware of a problem with their daughter’s eyes shortly after she was born on September 28, 2016.

Mrs Kay said: ‘When she was first born, the doctors were doing checks and they said there was something wrong with her pupils.

‘They said she didn’t have irises. We didn’t know exactly what it was at first.’

The couple feared their daughter was blind because her eyes didn’t follow the light, before she was diagnosed with aniridia.

The rare genetic condition affects roughly one in every 75,000 babies worldwide, according to Genetics Home Reference.

It’s caused by a mutation to a the PAX6 gene, which provides instructions for the early development of the eyes, brain and spinal cord – on rare occasions, aniridia patients have behavioral problems, developmental delay, and problems with smell.

Mrs Kay said: ‘When she was younger her eyes would roll constantly.

‘She would look through the right of her eye to look straight where her eyes shake the least.’ 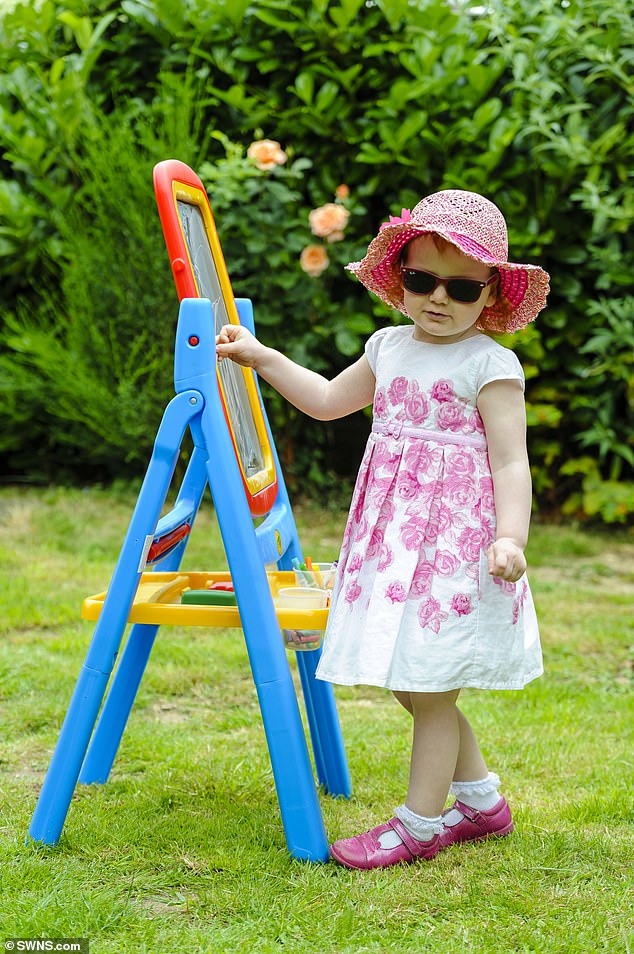 Rhiannon’s rare condition only affects around one in 75,000 babies born worldwide 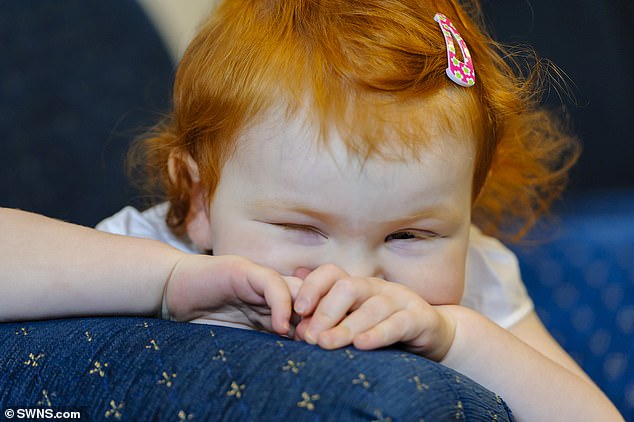 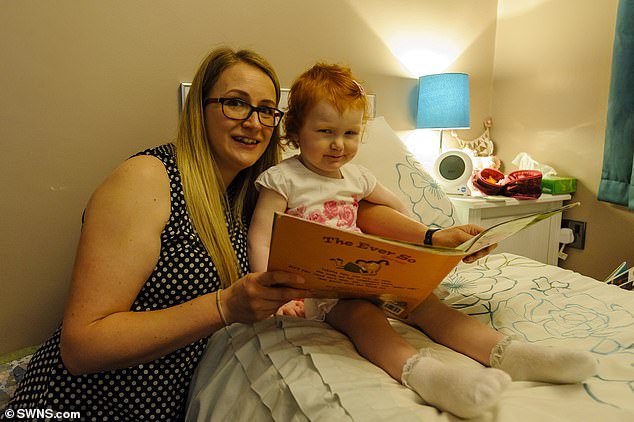 Rhiannon, pictured reading with her mother, can see things that are close up 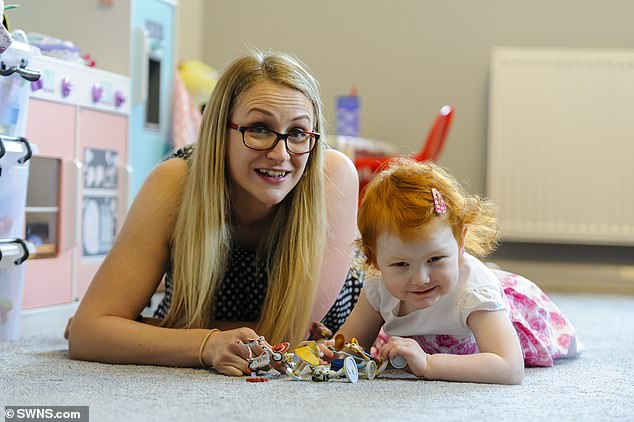 Mrs Kay said Rhiannon’s pre-school try not to change the layout of their rooms too much because Rhiannon often trips over things. Pictured at home playing with toys

It was then that the parents were told their daughter had also developed nystagmus, also known as involuntary eye movements, due to her condition.

Rhiannon also developed cataracts and may suffer from other eye conditions in the future.

Despite her condition, Rhiannon can still see things close up but struggles seeing things in the distance.

Although there is a treatment abroad where synthetic irises can be fitted, the parents are reluctant to put Rhiannon’s eyes through too much surgery.

Mrs Kay said: ‘It is very rare she will be outside without sunglasses on.

‘She is so sensitive to light so all the windows in our car are tinted. If she did go out without sunglasses then it would be painful and uncomfortable for her.

‘The things she struggles with at the moment are depth perception so she can trip up and fall over things.’

Rhiannon is able to go to pre-school every week, where they try not to change the layout of the room too much.

Mrs Kay said: ‘We think she struggles to see things in the distance. She’s able to feed herself and play with her toys. She enjoys watching TV and playing with her Disney toys.

‘But her hearing is so precise, she can hear a car pull up outside our house while I can’t hear a thing.’ 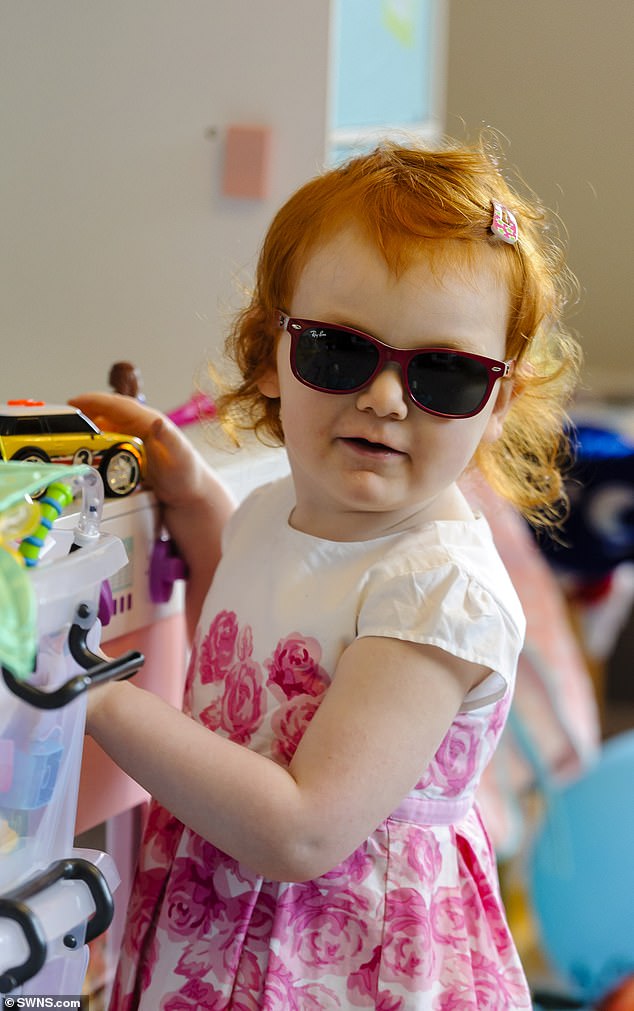 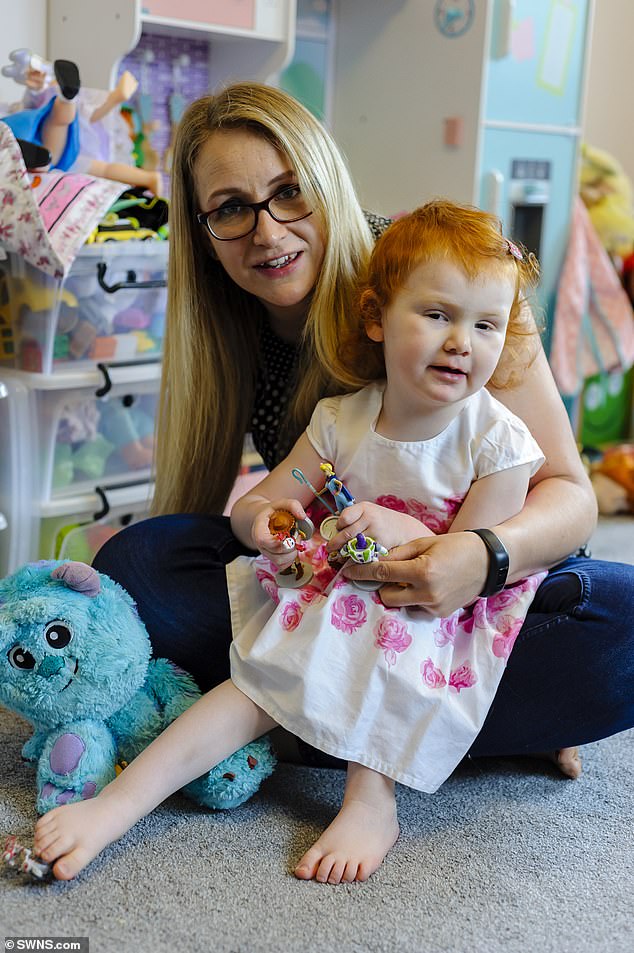 Even though the family sometimes visit the beach, it is unlikely they will ever go on a holiday abroad due to the sensitivity of Rhiannon’s eyes to the sun 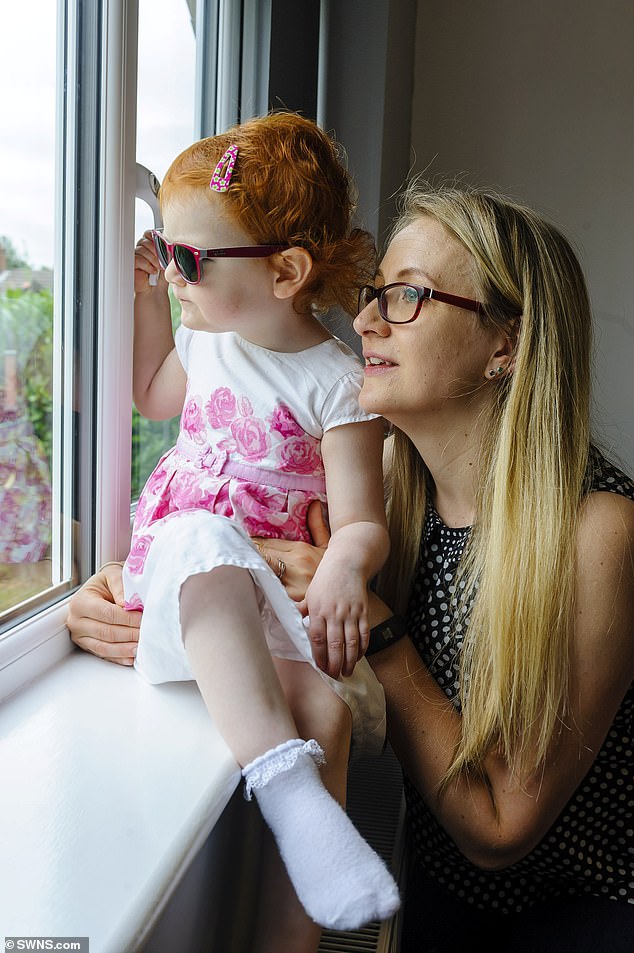 Mrs Kay said the family have received hurtful comments, and people have even said her sunglasses – which she also wears in the winter – remind them of Elton John 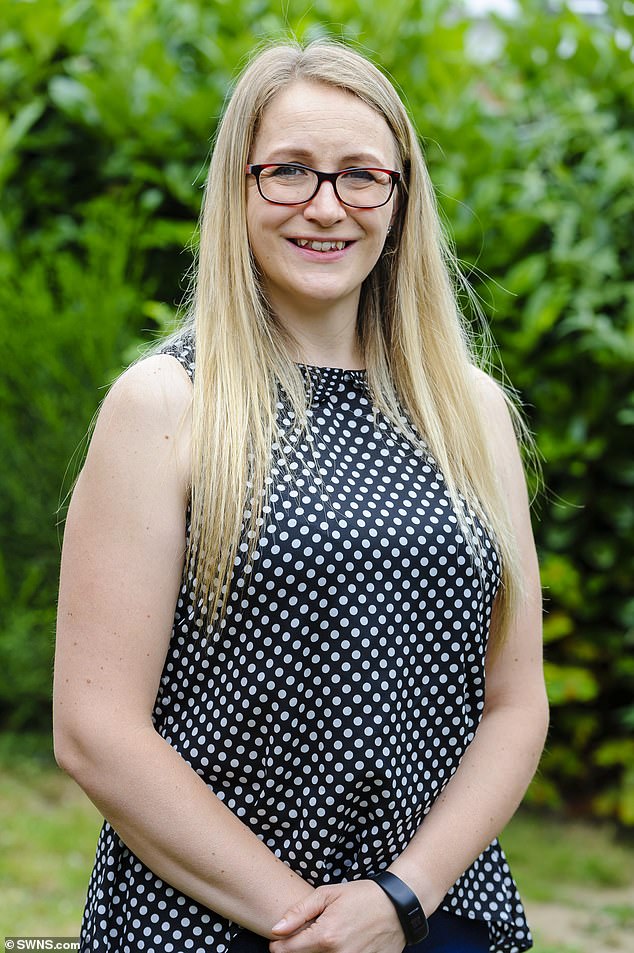 Mrs Kay (pictured) and her husband, Vaughan, 38, do a number of fundraising events for charities and to raise awareness of their daughters’ condition 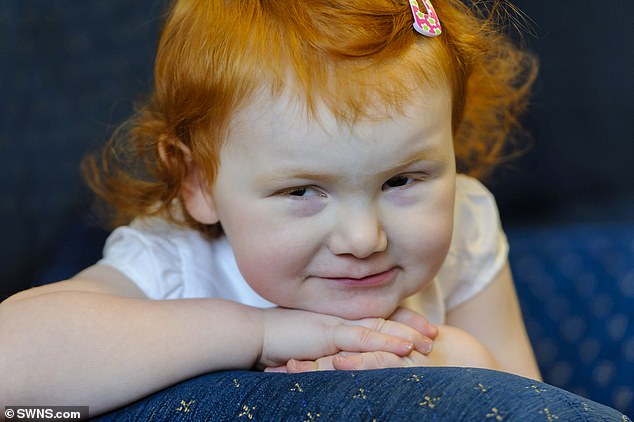 Mr and Mrs Kay have been told Rhiannon could get kidney cancer later in life, caused by aniridia

As aniridia develops with age, it could cause glaucoma and the lens and cornea to become cloudy or painful, further reducing vision.

Mr and Mrs Kay were also told the condition could cause kidney cancer, which was a huge shock to them when their child was so young.

According to VisionAware, around 30 per cent of people with sporadic aniridia – which is not inherited from either parent – can have WAGR syndrome.

This is a group of conditions which include Wilms tumour – a rare kidney cancer. Aniridia is often the first sign.

Mrs Kay said: ‘It was terrifying because we didn’t know whether she was going to get cancer. You’re supposed to be enjoying this time with your baby but we were terrified.’

Rhiannon’s condition has prompted some cruel comments from passer-by who walk past and see the toddler wearing shades in the winter.

According to Mrs Kay, some people are baffled by the sight while others compare her to the musician Elton John.

Mrs Kay said: ‘We do get comments, some just see a girl getting ready for summer in winter and some people say: “Oh they look really cool”.

‘Even when she was a tiny baby people would say things like: “Why on Earth are you putting those on her?”

‘It is just people making comments every single day. Some are just normal glasses but some are opticians glasses with tinted lenses but even then we get comments.

‘Mostly I just bite my tongue but sometimes we will tell them the reason.

‘It’s just about trying to change those sort of things people say because the comments can be thoughtless and cruel. It can be really hurtful.’

The family refuse to let the comments affect their happy little girl who Mrs Kay described as ‘full of life.’

Despite the fact that the family can’t go abroad on a summer beach holiday, Mrs Kay said she would never want her daughter to miss out on anything.

She said: ‘We would not go on a beach holiday because of the sun and the glare on the sea and sand but we go to our local beach.

‘We never want to stop her from doing something, we just have to make adaptions.

In a bid to raise awareness of the rare condition and to also raise some money, the couple have got a number of fundraising events lined up.

They have already competed in the Tour De Broads 100-mile route in May and the Norwich Cycle Swarm’s 70 miles on July 7, raising over a grand.

They’ve got another 100-mile route on August 18, and the overnight Dusk Til Dawn 12-hour Mountain Bike Night Race in October.

To donate to their fundraising, visit here.

Aniridia is a genetic eye disorder where the iris (colored ring structure of the eye that forms the pupil) is malformed.

In some cases, other structures of the eye are also poorly developed. The word aniridia implies that there is ‘no iris’ but, in fact, there is a small ring of iris tissue present that is variable in size.

Because the iris tissue is so small, the pupil is very large and may be irregularly shaped

Aniridia occurs while the eye is developing during the 12th to 14th week of pregnancy due a chromosomal mutation.

Patients can range between having very good vision (20/30 or better) to very poor vision (worse than 20/200), and most patients are somewhere in between.

An ophthalmologist will assess vision, perform an examination, and prescribe glasses if necessary.

If no prescription is needed, patients often still benefit from wearing filter lenses or sunglasses to help with glare and sensitivity to light (common symptoms associated with the large pupils and corneal changes).