A mother has revealed she spends at least two hours every day bathing her ten-month-old to treat a rare condition that causes her daughter’s skin to grow up to 10 times faster than normal.

Carla Brown, 53, and her husband Paul, 55, from Chicago, adopted Hanna Rose, who was born with harlequin ichthyosis, a rare condition which causes thick plates to cover the body, in June 2020.

Within two weeks of returning home, Hanna was rushed to ICU with a bacterial infection and doctors warned Carla and Paul she wouldn’t survive.

Despite the mortality rate for children with the condition being fifty percent for children under the age of one, Hanna defied the odds and returned to her family after 53 days in hospital.

But Carla said caring for her daughter at home can also be ‘exhausting’ at times, saying: ‘She needs an hour-long bath twice per day and then has to be covered in skin care ointments every three hours day and night to sooth her dry, blistering skin.’

Carla Brown, 53, and husband Paul, 55, from Chicago, adopted Hanna Rose, now ten months, who has harlequin ichthyosis which causes her skin to grow at ten times the regular rate 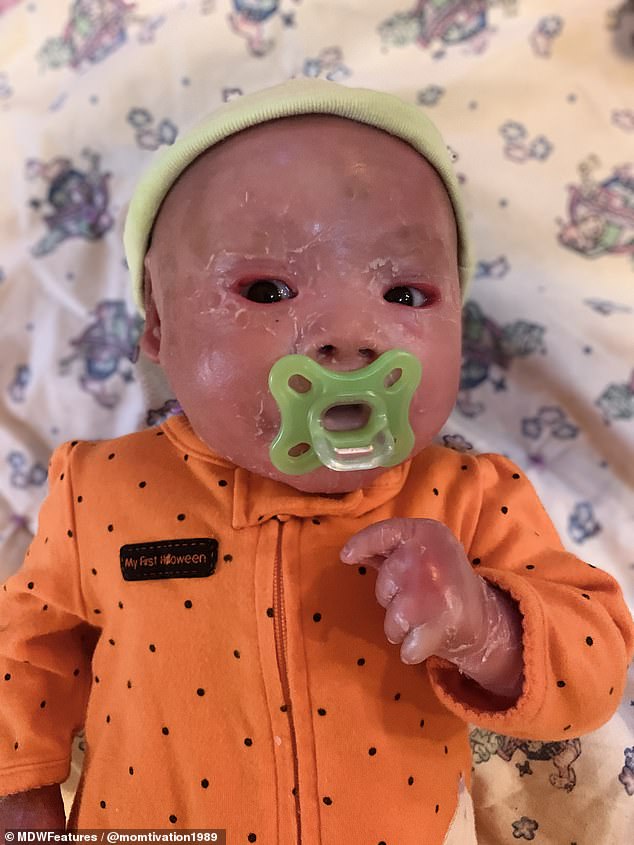 The condition is extremely rare and caused thick plates of skin to cover the body and face, and in severe cases a person’s skin can grow at a rate ten times faster than normal

When considering adopting their baby, Carla began frantically researching the condition when a friend told her of a Facebook page of a Georgia-based adoption agency.

She said: ‘I knew it would be a challenge, but if anyone has the experience to cope with cases of severe special needs, it’s us.

‘I also saw the amazing people with the condition who had gone to do great things – like Mui Thomas from Hong Kong who became a rugby referee, which I thought was wonderful.’

She said to her husband that they’ve ‘found their girl’ and the couple drove to Atlanta to pick up Hanna when she was one month old. 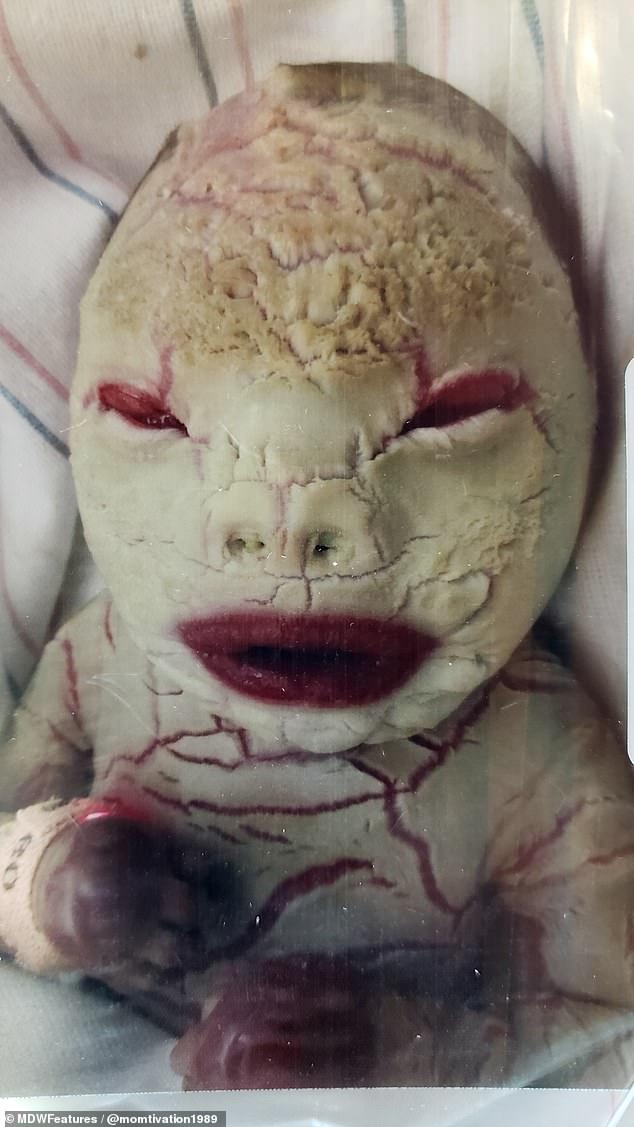 Babies with the condition are covered in thick plate-like scales of skin. The tightness of the skin pulls around the eyes and the mouth, forcing the eyelids and lips to turn inside out

Shocking pictures of Hanna while she was in hospital show how his tight skin caused his eyelids and lips to turn inside out.

WHAT IS HARLEQUIN ICHTHYOSIS?

Harlequin ichthyosis is a severe genetic disorder that mainly affects the skin.

It is unclear how many people suffer from it.

Babies born with the condition have very hard, thick skin covering most of their bodies.

Restricted movement of the chest can lead to breathing difficulties and respiratory failure.

Most sufferers die from infections within the first few weeks of life.

This is due to the skin normally forming a protective barrier between the body and the outside environment.

Skin abnormalities in Harlequin ichthyosis disrupt this barrier, which also makes it harder for patients to regulate their temperature and control water loss.

There is no cure, however, moisturisers help to keep patients’ skin soft, while antibiotics fight any infections.

However weeks after the adoption, Hanna was rushed back into hospital with an infection.

Doctors said they didn’t expect her to live past the first 48 hours in hospital after her kidneys shut down and her temperature dropped to 32.7 degrees Celsius.

Carla said her daughter’s condition is often mistaken for burns and caring for a baby with the disease is not easy.

Hanna has deformities in her fingers and toes which occurred as a result of the thick skin and is also partially deaf due to the skin in her ears shedding and blocking her ear canals.

Carla explained:  ‘Her skin is so tight that it’s currently difficult for her to roll over.

‘Her disability is very obvious, as her skin is bright red and her fingers and toes are slightly deformed.’

When in public, Carla notices strangers staring at Hanna and on one occasion, a waitress asked Carla if Hanna was a burns victim.

She said: ‘I went out to breakfast the other day and the waitress asked, “did your baby get burned?”

‘I corrected her and let her know that Hanna actually has a rare genetic condition, but these are the types of questions Hanna will get asked herself one day.

‘One child of a friend in preschool first meeting her said “I am scared of her, she looks scary”, but by the end of the visit said, “oh she is such a cute baby”.

‘I’ve talked to other mothers of children with harlequin ichthyosis and they’ve been at the park and had other children run away or point and that’s obviously going to be a challenge as she gets older.

‘But like every other challenge we’ve faced, we’re going to face it head on.’

Despite the challenges that Hanna faces and will continue to face in the future, Carla and Paul are determined for her to live as normal a life as possible. 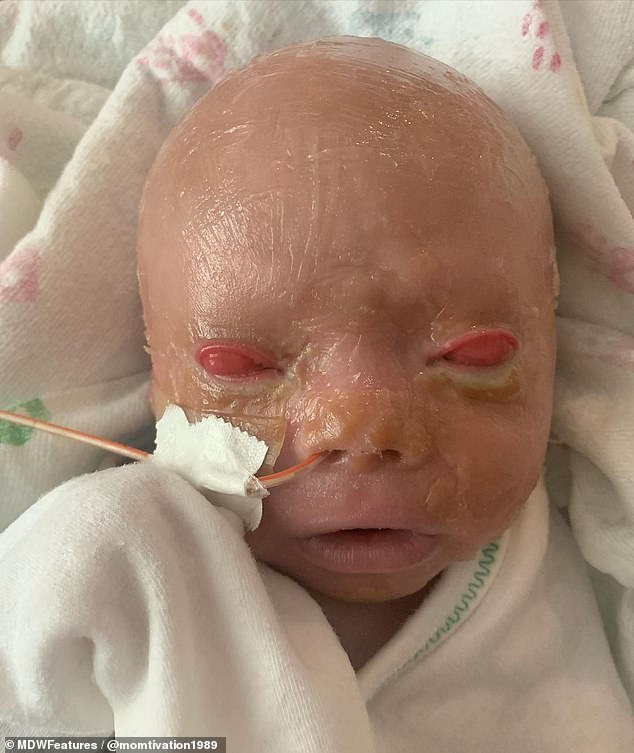 At one month old, Hanna’s eyes were fixed shut due to the hardened skin covering her face  (pictured, while in hospital) 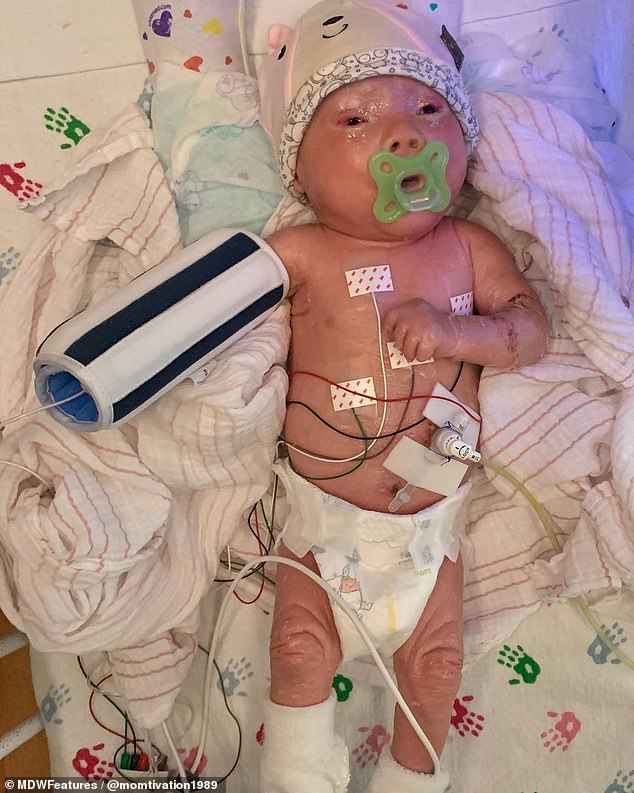 Hanna has deformities in her fingers and toes which occurred as a result of the thick skin and is also partially deaf due to the skin in her ears shedding and blocking her ear canals (pictured, at six weeks old)

The couple traveled to a Ukrainian orphanage to adopt Henry in 2011 and then three more children, Violet, 18, Leo, 10, and eight-year-old Yana in 2013.

However, tragedy struck the family when Henry contracted the superbug MRSA and died in November 2012 aged just two and a half. 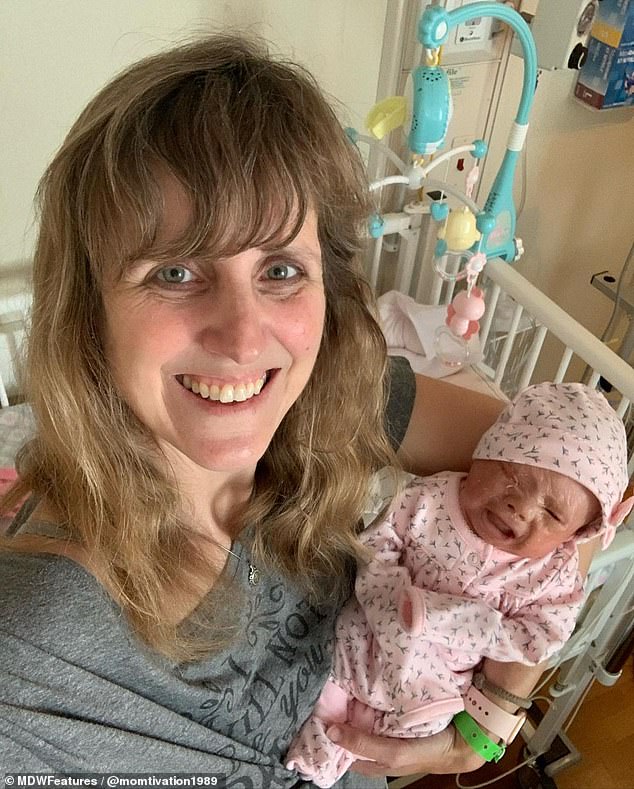 When in public, Carla notices strangers staring at Hanna and on one occasion, a waitress asked Carla if Hanna was a burns victim

They said that adopting children with special needs has been the most rewarding aspect of their lives and has even helped their own children to become more compassionate.

‘Our job as parents to all of our kids is to look at them and say what does this child need and what can we do to make them feel confident,’ said Carla.

‘I have a baby who I love being able to share with the world because I feel blessed. We choose to focus on the beauty. That’s why she’s our Hanna Rose.’ 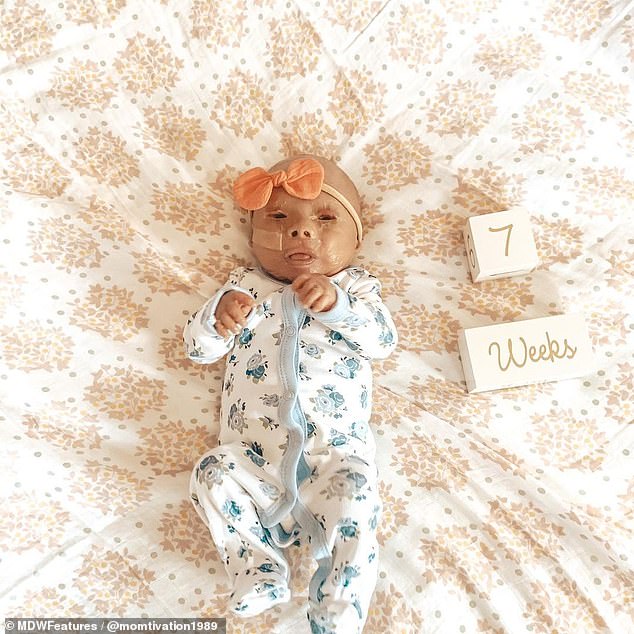 Despite the mortality rate for children with the condition being fifty percent for children under the age of one, Hanna returned to her family after 53 days in ICU following her infection