Girl, eight, faces race against time to avoid being sold for 50 sheep

A young Bedouin girl who wants to become a doctor is facing a race against time to avoid being sold as a child bride for 50 sheep soon after she starts her periods.

Zakura, now eight, has the support of her father who wants her to avoid the preordained female fate for 11 or 12 year olds in his traditional and partly nomadic society in Wadi Qelt valley on the Israel-Palestine border – but this may not be enough.

A young Moscow documentary-maker is this week seeking a British producer at the Russian Film Week in London to tell her unfolding story in a feature length documentary.

Zakura, pictured aged eight, is facing a race against time to avoid a traditional Bedouin fate in her region of being sold for marriage soon after she starts her periods 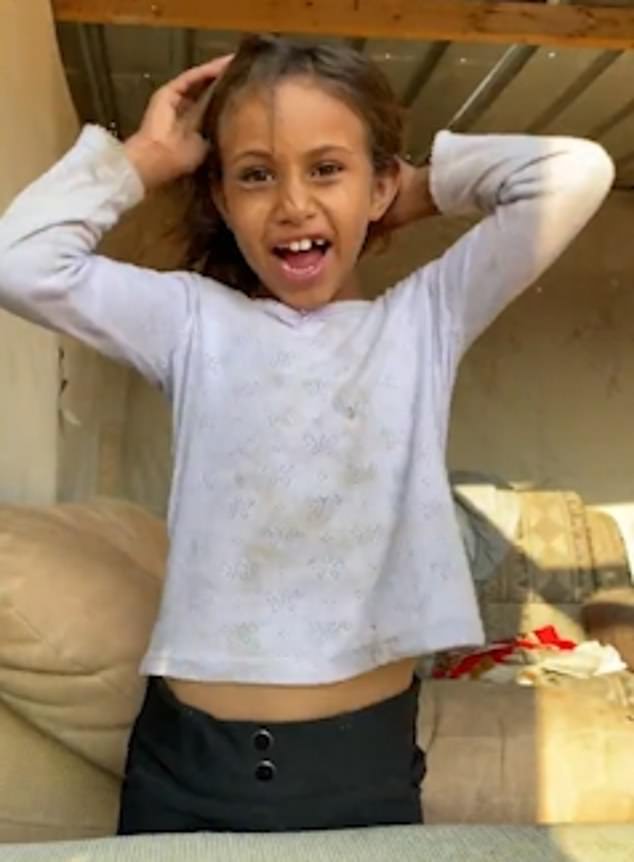 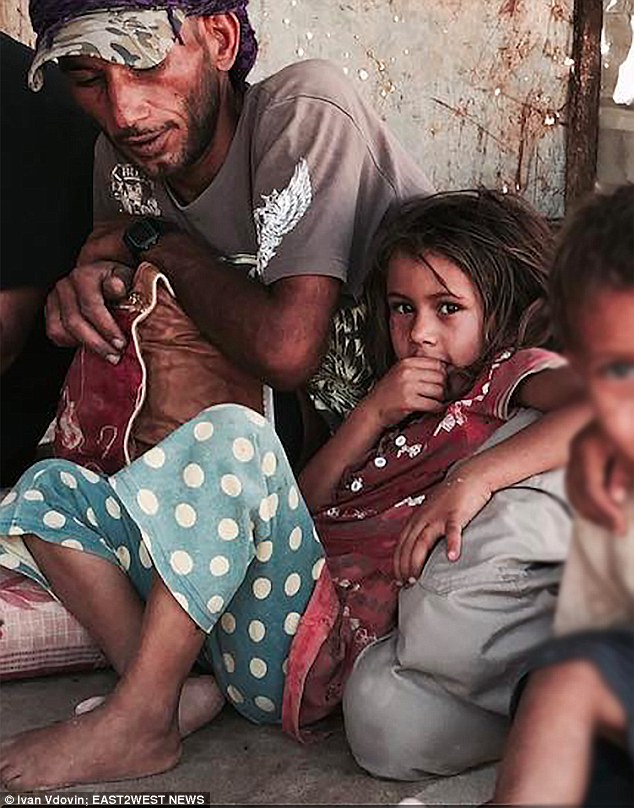 Zakura is pictured three years ago sitting with her father, Arafat, and her brothers in Wadi Qelt on the Israel-Palestine border

Ivan Vdovin, 28, who has charted the girl’s life told how MailOnline’s previous report about Zakura inspired ‘loving father’ Arafat to believe he is ‘part of a big world’ and that his daughter really could have the choice of a life with wider horizons.

But the filmmaker also acknowledges that severe pressures will be brought to bear on her father – and mother – to conform to strict Bedouin ways over his daughter’s future.

There is already a ‘candidate’ to be her husband – Omar, her cousin, a 14-year-old shepherd, but there could be pressure to marry her to a much older man, possibly as a second wife. 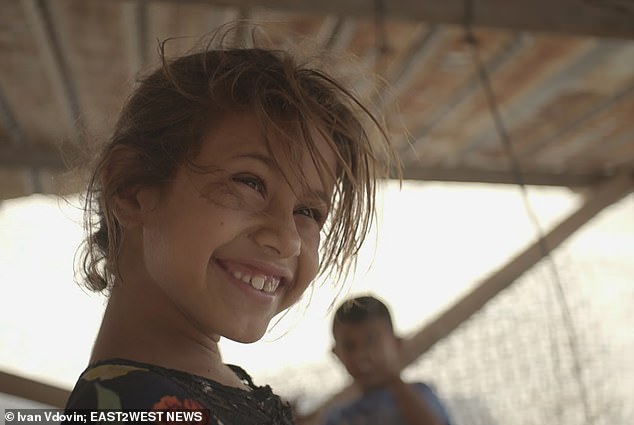 Zakura, pictured this year, could be sold as a child bride for 50 sheep when she reaches the age of 11 or 12 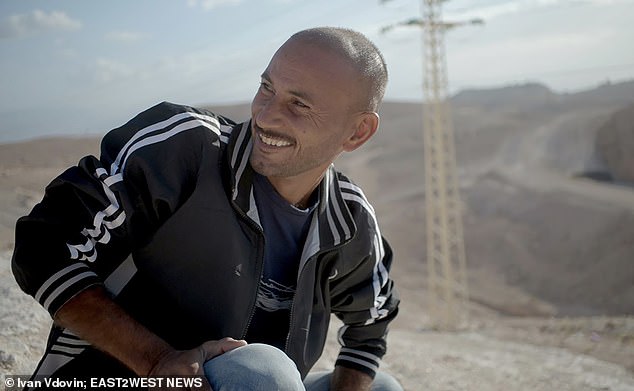 Documentary maker Ivan Vdovin, 28, has said how MailOnline’s previous article about the youngster inspired her father, Arafat, pictured this year, to believe he is part of a wider world 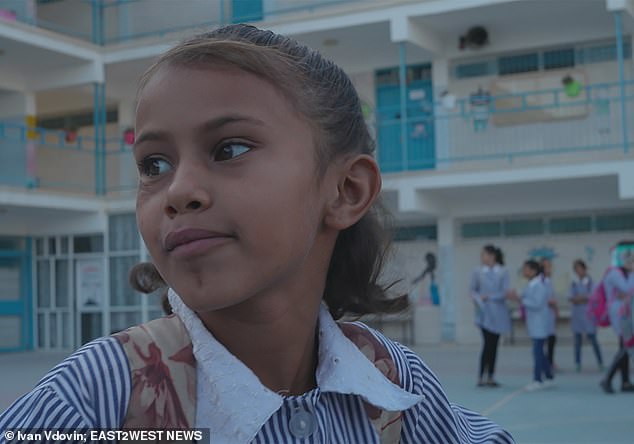 Zakura, pictured at a UN school in Jericho, already has a suitor lined up for marriage. The candidate is her 14-year-old cousin Omar who works as a shepherd 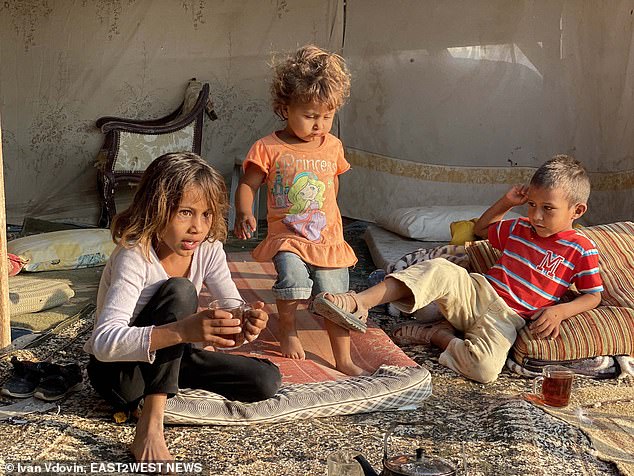 Her father added there is a risk that Zakura, pictured left with her siblings this year, could be betrothed to a much older man, possibly as a second wife

For now Zakura – first filmed when she was five – is attending at Arafat’s insistence a UN school in Jericho city to which she travels daily from her desert home in Wadi Kelt.

‘When we asked her what she wants to be when she’s older, she confidently said a doctor,’ said Vdovin.

‘For now this sounds unreal, because a medical education is among the most expensive in Israel and Palestine – but this is her dream.’ 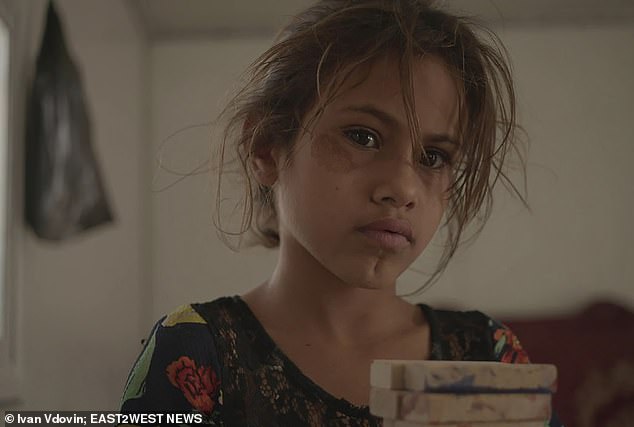 Vdovin first began filming Zakura, pictured aged eight, when she was five years old. She now attends a UN school in Jericho at her father’s insistence 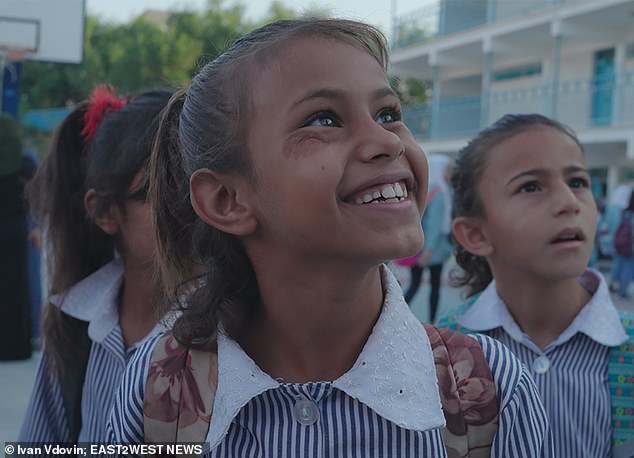 When Vdovin first met Zakura, pictured at the school, he said he recognised she was an ‘outstandingly charismatic and gifted child’ 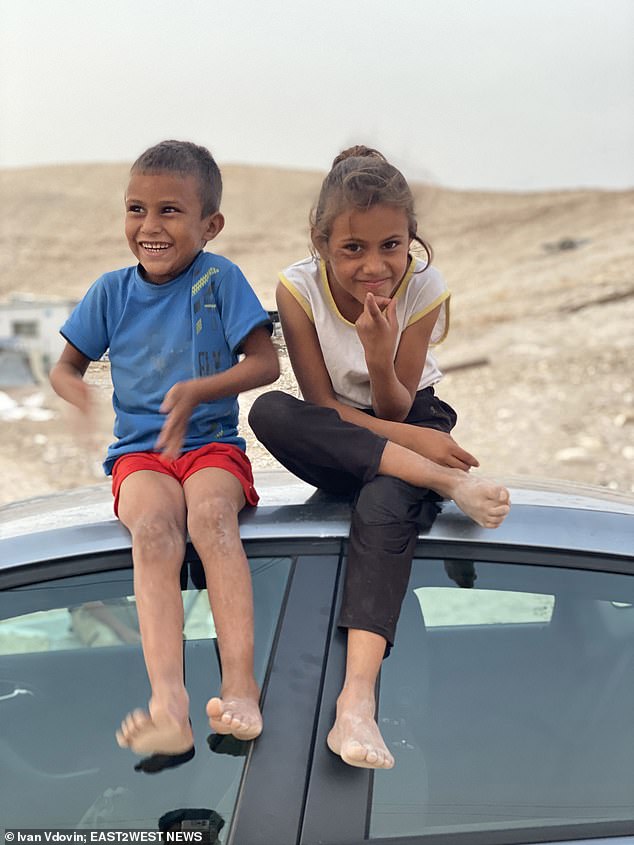 Arafat offered for the filmmaker to take Zakura, pictured here with her brother, and raise her in Moscow and even marry her when she reached 12. The documentary-maker politely declined

As she grows up she is a ‘born leader, bravely orchestrating a small group of kids in her Bedouin settlement’ while at school she is ‘quiet and calm’, and a fast learner.

When Vdovin first met Zakura ‘it was clear to me that was an outstandingly charismatic and gifted child’.

He feels that ‘despite severity of traditions in her society, her education and Zakura’s personal goals can really affect her future’. 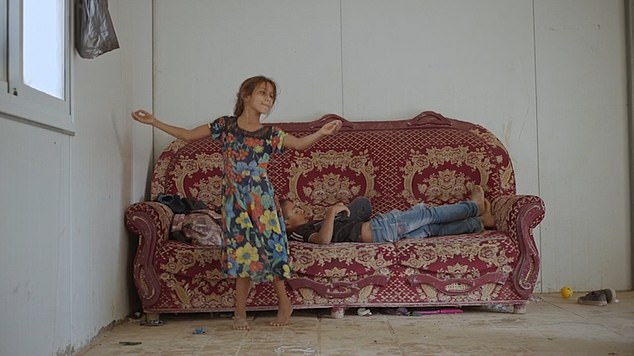 Vdovin feels that Zakura’s, pictured this year, ‘personal goals can really affect her future,’ despite her society’s traditions 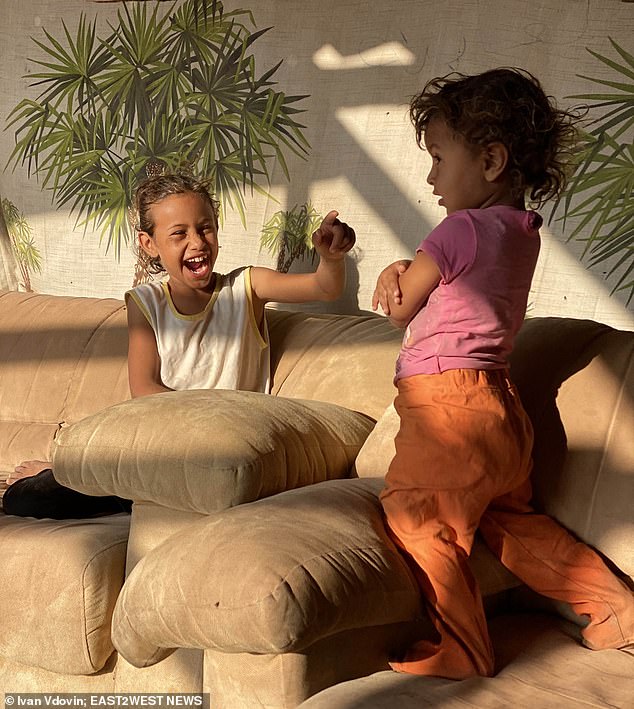 The filmmaker said he is driven by a desire to see Zakura, pictured left with her sibling, achieve her dreams

He said: ‘When we met and started talking about his daughter’s future, and then MailOnline and other media shared Zakura’s story, it had a big impact on him.

‘He realised he was a part of big world.

‘He dreamed of travelling to different countries, to see other lifestyles.

‘But unfortunately, these are dreams now. 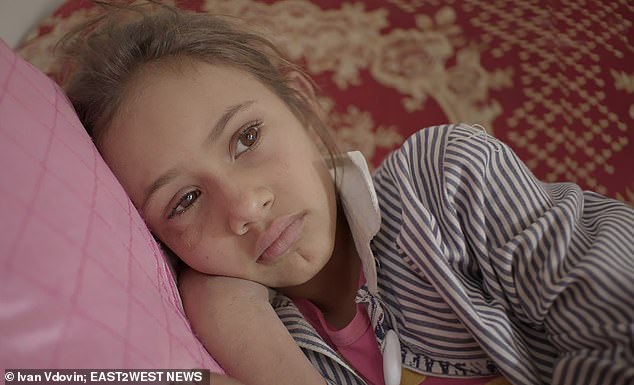 Arafat explained to Vdovin when Zakura, pictured here after school, was five that her future in Wadi Qelt is ‘pre-determined’ 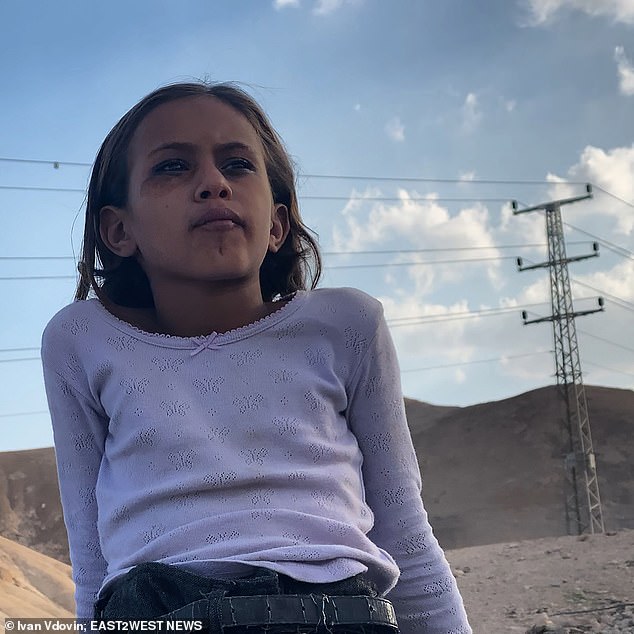 Vdovin said that in a few years his communication with the schoolgirl, pictured this year, will be prohibited

‘In this sense his desire to travel is similar to his desire not to marry Zakura off at an early age.

‘In his dreams, she would be a free individual but in reality will anything change?

‘I personally expect that after the documentary is released, Arafat will become convinced that Zakura truly can have a choice.’

Yet he knows the critical time for this girl is not a long way off, and the stakes are high due far more to tribal traditions than their Muslim religion.

‘She is still a child and there are no barriers yet, she can talk to anyone she wants,’ he said.

‘But my communication with her is possible only now, while she’s a child, not a potential bride….

‘In three or four years Zakura will be banned from talking to me and other men.

‘Punishment can be anything, even murder.’

Should he be trying to change her destiny?

‘I see my aim as to tell her story, to attract attention to it and to try to make life of at least one little girl better.

‘But we are still very far from the desired result.’

The father – who was Vdovin’s guide and fixer on a previous unrelated filming trip – offered the Russian the chance to take his daughter and raise her in Moscow, and even marry her when she reached 12, which the documentary-maker politely declined.

His motivation was his love for the girl – then aged five and now eight – and desire to see her raised in a society where she can fulfil her potential, said the filmmaker.

He explained to Vdovin when Zakura was five: ‘Her future here is pre-determined, she’s free now but she will soon become someone’s property.

‘I love her as a father but I see no opportunity that I can break our local traditions.

‘You are a good man and most likely she will have a chance for normal education and life in a different country.’

‘I refused the deal but I offered him to make a movie about him and his daughter, because it is absolutely normal to love your child and want a better future for them.

‘He was very enthusiastic about it.’

Vdovin was sure that the father’s motive – having glimpsed the outside world on YouTube and through meetings with foreigners – was to want the best for his intelligent and inquisitive child, knowing this was hard if not impossible in his own society.

So far the Russian has raised money for his project from his personal savings and crowdfunding.

But he hopes this week for to find a backer for a major documentary at Russian Film Week in London.