Girl gained 5 stone in 5 months due to hidden tumour

A history graduate baffled doctors when she gained five stone in just five months and was left covered in stretch marks with skin so thin it rips.

Amy Bojar became extremely bloated during the final year of her degree and also noticed her legs felt very weak.

The 25-year-old then quickly ballooned from a size 12 to a 20 and her hands, elbows, knees and ankles swelled to ‘the size of large oranges’.

Mrs Bojar also began losing her hair and developed bruising all over her body.

She was eventually diagnosed with a hormonal condition she describes as ‘every girl’s worst nightmare’.

A scan revealed she had a 5mm tumour on her pituitary gland and she was diagnosed with Cushing’s syndrome – which made her levels of the hormone cortisol 800 times higher than the average person.

Although tiny, the growth was potentially fatal and Mrs Bojar had surgery after being told she may not live through the rest of the year.

Amy Bojar, pictured here with her now husband Daniel Bojar, very quickly ballooned from a size 12 to a 20 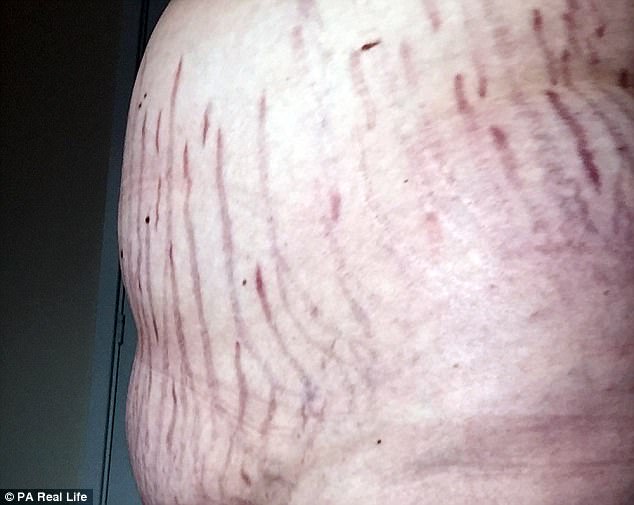 The history graduate, from Pontefract, pictured here before her dramatic weight gain

Mrs Bojar,from Pontefract in West Yorkshire, said ‘Now I have stretch marks on my arms, sides and legs. My skin is so weak it’s tearing. I have bruising on my arm simply from putting my handbag on my shoulder. I struggle to heal and I have brittle bones.

‘I fractured my scapula, or shoulder blade, in three different places just washing my hair. I have weight gain, memory loss and so many other problems.

‘It’s every girl’s worst nightmare and it’s so often misdiagnosed, or too embarrassing to talk about. I would hate for anyone to go through what I have been through.’

Mrs Bojar began experiencing her first symptoms in July 2012 while she was studying at York St John University.

The part-time carer was shocked her legs felt weak despite walking for miles every day to visit clients.

When her mother Jayne Barton, 52, spotted the angry red marks appearing all over her daughter’s legs she convinced Mrs Bojar to go visit a nurse.

‘I was still only a size 12 then and the nurse said it wasn’t normal to have such vivid stretch marks, yet no weight around the middle,’ she said. ‘Concerned, she made me see the GP.’ 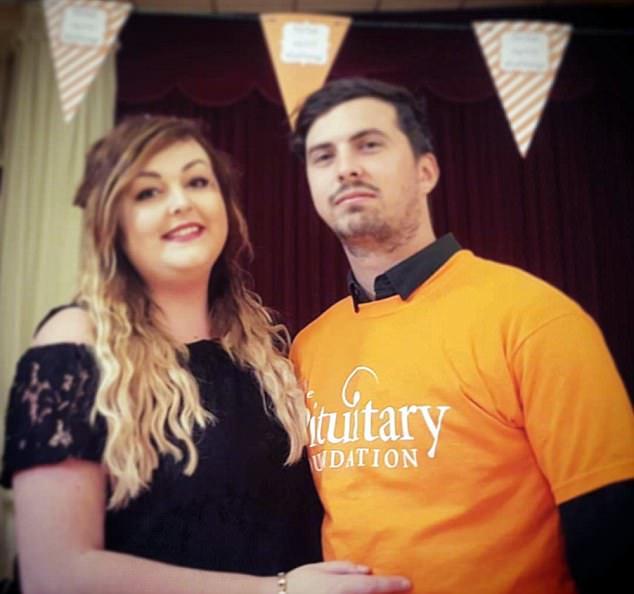 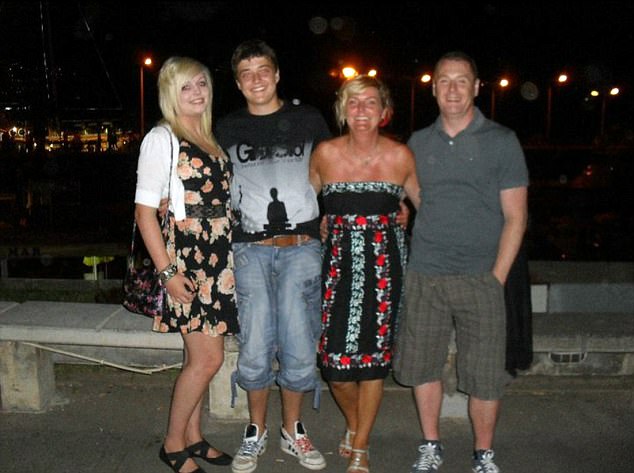 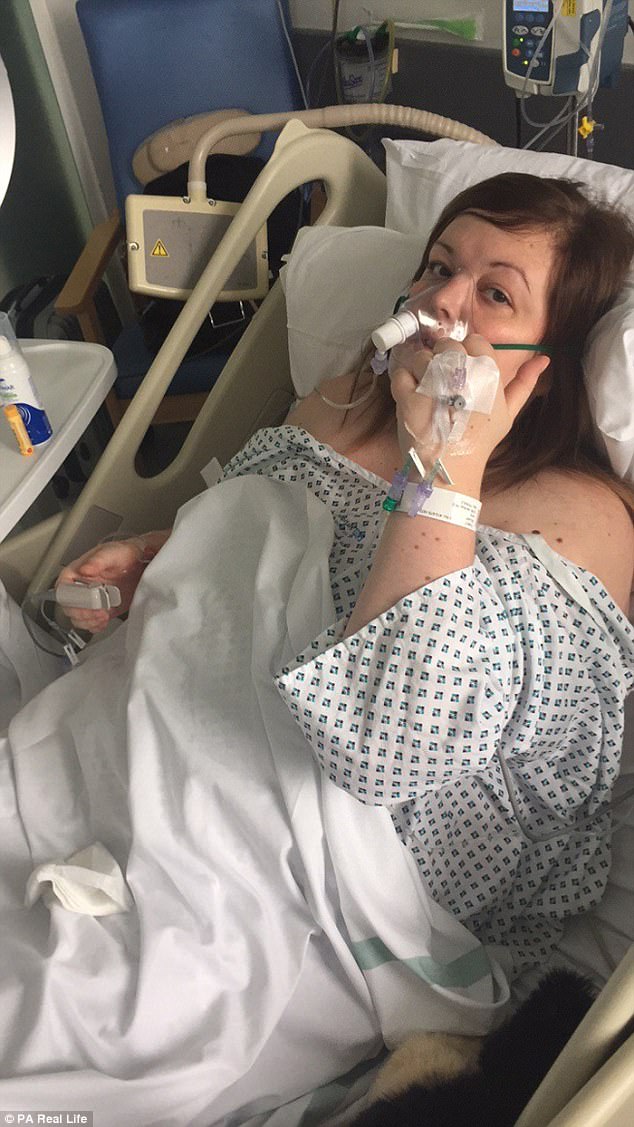 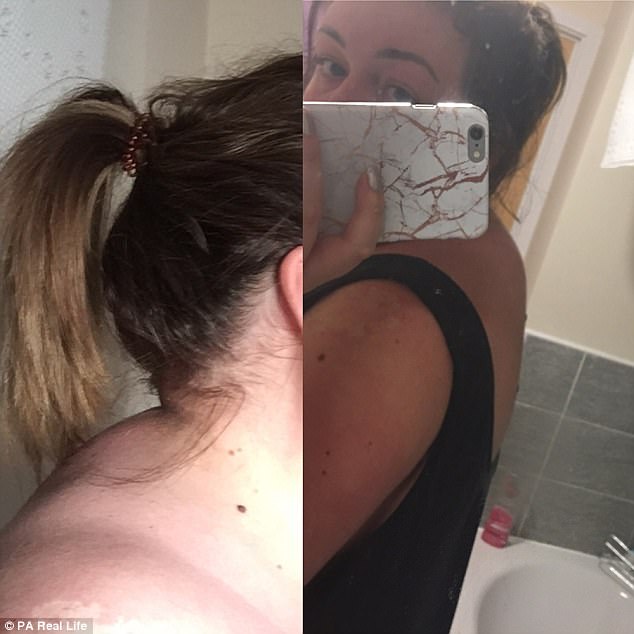 Her hands, elbows, knees and ankles also swelled to ‘the size of large oranges’

WHAT IS CUSHING’S SYNDROME?

Cushing’s syndrome is a collection of symptoms that develop due to very high levels of a hormone called cortisol.

The condition often develops as a side effect of treatments for inflammation and autoimmune conditions.

It can also develop as a result of a tumour inside one of the body’s glands.

The main treatment is to stop taking the medication that is causing it or to remove the tumour.

If these options are not available, medication can be used to counter the effects of high cortisol levels.

If left untreated, it can cause high blood pressure which can lead to heart attacks and strokes.

Recognising the symptoms of Cushing’s syndrome –  which affects the metabolism and immune response – her doctor referred her to a hospital specialist.

She said: ‘I was a student when I first started having problems, so I was eating pretty cheaply and, as I didn’t have a car, I would walk everywhere for work.

‘But I was really bloated and soon I noticed some really strange, vivid stretch marks. I had a flat stomach, so I couldn’t understand why they were there.

‘When the GP said he thought I had Cushing’s syndrome, I had no idea it would go on to be the bane of my life.

‘I was told not to Google it, a but I did and felt quite relieved, as I had all the symptoms and wasn’t going crazy.’

At the hospital, Mrs Bojar had everything from urine to saliva tests, but her health continued to deteriorate – while her weight carried on rising.

She said: ‘My diet was pretty good, but my face and middle just kept ballooning, while my arms and legs were turning into sticks.’ 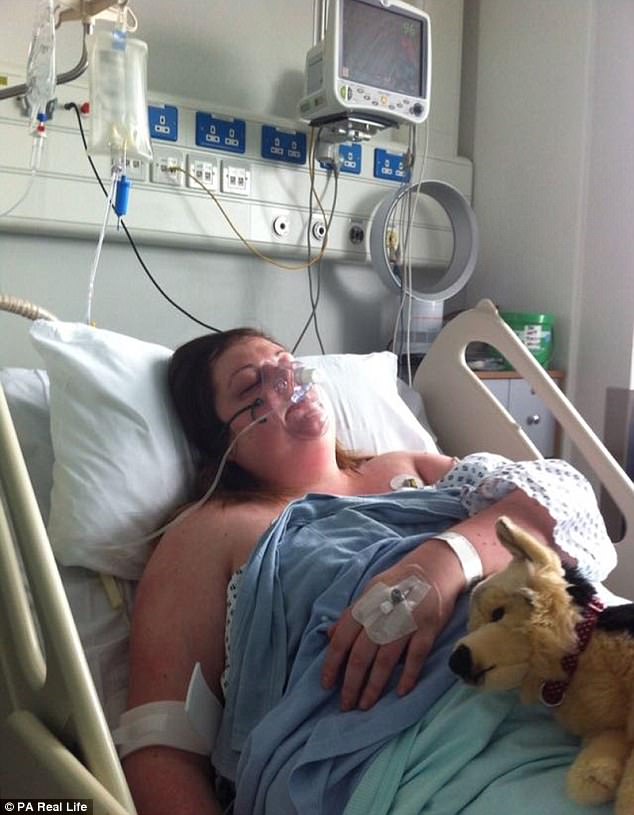 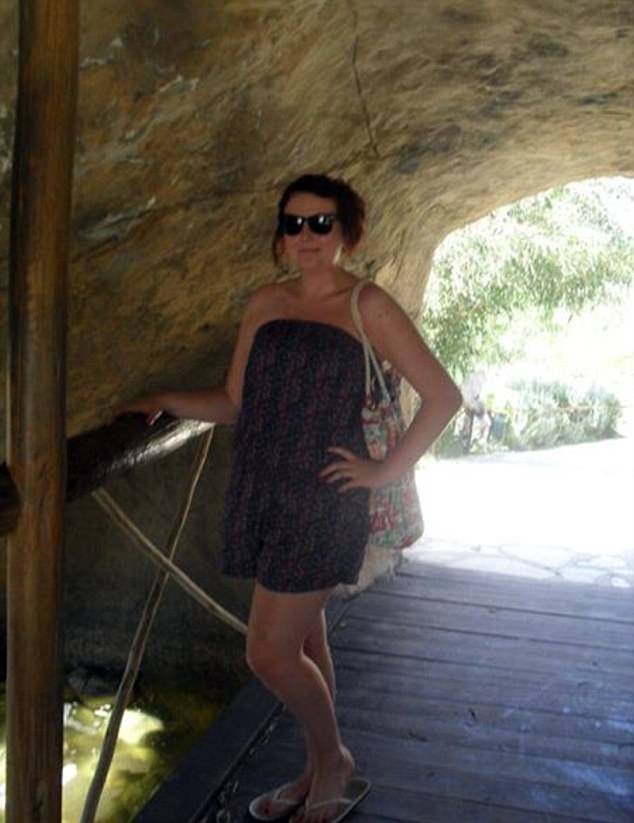 Then, in early 2013, transferred to Sheffield’s Royal Hallamshire Hospital, she saw John Newell-Price, a world expert on Cushing’s, who confirmed that she had the condition.

Fortunately, a year after her symptoms began, her health started improving.

She explained: ‘I was losing weight, my legs were getting stronger and I felt a lot more normal.

‘Eventually, everything seemed to settle down. I wasn’t 100 per cent well, but I felt amazing compared to the hell I went through in the previous months.

‘I returned to uni in September, and in February 2014, I moved to Huddersfield to be with my boyfriend Daniel who I’d met in a bar.’

Then, in May 2014, her consultant discharged her from his care, attributing her Cushing’s-like symptoms to taking the mini contraceptive pill.

Crying with happiness, she was delighted to have her life back – starting her first full-time job in June 2014, as a legal recruitment consultant.

‘I saw my consultant in May 2014 and he discharged me from his care and put the “cushingoid” appearance and symptoms down to taking the mini pill. I was over the moon, I cried with happiness and genuinely felt like my old self,’ she said.

But, Mrs Bojar, who married Daniel, 27, at Wentbridge House in Pontefract in February 2015, was on a family holiday that July in Kos in Greece, when she began noticing some of the old symptoms returning.

She said: ‘My face was getting bigger, dresses I’d bought a few weeks before the holiday wouldn’t fit and I was struggling to walk to and from the beach.

‘I was having horrendous joint pain, too. I would watch as my hands, elbows knees and ankles swelled to size of large oranges. I sort of put this down to the heat and I was covered in bites, so that could have caused swelling.’ 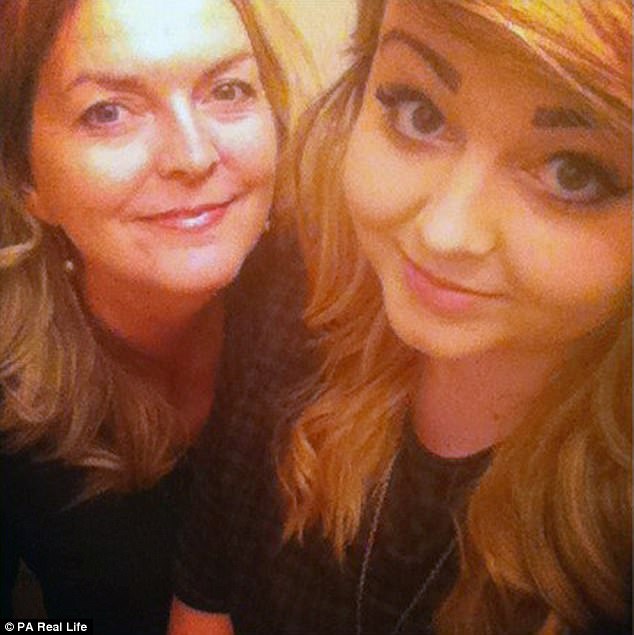 Returning from holiday, her symptoms, which now included hair loss, brain fog, weight gain, insomnia and bruising over her body, continued but, frightened about what they meant, initially she ignored them.

Also suffering from polycystic ovary syndrome and endometriosis – both gynaecological conditions unconnected to Cushing’s –she was advised that they could only be treated by having injections to create an early menopause.

While the injections helped solve her abdominal pain, she noticed her joints becoming more painful and, visiting her GP, a simple test showed that her cortisol was dangerously high.

She said: ‘The GP put me on “red alert”. He did loads of blood tests and suggested a referral to an endocrinologist, or hormone specialist, again.

‘My doctor also asked for some urine tests and two days before my appointment with the endocrinologist, in October, he phoned to say my cortisol levels were 800 times higher than the average person, urging me to go to endocrinology asap, suspecting I had Cushing’s.’

After more tests, in April 2017, doctors finally confirmed that Mrs Bojar, had a 5mm tumour on her pituitary gland, at the base of her brain, meaning she had cyclical Cushing’s disease, where the levels of cortisol rise and fall in the blood.

‘At least the diagnosis meant I wasn’t going mad,’ she said. ‘I actually went out for a celebratory meal with my mum, because it had been going on for so long.’

Then, in May last year, Mrs Bojar had a three-and-a-half hour operation at the Royal Hallamshire to remove the tumour from her brain.

‘I was terrified, but I didn’t have a choice,’ she said. ‘I wanted to start my life again.

‘If I didn’t have the surgery, the likelihood of dying by the end of the year was pretty high.

‘There was a chance having the surgery could have killed me, due to the location of the tumour. If the surgeon had gone even 0.5mm to a certain side, I could come out unable to speak and paralysed from the neck down.’ 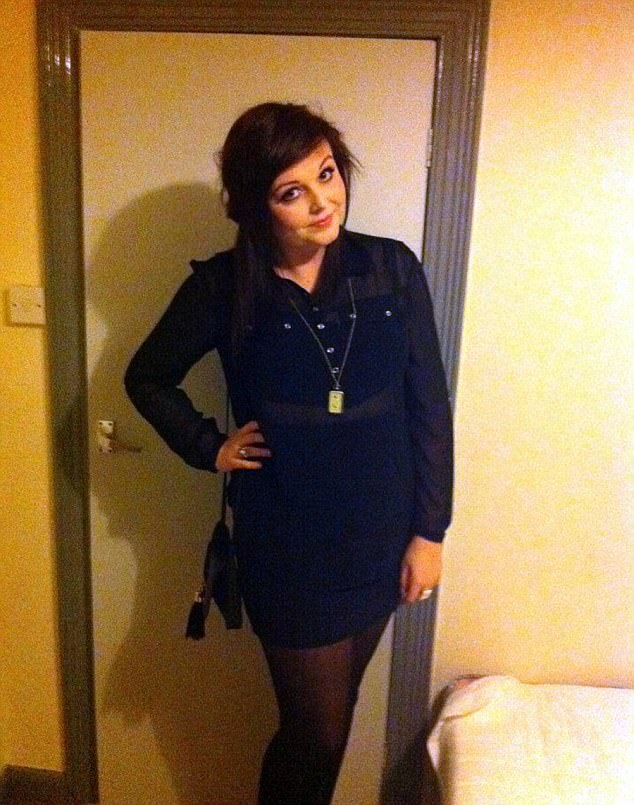 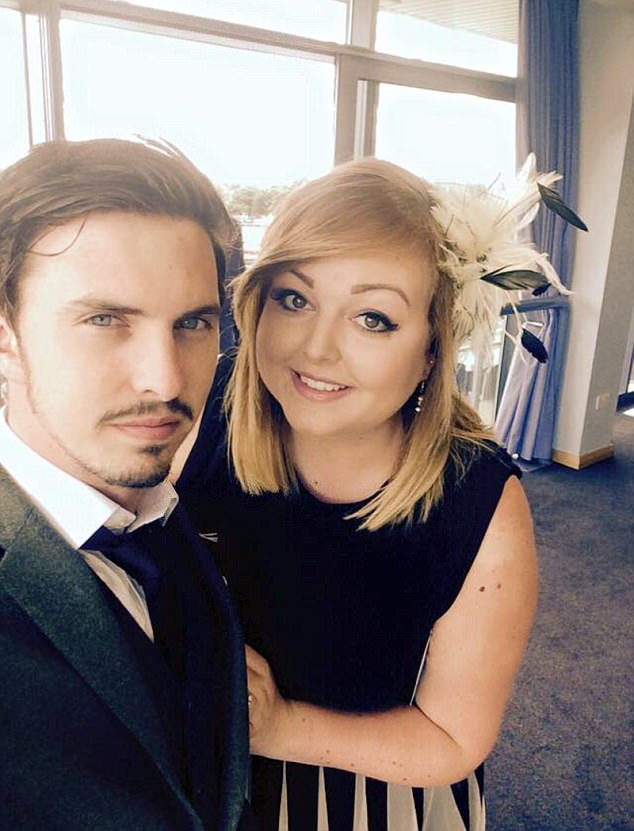 Despite her illness, she found happiness and married Daniel, 27, in February 2015

After four days in hospital, Mrs Bojar was released and quickly started to notice the difference.

She said: ‘I started to lose weight and I’ve now lost a stone and a half, making me far more confident.

‘I have had some complications with other hormones and the effects of having Cushing’s for so long.

‘My mobility is still appallingly bad, but I feel like I’ve been reborn in a way – I thought I was going to die, so I’m happy I’m here and I do think it’s changed me as a person.’

Amy still has a long journey ahead of her and fears her gynaecological problems may have affected her fertility but, now working as an ambassador for the Pituitary Foundation, she feels positive about the future.

She said: ‘I’m currently having fertility tests and the Cushing’s has changed the shape of my brain, so I find that I can’t retain information very well.

‘But, I’m determined to make the most of my future, it may not be the path I wanted to go down a few years ago and my life has dramatically changed but I’m staying positive.’