Commanding attention in a bright orange top, Melanie combined the neon number with blue bottoms while Geri opted for an all-white ensemble.

Having swapped her eye-popping top for a white vest, the Liverpool-native beamed from ear-to-ear as she posed alongside the redhead from the stands.

Melanie soon flashed a peace sign as she and Geri posed for a gorgeous selfie, which was posted to Instagram by the Watford-native alongside the caption: ‘At the final! @lionesses !’

It follows reports that Geri parted ways with her PR firm ahead of a rumoured Spice Girls tour next year. 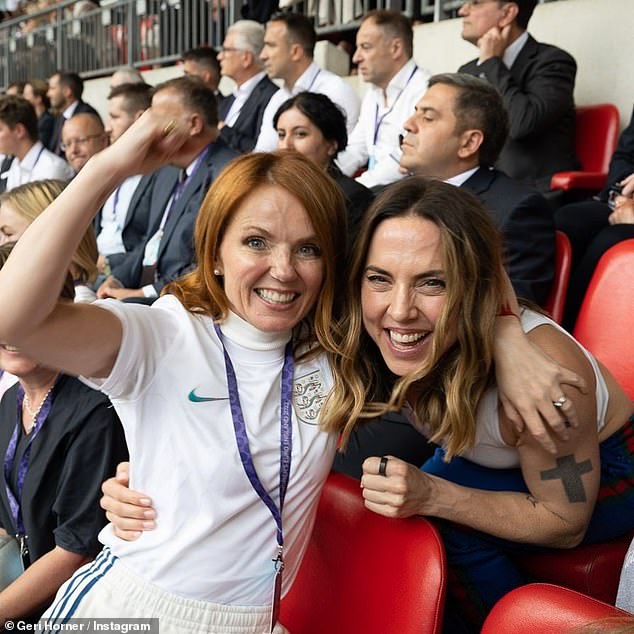 Pals: Having swapped her eye-popping top for a white vest, the Liverpool-native beamed from ear-to-ear as she posed alongside the redhead from the stands

The singer left the Outside Origination, who she has been a client of for many years, after deciding she ‘wanted a change’.

The 1990’s girl group are rumoured to be reuniting for a world tour as well as an animated movie, with Victoria Beckham even thought to be joining them after missing the band’s 2019 shows.

A source told The Sun: ‘Geri felt it was time for a change, so she has parted ways with Outside.’

However It was reported earlier this year that plans for the upcoming reunion had been delayed with Covid and Ginger Spice Geri’s busy schedule blamed. 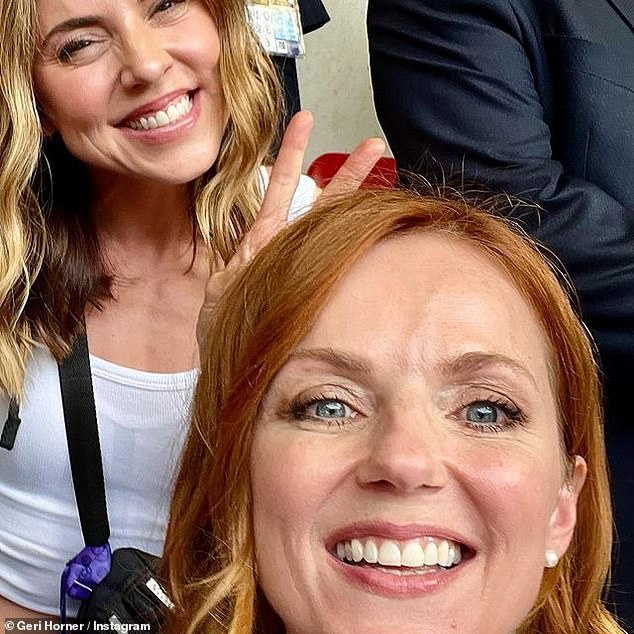 What a pair! Melanie soon flashed a peace sign as she and Geri posed for a gorgeous selfie

Having fun: It was posted to Instagram by the Watford-native alongside the caption: ‘At the final! @lionesses !’

A source told the publication: ‘A few years of lockdown and everyone’s back has turned on the group in favour of other projects’.

‘Geri is talking about new TV things, Emma [Bunton] has TV and radio work and the two Mel’s are focusing on their own stuff’.

MailOnline contacted a representative for the Spice Girls for comment at the time.

Spice Girl Mel was earlier seen wearing a royal blue Adidas tracksuit with white stripes down the side of the jacket and the trousers.

Throwback: Melanie didn’t look worlds away from her younger self in her Spice Girls days as she wore the sports attire (pictured in 1997, right)

She carried a black bag over her shoulder and flicked a victory sign with her hand as she arrived ahead of the game.

Elsewhere, Christine McGuinness put on a busty display in a low cut white halter neck top which she teamed with a pair of blue denim jeans with ripped detail as she stepped out after her split from husband Paddy McGuinness.

The model shared some inspirational words as she shared a snap of herself posing at Wembley on Instagram ahead of the game, writing: ‘Things I love to see: Women supporting women, going against the grain, doing what they love, believing in themselves, fighting for equality. 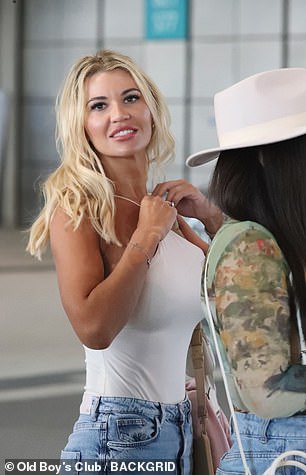 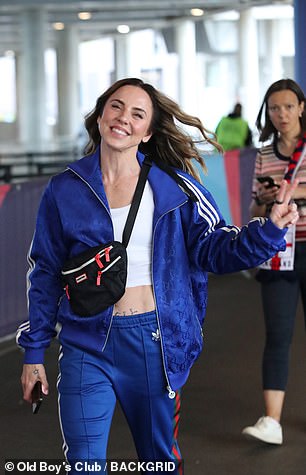 Winners! Christine McGuinness and Mel C were in good spirits as they watched the England women’s national football team triumph against Germany at Wembley Stadium on Sunday

Looking good: The former model, 34, put on a busty display in a low cut white halter neck top which she teamed with a pair of blue denim jeans with ripped detail 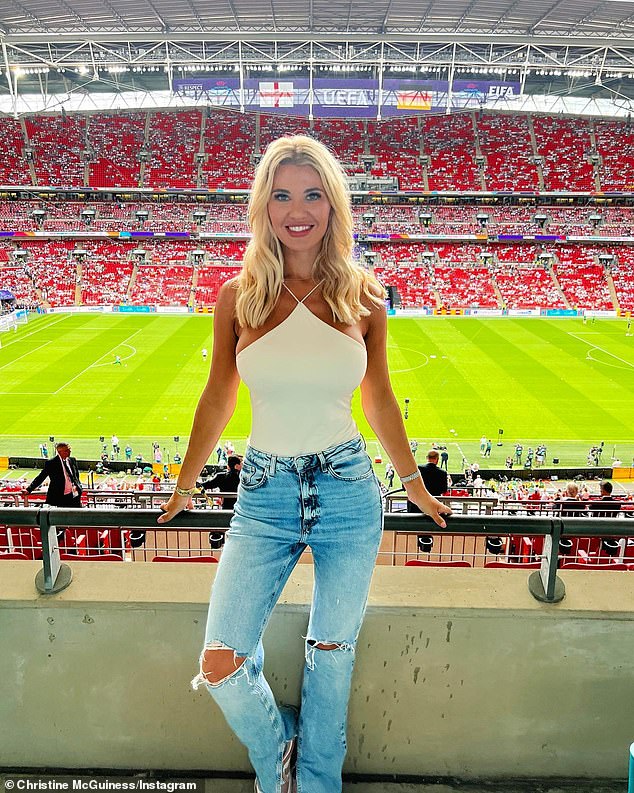 Strike a pose: Christine smiled as she posed inside the stadium out after her split from husband Paddy McGuinness

Proud: Christine shared some inspirational words as she posted her pictured from Wembley on Instagram

‘And our country getting behind them shouting: “Yes girls.”

She was seen smiling as she arrived ahead of the game, carrying a pink jacket and a white handbag with her. 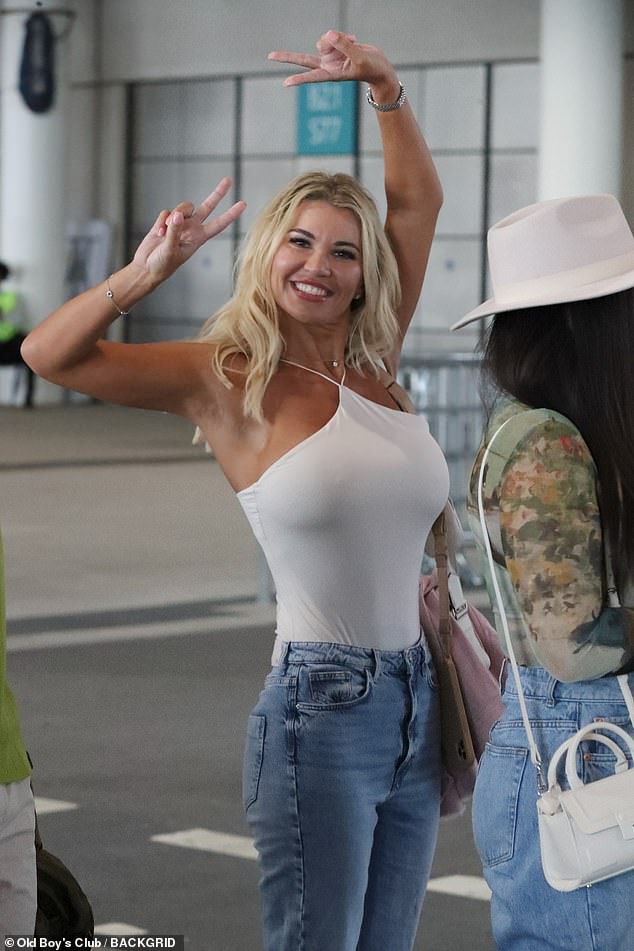 Stepping out: Christine was seen smiling as she arrived ahead of the game, carrying a pink jacket and a white handbag with her 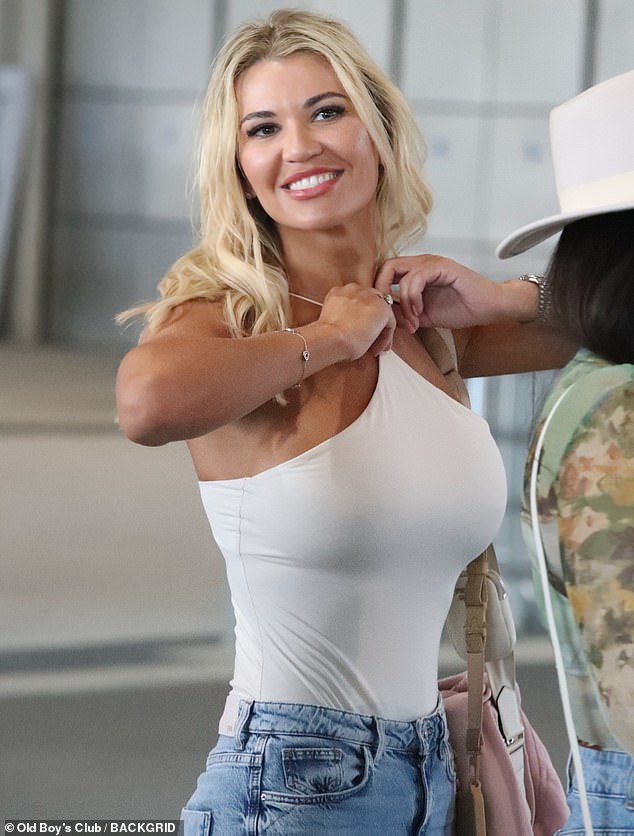 All smiles: She flashed a broad grin as she stood alongside a friend before heading into the stadium 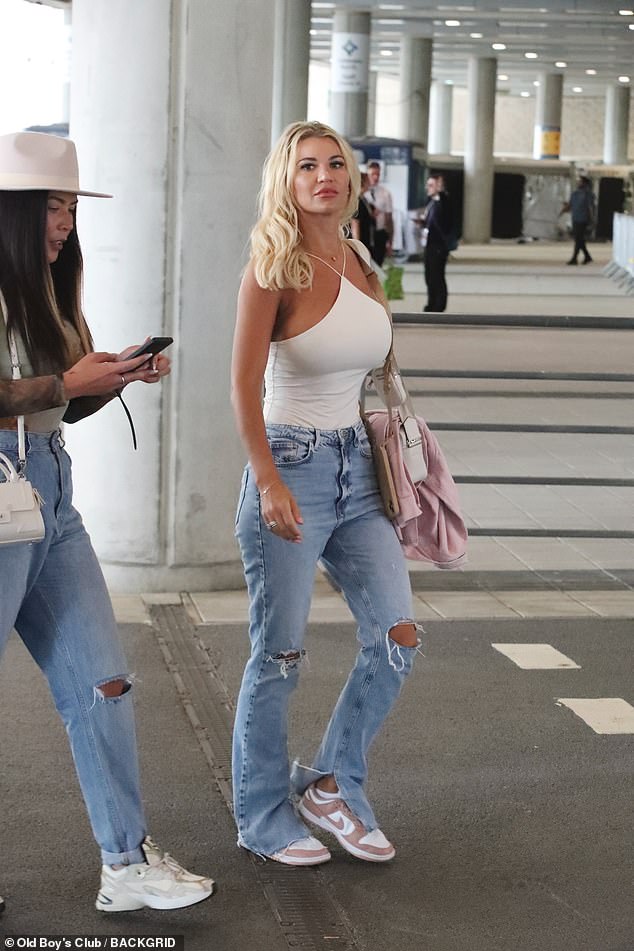 Fashion focus: She wore a pair of comfortable pink and white Nike trainers to match and opted for a glamorous palette of make-up to highlight her pretty features 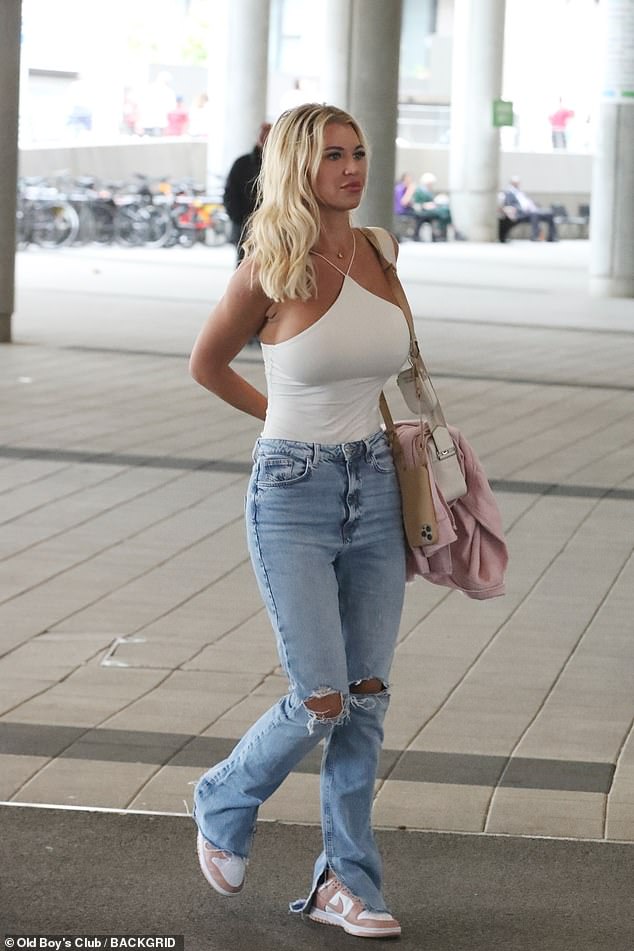 Out and about: Christine looked relaxed as she made her way into the stadium on Sunday

She wore a pair of comfortable pink and white Nike trainers to match and opted for a glamorous palette of make-up to highlight her pretty features.

Tens of thousands of fans had been seen around Wembley Stadium hours before the women’s Euros final as the nation prepared for tonight.

England’s Lionesses were the pride of Britain tonight after Chloe Kelly fired them into the history books after beating Germany at the Euros 2022 final 2-1.

Pop magic: Sporty Spice Mel C joined Christine at the event, with pop star, 48, donning one of her trademark tracksuits to watch the match 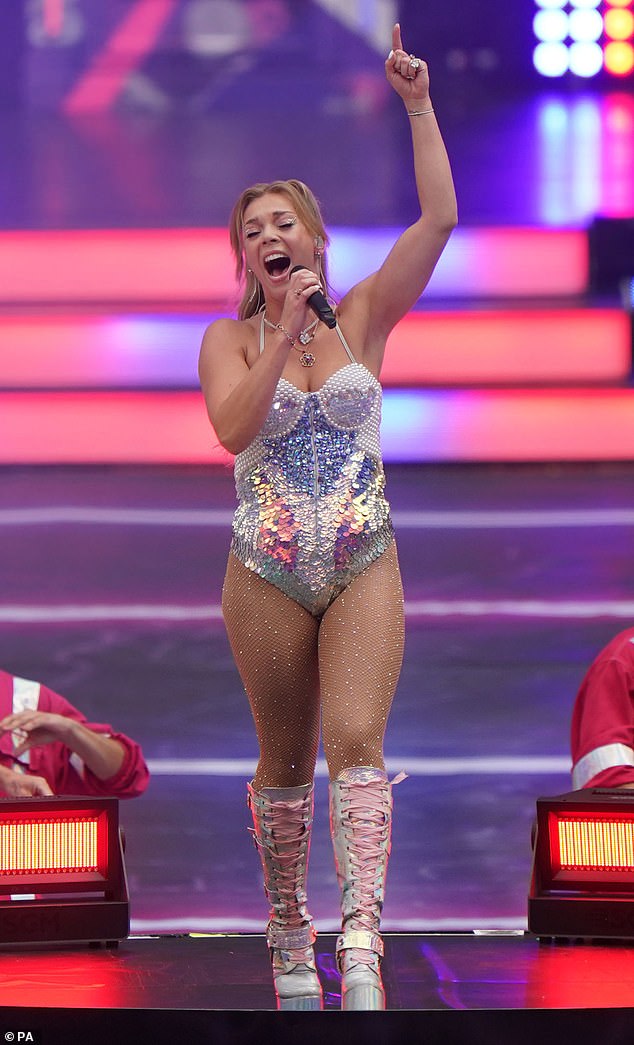 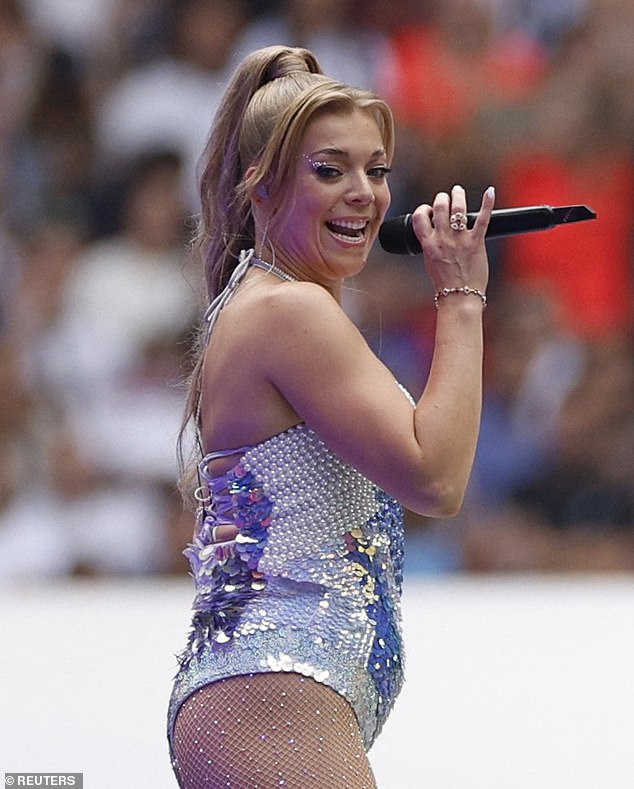 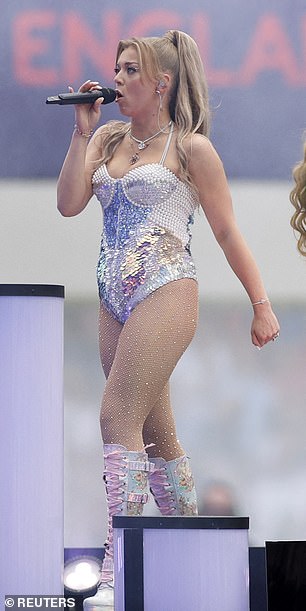 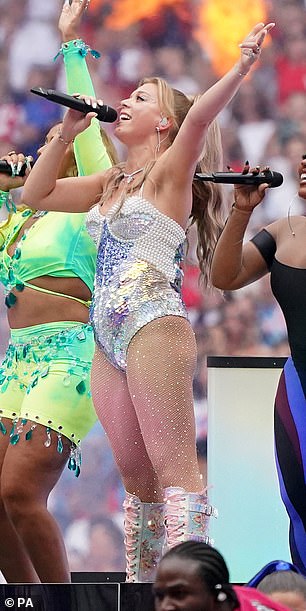 Out of this world: Continuing her look with matching knee-high boots with pink laces, she wore glittery eye-shadow and accessorised with a collection of necklaces 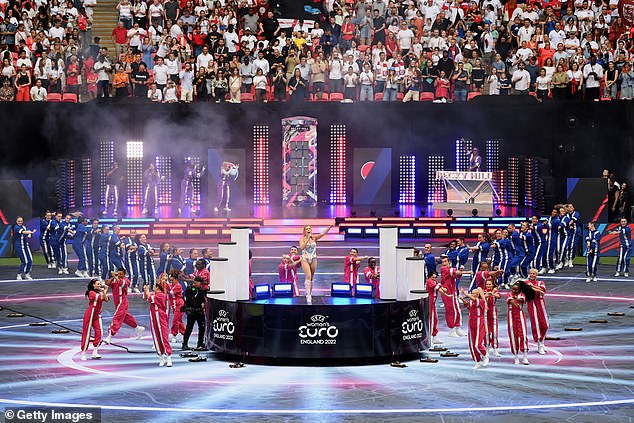 Fun: The Bewdley-native appeared to be in her element as she performed for the crowd

It had been a tense 90 minutes with flying tackles and yellow cards peppering a highly-energetic match, watched by Prince William in the crowd.

Supporters turned out in force to cheer on the Lionesses by flying England flags, painting their faces red and white and donning Team shirts to cheer on the players as they prepared to face Germany at 5pm.

Excitement was seen throughout the sea of England shirts and flags, blowing horns and clappers. 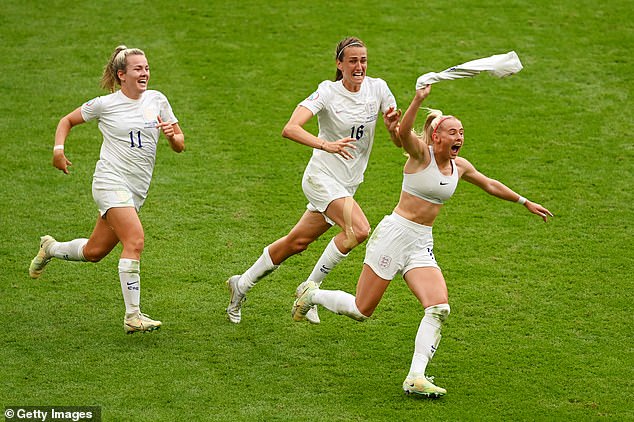 Top of the world: Chloe Kelly waves her jersey round her head after she scored the crucial winning goal with minutes to spare during the game 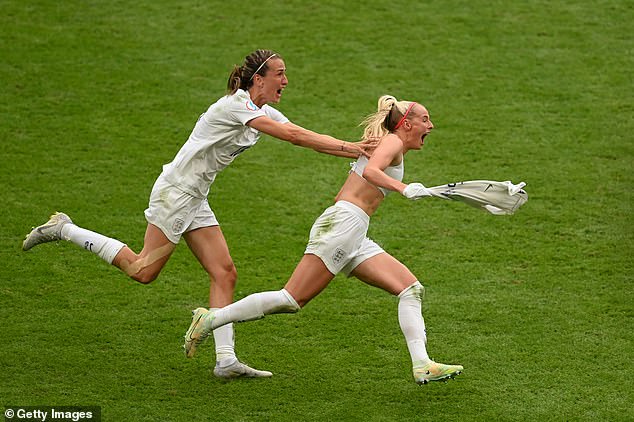 Pride of Britain: Lioness Chloe Kelly celebrates with teammate Jill Scott after the important their goal in extra time 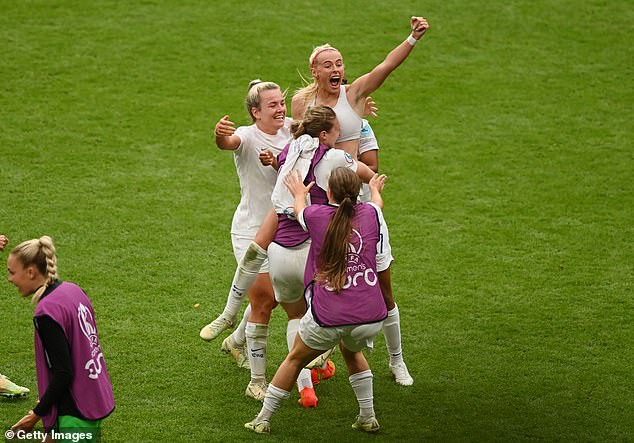 Elated: Pure joy for England as they realise the third goal has catapulted them into the history books against the German team 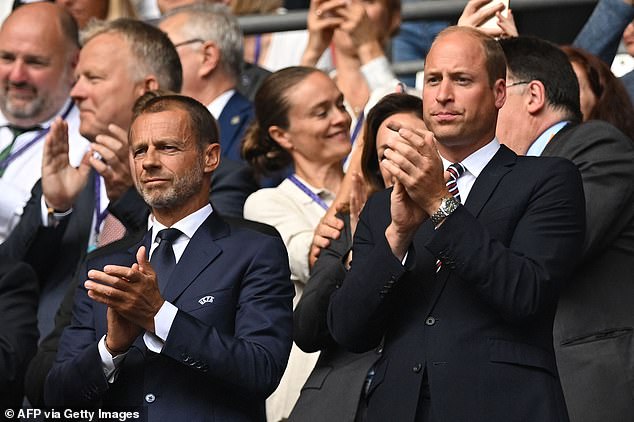 Many of those attending live and in pubs and bars and live screens set up across the country were in family groups, made up of young women and girls.

The Women’s team qualified for their first Euros final since 2009 on Wednesday night, as they demolished Sweden 4-0 at Bramall Lane.

England, who had previously never won the tournament, played their first and last final at home in 1984. 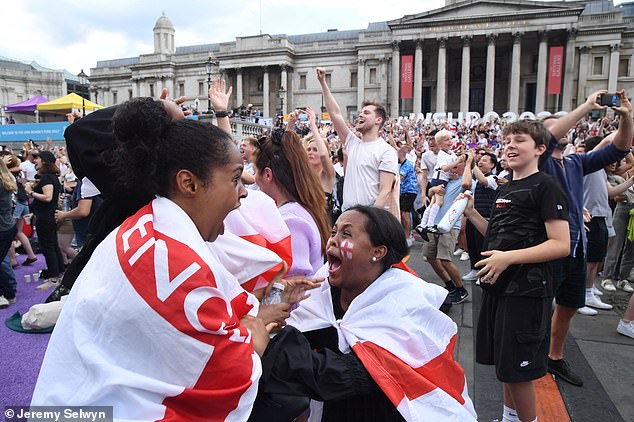 Ecstatic: Fans in Trafalgar Square scream with joy as Toone’s goal goes in and puts England ahead at last in the huge football match 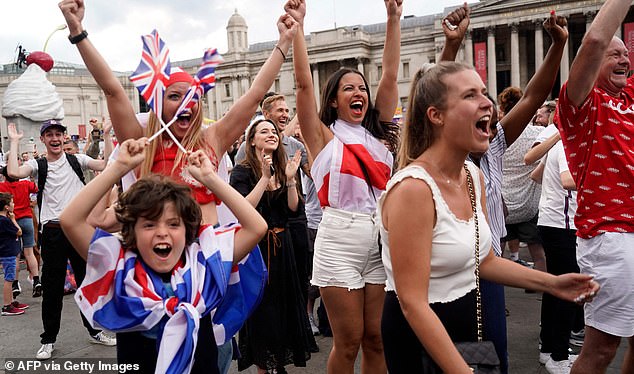 Cheers: Supporters react to England’s opening goal being shown on the big screen as they watch the UEFA Women’s Euro 2022 final football match being played at Wembley Stadium between England and Germany, at the fan zone in Trafalgar Square 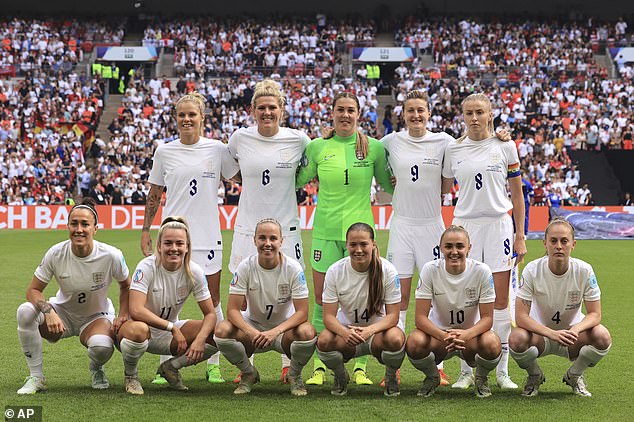 England expected: The Lionesses posed up for their team picture before kick-off the focus etched onto some of their faces

Back then, some players’ husbands were unable to join the crowd of 2,500 at Luton Town’s Kenilworth Road ground because they could not afford the transport.

The game only had halves of 35 minutes instead of 45 and a smaller ball than that played with by men was used.

It comes after Christine stepped out to the football amid her split from husband Paddy. 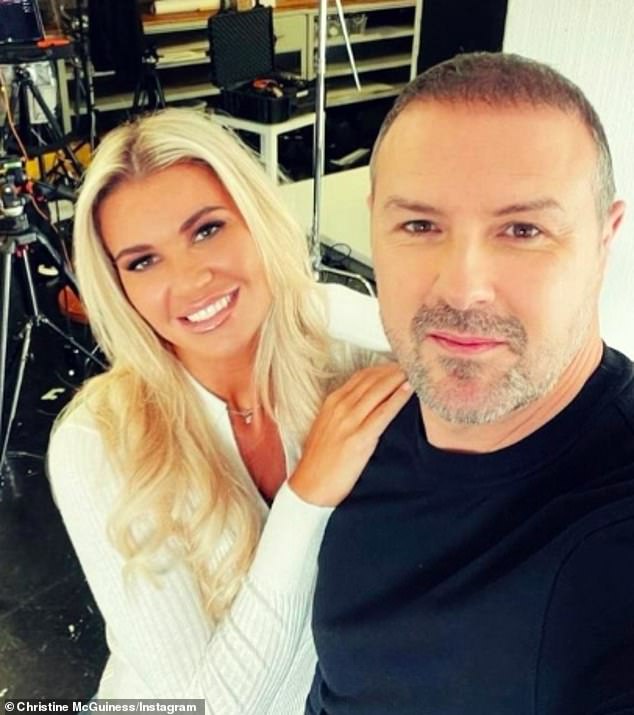 Difficult times: It comes after Christine stepped out to the football amid her split from husband Paddy

The couple have been ‘living separate lives for months’ and their June wedding anniversary was a non-event, with neither posting on social media about the occasion.

They confirmed their separation via Instagram earlier this month, but revealed they will continue living together for the sake of their three children with autism.

Christine and Paddy share twins Penelope, and Leo, eight, and Felicity, six, all of whom have been diagnosed with the developmental disorder – and they insist their upbringing remains a top priority. 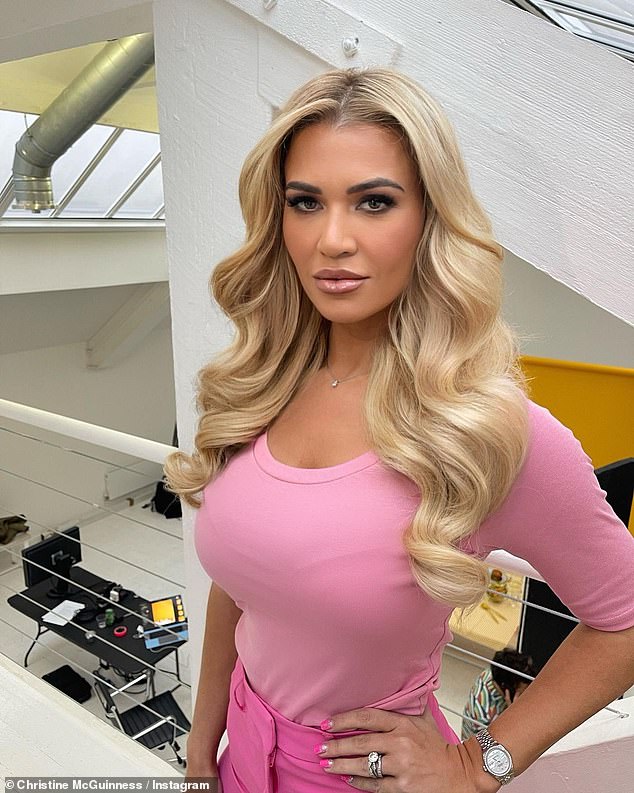 Relationship: The couple have been ‘living separate lives for months’ and their June wedding anniversary was a non-event 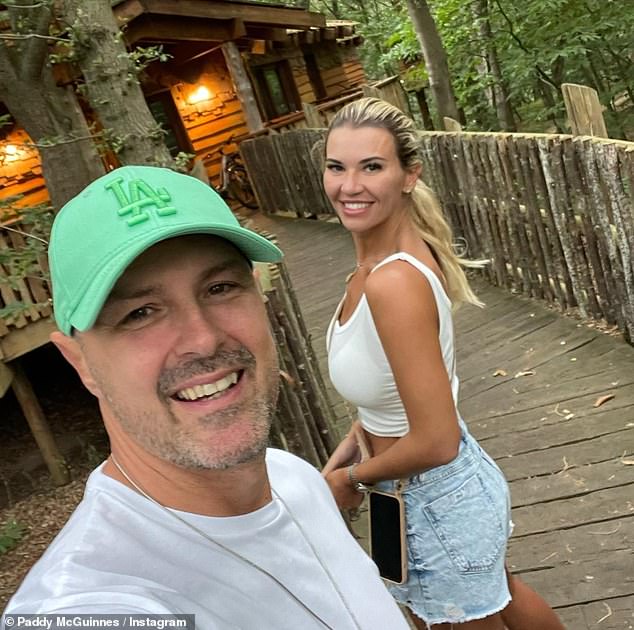 Pain: MailOnline exclusively revealed that Paddy had split from wife Christine after 11 years of marriage

Sharing a joint statement, they wrote:  ‘We hadn’t planned on sharing this publicly until we were ready but after the lack of privacy surrounding our personal life, we feel left with no other option but to clarify.

‘A while ago we took the difficult decision to separate but our main focus as always is to continue loving and supporting our children.

‘This was not an easy decision to make but we’re moving forward as the best parents we can be for our three beautiful children. We’ll always be a loving family, we still have a great relationship and still live happily in our family home together. 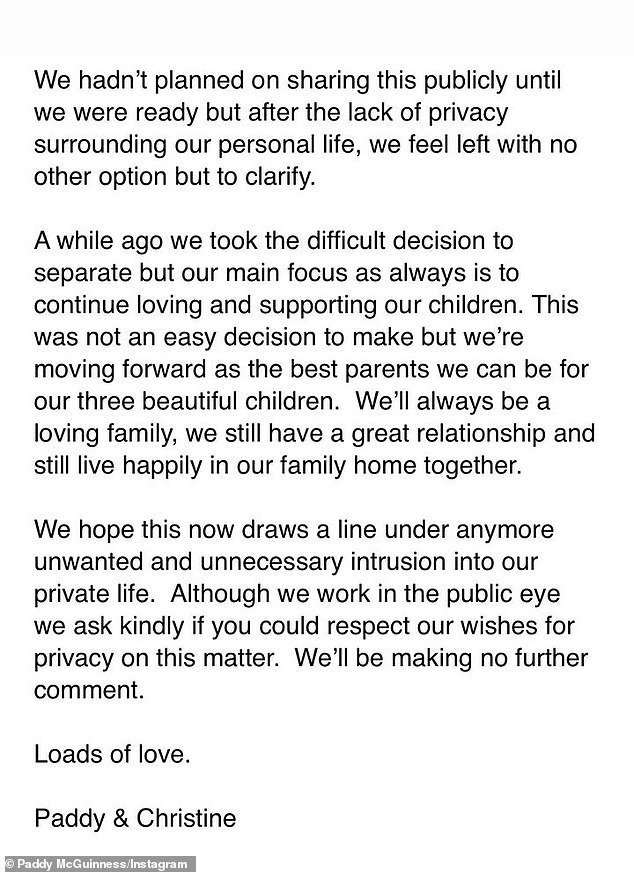 ‘Difficult’: Paddy and Christine shared joint statements on Instagram explaining they still live together in their family home and their main focus is to love and support their three children

‘We hope this now draws a line under anymore unwanted and unnecessary intrusion into our private life.

‘Although we work in the public eye we ask kindly if you could respect our wishes for privacy on this matter. We’ll be making no further comment.’

A source told MailOnline: ‘Paddy and Christine have given everything to their marriage over the years.

‘Sadly, they have made the tough decision to part ways for the sake of their young family, who they will continue to co-parent together.

‘It’s been no secret within their inner circle that it’s been a difficult few years for them as a couple but they still very much support each other and will continue to do so throughout their separation.’ 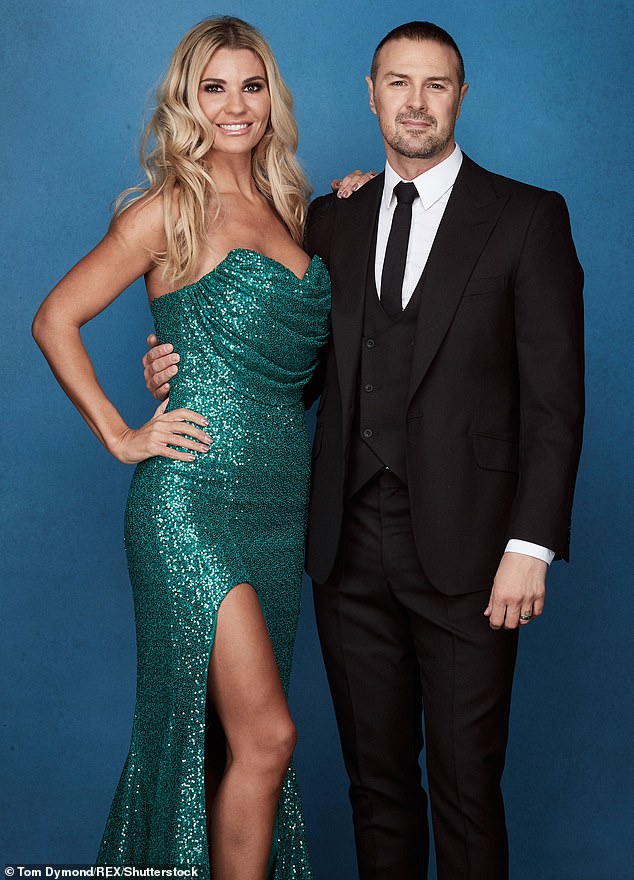 Secrets: Paddy and Christine married in 2011 before their split this year (Christine and Paddy pictured in 2019)