Girl, six, had toes and fingers amputated after a candle fire burned 70% of her body

Six-year-old Kenzie Musgrove narrowly escaped a December apartment fire with her life, but has now had endure surgery after surgery, including the amputation of half her fingers and toes.

While she was staying at her father Jared’s apartment in Indiana, downstairs neighbors knocked over a candle and accidentally set fire to their ceiling and the Musgroves’ floor.

As the apartment filled with smoke, a terrified Kenzie hid between the sofa and patio door, but the spot she went for safety was right about the source of the flames.

Her panicked father couldn’t find her, and by the time firefighters reached Kenzie, she had burns covering nearly 70 percent of her body.

Kenzie finally returned to school this month – but without the fingers and toes of her left hand and foot, she’ll have to work harder to keep up with the other children. 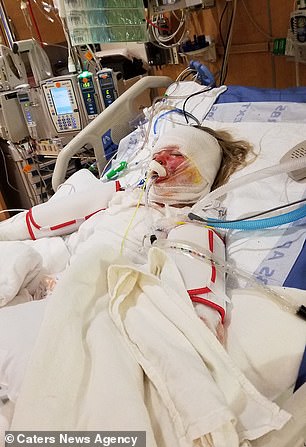 Kenzie Musgrove, six, was trapped in her father’s apartment when it caught fire in December (left). She sustained burns over 68 percent of her body and spent four months in the hospital (right) 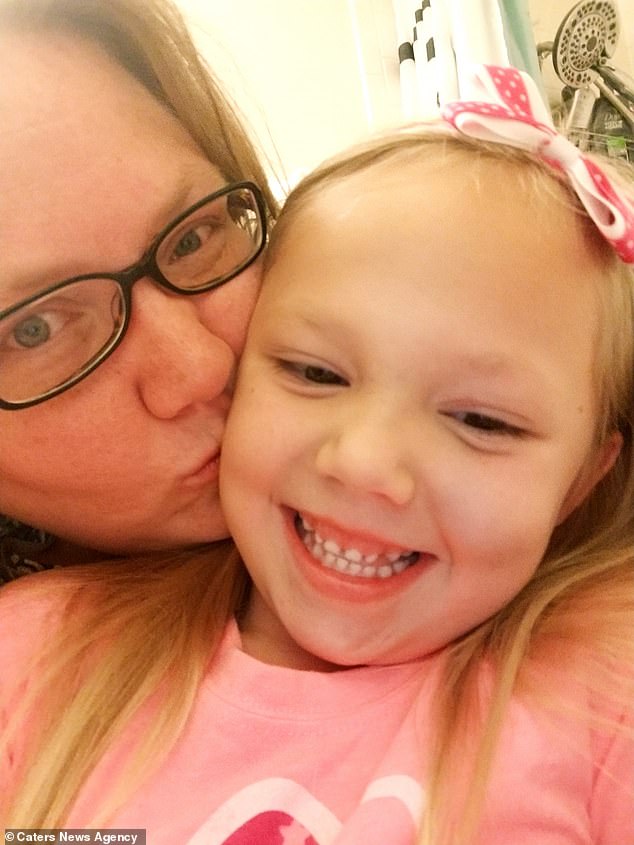 Kenzie’s mother, Jessica (left) is now warning against the dangers of candles

He raced through his home, grabbing one daughter, and his son.

Jared searched and screamed for Kenzie, but he couldn’t find her.

The smoke was getting thicker and Jared could hardly breathe or see.

Finally he fled the second floor apartment with his other two children, horrified that he hadn’t been able to find Kenzie.

It wasn’t long before emergency responders arrived on the scene and pulled Kenzie from the apartment.

She had to be taken by helicopter from Lafayette to Indianapolis, where Riley Children’s Hospital was equipped with the burn unit Kenzie needed. 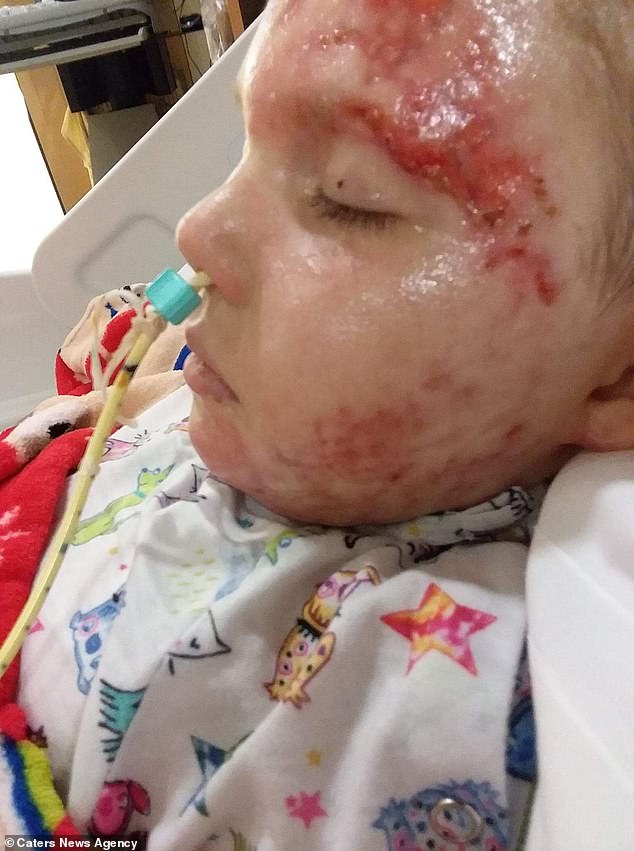 Even Kenzie’s face and scalp were badly burned, and doctors had to remove her hair 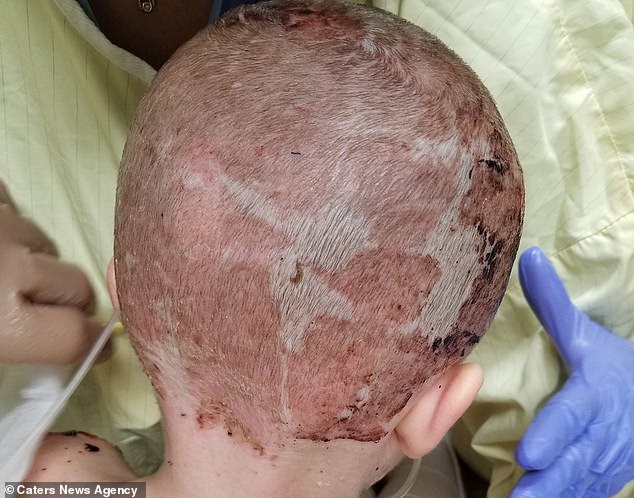 After the fire and treatment, Kenzie’s hair started to grow back in slowly 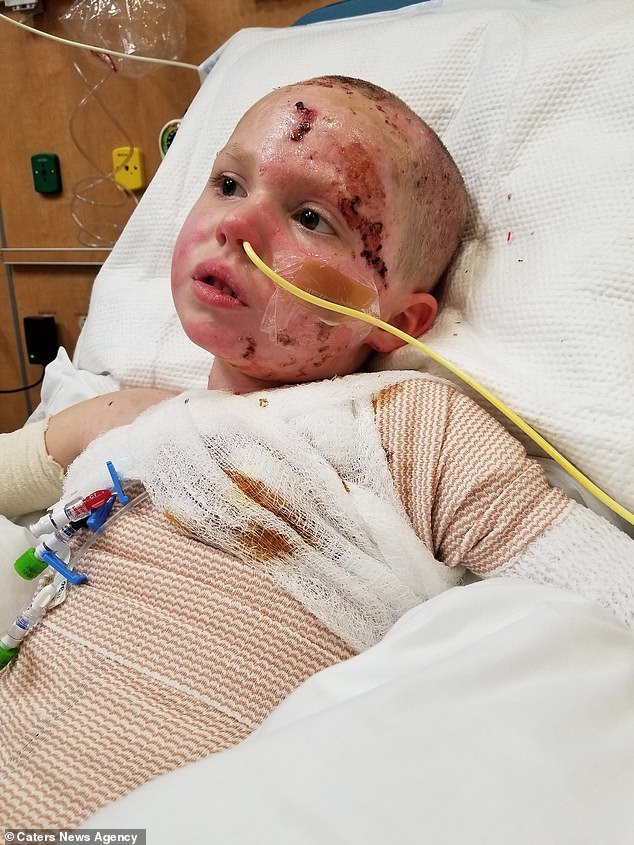 Despite her father’s desperate search and the firefighters’ quick action, Kenzie had burns covering 68 percent of her tiny body.

‘I got to the hospital as quickly as I could and as soon as I walked into the ward I knew how serious this was,’ Kenzie’s mother told The Daily Mirror.

‘She was black from head to toe and evidently in so much pain.’

In less than a month, Kenzie had to undergo four operations to repair the damage the fire had done to her skin.

Even her scalp had been burned, and treating her head meant removing her blonde locks.

Then, before the fourth surgery, on January 3, the Musgrove family got ‘the most devastating news,’ Jessica said.

Kenzie’s left fingers and toes had taken such heat, that the tissue was completely dead. Surgeons told her parents they would have to amputate them.

Burns, frostbite, infection or traumatic injuries can all cause irreversible damage to blood vessels. Without proper blood flow and oxygen, tissue starts to die, and bacteria can infiltrate deep tissues. 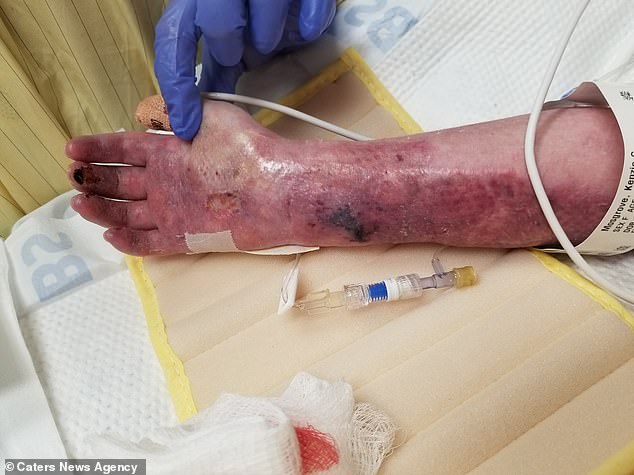 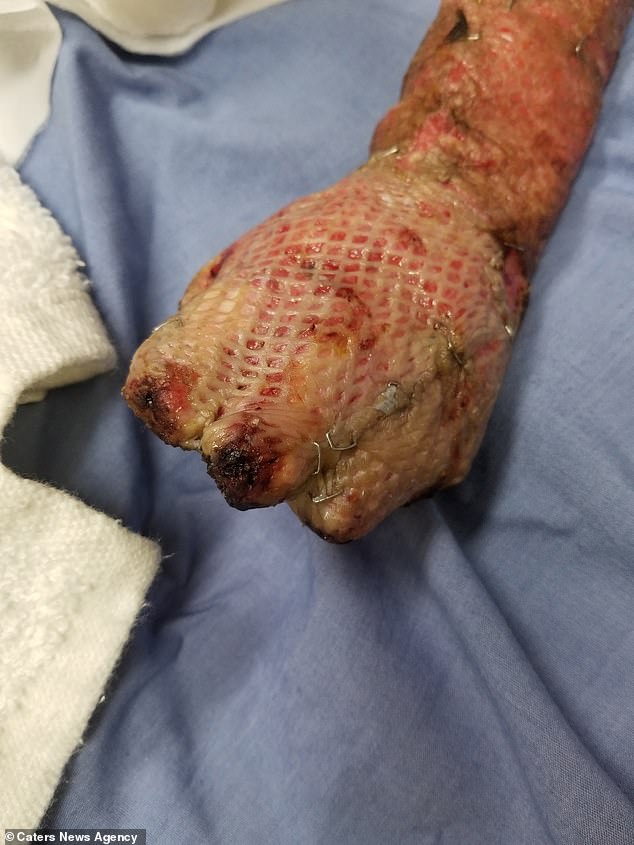 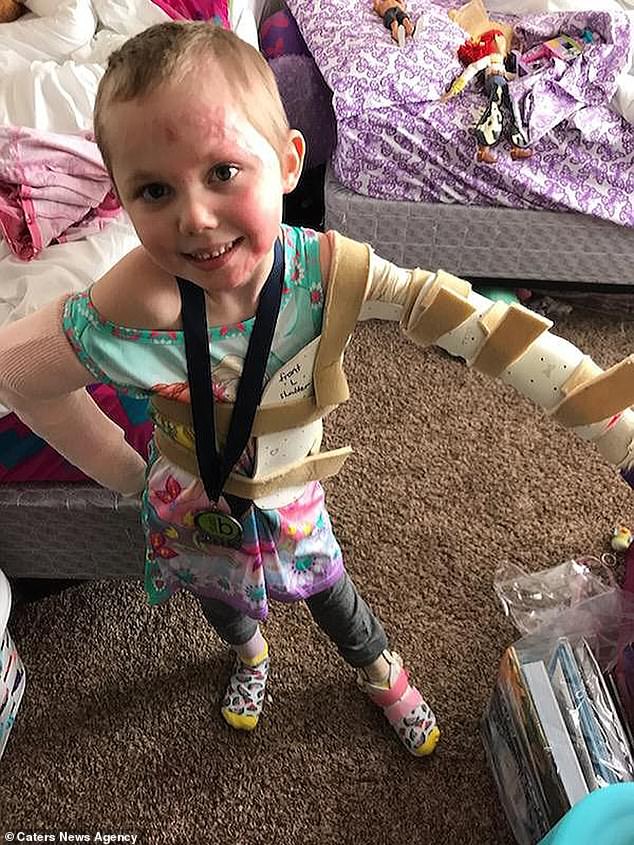 Kenzie is at last on the mend. She got to come home in March, and went back to school on April 4, but she still has to wear dressings and splints over much of her body for 22 hours a day

The condition, called gangrene, can spread to other parts of the body and do life-threatening harm.

Giving surgeons the go-ahead was heart-wrenching for Jessica and Jared, but Kenzie pulled through the surgery.

Wrapping her young mind around life without all 10 fingers and toes was a challenge for their little girl, though.

‘This was one of the hardest things for her to understand, as she suddenly woke up and couldn’t figure out where her hands and fingers had gone, which completely broke my heart,’ Jessica said.

But before the end of January, Kenzie was back on her feet, taking her first steps in the hospital.

Last month, she got to go home after four months living at the hospital, and on April 4, Kenzie went back to school for the first time since her harrowing ordeal began.

She’s made remarkable progress so far, but much of Kenzie’s body is still wrapped up and splinted for all but two hours a day.

Jessica worries for her little girl, and worries over the normalcy she’s lost.

‘She’s not going to develop like a normal girl, and her amputations will cause difficulty with every day tasks,’ Jessica told The Mirror, cautioning families against leaving candles unattended.

‘Her life is going to be altered forever,’ she added.