Girl, six, is gang-raped and strangled ‘by two brothers before their mother dumps the body

Girl, six, is gang-raped and strangled ‘by two brothers, 12 and 15, before their mother helps the attackers dump the child’s body’ in India

Two young brothers gang-raped and strangled a six-year-old schoolgirl before their mother helped to dump the child’s body in India.

The girl, who was a student in the first year of primary school in Uttar Pradesh, was playing near the accused family’s house but went missing in the afternoon.

The boys, aged 12 and 15, admitted to sexually assaulting her.

Family and police launched a manhunt when she did not return home in Uttar Pradesh’s Lakhimpur Kheri district.

This picture shows a woman holding a banner which reads ‘no means no’ during a rally to remember a woman gang-raped in New Delhi. Sexual violence against women and children in India shows no sign of stopping despite a strong stance from the government. In 2016, there were 30,000 cases of rape in the country and only one in four of them ended with a conviction

The search went on through the night and the team found her on Wednesday just 600ft from the boys’ house, Shyam Narain Singh, Station House Officer of  Phoolbehad Police Station, told MirrorNowNews.

‘The accused told us they had lured the girl into their house with a candy,’ he added.

The rapists’ mother confessed that she hid the body when she found out her two children had strangled the schoolgirl to death.

It is reported that the boys worked as rag pickers, picking up and selling rags. The mother worked as a labourer.

MirrorNowNews added that the family are members of the ‘Dalit,’ or untouchables, in India’s pervasive caste system. ‘Dalits’ often perform the most menial jobs and those of a higher caste won’t touch them due to fears of contamination or passing bad luck.

They have been charged with murder and hiding evidence. The boys have also been charged under the Protection of Children from Sexual Offences Act. 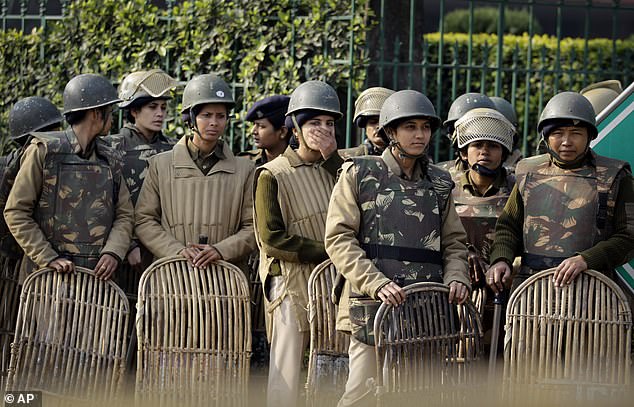 Indian policewomen can be seen above following a brutal rape and beating in New Delhi. After finding out that the boys had strangled the six-year-old schoolgirl, the mother tried to hide the evidence of the body. She later confessed to the police and the three of them now face murder and child sexual exploitation charges in Uttar Pradesh, India

The news comes during a spate of rapes on minors in Uttar Pradesh, including a 12-year-old girl who was gang-raped by six men over a family dispute about the construction of a drainage channel.

The men returned after the argument and raped the child in front of her family, beating them when they tried to intervene.

According to a recent report compiled by gender experts, India is the worst place to be a woman in the world, outranking Afghanistan and Saudi Arabia. This is due to the poor treatment of women and the high rates of sexual violence in the country.

The government has tried to tighten laws, instituting the death sentence and lengthier prison terms but it has had little effect.

Out of 30,000 rape cases in 2016, the most recent statistic, only one in four resulted in a conviction, according to Times of India.