A schoolgirl who Kate Middleton featured in her photography book has received a handwritten letter from the Duchess of Cambridge after being declared free from cancer.

Mila Sneddon, six, from Falkirk, spent two years receiving multiple rounds of chemotherapy after being diagnosed with leukaemia in November 2019.

The schoolgirl was kept away from her father Scott and sister Jodie at the height of the pandemic to stay healthy, with her story touching the nation and the Duchess of Cambridge who decided to feature her as one of 100 photos in her lockdown book, Hold Still.

Mila’s mother Lynda took to Twitter to praise Kate for sending a ‘beautifully’ handwritten letter to mark her daughter reaching the end of her treatment.

Mila Sneddon, six, (pictured) from Falkirk, received a handwritten letter from the Duchess of Cambridge after ending her cancer treatment 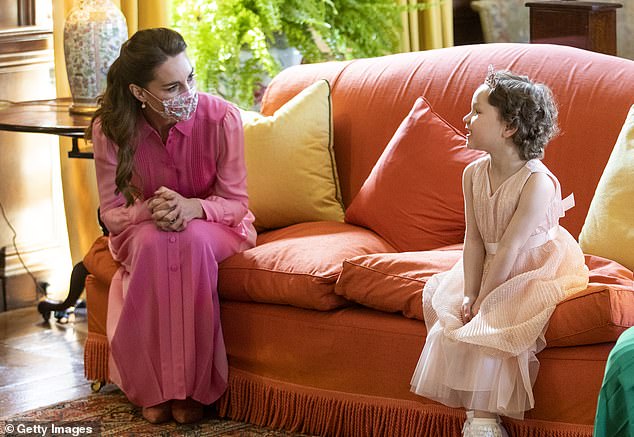 The Duchess made good on a promise she made to wear pink, Mila’s favourite colour, when they first met in person at the Palace of Holyroodhouse

Lynda shared a heartwarming photo of Mila holding the cherished letter in its envelope with a large smile.

Captioning the snap, Lynda wrote: ‘Very grateful to receive a beautiful handwritten letter from @KensingtonRoyal. Such a beautiful keepsake for Mila to look back on for many years to come (content of which will not be disclosed) such a lovely gesture thank you Catherine Duchess of Cambridge.’

Mila, whose first interaction with Kate came after she rang the bell at the Team Jack Cancer Centre in April has previously referred to the Duchess as her ‘best friend’.

She spoke to the mother-of-three, 40, on the phone prior to meeting in-person in May 2021 and was in awe when they coordinated in pink princesses dresses as discussed.

Wearing a ME+EM’s silk shirt dress with a floral face mask, Kate told the schoolgirl: ‘Hi Mila, look at you. I want to give you a big squeezy cuddle, it’s so nice to meet you in person.’

The Duke and Duchess of Cambridge shared the sentimental meeting with their almost 14 million Instagram followers. 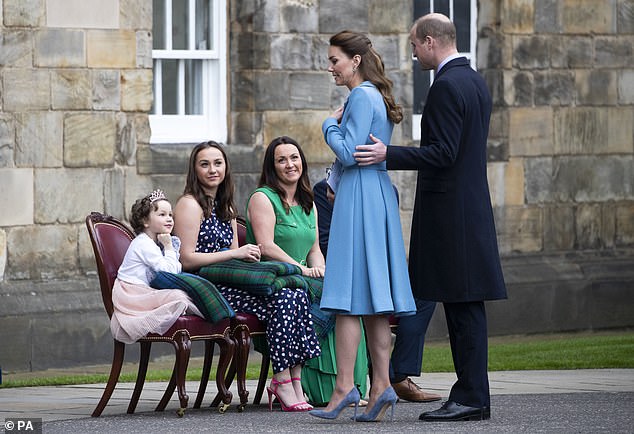 Mila went on to meet the Duchess twice last year, first at Holyroodhouse in May where she also met Prince William 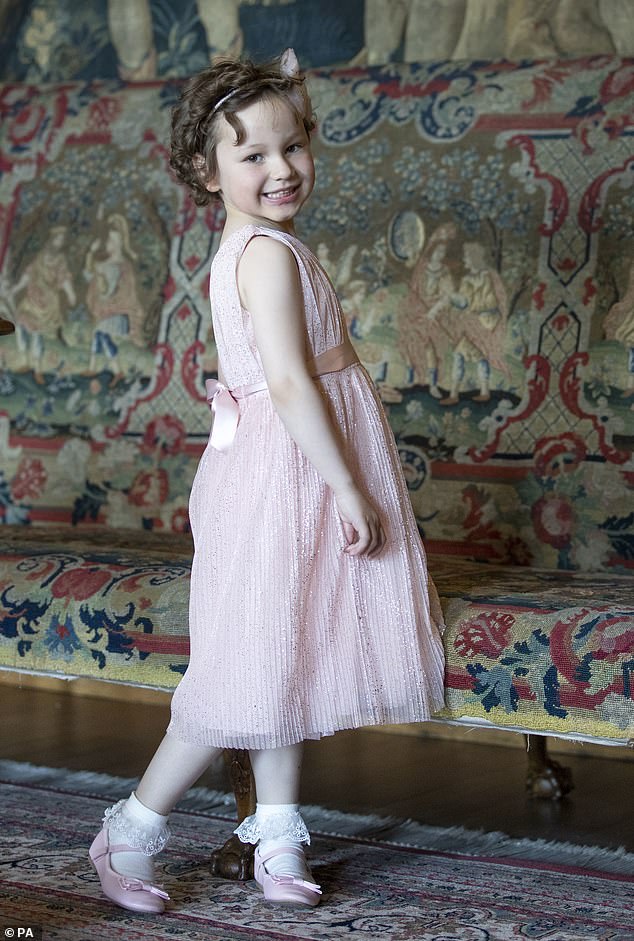 The post was captioned: ‘In the week prior to lockdown last year, Mila’s family took the difficult decision to isolate in different households to protect Mila, who at this point was only 4 months into her chemotherapy journey for leukaemia.

‘The Duchess spoke to Mila on the phone a few months ago following her image being selected as one of the final 100 for the #HoldStill2020 project – hoping one day that they’d meet and wear their pink dresses together.

‘Today, Mila and her family visited the Palace of Holyroodhouse to visit The Duchess for tea and a tour of the palace.’ 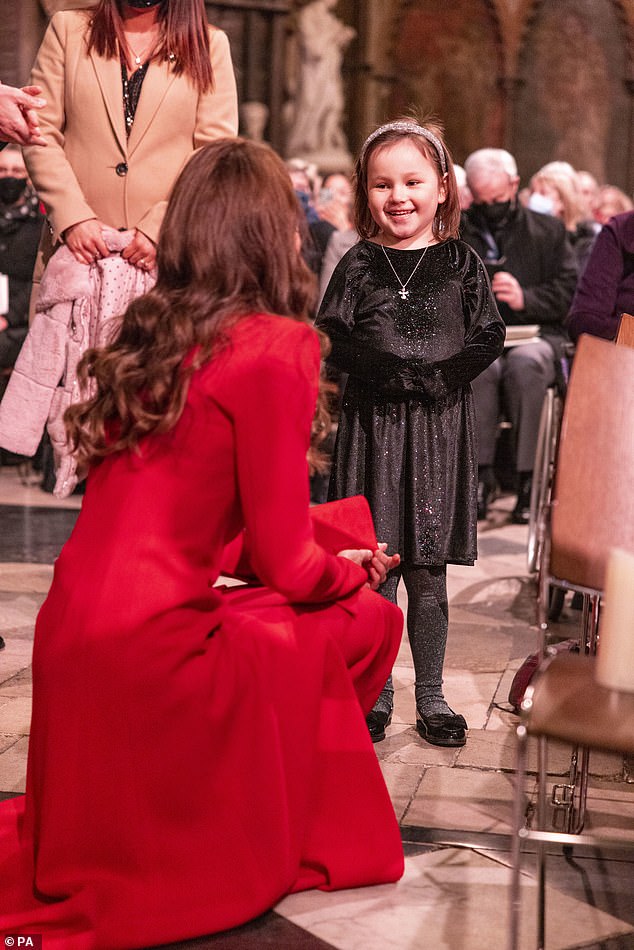 The post racked up over 4 million views, with Mila given a second chance to meet Kate and the Royal Family at the Together At Christmas community carol service held at Westminster Abbey in 2021.

The little girl’s mother said the Duchess had a ‘gentle soul’ and had made Mila feel comfortable during their meetings.

‘Those moments made Mila feel really special and it was a good distraction from her treatment.

‘Now she’s recognised as the happy little girl who met Kate Middleton and not the poor little girl with cancer,’ she added.

What are the symptoms of leukaemia in children?

Fatigue and pale skin – this is because leukaemia can cause anaemia which makes a child feel weak, tired and light-headed.

Rash – children may have small, dark spots that look like common rashes if the leukemia cells spread to the skin

Bone or joint pain – this is caused by a build up of leukaemia cells near the surface of the bone or inside the joint.

Swelling of the abdomen – leukaemia cells may collect in the liver and spleen causing them to enlarge.

Mila’s school cheered when it was revealed that she is now clear from the rare form of cancer.

‘Thinking about when I just first started my treatment. It is really hard for people to get past this far, Mila told ITV.

Mila’s letter from the Duchess comes as another mother posting under the Twitter handle @megsmi83 revealed her daughter also received a note from Kate after writing to her eldest son. 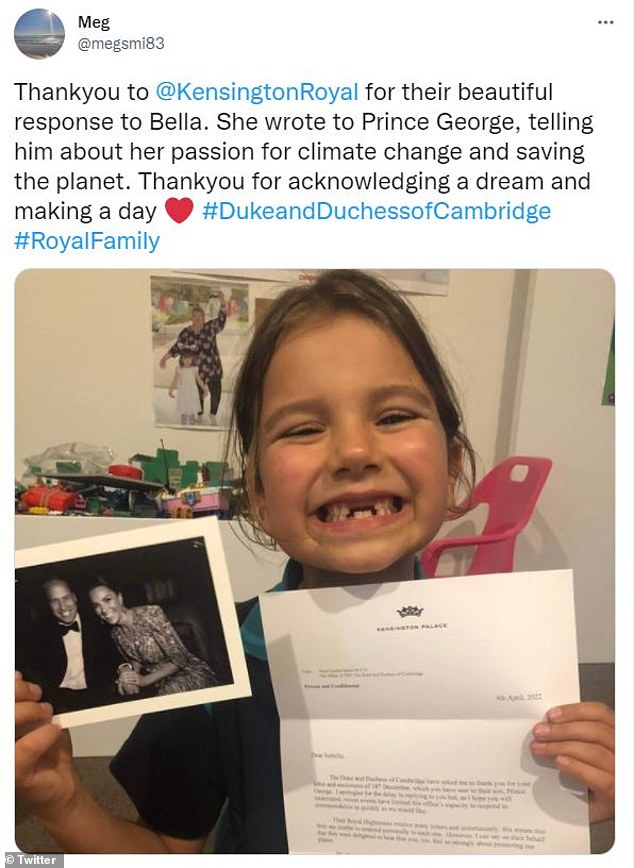 She shared a photo of her daughter Bella beaming as she held the typed letter and a snapshot of the Duke and Duchess of Cambridge.

Meg captioned the snap: ‘ Thankyou to @KensingtonRoyal for their beautiful response to Bella.

‘She wrote to Prince George, telling him about her passion for climate change and saving the planet. Thankyou for acknowledging a dream and making a day ❤️ #DukeandDuchessofCambridge #RoyalFamily’

The post has already racked up over 1,000 likes with followers praising Kate’s ‘sweet’ gesture.