Girl, two, is the only person in the WORLD to have a type of ‘Benjamin Button’ disease

A girl born with a rare genetic disorder which makes her look far older than she really is is believed to be the only person in the world with her condition.

Two-year-old Isla Kilpatrick-Screaton, from Leicester, has a unique type of mandibuloacral dysplasia.

The condition, which starts before birth, is also known as ‘Benjamin Button disease’ because it causes rapid ageing of the cells.

After recognising her illness, doctors were baffled by tests results which showed a mutation in her genes that had never been seen before.

Parents Stacey Kilpatrick, 33, and Kyle Screaton, 36, were shocked when consultants told them to ‘start Googling’ because they didn’t know much about Isla’s condition.

Weighing just 15lbs (6.8kg) at two years old and unable to talk properly, Isla communicates through sign language and the shape of her bones is distorted by the disorder.

Mr Screaton said the family have embraced her condition and he now calls her ‘grandma’ as a joke. 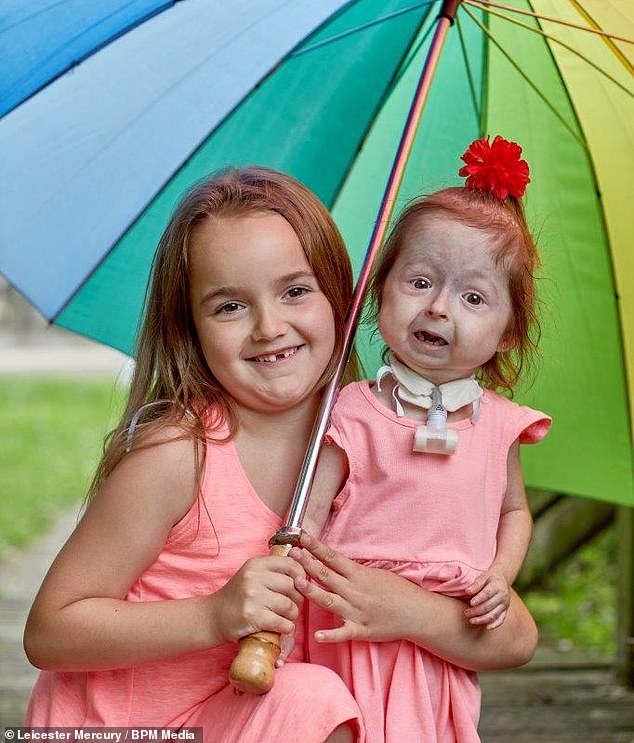 The couple face a daily battle caring for Isla, who faces an uncertain future due to a heart condition and very narrow airways which make it hard to breathe.

Isla has only just started to crawl and she can say very few words – her main form of communication is Makaton sign language.

The family have also been told to expect to see Isla’s cells age much faster than normal, which will make her look far older than she really is.

Despite her health problems, her proud mother and father say she is a happy little girl who enjoys nothing more than playing with her seven-year-old sister Paige.

Ms Kilpatrick, who quit her job as a teaching assistant to become a full-time carer for Isla, said: ‘It takes a lot out of the family.

‘When we had the diagnosis the genetic consultant said Isla is the only one in the world to have this particular misspelling of the gene which causes the mutation.

‘We were light-heartedly told to “get Googling”. Even with the rarest conditions there is a network of carriers, but we don’t even have that.

‘They couldn’t tell us how she is going to progress. No one else has the mutation of the gene which causes this deficiency.

‘There only appears to be seven examples ever in medical literature of mandibuloacral dysplasia – but none of them are this particular mutation.’ 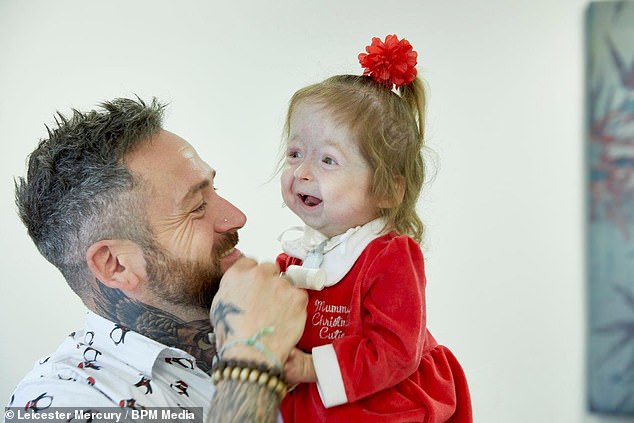 Isla’s father, Kyle Screaton, 36, said: ‘She is extremely small and frail though, I joke and call her grandma’

It was a month before Mr Screaton and Ms Kilpatrick, were able to take her home – but she was rushed back to hospital soon after when she turned blue.

She had to be resuscitated after another emergency operation when she was three months old, and it was found her tongue was blocking her airway.

She was diagnosed with mandibuloacral dysplasia in October 2017, a condition that causes problems with bone development and skin colouring.

Isla now has a 2.5mm-wide tube down her throat through which she is fed high-calorie milk.

Ms Kilpatrick said: ‘Isla makes herself understood and is very clever. She is very expressive and communicative with us and Paige.

‘She can’t cry so when she sleeps she’s attached to a heart monitor and an alarm goes off when she wakes up. This means we can sleep at night.

‘She has only just started crawling, which is late, because she’s very petite in all ways.

‘But she can walk with the aid of frame, which gives her the freedom of a child to run away from us if she wants.’

Typical effects of mandibuloacral dysplasia include a small jaw and collarbone; thin, underdeveloped skin and not much fat.

Isla has all of those and also has narrowed airways. He small jaw means her tongue is pushed back and can sometimes block her airway.

‘She is either cold or red-hot,’ Ms Kilpatrick said. ‘If she becomes badly unwell her temperature can go up to 40 degrees.

‘She sees about 12 consultants, has from one to six appointments a week and has a whole cabinet of medical records.’

Ms Kilpatrick and Mr Screaton had not been aware of any problems during the pregnancy and it was only after she born that her health issues became apparent.

Ms Kilpatrick added: ‘Once she was born and cut off the umbilical cord she couldn’t keep her oxygen level above 60 per cent when it needed to be 90 per cent.

‘The nurses were trying to keep her airways open for what felt like hours. We expected to be able to see her but she was taken to neo-natal intensive care.

‘It was so traumatic and overwhelming both of us fell asleep and when we woke up she wasn’t there.

‘We nearly lost her – she was fighting against everything they were trying to do.

‘She was incubated for the first five days of her life and put in an induced coma, so we were unable to hold her.

‘We didn’t let other daughter, who was five at the time, see her because we were protecting her.

‘Nurses had to feed her because she was losing weight. She was in intensive care for two weeks then we took her home.

‘At this point we were trying to bottle feed her through her nasal tube.

‘We had to ring an ambulance after six days because she started choking, spluttering and turning blue when we were bottle feeding her.

‘One of us would do CPR while the other held the phone. It was awful for our daughter Paige to see.

‘In hospital they managed to clear her airways and she spent another two weeks there.

It was 12 weeks before I had to take her in again when she had trouble breathing.

‘Genetic tests were done in February 2017 and her condition was finally diagnosed in October.’ 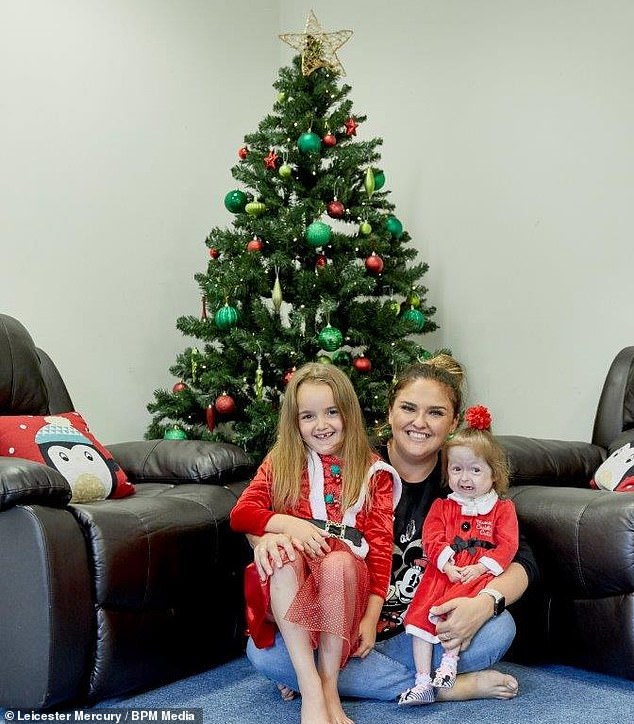 Isla, pictured with her sister and her mother, is a happy child despite her health problems, her parents say, and they have no way of knowing how her health will be in the future

Mr Screaton added: ‘We’re told her condition isn’t life-limiting but we just don’t know for sure as her case is so unique.

‘We have been left in the dark somewhat. We have been told its mandibuloacral dysplasia of which there is usually two types A or B.

‘But Isla doesn’t fall into either of these categories so we don’t entirely know where we stand. There’s not really any support available so we just take it day by day.

‘We were told part of the condition could be rapid ageing of the cells, but we just don’t know yet whether that will happen as nobody can say for sure.

‘She is extremely small and frail though, I joke and call her grandma. She really keeps us on our toes and she really is a character. We’re looking forward to Christmas.’

The family now use Rainbows Childrens’ hospice, based in Loughborough, Leics., where Isla can play with her sister Paige.

Mr Screaton, a self-employed builder, added: ‘It is just amazing being able to see Isla playing with her sister with her mum nearby.

‘Paige loves swimming and we can only go at Rainbows. The garden is amazing and beautiful in the summer.

‘I just really want to raise awareness of the disease to help Isla and other children that might have it in the future.’