A girl who was ‘locked-in’ her body woke up after her mother played piano by her bedside.

Miranda Meldrum was a talented singer and an active 13-year-old when she suffered a life-threatening brain haemorrhage in the early hours of April 25 last year.

After experiencing a severe headache, sudden hearing loss and paralysis of her arms, Miranda was rushed to Bristol Children’s Hospital where doctors performed life-saving surgery.

But the operation left Miranda, now 14, with locked-in syndrome, which occurs when a sufferer cannot move or communicate but is aware of their surroundings.

After being given just a five per cent chance of ever ‘waking up’, Miranda started singing along when her mother Stella, 52, played the keyboard at her hospital bed.

Now slowly relearning how to walk and talk, Miranda is due to go back to school next month after spending 18 months in hospital.

Miranda Meldrum nearly died when she suffered a life-threatening brain haemorrhage in the early hours of April 25 last year. Pictured before the ordeal, she was rushed to hospital after experiencing a severe headache, sudden hearing loss and paralysis of her arms 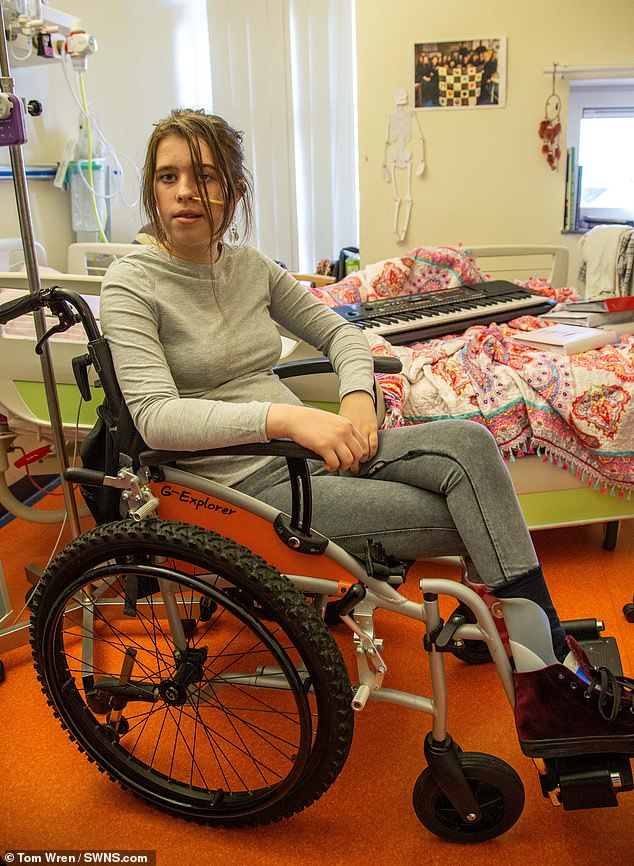 After surgery, Miranda developed locked-in syndrome, which occurs when a sufferer cannot move or speak but is aware of their surroundings. After being given a five per cent chance of ever ‘waking up’, she came around when her mother Stella played the piano at her bedside

Speaking of her ordeal, Miranda said: ‘Music has been as if someone was holding my hand the whole way through this. It’s been my sanity.

‘I could see a light at the end, I knew it was temporary. I was channeling positive thoughts, my brain wouldn’t let me think negatively

While she was in hospital, loved ones would play Miranda tunes like Evanescence’s Wake Me Up Inside, while her father John, 54, would play the guitar.

After her mother started reading letters to her daughter from her loved ones, Miranda’s eyes started flickering and her hand began to make small movements. 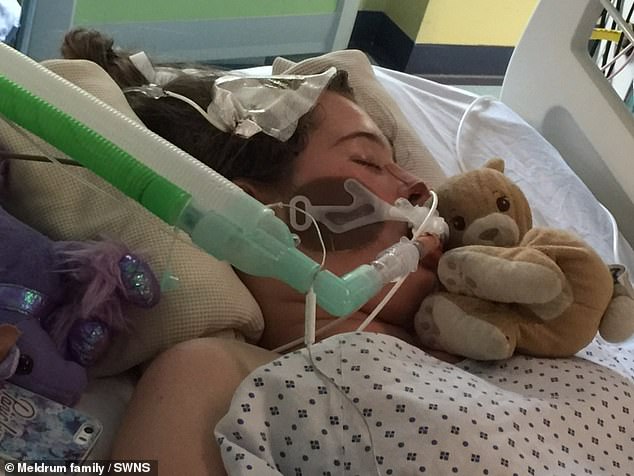 After being rushed to hospital at 4am, 20 doctors and nurses set about trying to save Miranda’s life. Her parents were told surgery may kill but she would also die without it 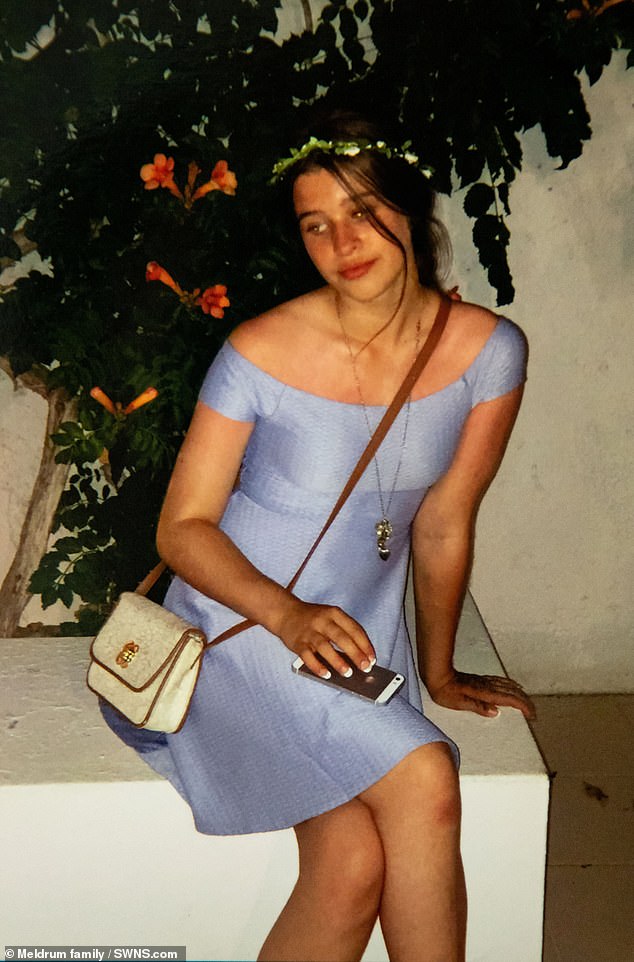 Pictured before the ordeal, Miranda was a promising student who loved her friends and music 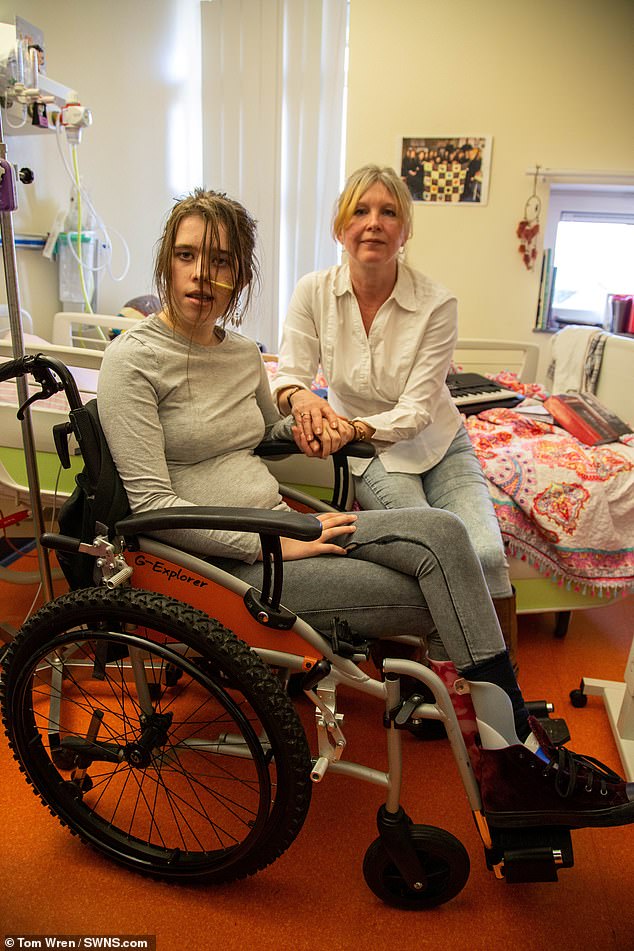 Miranda’s medic mother (pictured) claims she had never seen anything like her daughter’s ordeal in her 25 years as a doctor. After three months of playing tunes like Evanescence’s Wake Me Up, her daughter’s eyes started moving and the teenager even began to sing along

Stella, a doctor, said: ‘Some people can be locked in for years on end, some people are fine with that and some get very upset and wish they hadn’t been saved.

‘Miranda had a 95 per cent chance of remaining like that indefinitely.

‘The only thing she could do was blink the eyes. We knew she was still in there so I would play songs and Peter Kay DVDs.’

After three months, Miranda began moving her eyes and blinking.

‘Then Miranda moved onto being able to touch fingers on a keyboard and now she’s learned sign language,’ Stella said.

‘She learned sign language so quickly – I couldn’t keep up.’ 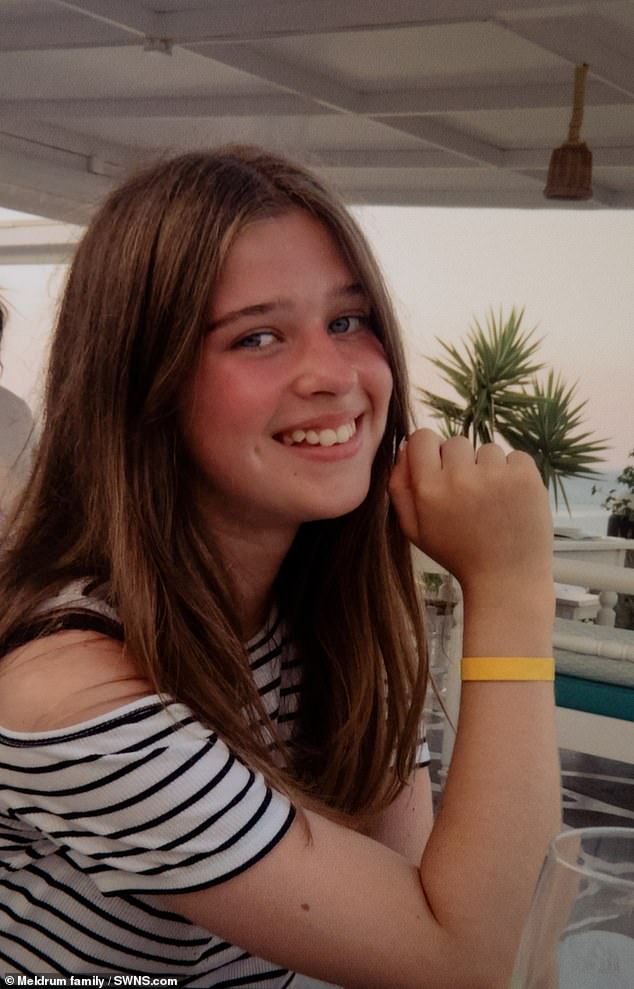 Pictured before, Miranda has learnt to communicate via sign language and has even started singing lessons again. She is looking forward to going back to school next month 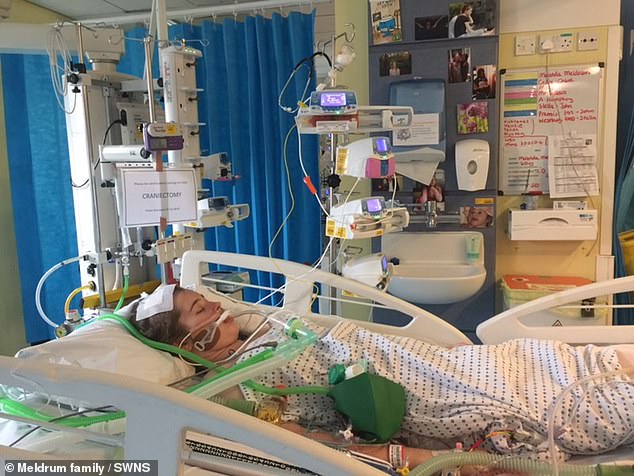 After being rushed to hospital, Stella and John watched 20 doctors and nurses work to keep their only child alive.

‘In my 25 years as a doctor I’ve seen nothing like that,’ Stella said.

‘There were 20 members of hospital staff at 4am all gowned and gloved up – the room was full.

‘A surgeon said we had to take a piece of skull from her head – “she might die during the operation but if we don’t do it she will die”, he said.

‘They took a piece of bone so they could let the blood out.’ 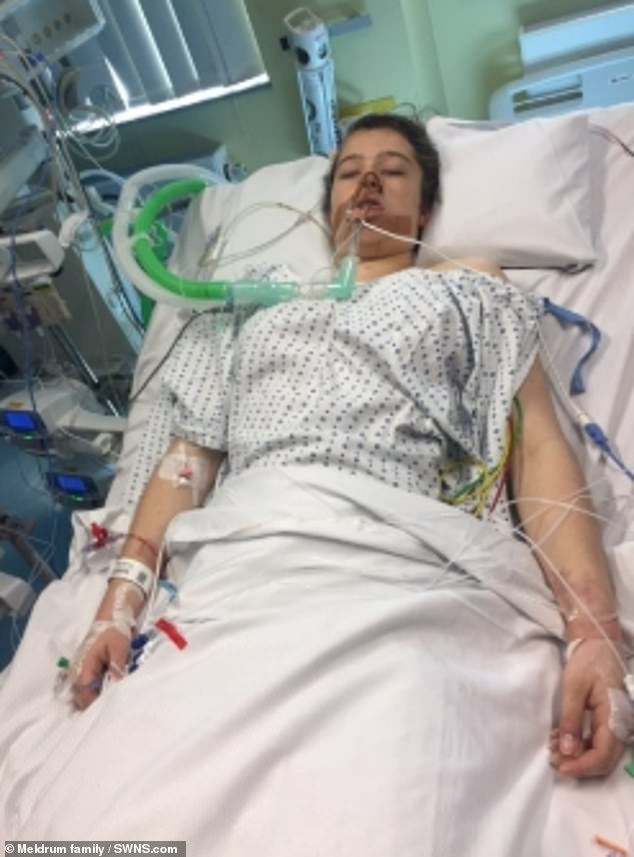 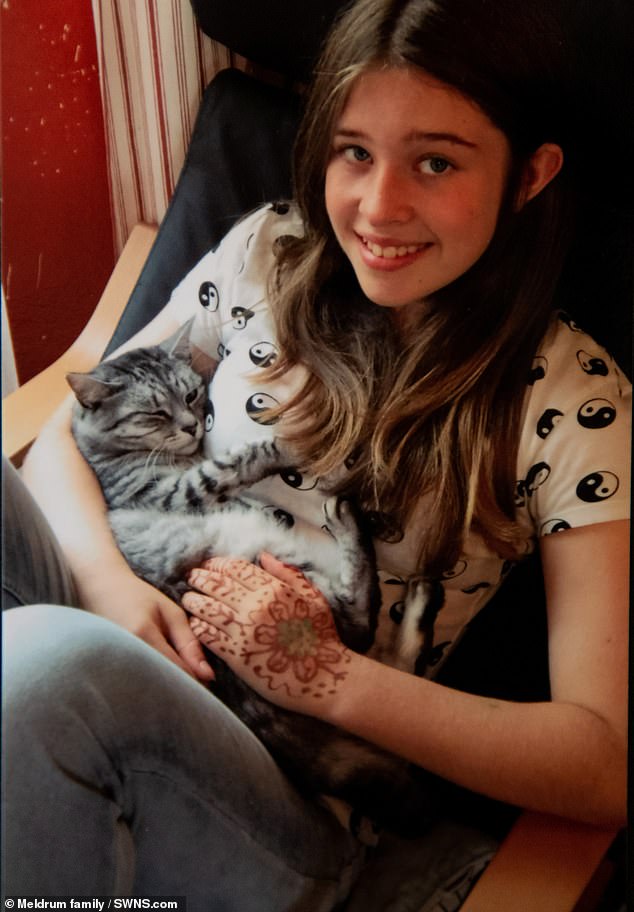 Pictured before she became unwell, Miranda says one of the most important things in her life is her cats. She claims having photos of her pets on the hospital walls helped her to recover 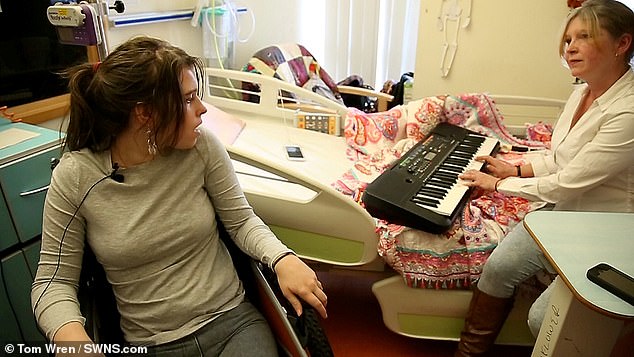 As a doctor, Stella knew her daughter may suffer from locked-in syndrome for years. Determined to help, she played the piano at her bedside regularly, while Miranda’s father John would play the guitar. Miranda claims music has been her ‘sanity’ throughout the ordeal 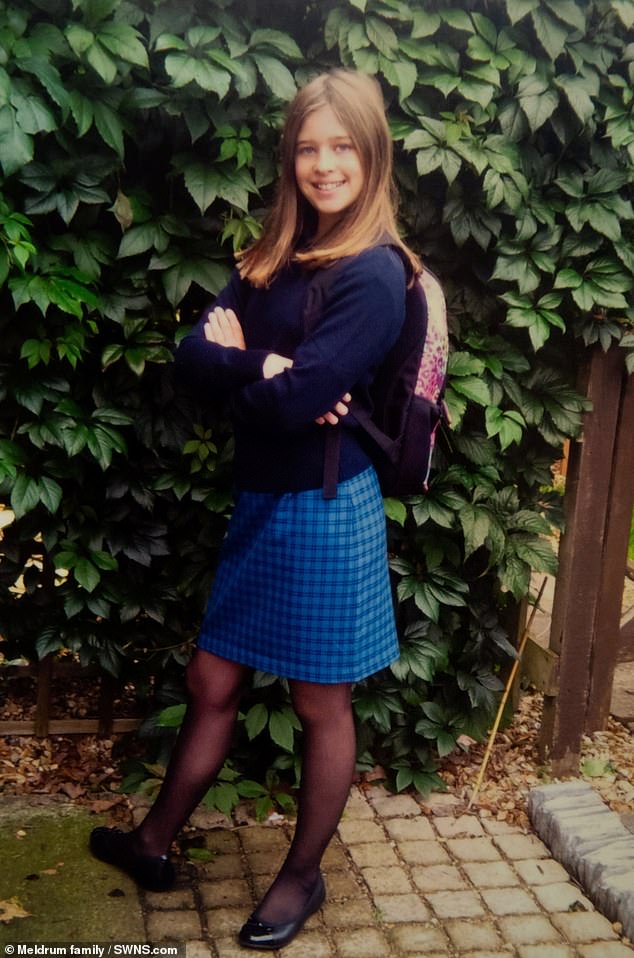 Pictured before, Miranda used to excel at art, English, drama, psychology and biology. Her family are speaking out to raise money to buy her a walker, pay for private physiotherapy sessions and covert the downstairs of their home ahead of her release from hospital

Before her haemorrhage, Miranda was a promising student who excelled at art, English, drama, psychology and biology.

Miranda, who has started singing lessons again, said: ‘The three most important things to my recovery are music, my cats and my friends.

‘I listened to music throughout and the photos on the hospital wall of my cats helped so much. I message my friends, which has helped when I’m bored.

‘The thing I miss most about my friends is the fact they get everything, they understand me telepathically and we have our own lingo.

‘I’m very excited to be going back to school.’

Stella, who has been unable to work for two years while caring for Miranda, has launched a fundraising page to pay for specialist equipment for their home.

She hopes to raise £30,000 to buy a walker for Miranda, pay for private physiotherapy sessions and convert the downstairs of their home ahead of her release from hospital next month.