A nine-year-old girl with cystic fibrosis will spend Christmas in hospital while she waits for a life-saving double lung transplant.

Ruby Walker, from Arbroath, Angus, was diagnosed with the disease when she was just two weeks old and was relying on a constant supply of oxygen by seven months.

While receiving treatment at a critical care unit in Edinburgh, she is at the top of the national ‘super urgent’ list for the operation.

Her family, who are desperate to have her home, worry ‘the window for transplant is closing’ as Ruby urgently needs a new pair of lungs.

The youngster, who is a pupil at Hayshead Primary School, has been waiting for more than two years.

Ruby Walker, nine, will spend Christmas in hospital while she waits for a life-saving double lung transplant. The cystic fibrosis sufferer is pictured at home in Arbroath, Angus, in 2016 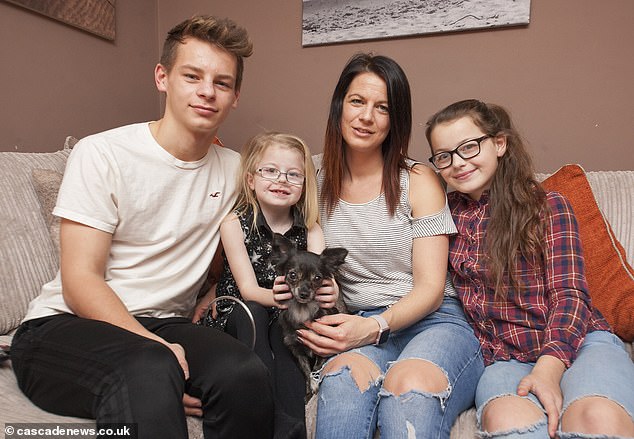 Her family are desperate to have her home and worry ‘the window for transplant is closing’. Pictured in 2016 is Ruby’s brother James, mother Diane Boyd and sister Emileigh Walker

Ruby’s mother Diane Boyd, said: ‘Unfortunately this Christmas Ruby won’t be able to sit next to our Christmas tree as she will remain in the critical care unit in Edinburgh.

‘Ruby is really not having the best time just now and we feel like the window for transplant is closing and the need for a donor is now ever so urgent.’

The youngster’s condition seemed to be manageable until she caught a virus at seven months. This led to a secondary infection that damaged her lungs and left her dependent on oxygen.

Things then took a turn for the worse in October 2016 when doctors discovered her lung function had dropped to just 35 per cent – a healthy person uses a maximum of 70 per cent.

Ruby’s family hoped she would have a transplant earlier this year, however, for unknown reasons, the operation did not go ahead.

She was then added to the super urgent transplant list as her health deteriorated – causing her to become a top priority nationwide.

Things took a turn for the worse earlier this month when Ruby suffered a collapsed lung that almost left her in a coma. It was caused by her having too much carbon dioxide in her body.

She was then transferred to intensive care in Edinburgh where she was given ventilation.

CF is a life-limiting condition caused by a faulty gene found in one in 25 people. It affects many parts of the body – including the lungs and digestive system – by clogging them up with a thick, sticky mucus.

The condition affects around 10,400 people in the UK, according to the Cystic Fibrosis Trust. Some 30,000 suffer in the US, Cystic Fibrosis Foundation Patient Registry statistics show.

A lung transplant is an option for patients who are not responding to standard treatment, such as medication and physio.  The average wait for the operation is 18 months, according to the Cystic Fibrosis Trust.

At least 346 people are waiting for a call to say a new pair of lungs are ready for them, NHS figures revealed this month. 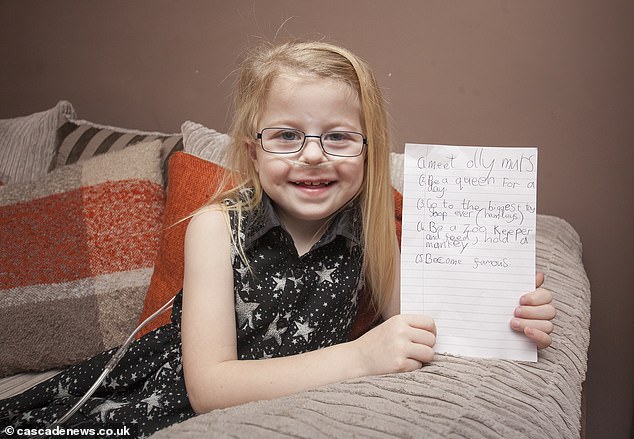 Ruby Walker was diagnosed with cystic fibrosis when she was just two weeks old and has relied on a constant oxygen supply for most of her life. She is pictured in 2016 with her bucket list 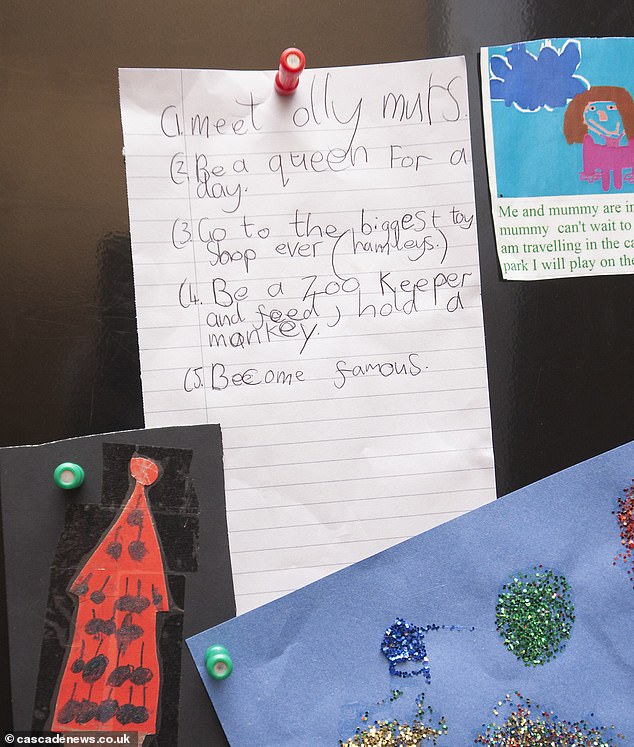 At the top of Ruby’s bucket list was to meet Olly Murs, which she did last year

Ruby has previously been in the press when she wrote a bucket list in 2016, which included ‘being a queen for a day’, ‘going to the biggest toy shop ever’, ‘becoming famous’ and ‘being a zoo keeper’.

She even met her idol Olly Murs backstage when he performed in concert at the SSE Hydro in Glasgow in 2017.

After the decision was made in Wales two years ago, figures showed an immediate rise in the availability of organs.

Between December 2015 and June the following year, half of the transplants in Wales came from patients whose consent had been deemed.

But critics hit back and warned that there is a lack of proof that an opt-out system actually helps to increase the number of donor organs.

Spanish officials implemented the system in 1979 and saw rates of donor organs increase after 10 years, the BBC reports.

But Sweden, which adopted a similar scheme 20 years ago, still has one of the smallest stocks of donor organs in Europe.

Many organ donation opportunities are lost every year because families do not know if their loved one wanted to be a donor or not.

A new opt-out system for organ donation is planned in England by 2020, where adults will be presumed to be organ donors unless they specifically record their decision not to be.

One in ten patients are estimated to opt out, research by the University of Stirling suggested, which is promising considering that figures show fewer than 5,000 people die in circumstances where organ donation is possible.

Under the proposed opt-out system in England, family members are still given a final opportunity to not go ahead with the organ donation.

Scotland has plans to introduce an opt-out system and Northern Ireland has also expressed an interest.

What is cystic fibrosis?

‘Cystic fibrosis is a genetic disease that causes persistent infections in the lungs and limits one’s ability to breathe over time.

A defective gene causes a thick, sticky buildup of mucus in the lungs, clogging airways and trapping bacteria that leads to infections, lung damage and eventual respiratory failure.

Mucus buildup also occurs in the pancreas, preventing the release of digestive enzymes that allow the body to break down food and absorb vital nutrients.

CF is typically diagnosed in infancy and has a life expectancy rate of 37 years old.

There are approximately 30,000 cases of CF in the US, with roughly 1,000 new cases diagnosed each year.’