Girl with omphalocele goes home after 650-days in hospital

A toddler went home for the first time on Tuesday after spending the first 650 days of her life in the hospital.

Naomi Hawks was born 21 months ago in Omaha, Nebraska, with a rare abdominal birth defect omphalocele.

The defect means that her intestine and liver never returned to the abdominal cavity while she was developing, and instead developed in a sac outside of her body.

The condition is associated with 25 percent infant mortality rate, which is very high, and doctors didn’t think she would live to see her first birthday.

‘The doctors didn’t expect her to live to be one,’ Naomi’s mother Mandy told WCVB.

‘She’s amazing. She taught me what it means to be brave.’

Naomi Hawks was born 21 months ago in Omaha, Nebraska, with a rare abdominal birth defect omphalocele

Omphalocele is a rare abdominal wall defect that occurs in unborn infants.

The condition causes the instines and liver, and sometimes other organs, to remain outside of the abdomen in a sac.

It happens because those organs fail to return back to the abdominal cavity in the ninth week of prenatal development.

The condition occurs in about one in every 4,000 birth, and is associated with a 25 percent rate of birth mortality and severe malformations.

It’s normal for intestines to protrude from the abdomen into the umbilical cord until about the tenth week of pregnancy. 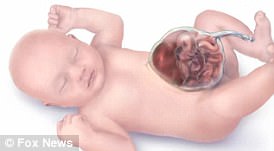 Naomi and her twin Hannah were born prematurely, but unlike her twin, Hannah was able to go home after a few days in the hospital.

The toddler has spent the first 650 days of her life at the Children’s Hospital and Medical Center in Omaha, with her parents visiting every day.

The extremely rare condition requires Naomi to breathe through a ventilator because her lungs were not fully developed at birth.

One of the most common causes of mortality during birth in children both with omphalocele is that doctors aren’t able to tell how developed the lungs are.

‘One, her intestines are outside the body and the second is that her lungs are too small.

‘Multiple occasions she has been on deaths door literally and yet she pulls through it.’

Though it’s been difficult, her parents have been able to adjust to shuttling between their jobs and the hospital to visit Naomi.

‘We come up here and I usually do Naomi’s dressing on her omphalocele in the morning, get her dressed, get her teeth brushed, hair brushed, and then the girls play and I hang out,’ Mandy explained.

They also return every night to put Naomi to bed.

‘This is our normal, so we don’t know anything else,’ the mother said.

‘We became parents because we wanted to be parents and take care of our kids. We figured out how to do it, even in the hospital.’ 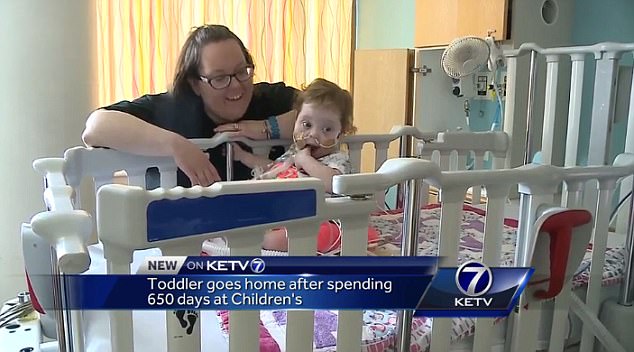 On Tuesday, after a 650-day stay in the hospital, Naomi was finally able to go home to live with her parents and twin sister Hannah. She is pictured with her mom, Mandy

But now that normal has changed, because Naomi was finally allowed to leave the hospital on Tuesday.

‘It kind of hasn’t sunk in yet,’ Mandy said, ahead of taking her home.

‘She’s got a testimony that is just going to blow people away. Her life is already a legacy, I think.’

The family isn’t done with regular hospital visits, though, as Naomi still needs support from a ventilator so her lungs can develop more.

When they are more developed doctors will consider a surgery to reverse her omphalocele. They will probably start looking at that option when she is three, Mandy said, and it could take years for them to complete the process.