Proteus syndrome is a rare condition with an incidence of less than one in 1million people worldwide.

Only a few hundred affected individuals have been reported in the medical literature.

It is characterized by overgrowth of the bones, skin, and other tissues.

Organs and tissues affected by the disease grow out of proportion to the rest of the body.

The overgrowth is usually asymmetric, which means it affects the right and left sides of the body differently. Newborns with Proteus syndrome have few or no signs of the condition.

Overgrowth becomes apparent between the ages of 6 and 18 months and gets more severe with age. 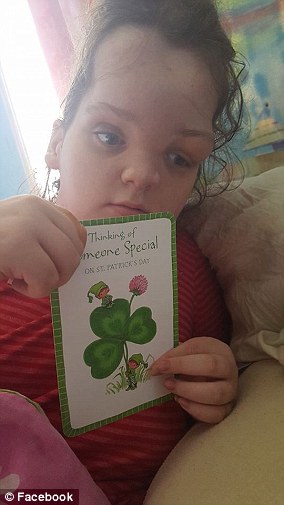 Proteus syndrome is a rare condition with an incidence of less than one in 1million people worldwide. Pictured: Sufferer Tori Punch from Queensland, Australia

In people with Proteus syndrome, the pattern of overgrowth varies greatly but can affect almost any part of the body. Bones in the limbs, skull, and spine are often affected.

The condition can also cause a variety of skin growths, particularly a thick, raised, and deeply grooved lesion known as a cerebriform connective tissue nevus.

This type of skin growth usually occurs on the soles of the feet and is hardly ever seen in conditions other than Proteus syndrome. Blood vessels (vascular tissue) and fat (adipose tissue) can also grow abnormally in Proteus syndrome.

Some people with Proteus syndrome have neurological abnormalities, including intellectual disability, seizures, and vision loss.

Affected individuals may also have distinctive facial features such as a long face, outside corners of the eyes that point downward, a low nasal bridge with wide nostrils, and an open-mouth expression.