Girlfriend is lost for words after her boyfriend’s mum bakes her a VERY unusual cake for her 18th birthday: ‘She definitely hates you’

A woman was at a loss for words after receiving a very unusual 18th birthday cake from her boyfriend’s mother.

Lana, from the United Kingdom, shared a picture of what looked like a humanoid fondant spoon in a popular Facebook group dedicated to cakes with ‘threatening auras.’

The spoon was later identified by commenters as Spooky Spoon from the children’s television series Numberjacks.

Spooky Spoon is described as ‘mean,’ ‘bossy,’ and ‘cruel.’ The spoon’s theme song reveals that she holds a high opinion of herself and finds comfort when those around her are uneasy.

What do you think of this cake?

The post received thousands of engagements and hundreds of comments, with many similarly unsure what to make of the situation.

‘So, she sees you like a spoon,’ started one woman. ‘But why is the number ‘1’ SO much bigger than the number ‘8’ and all the letters in your name?’

She continued, ‘there is so much to psychologically unload here – and the pearls, why would a spoon wear pearls, yes there is much to divulge and investigate here, don’t go anywhere we’ll get to the bottom of this…’

‘Well that’s just rude,’ said another. ‘Unless you are, indeed, a bald and angry spoon.’

But others were extremely caught up on the details of the cake.

‘The level of technical skill paired with the stylistic choices here is my favourite part,’ shared one woman. ‘The amount of attention and care that went into rendering the eyes not just with eyelids, but also makeup, paired with a dissatisfied red spoon is pretty great.’

She added, ‘I also appreciate the efficiency and respect for everyone’s time by not bothering with a “happy birthday” – just your name and age. It’s on everyone else to keep up.’

Another said, ‘I actually like the clean lines and primary colours of this. Smooth. First impression is a sturdy and determined feminized spoon. She is Lana. She is 18 and that is all. No frills … and will soon be a claymation show streaming on Netflix in the Spring.’ 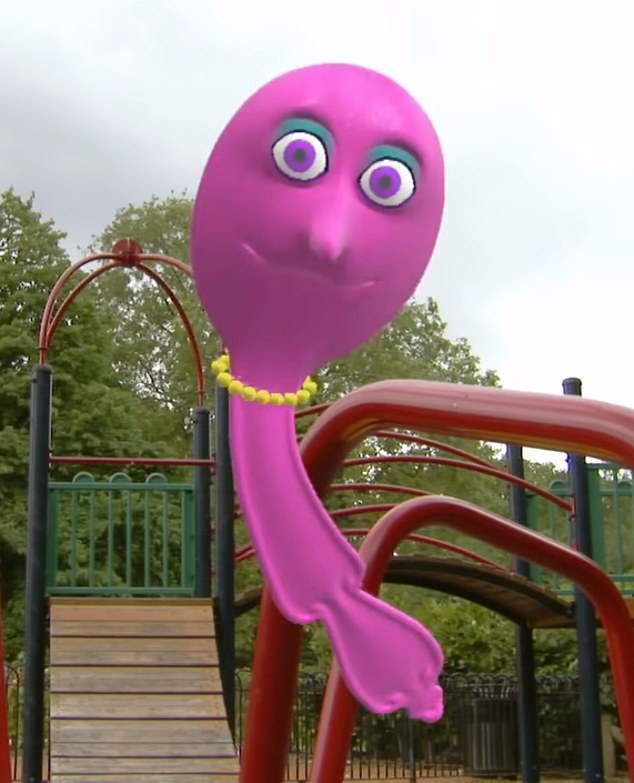 Spooky Spoon is described as ‘mean,’ ‘bossy,’ and ‘cruel.’ The spoon’s theme song reveals that she holds a high opinion of herself and finds comfort when those around her are uneasy

One was brave enough to ask the question many were quietly pondering.

‘Wikipedia has nothing nice to say about Spooky Spoon. Do you and his mum get along?’

Before the comment section was aware of the existence of Spooky Spoon, many were confused about the choice of caricature.

‘I thought she imagined you like this … I don’t even know who Spooky Spoon is.’

‘This looks like the cake your grandmother bakes you after you get your first period.’

But many more did not have such in-depth thoughts.

‘I love it and hate it at the same time.’